With an extra year of development time, has Yukes created the ultimate MMA experience?

A perfectly tuned striking system, a much more intuitive and engaging ground game, a deeper career mode, and improved online play. These are just a few of the improvements series developer Yukes brought to this installment of the UFC: Undisputed franchise. That's not to say that there were not a few missteps as well. The new submission mechanics are quite possibly the worst idea I've ever seen implemented into a video game. It's nothing that Yukes couldn't have fixed though, and it's a shame that they will never get the chance. 2012 saw THQ lose the rights to publish UFC games to Electronic Arts. One would assume this means that Yukes' work on MMA fighters, with the UFC logo on the box at least, has come to an end. 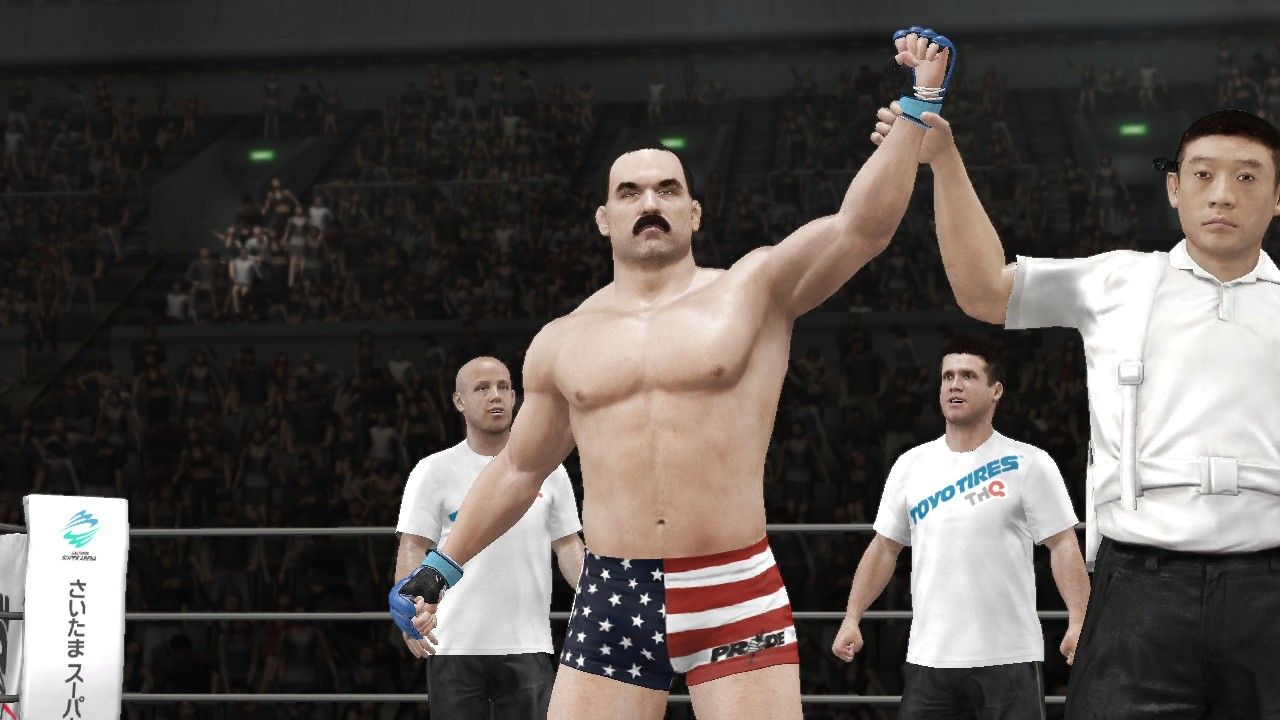 I cannot stress how much better the stand up game is in UFC: Undisputed 3, as opposed to its predecessors. It's wildly more responsive with a much wider variety of strikes to choose from. This opens up the ability to create new and interesting combos to pummel one’s opponent with. Kicks and knees to the legs and body actually serve a purpose in initiating and defending against take-downs. Also included is a new 'Sway' mechanic which allows players to bob and weave around an opponent’s strikes while waiting for the perfect moment to counter. It took more than a little while for me to get used to, but the feeling of slipping under an incoming jab, and then countering with a crushing right hook was almost pure bliss. Knock outs can come from any direction, at anytime, which keeps the player on his toes through every second of every round. It doesn't matter how well you have performed up to that heart breaking moment where you get caught with an unlucky kick to the face. All of the sudden you are in trouble and scrambling. It's this dynamic style of play that had me screaming at my screen, be it in exhilaration or absolute rage; it was all fantastic.

While punching someone in the face is always satisfying, what about kicking them in the legs? Undisputed 3 introduces leg kick TKOs, which sounds dumb until you actually accomplish it. Basically the idea is that you kick an opponent in the leg so hard that it breaks, and the fighter can no longer continue. It's actually a pretty awesome way to end a match.

The ground game has also been refined for both offense and defense. Gone are the days of accidentally landing in the somewhat uncomfortable north/south position, while attempting to posture up for some ground and pound goodness. Now achieving side mount, and delivering crushing knees to your opponent's head, depends much more on skill than luck. There are few things in life as satisfying as scoring a KO in this manner. Clinching and take down mechanics feel as if they could have been refined a bit further. While both work, there is a sluggishness here which often leads to the spamming of buttons, instead of the tactical presses/strikes that one wants in these situations. The ability to pin an opponent against the cage, while delivering damage from the clinch, is a welcome addition. Take downs can be effective if used in conjunction with leg, and body blows. Although moving to the inside against the AI was usually greeted by multiple, impossible uppercuts, that soon made the effort not worthwhile. This is probably an AI issue more than the actual mechanics, but it was still frustrating. On the other side of the coin, defense has been much improved. Fighters are now able to work off the cage in order to get back on their feet, or improve their guard. Reversals from a guard position into a mount are also possible, which can make for some pretty dynamic swings in momentum during a match. 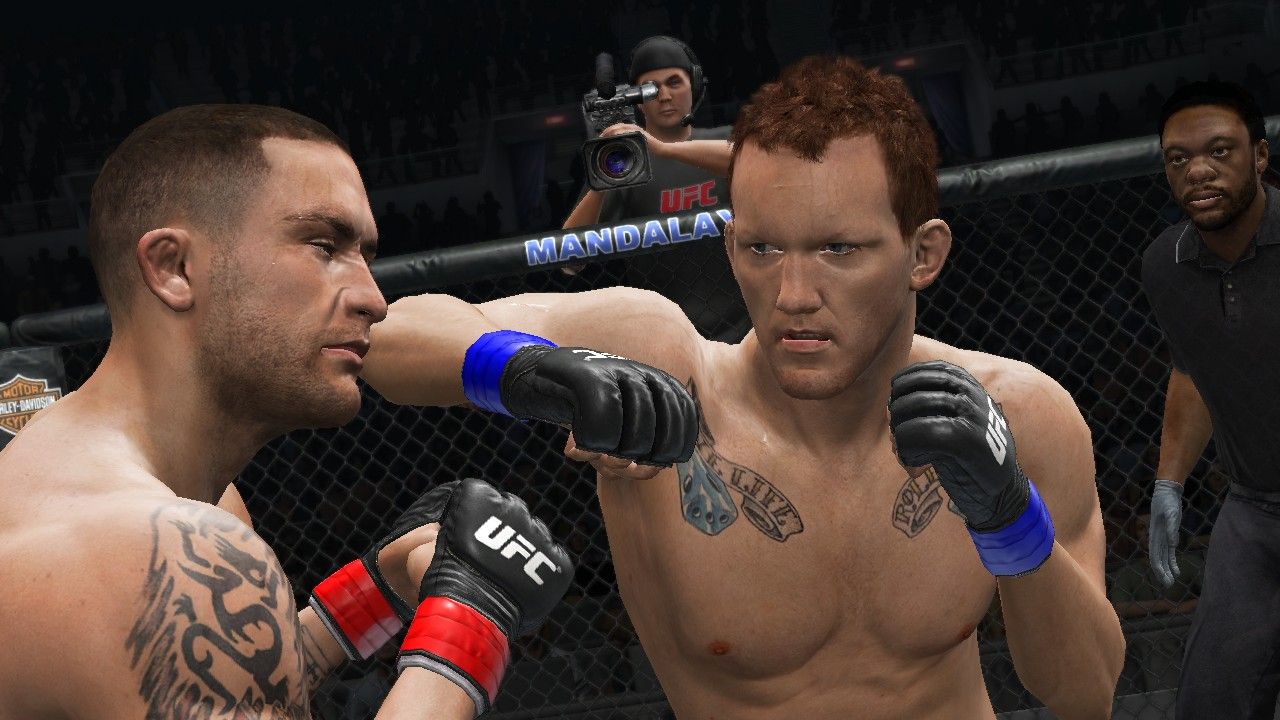 Unfortunately, all of these improvements do not extend to the game’s new submission system. Yukes basically turned submitting one’s opponent into a game of duck, duck, goose. When a submission is initiated by pushing the right analog, an overlay graphic appears on the majority of the screen with two Octagons, one for you and one for your opponent. To perform a successful submission the player must chase his opponent’s Octagon around the screen, covering as much of it as possible. Keeping your octagon in the correct position long enough will score the submission; most of the time. Once a submission is activated, the transition into the submission system is jarring; it breaks the rhythm of the match, and was an all around bad idea on the developers’ part.

The difficulty level in UFC 2012 varies pretty wildly, and is hard to gauge. Playing on anything but the highest settings will provide little to no challenge after about a half hour of play. I started playing on the default difficulty, and upped it almost immediately. Then after scoring a few wins in a row, something weird happened. It felt like the game artificially increased the difficulty of my opponents, making it almost impossible for me to pull out a win. Losing to fighters like Michael Bisping or Chris Leben in this manner prompted a turn off of the console on more than one occasion.

Yukes spent a ton of time on all new motion capture for UFC Undisputed 3. The end result of their hard work impresses with the fighters looking better than ever. Physiques look more like actual flesh, and much less like they were carved from stone. Fighting animations appear much more fluid, and contact with your opponent’s jaw feels much more realistic because of it. Hit detection has been improved, as well as the physics engine which calculates your response when taking a punch. Basically whether you are on the giving or receiving end, getting punched in the chops has never looked better. Unfortunately, all the polish seen on display in the ring can't be found anywhere else in UFC: Undisputed 3. It's almost like Yukes handed the game off to the D team, or possibly the interns at some point and said "Finish this up will ya?" That's how much of an eye sore the rest of the game is. It is a problem that is only compounded by the games long load times. 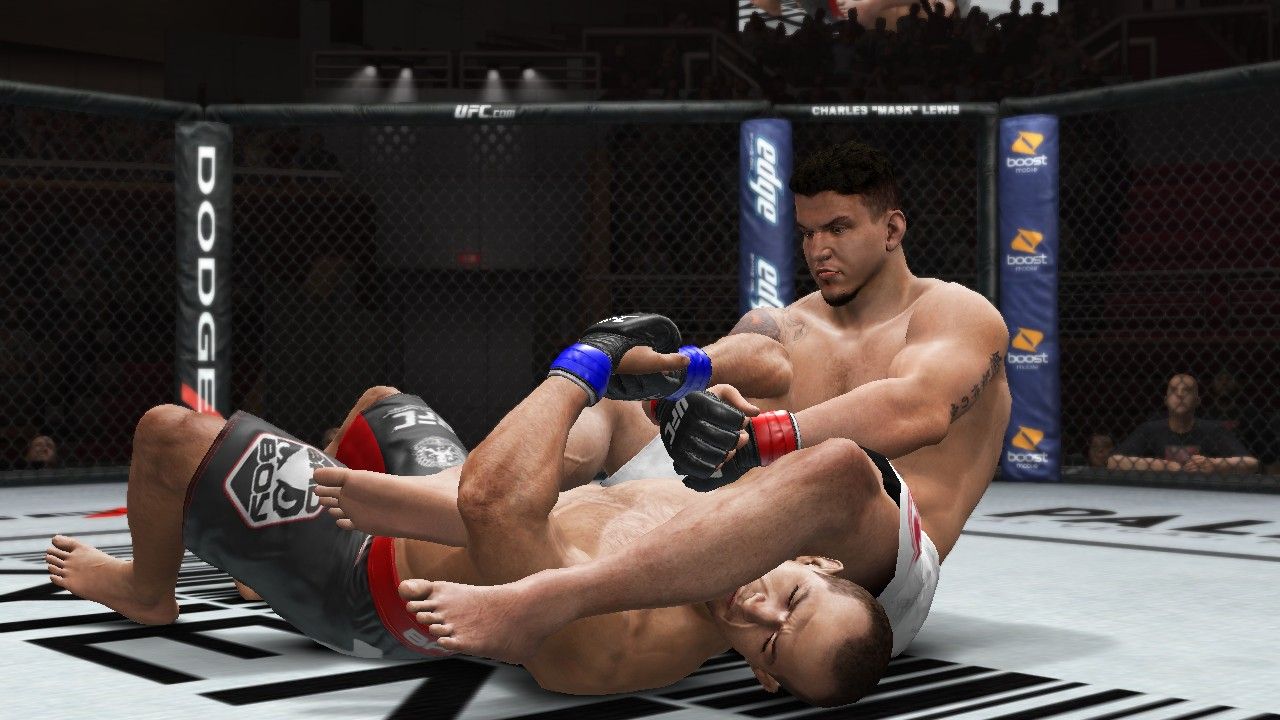 We're talking “get up and make a sandwich and still have time to spare” load times, people. Players will spend more time between menus, looking at a loading screen, than they ever will in the ring. I hear that installing the game to the 360 hard drive alleviates this issue, which is good because it is absolutely game breaking. Any momentum built up from a big win is immediately crushed by the seemingly unending and soul crushing load screens one must endure to get to the next match.

I sampled all the various game modes in UFC: Undisputed 3, and there are a lot of them. This game does not lack for content, or new experiences for a gamer to discover. That's even before entering the online arena. The majority of my time was spent in the career mode. Being able to create a fighter and move him up the ranks of the UFC is by far the coolest aspect of this game. The basic premise is that your fighter starts off in the WFA and works his way up to Pride and UFC events. After moving to the top of the field in any given weight class, players now have the option to move up or down in weight class. This not only adds to the replay value of the game, but requires a whole new strategy for tackling fighters that are much faster or more powerful than yours. All the while you will be building your fighter’s stats, scheduling new fights, signing sponsors, training with camps, and developing game plans between rounds. It all sounds good, but the actual training mini-games are fairly uninspired and at times seem downright broken. Time spent in-between matches gets tedious pretty quickly because of this. A little streamlining to create a quicker, more engaging experience would have went a long way to improving this issue.

For those just looking to jump right in with their favorite UFC or Pride fighter, the game offers up an exhibition, tournament, championship, historic fights, and create an event modes. All are robust and offer up new challenges for players to overcome, which in turn unlocks new items to be purchased in the shop. Players will also unlock various interviews, fight clips, and other videos. This is a nice touch even if the videos are a little low resolution. Then of course there is the online play which THQ built all new servers for. Much like in years passed, being proficient in this mode is going to require a lot of commitment, as there is a hard core community of UFC fans just chomping at the bit to tear you a new one. They don't work, they don't sleep, all they do is knock people out. So if you want to run with the big dogs, plan on spending a lot of time here. 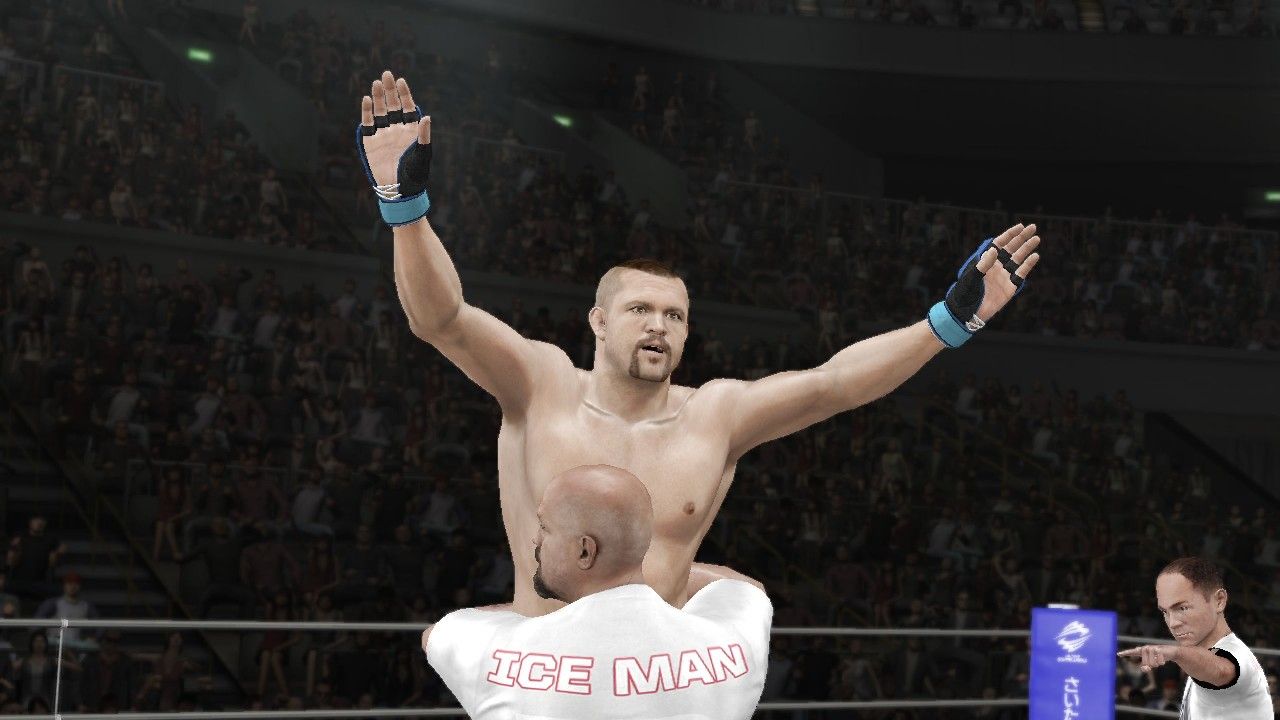 While disconnecting from an opponent is still a problem at times, when Undisputed 3's multiplayer works, it sings! In addition to ranked matches and leaderboards, I'm sure many fans will be happy to see that fight camps have made a return. Fight camps allow online players to join, or create their own camps. They can then take on rival camps, or participate in unranked matches, sparring, or many other community building features. One of the coolest new additions to Undisputed 3's online mode is the new 'highlight reel'. The game will save a last 50 rounds of play, and allow the player to go back and edit the sickest strikes, counters, and knock-outs into a highlight reel they can then upload for the world to see.

UFC Undisputed 3 comes packed with more than enough bang for your buck, whether you are an offline or online player. It is the cream of the crop in the UFC gaming niche, and the best MMA game on the market today. It is absolutely worth your hard earned money, and considering the financial hot water that THQ has been in lately, that's a good thing. I look forward to seeing you all in the Octagon, and making each and every one of you tap out.

Our ratings for UFC Undisputed 3 on Xbox 360 out of 100 (Ratings FAQ)
Presentation
77
The fighters and Octagon look great, and that is about it. Little to no effort was applied to polish menus, arenas, training mini-games, and the rest of the game.
Gameplay
83
The action in the Octagon is much improved, with striking and the ground game taking significant steps forward. The new submission system is pretty ridiculous.
Single Player
85
A refined career mode, the ability to switch weight classes, and the addition of the Pride roster offers up untold hours or replayability.
Multiplayer
82
Still a few disconnection issues here and there, but a very solid experience for the most part.
Performance
80
While the game runs smooth as silk during matches, tedium in-between matches, and unbearably long load times give a fantastic experience an ugly black eye.
Overall
81
The improvements outweigh the drawbacks in UFC Undisputed 3. Yukes has created the definitive MMA experience up to this point. While I'm looking forward to seeing how an EA published UFC game stacks up, I'm also a little sad that we will not see Yukes get another shot at the franchise. 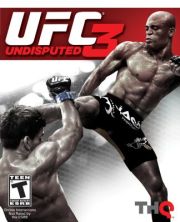