A provocative, engaging experience that is only marred by its brevity

Child of Eden, developed by Q Entertainment and published by Ubisoft, is the spiritual successor to the cult classic Rez for the PS2, Dreamcast, and Xbox 360 Arcade. Both titles are rail shooters that specialize in trying to use music and images to help create a unique experience for the player. Rez was bundled in Japan with a somewhat risqué devise, but no such technology has graced Child of Eden’s launch. Child of Eden was released on Xbox 360 with Kinect support; while the PS3 version is TBA for September with Move support. 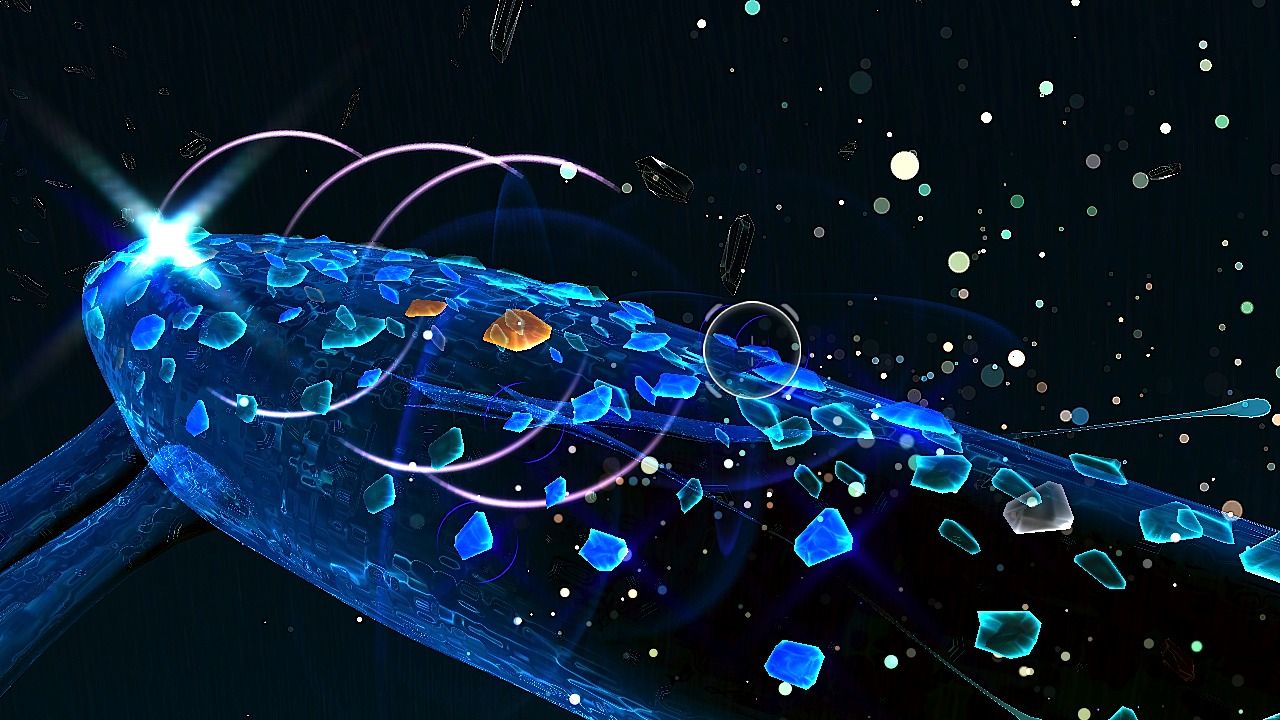 Child of Eden tells the story of Lumi a human that lived out her full life in the ever reaching expanse of space. After her death Lumi’s personality and experiences were uploaded into a vast computer database known at Eden. This database holds all the information pertaining to Earth so that explorers and voyagers of the stars still know the wonder that was their world. Humans wish to create the first ever artificial intelligence within Eden from the remnants of Lumi. This is known as Project Lumi and it is under attack from viruses and foul forces. It is up to the player to purify Project Lumi and save Eden.

Q Entertainment is not known for their overarching narratives and epic plotlines. Q instead tries to create a unique genre that captures both musical rhythm and colorful contrasting images. Child of Eden is no exception as it is very weak on the plot elements, but strong in visual creativity. The reason you will reach the end screen is from the strong gameplay and less about the salvation of Eden.

Gameplay is at the heart of Child of Eden. The player controls a cursor that is used to either lock on to targets, up to a max of eight, or shoot a continuous weak barrage of purple bullets. The lock on is the strongest attack in the game and is the pivotal experience. You use your lock on to purify targets ranging from small constructs to giant abstract creatures. If you launch a lock on attack in rhythm with the beat of the stage’s song you get a bonus. The barrage attack is weak against normal enemies, but is very effective at purifying purple enemies. Purple bullets are also used to destroy incoming enemy projectiles, making them essential for survival. Some enemies within the game can only be purified by first hitting them with a purple bullet and then locking on and shooting. 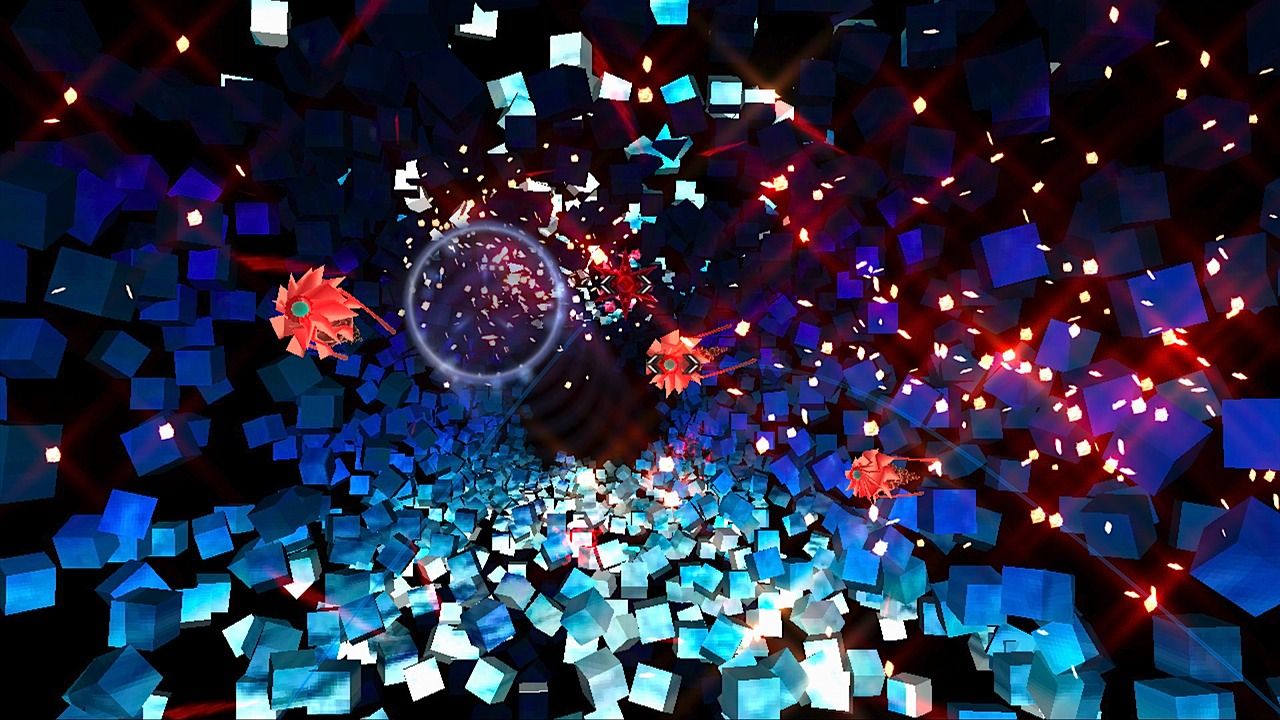 Child of Eden contains a deep scoring system. You get a multiplier for consecutive kills in beat with the music. The more enemies you kill to the beat the higher your multiplier goes. Subsequently the more targets you lock on and kill at a time the more points you receive. Collecting all the items within the level, as well as purifying all the enemies, also plays into the rating you receive. At the end of the level you are presented with a numerical value, which are the points you accumulated throughout the level as well as a percentage of items and enemies you purified. All this is all summed up neatly in a star rating going up to five.

The controls are tight and responsive. The title is Kinect compatible, but I played my copy with the regular Xbox 360 controller. Enemies appear and disappear quickly on the stage and even though the game starts out easy it gets deceptively hard, even more so if you wish to get a five star rating. The game is only about two hours long from the initial play through, but has tons of content that makes the replay value high. The levels are short being roughly 15 to 20 minutes long. Even though the levels are lacking in length you may find yourself dying a few times during the last few levels and it is addicting trying to get a higher score. Also levels are unlocked by the amount of stars you have amassed during your play through of stages. This requires you to replay old levels if you wish to unlock new ones. A sea of collectibles is also obtainable containing new artwork and even a new difficulty level.

Child of Eden is stunning to say the least. Each level is a marvel of colors and abstract shapes that grace your screen. The music fits perfectly with the overall aesthetic presented in each level. The soundtrack was done entirely by the Genki Rockets, a band made up of unnamed musical artists and is faced by an 18-year old fictional girl named Lumi (sounds oddly familiar). Electronica and trance is what makes up the majority of the soundtrack, which fits nicely with the overall feel that is given off by Child of Eden. The experience is very mesmerizing and engrossing, so much so I did not even notice my dog walk up behind me, startling me in the process. Each stage has a strong beat that is further intensified by the vibration of the controller. Each shot you take in the game contributes to the song allowing the player to interact with the music of the stage. 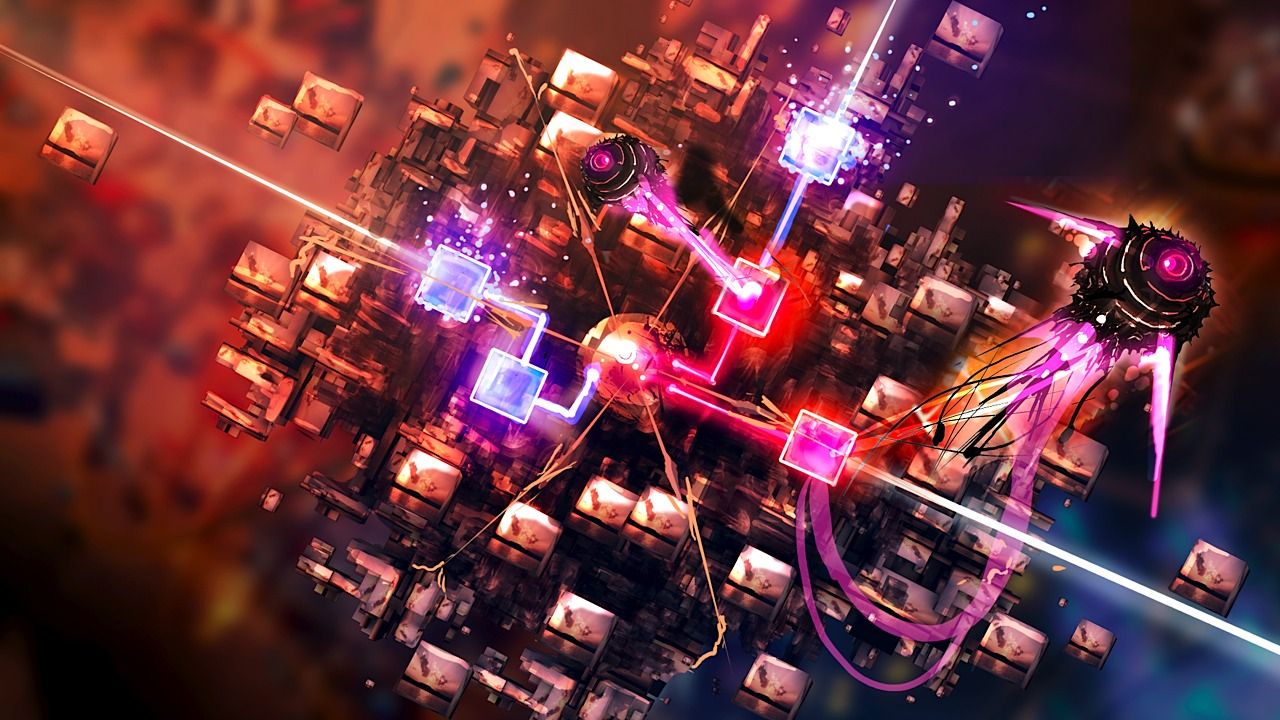 Child of Eden’s level design is a marvel of abstraction and creativity. Swirls of bright colors and smooth shapes create a unique atmosphere that feels different with each stage. The first level is reminiscent of Rez with a wire frame tunnel that goes faster and faster culminating in the purification of a central core like device. The second level on the other hand is a vast departure as you move through the evolution of a creature. The creature starts out as a single strand of DNA eventually forming a giant star whale and finally a phoenix. Each level is a treat for the senses and their motto synesthesia, integrating the feelings of sound, sight, and touch into one experience, is spot on.

Q Entertainment has successfully created a spiritual successor to the cult classic Rez. Child of Eden is an engaging, if not a bit seizure inducing, trip that leaves a favorable impression on the player. This game touches both your eyes and ears with a wonderfully mastered soundtrack and pleasing visuals. Each level is wonderfully designed from abstract shapes and colors as a homage to human ingenuity. Child of Eden has every right to be named next to its sister game Rez. Even with all these strengths, Child of Eden is not without its faults. Content is spread thin and the length leaves a lot to be desired. Collectibles only add so much to the lasting appeal to the game. Without its strong gameplay and beautiful level design Child of Eden could have been a mediocre title that would have been forgotten. Q has shown that there is still life in rail shooters and the genre is far from dead. If you enjoyed Rez or are looking for a provocative, engaging experience then look no further than Child of Eden.

Our ratings for Child of Eden on Xbox 360 out of 100 (Ratings FAQ)
Presentation
89
Impressive visuals with wonderful use of color and design. The overall aesthetic of the game is pleasing on the eyes. The soundtrack is mesmerizing adding to the immersion of the game.
Gameplay
85
The gameplay is engaging and addictive. The purifying mechanics and scoring system keep the player coming back to replay old levels.
Single Player
60
A charming treat, but unfortunately it is far too short. There are not many options outside of the main levels so content is on the low side.
Multiplayer
NR
None
Performance
85
The game plays smooth as silk. The controls are tight and responsive with good strong animations even with large amounts of enemies on screen. The sound syncs nicely with action on the screen.
Overall
77
Child of Eden is an enjoyable trip for those hoping to dive into an experience that touches the senses. This title does fall short in the length department, being thin on content. Regardless, you will be coming back to increase your score and relive old levels. 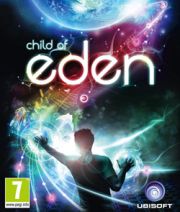