E3 11: We check out the upcoming RPG from Square Enix and see how it has progressed since last year

Readers may recall our E3 2010 preview of Deus Ex: Human Revolution. Back then, the fundamentals of this RPG title were strong, and seeing the game once again at this year’s show, we’re happy to report that everything is still intact. Though it was originally scheduled to release in April this year, the game was pushed back to August, thus giving it a chance to make yet another E3 appearance. We got the opportunity to drop by the presentation and see a lengthy live demo of the title in action. In the presence of the game’s Art Director and a game designer, the demo showcased the protagonist’s attempt to retrieve important data from a secure location.
For the demo presentation this year, the action was taking place around 15 hours into the game. In a city near Shanghai, Adam found himself in the business district which housed the HQs of many of the cybernetic companies. We needed to reach the top of an extremely tall building, in order to access a server and retrieve data crucial to revealing an ongoing conspiracy. Starting off at the ground level, it took multiple elevator rides to finally get to the destination. 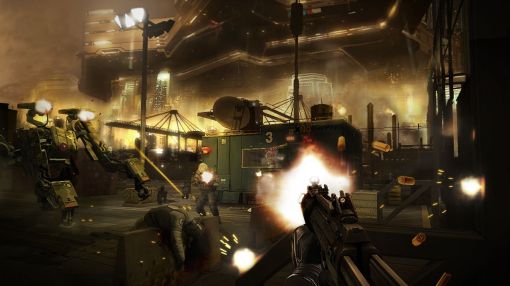 A word must be said about the very interesting design of the city itself. The city is actually divided into two parts, an above-ground part as any normal urban center, but it actually also has a full living city below the surface. To put it in perspective, the underground city is itself full of skyscrapers, and has a cement ceiling. Some buildings, such as the one we were infiltrating, actually spanned from the bottom of the lower city all the way above the cement ceiling. Up here, the scenery was peaceful as natural sunlight promoted natural habitat and free architectural design. Down below, meanwhile, the setting was bleak and depressing, with no natural light or any vegetation to speak of.
For the purpose of the demo, stealth was employed as the primary means to complete the objective. Having bribed the front door guard, Adam proceeded to hack a security terminal down the hall, and found himself in a large open area. Of note, the hacking minigame was done extremely quickly, with little chance of giving us an understanding of how it actually plays. In this open area, Adam saw a number of guards, including one far off on the catwalk. Pulling out the sniper rifle, the aim was just too unsteady, so Adam upgraded his Aim Stabilizer augmentation, giving him an easier shot. Upon arriving at an elevator shaft, the developers noted that to survive and continue, Adam needs a specific augmentation unlocked. If he does not possess it, he’d have to backtrack until the skill becomes available, and there are a number of these “checkpoints” through the campaign. 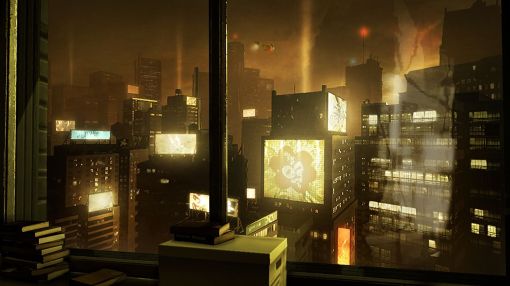 Having safely descended, Adam dispatched two guards at once with a deadly melee attack, and proceeded to use a stun gun on a nearby security camera. Having gone up with an elevator ride, Adam used his X-ray vision augmentation to spot the enemies in a room, and purposefully setoff the alarm to show off the combat. As enemies poured out of the room, they were rendered helpless by a well placed grenade launch, and the arrival of a sentry robot was ended with an EMP blast. In this area, there were Red zones and Green zones, meaning Adam was free to walk around the Green zone area as long as he hid the weapons. In order to progress, Adam had to distract a guard and silently took him out in a private room, as not to alert the nearby citizens. Since he did so, he had to employ stealth to progress through the next laboratory area. Had he bribed the guard or found a pass card, he’d be free to walk around the lab area without interference.
As Adam finally arrived at the server containing the crucial data, the demo concluded. The developers strongly emphasized that this was just one of many paths that users can take in the level, ranging from conversational options to all-out combat approach. The game was running on Xbox 360, and it looked quite good, though speech animations could still use some work. The game is already looking good, and since it’s been delayed to give more polishing time, there’s little reason for fans not to be excited about this RPG.