Splatterhouse is Namco's most recent reach into its old bag of tricks, an old arcade game that was not known for pulling punches. The original was a slaughterfest for those into Friday the 13th and Halloween who needed a slot in the arcade. Namco has pulled this guy and revamped him with the power of modern tech. Unfortunately its an old idea and hack n' slash needs some bang to stay original. Make no mistakes, this is a well funded re-release with vats full of blood. But the shoddy production value and repetitive combat makes it a really cheap game.
So enter the revamp. Rick is back and so is the "Hell Mask." The first character you're really going to get to know is the Hell Mask. He's your guide through the world of Splatterhouse. Your boy Rick Taylor starts the game on the floor of West's mansion with his guts literally spilling onto the floor. As he lays there, dying, he notices a hockey mask staring at him. In a forbidding voice it tells him to put it on. It tells him it can save his girlfriend. So Rick puts it on and the magic kicks into gear and you become a super buff monster. The mask is obviously evil. He's usually going back and forth between encouraging a massacre and making rape jokes. At least in the originals he kept his mouth shut. The humor is honestly childish and sloshes over with offense. He eggs you on like a drunk friend watching you play, saying stuff like "Punch it in the ass!" or "Look, I'm getting head!! AHAHAHA!!". 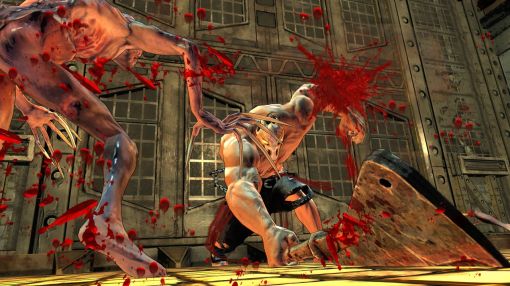 The combat is hack n' slash, but with your fists and it's brutally repetitive. I say brutally because there's so much blood here that brutal is the only word to describe it. You'll go through pounds of monster flesh with a few simple combos. Button mash to your hearts content. Most of the upgrades you get will just make this easier. Weapons, though, are an odd pleasure. The sword makes short work of a room of enemies and the shotgun is very satisfying. At the beginning of the game combat is really fun. The enemies die satisfyingly and the levels keep things interesting, even though they're linear. But soon you'll start to find yourself performing the same combos and seeing the same finish animation over and over. The gore will stop being awesome and start to churn your stomach.
The enemy variety is not bad here. You've got zombies and creepy crawlers, a whip armed centaur, and some indescribably nasty baddies. None of them take much skill to bring down, there are no special moves to get around them. Just mash 'em to death. At the end the game is throwing nothing but repeat enemies. I got really tired of killing the same guys. The bosses are big, for sure, but they never took more than some fist swinging and the occasional dodge to bring down. Some bosses are fun. They're usually well staged. The game's soundtrack is usually grindings, but for the bosses they bust out the big names. The classic arcade battle between you and the guy with chainsaw hands and bag head is backed up by the iron guitars of Mastodon. This was one of the few good moments in Splatterhouse. 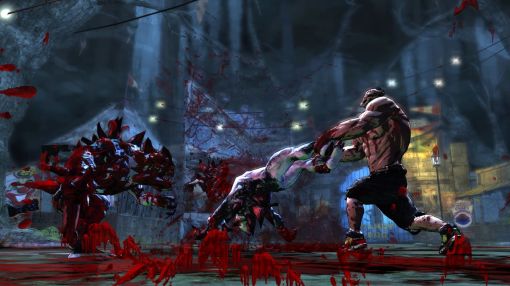 The game is never really difficult. The health recovery is broken. You can be fully healed while immobilize your enemies. Splatterhouse includes side-scrolling sections that are punishing in a way only too similar to the original. Most of my deaths were a cause of poor area mapping and blind bad luck. I had difficulty slowing down to dodge spike pits and smashing hammers. These were made only more frustrated because of the inexcusably long load times. The art is good, solid graphics and all, but it seems like the engine is not good enough to run it.
This is a fiercely violent game but it lacks fun combat. The engine is trying to do too many things at once and is usually ground to a halt. Console games should have better performance than this. The gore is overdone and vile, not to mention that the game can get pretty sexist. (See picking up nude photos of your girlfriend via trail of breadcrumbs.) I would not get this for little cousin Ada. I love the music, but I'm ashamed to be put into the stereotype Namco is clearly aiming for. The side-scrolling is fun and Splatterhouse is engaging, at least at the beginning. But all in all, this game stinks of rush and way overshoots the mark.

Our ratings for Splatterhouse on PlayStation 3 out of 100 (Ratings FAQ)
Presentation
80
The art is geared towards comic book loving metal heads with no punches pulled on gore. There's more blood in this than in any game I think I've ever played. The artists are pretty talented though. The sound track is a mixed bag, ranging from grinding to rocking.
Gameplay
60
The combat is brutally repetitive. You will be doing the same finishing moves over and over again. Retro side-scrolling sections can be fun but deaths are punishing and unfair. The Hell Mask never shuts up and gets very annoying as the game goes on. The weapons are solid, some are very satisfying. Bosses are big and stupid.
Single Player
55
The writing absolutely sucks and the story is nonsense. The Hell Mask is your narrator, best friend, and enemy so you'll get tired of him fast. There's a good variety of enemies, but they throw a lot of repeats at your towards the end.
Multiplayer
NR
None
Performance
45
The engine here is not good enough for all of the stuff is trying to do. There are 8 different production studios in the opening credits and the chaos of it shows. The engine is clearly not good enough to run all of the monsters, fighting, and blood. This is very disappointing to see on a console.
Overall
60
The load time suck, the Hell Mask is annoying, and the sin is just way overdone. Go for it, if all of this is excusable for buckets of blood and some good metal. Otherwise, keep your kids away. 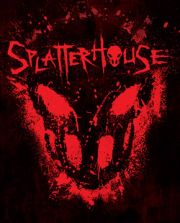