Don't let the simplistic appearance fool you, Braid is devious in its complexity and unique in its ideas.

We're all guilty of succumbing to misjudgments based on first impressions, in fact it's a natural instinct. Indie developer Jonathan Blow's Braid is a game that's initial allure lies in its calming water colour imagery and serene soundtrack, lulling you in with its apparent childlike simplicity. However, the title soon presents itself as a truly ingenious test of cognitive ability that will force you to think in ways that defy established videogame conventions. 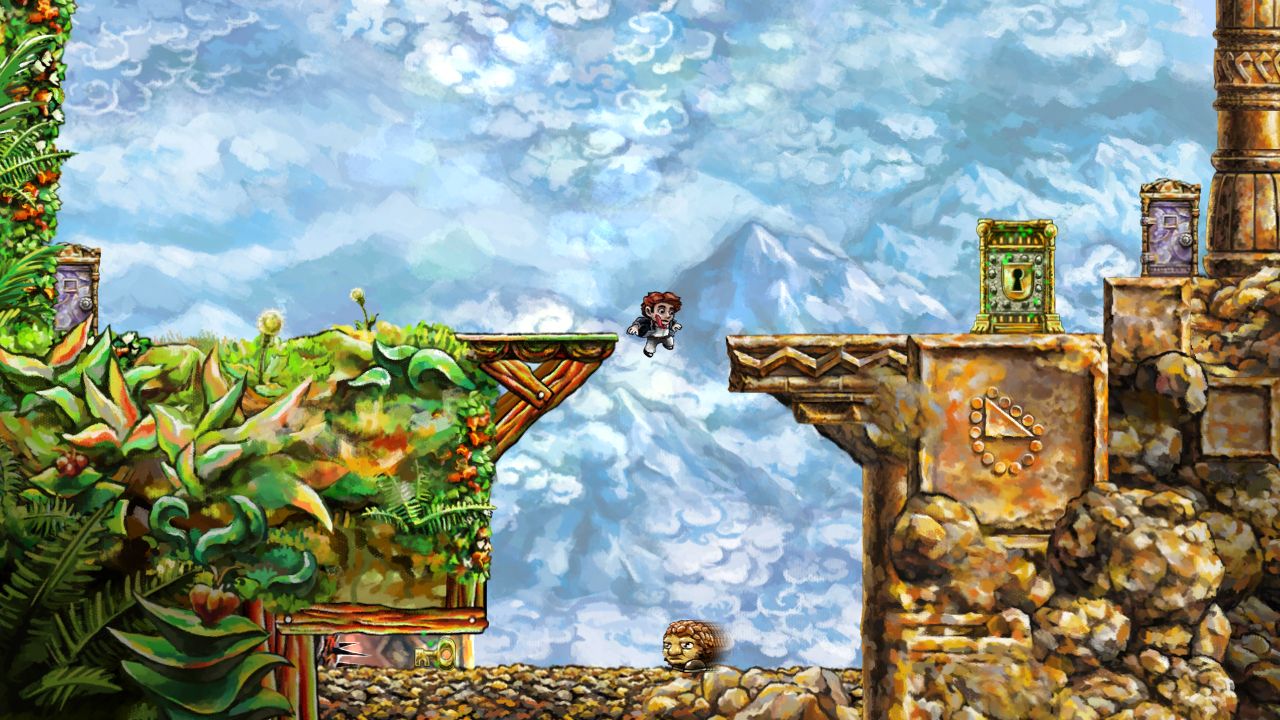 There is a loose narrative of sorts running throughout Braid. You take control of whom appears to be a mischievous looking schoolboy, referred to only as Tim, and are tasked with locating and rescuing a princess in typical fairytale fashion. There is also a subtext interweaved in story book form between levels, the strangely personal nature of which is open to interpretation. Whether you'll feel your being asked important human questions or simply being exposed to pretentious rambling will be subjective to what kind of player you are. However, whether you find yourself embroiled in the narrative or not, it's a pleasant and inoffensive addition, an inclusion that could arguably be perceived as a rarity in puzzle titles. The real charm to Braid, at least primarily before the serious problem solving begins, is in its captivating style.

It's an instantly engaging game, with the aforementioned visuals and musical score combining to craft a world that's bursting with hallucinogenic qualities. The bright, dream-like backdrops are complimented by the rising and falling tones of the calming audio to create an atmosphere that demands to be soaked up - despite the two dimensional limitations. In fact, Braid harks back to the days of 2D classics (one level even pays homage to the pre-Mario blueprint, jump man), yet where it distances itself from prehistoric platform hopping is the time altering mechanic, which is the basis for the game's increasingly complex puzzles.

In fairness, time alteration is not a wholly original concept in videogames, and although in Braid it can be implemented to simply right mistakes (a la Prince Of Persia), its extension into puzzle solving is where the true depth lies. Collecting puzzle pieces (and subsequently placing them in a jigsaw) is essentially the key to the game's completion. Although it‘s not entirely necessary in order to traverse each world, this collection process is the only way to reach the game's final secret stage and unravel the story. 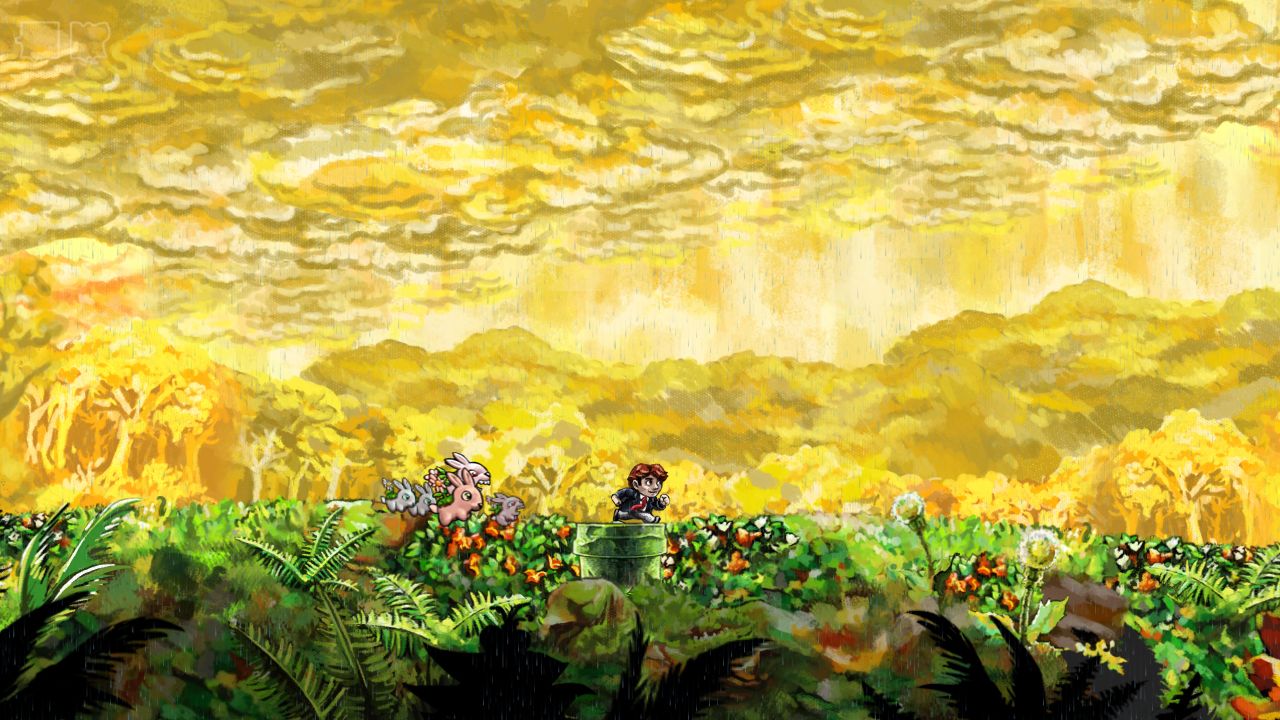 Although this is initially a simple task, it becomes increasingly more challenging, with later pieces bordering on the fiendish to reach. Braid can be frustrating at times due to the fact that some problems really do appear to be utterly impossible to solve, yet when you do finally figure a conundrum out you‘ll pay homage to the genius of the idea. If ever a game made you scratch your head in sheer bewilderment then Braid is certainly it, yet it will also make grin with delight when everything clicks into place.

The reason why it becomes so difficult, and quickly, is that each world (seven in total) adds a new slant to the time mechanic. World two, where the game properly begins, it's as simple as hitting square/X to reverse time. For example, a key to unlock the door barring your way lies at the bottom of a pit with no obvious means of clambering back to the surface once down there. The solution to such a problem lies in falling down, picking up the key and then reversing time, thus returning to the surface with it in hand and the means of opening the locked door. This really is barley scratching the surface however, and by the time you've become fully accustomed this relatively simple method of time manipulation, the following world will completely alter the way everything works.

Subsequent worlds will introduce switches and platforms that are exempt from time manipulation; the third group involves enemies that move back and forth in accordance to your own direction; silhouette versions of Tim ramp up the complication level to new heights; and a bubble that slows down everything within its sphere will leave you perplexed as to how, when, and where exactly to employ it. Many will inevitably be drawn by the easy temptation of Youtube walkthroughs during the latter stages of Braid, but the most patient and dedicated will stick at it and pit their wits against whatever devious puzzle Mr Blow has presented them with. 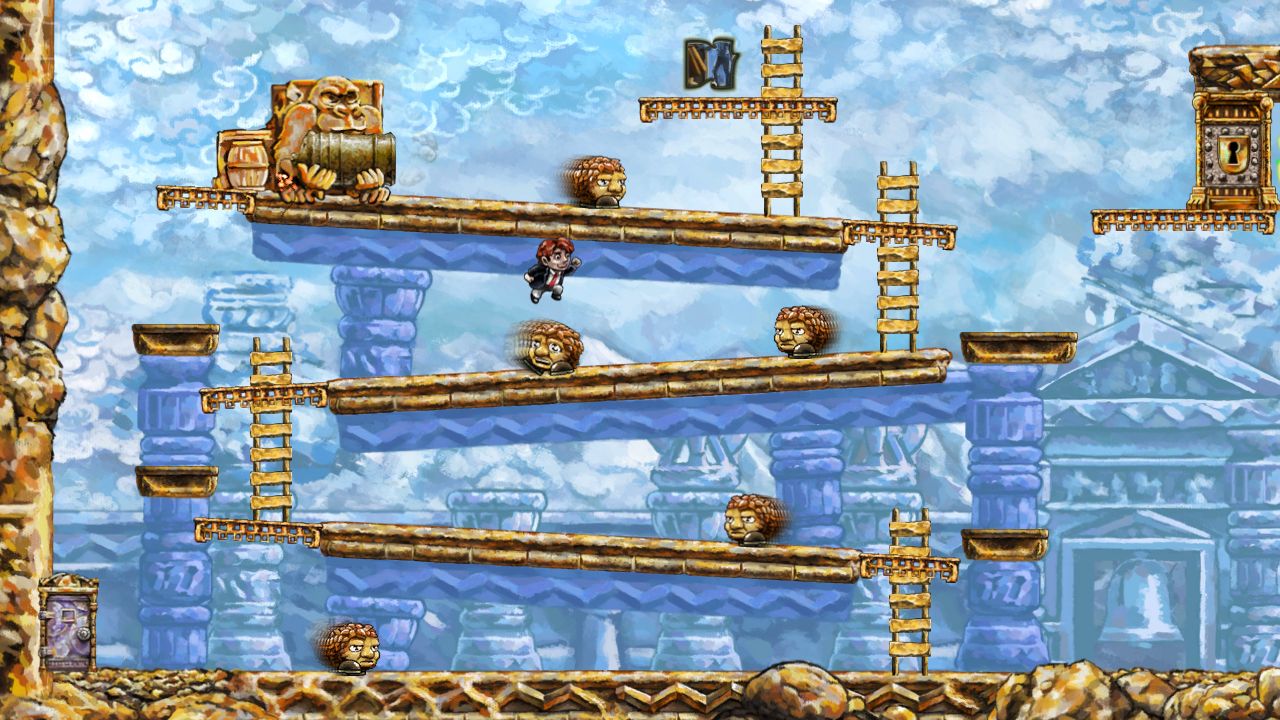 The implementation of inspired ideas and unique level design are what sets Braid apart from other altogether more mindless videogames. There's a degree of ingenuity here that we rarely experience in era of brash FPSs and cover based shooters. Puzzles that once solved you'll heartily congratulate yourself for figuring out, and simultaneously want to run and shake the hand of the man responsible for conjuring them up.

The rules of Braid constantly change and you'll have to adapt with them. Yet, once you have got your head around what the game is cunningly asking you to do, you'll welcome its devilish brilliance with open arms. Cryptically hidden and deceptively hard to find stars will also add longevity for those who really want to scrutinise each and every segment of Braid's worlds; a task for those with true perseverance skills only however.

It should be noted though that Braid will not be to everyone's taste. If you're a casual gamer who gives up easily, then the likelihood that you'll make much meaningful headway into the game is pretty minimal - you'll need to have patience. Whilst many will praise the art style - and it certainly is unique - the predominantly bright palette could be a little too garish some players, who may well be turned off by the apparently infantile appearance of the game. It's also been insinuated that it's supposedly a title that makes you ponder your own existence and other such pseudo-important phrases. That's rather open to debate to be honest, but what's a certainty is that Braid is one of the most finely crafted and intelligent puzzle/platform games of recent years, and certainly should act as an inspiration for aspiring indie developers as to what they can achieve. It also serves as a reminder that quality games don't have to come in the form of massively budgeted, triple-A releases, but also from an individual's own creative spark.

Our ratings for Braid on Xbox 360 out of 100 (Ratings FAQ)
Presentation
89
Yes, it's 2D platform puzzler, but the watercolored artistic style and serene musical score make Braid a joy to both look at and listen to.
Gameplay
88
Very simplistic controls and some incredibly complex puzzles. The various slants on the time manipulation mechanic keep Braid varied from world to world, as well as ramping up the difficulty to devious, but ingenious levels.
Single Player
86
Length depends on an individuals patience, perseverance and puzzle solving ability. Initially, expect constant setbacks in getting each puzzle piece, yet a great sense of accomplishment when finally doing do.
Multiplayer
NR
None
Performance
80
The time manipulation mechanic works efficiently and smoothly and there's little to bemoan about the platforming sections. Braid is not a game that prides itself on amazing technical ability however, but rather the excellence of its ideas.
Overall
88
An inspired indie game that challenges both genre conventions and the player's cognitive prowess. The relentlessly difficult puzzles may put off the casual gamer, but those who relish a challenge should certainly invest. 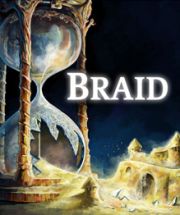 Our Review of Braid
88%
Great
The Verdict:
"Don't let the simplistic appearance fool you, Braid is devious in its complexity and unique in its ideas."
Game Ranking
Braid is ranked #49 out of 1646 total reviewed games. It is ranked #3 out of 28 games reviewed in 2008.
48. Battlefield: Bad Company 2
PlayStation 3
49. Braid