Want to play as the cop instead of the robber in an open world game for once?

With other third-person-sandbox style games available like Grand Theft Auto IV, Red Dead Redemption, or Fallout: New Vegas, is there a reason to pick-up an older game like Crackdown (2007)? Although the first Crackdown is a bit dated, the game has its moments where you may even forget those other games exist…at least for a while.

Crackdown is the first in the series (the sequel, Crackdown 2, came out earlier this year) and takes place in the near future where gangs rule the metropolises of the world and law enforcement is hard pressed to keep peace and justice. With the introduction of genetic enhancements, the police (known as the Peacekeepers) have gained an upper hand in the battle. With help from a special organization called “the Agency” you play as one of the genetically-enhanced agents and are able to run faster, jump higher, and generally dominate other humans. 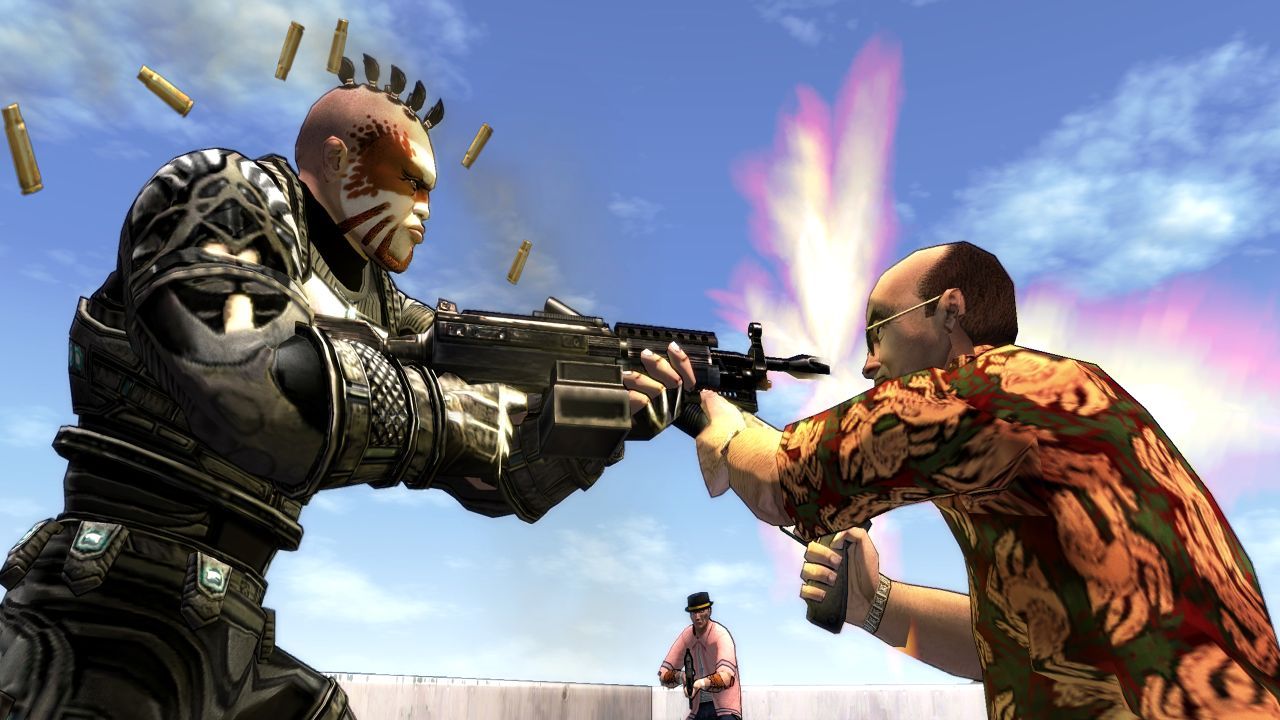 If you picture Crackdown as a slightly futuristic take on Grand Theft Auto, with you being the lawman instead of the outlaw, you’re not far off. The gameplay breaks down into three aspects: driving, shooting, and hand-to-hand combat.

The driving aspect of this game is fun. I’m a fan of visual damage to your vehicle as it rams into things, so details such as flames from the engine when it’s about to explode, car doors flapping open and closed after you’ve been in a T-bone collision, or a crumpled hood or trunk after slamming something (or someone), are not wasted details.

The shooting is OK. While there are interesting guns available and finding new types of guns on dead gang-members can be a thrill, for the most part, we’ve seen guns done better in plenty of other games. Hand-to-hand combat is clunky and difficult to pull off without looking like a fumbling idiot. Most of the time, you’ll be shooting, rather than getting close and personal with the enemies, simply because the movement for precision actions is not there.

You start out at the Agency’s headquarters. There, you’re given a choice of vehicles: car, truck, or SUV. Agency vehicles can only be obtained at the Agency headquarters and since they grossly out power other vehicles on the street, you’ll be visiting the headquarters often. There’s a continuous fight right outside of the Agency building so you’re introduced to the combat mechanics of the game (the shooting and hand-to-hand combat) straight out of the gate. From there, your director gives you a list of criminal kingpins to take out. The list of assassinations is practically the rest of the game’s main story and objective. Travel here and kill this guy, now travel over to this city and kill that gal. While it is fun to take on the king-pins, since they usually match you in strength and give you a good challenge, it disappointed me to realize that for the most part, that’s all you do through the game—take out one target after the next. It gets old. 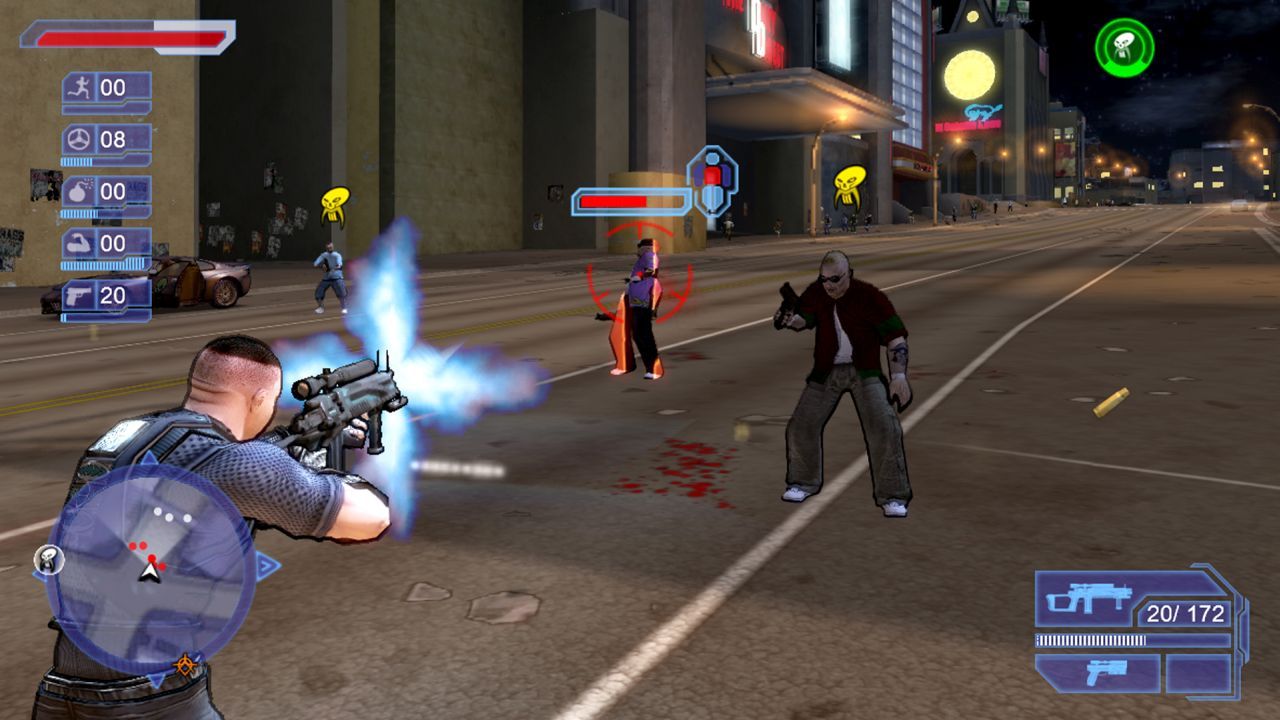 Although the main objectives of the game are assassinations, traveling between jobs often leads to getting sidetracked which can provide a little chaos amidst the repetitive string of “hit” jobs. Perhaps you get caught up in a gang/peacekeeper street shoot out, go on a hunt for new guns, get unjustly rammed by a citizen driving a pickup truck and hunt them down for revenge, or, my favorite, get way out of hand driving on the freeway into oncoming traffic—the list goes on and on. These spontaneous activities lend a great deal of replay value to this title. While you can get a better experience racing through oncoming traffic in a true racing game, you’re not able to jump out of your car and start unloading bullets on your pursuers in most single genre games. You get somewhat of a unique, “jack of all trades” experience with Crackdown.

You are able to increase your skills in Crackdown, which allows you to jump higher, run faster, drive better, or shoot with greater accuracy as you rank up in these areas. Some skills require you to work at leveling up (like completing races) but most you’ll skill up just by actions you perform regularly (such as shooting or using explosives). Skill levels do make a difference, so you’ll want to go out of your way to complete the races.

The campaign mode (putting aside the monotony of pursuing one boss after the next) is well crafted and fun. Although you could speed through the game, taking out all crime lords in all three cities under 10 hours, you probably won’t since most of the fun is had just dinking around the streets taking on random clusters of gang members or driving like a maniac on the freeway.

Although the campaign mode is fun enough on its own, the real highlight of Crackdown is its multiplayer aspect. The Co-op mode is basically the same as the campaign as far as gameplay and graphics go, but Co-op, as the mode’s title suggests, allows you to either system link or go online to tackle the king-pin assassinations together. Whether you’re blasting gangsters, or running each other over with cars, you’re going to have a great time with a buddy.

Crackdown’s graphics have dimmed a bit with time, but they’re nothing that will detract from your overall gameplay and experience. They’re good enough, and there is a lot to take in from the knot of cities in which you roam. Not only do the cities stretch on for miles, but the skyscrapers add to the oppressive big-city feel. 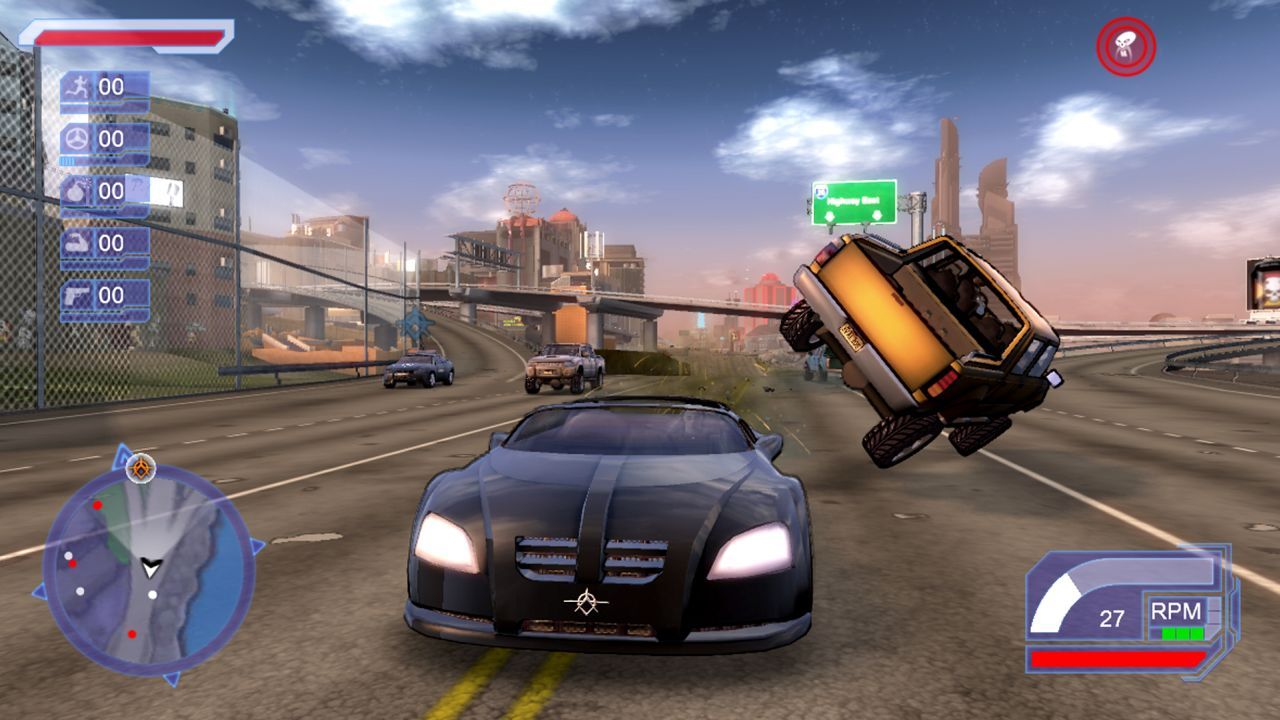 The sounds and music selections fit the setting and overall feel of the game perfectly. What Crackdown is best at, in terms of audio and sound, is when you hop into a car, truck, bus, or semi. Depending on the make and model of the vehicle, you’ll get metal blasting or techno thumping out beats as you race down the street in search of your next target. Engine revving also sounds very realistic and you occasionally get chills up your spine whenever you get a really hyped-up car and hear its engine roar.

Dialog is somewhat lacking in Crackdown. While pedestrians and thugs do interact with your character and exchange dialog, the voice you’ll hear the most is the Agency’s Director who gives you updates on current gang-related activities too often. After listening to his words of wisdom and warnings every few minutes, you begin to wish there were a “mute” option for his voice.

Crackdown may be a step down from current titles, but it’s not a big step, and at its current cost, it’s a great game to get if waiting for that next big title and you’ve got a few bucks to spare.

Our ratings for Crackdown on Xbox 360 out of 100 (Ratings FAQ)
Presentation
81
The game does well with portraying inner-city life. The sounds and music duplicate the commotion heard in big cities rather well. The voice acting suffers a bit mainly due to your contact at the agency.
Gameplay
79
The gameplay is a mix of clunky hand-to-hand fighting and great driving and shooting mechanics. For the most part, you'll enjoy running around either of the cities playing with gangster prey.
Single Player
71
The story is lacking and the characters are forgettable. Most of the missions you're sent on are repetitive "hit" jobs. The real fun in the campaign mode comes from the non-scripted deviations from the missions when playing around in the city's streets.
Multiplayer
94
A blast with people you know or just getting matched up with. This is one area of the game that is a sure-fire formula for fun - no matter how much you play multiplayer.
Performance
80
Runs great with little to no lag during gameplay. Loading screens however take longer than most similar games.
Overall
82
A series of hits and misses in the above categories. For the most part though, Crackdown proves to keep players entertained for hours either solo, or with a friend - preferably with a friend. 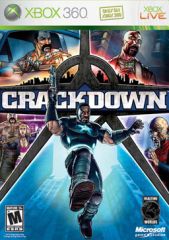 Our Review of Crackdown
82%
Great
The Verdict:
"Want to play as the cop instead of the robber in an open world game for once?"
Game Ranking
Crackdown is ranked #340 out of 1739 total reviewed games. It is ranked #9 out of 13 games reviewed in 2007.
339. Amnesia: The Dark Descent
PC
340. Crackdown