A clever fantasy RPG that's like a little World of Warcraft

DeathSpank is EA's newest Xbox Live adventure, featuring the heroic hero Death Spank, who will be making a return in the upcoming sci-fi sequel next year. DeathSpank is a simple Fantasy RPG with an interesting art style and loads of funny writing. The fantasy setting is one big joke, nabbing from well known magical locales like the enchanted forest and wizard’s tower. The gameplay is simple hack n’ slash where our hero slashes and hacks his way through quest after quest. DeathSpank was created by HotBox, the same studio that did the Penny Arcade games, and their writing ability stays strong even if it’s often really cliche. 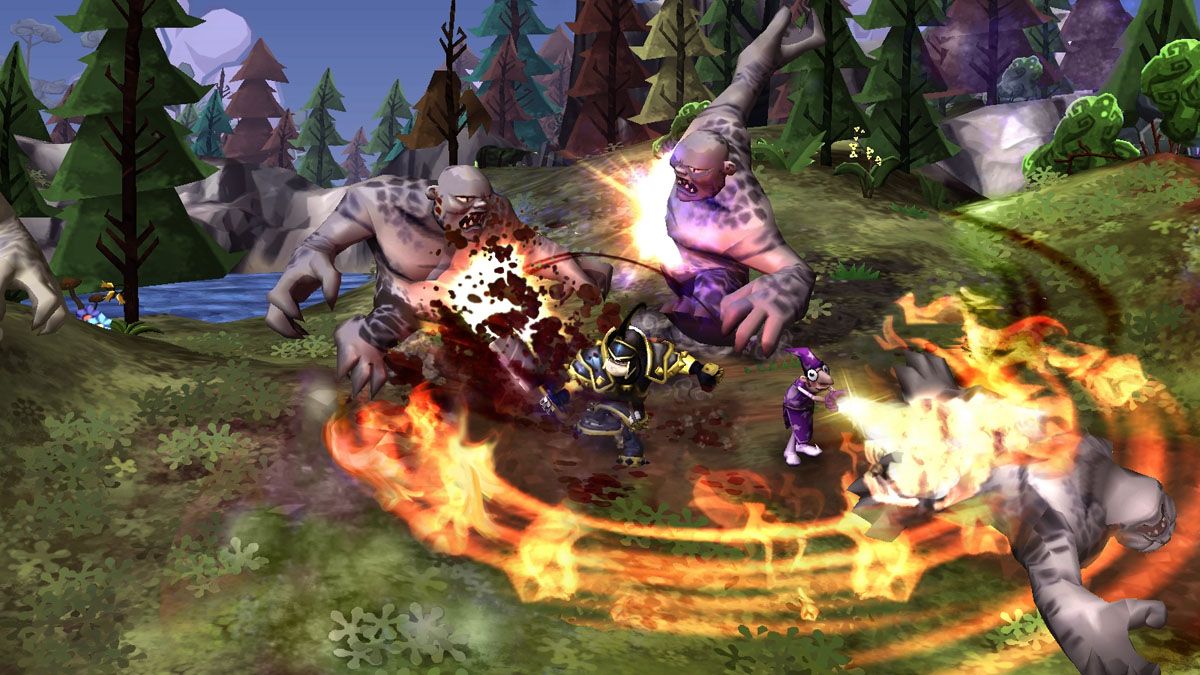 Here's a quick story arc: you're a hero who wants a magical artifact (which may actually be bacon), you help nameless citizens by doling out Justice, and you'll (hopefully) eventually kill the evil tyrant Lord von Prong. The game is an addictive 8 to 10 hour romp through the sweet world that HotBox has created. The presentation of this world is particularly cool, I was really drawn in from the first moment of gameplay. The cheesy opening cutscene had me a little skeptical, but as soon as you're plopped in to kill creatures then it's all good. DeathSpank's world is designed with a curve-of-the-earth kind of look. The horizon slopes in the distance and it's almost like you're on top of massive sphere that's rotating under you while you stand still. All of the props in the world, not the people, but the buildings and trees and towers, are like 2-D cutouts or pop-ups from a storybook. It's a cool effect, especially because all of the colors are super vibrant.

The gameplay is simple, but effectively addictive. You go all over the map accepting quests from everyone and their fairy-grandmother. Most quests are kill fests or 'retrieve that item', but they're never repetitive and some are actually quite clever, like one where you turn a swamp into a golf course for the rich. Also, if you happen to have any trouble with your quests there's a fortune cookie system, where you can use cookies that you find to unlock hints on a quest. 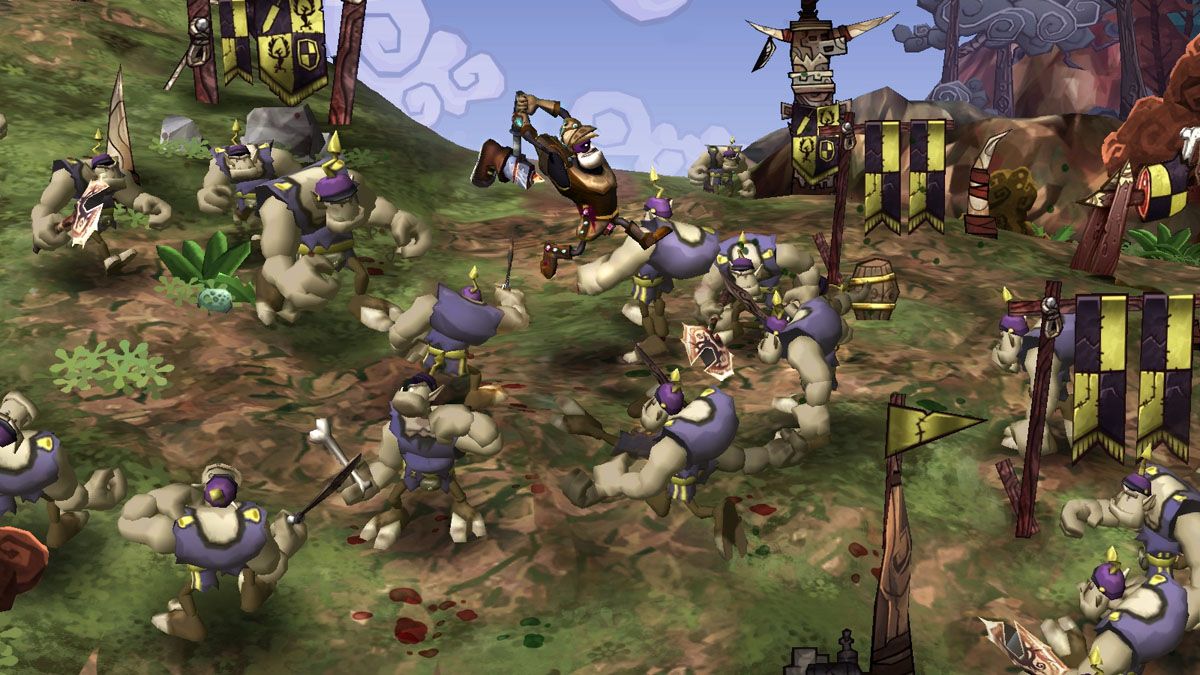 DeathSpank has a four button system for combat, where each letter button (X,Y,B, and A) can be assigned a weapon from your inventory. You can throw out combos with different weapons and it's pretty effective. Combat can be pretty clunky and overcrowded sometimes, it's difficult to know when to block enemies and when to hack right through them. Often there are too many enemies on the screen for you to find yourself through the chaos, but you'll usually be fine if you mash on the buttons.

DeathSpank also has his Justice attack. A well placed block or combo will activate you Justice ability, which is a super attack you can use only with certain items. The best weapons will have the biggest Justice attacks, plus later in the game you can use two Justice weapons together for a super attack. There are tons of weapons and armor in the world, a wide variety of both, and they all have wacky names. But, the inventory system is a little dated, it's usually overcrowded and cluttered and you constantly have to manage it. You have an 'item grinder' that lets you recycle items, but it's not the easiest way to clear out an overstocked inventory. 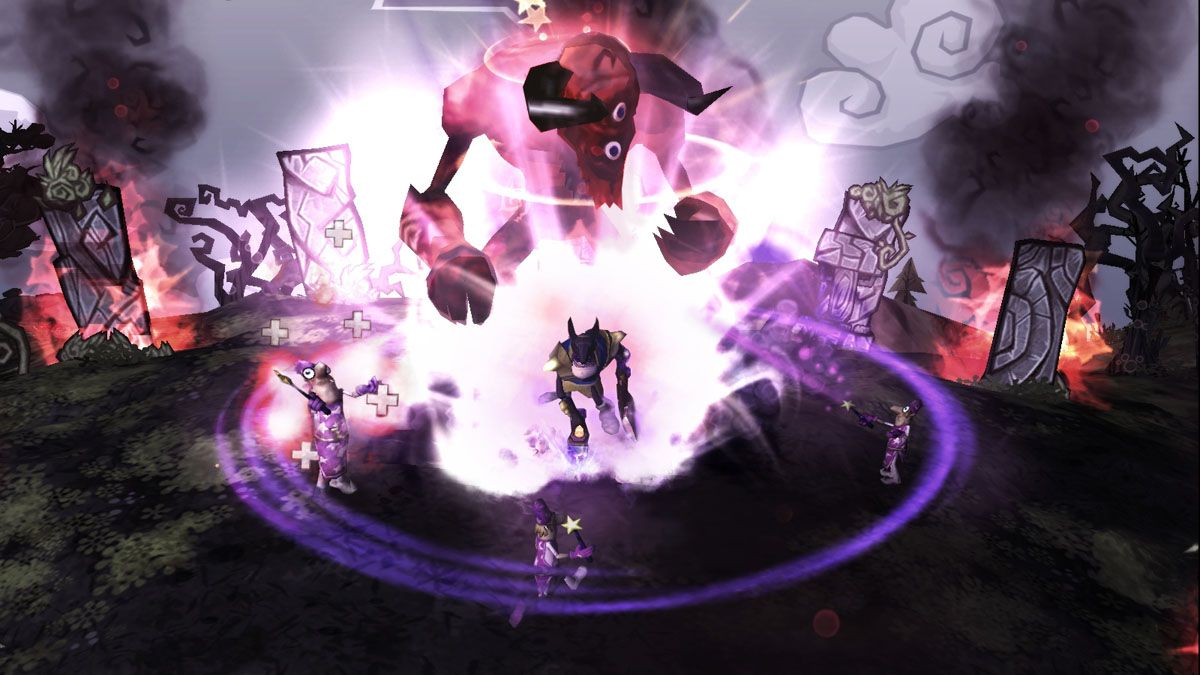 All in all, DeathSpank is like a cute storybook version of WoW, complete with the repetitive, but addictive combat and LOADS of quests. The art style and presentation is top notch and totally sells the game, it makes it unique. You'll laugh out loud, at least some times, with the clever writing. Plus, if you have a friend he can play Co-op as a magician and it's pretty fun. DeathSpank will keep you entertained, but it's simplicity will lose you if you don't like the gameplay.

Our ratings for DeathSpank on Xbox 360 out of 100 (Ratings FAQ)
Presentation
75
The unique, like-the-curve-of-the-earth world and fairy tale art style work well. A lot of the secondary characters and even DeathSpank are bland.
Gameplay
72
Violently addictive Hack n' Slash action. WoW style questing keeps you focused and the controls work well. There are lots of items and enemies to keep you busy, but the inventory system sucks.
Single Player
80
Very funny story. Longer than most XBLA games, you feel like you get your money's worth, but replay value is average.
Multiplayer
65
Co-op can be really fun, but no competitive multiplayer.
Performance
NR
The game runs fine, with load times that are few and far between.
Overall
76
DeathSpank is really addictive fun, the combat is quick and the world is lush. However it's not very deep, you'll get a few cheap laughs out of it. It's unfortunately repetitive and doesn't have much replay value. 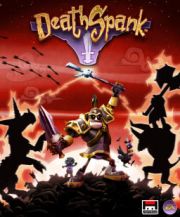 Our Review of DeathSpank
76%
Good
The Verdict:
"A clever fantasy RPG that's like a little World of Warcraft"
Game Ranking
DeathSpank is ranked #658 out of 1602 total reviewed games. It is ranked #67 out of 107 games reviewed in 2010.
657. DeathSpank
PlayStation 3
658. DeathSpank