E3 2010: We are taking flight with Ubisoft's sequel

There is a definite shortage of flight games these days. Back in the early 2000s, the genre was alive and well, particularly on PC. But as the next generation arrived, flight sims have become scares, and even arcade titles are hard to come by. In early 2009 though, Ubisoft released HAWX, a flight game based on a realistic war conflict. There was much fun to be had, but not without some issues. To correct and improve on the original, Ubisoft has recently announced HAWX 2, and we had a chance to see some live gameplay behind the scenes at E3.
The campaign in the sequel will be much more expansive, it includes three factions each with their own missions to complete. Players will take on missions for the Russians, British, and US military. It wasn’t confirmed if the player will be playing the same character in all the campaigns. The live demo that we were shown took place in the Russian campaign. The task was to escort a convoy through a mountain range, but as expected, things don’t go as planned. We are ambushed, and must destroy the enemy planes while protecting the convoy. 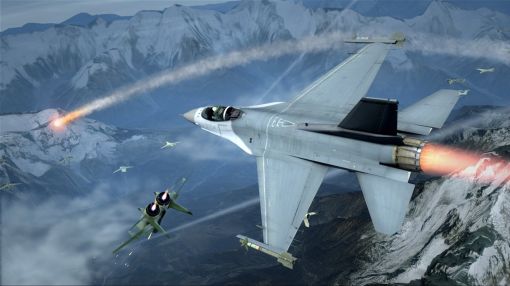 As the player maneuvered through the mountain ranges, some new gameplay elements came into the spotlight. First off, the game still features both the standard view and then assist-free view, giving the player freedom to look behind them and dodge incoming missiles. The developer mentioned that the team focused on creating a much more up close and personal combat this time around. The game’s AI has been improved, making it more difficult to both attack and dodge enemies. Significant time was spent in development to ensure that all planes no longer feel the same, each presenting their own advantages and disadvantages in combat and flight control.
As the player flew close to the ground, the mountain ranges looked quite good. The game will once again use the GeoEye system from the original, but much work has been done to increase the resolution of the images placed on the ground. There are also a lot of trees and other objects that make the ground more dynamic and life-like when flying low. From the demo, the scenery looked miles better than the original game, presenting the player with a nice view of some mountain wilderness areas. 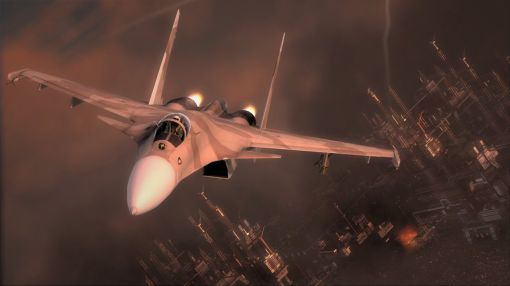 The second part of the demo showed a mission from the American campaign. This time around, the mission was taking place at night, and we were tasked with investigating insurgent attacks in the area. Things started off on a Navy ship, and we got to see the new takeoff mechanics. Though still in development, taking off seemed relatively simple, as one might expect. Once in the air, we reached the coast relatively quickly. Our targets were marked, and once again entering the bombing interface, we let go of some heavy artillery. As it crashed to the ground, we performed evasive maneuvers to dodge the enemy flak fire from the ground. Because we were using a stealth plane, it took the enemy a short while to detect us on the radar, giving ample opportunity to finish the bombing run.
However, once spotted, a full alarm was called and enemy planes began arriving on the airfields in preparation for takeoff. However, using some rockets, we were able to intercept most of the planes before they even took off, along with other enemy ground targets. Using night vision, spotting enemy anti-air guns was a bit easier, and they got dispatched quickly. Once the key objectives were destroyed, we received an order to return to the carrier. In doing so, we got the opportunity to see the landing mechanic, which looked more difficult than takeoff. When landing, the player can still use the IRS system in order to see the correct flight path to a successful arrival. This concluded the live demo.
The game is said to include 4 player Coop campaign or via system link. Online, battles can occur with up to 8 players. Taking much of what made HAWX good, and making it better, may prove very successful for Ubisoft. There are issues that will be addressed in the sequel, along with numerous improvements and new game mechanics such as takeoff and landing. What we saw during the live demo was a significantly improved title, with a lengthier campaign, more factions to play as and smarter enemies to defeat. If all goes according to plan, fans of flight will have a very fun title on their hands. HAWX 2 is set to ship this fall on PC, Xbox 360 and PS3.