Intense, but still too cold in the middle

The Siberian permafrost is melting. As it thaws, nitrous oxide enters the atmosphere. This gas contributes to the greenhouse effect, warming the Earth. It is also used as a nitro boost for crazy street racing. So when the Earth finally catches on fire, at least we’ll be able to go really fast. Strangely enough, the Serious Sam franchise works the same way; after thawing out this very old shooter, we get hot under the collar from all the action and can move around fast. The problem with the new games in the franchise is that they are not fully thawed on release. Siberian Mayhem is a standalone expansion to Serious Sam 4 and, despite having better level design, it struggles with horrible performance and lacks changes that might elevate it beyond what is merely a competent first-person shooter. 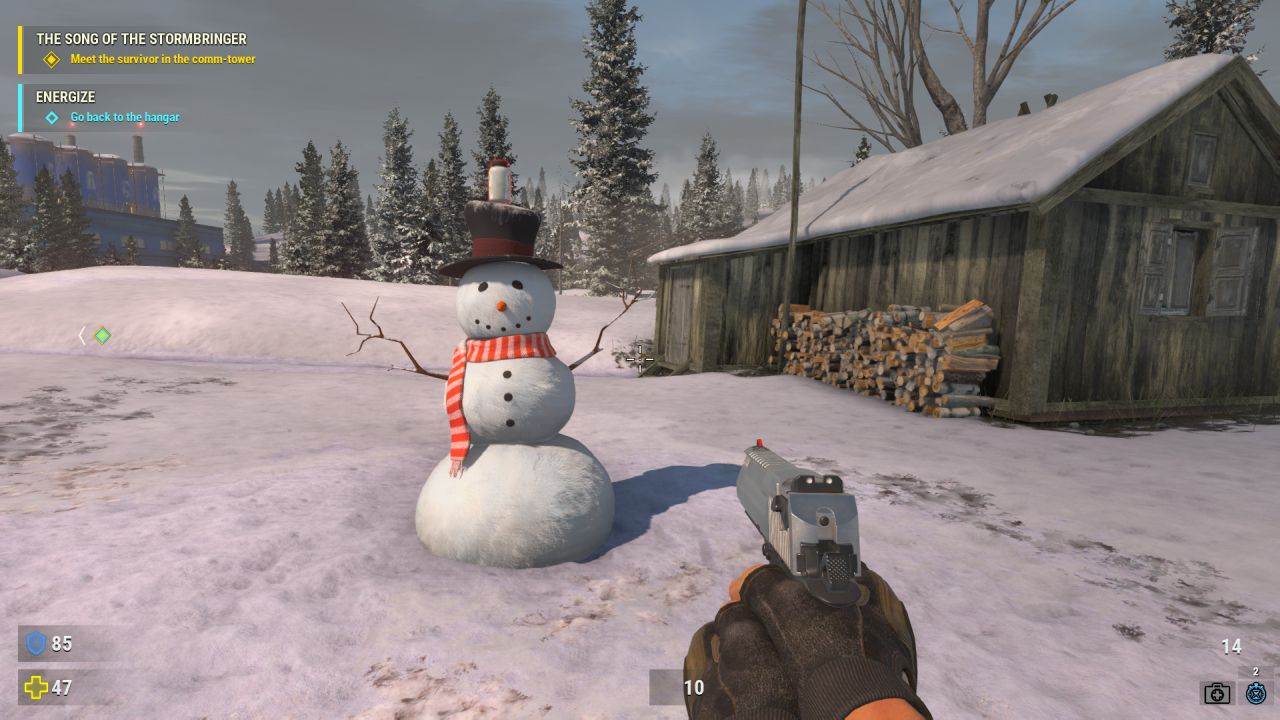 Siberian Mayhem is a “midquel” to Serious Sam 4. It takes place during the events of the main game, although how the two games link together is not that important. What we know is that Sam is after General Brand, a human traitor who has a holy relic and must be stopped at all costs. The rest of Sam’s team do not make an appearance in this expansion. Instead you, as Sam, will meet a small partisan group. Some tag along for a short time and help out, but Sam mostly fights the hordes alone across various locations in Russia. His infamous puns return, although thankfully their number has been reduced which increases their effectiveness. There is not much story here to worry about, and that is true to the franchise.

The Siberian landscapes are more interesting than those in SS4 because there is more variety. The diversity is reminiscent of some older shooters that had themed levels. Starting on the coastline, Sam will travel across frozen tundra, between oil derricks, across farms with windmills, through warehouses, inside bunkers, around quagmires, and along train tracks. There is even a haunted village to explore, to change up the tone. The levels look a little better than they did in SS4, due to unique structures and added detail, although the game is still far below the presentation of other modern shooters.

Levels are not just better visually; they flow better. Like Painkiller, there are tight, clever combat spaces that trap Sam temporarily. These require careful navigation while enemies spawn from all over. With obstacles and explosive barrels, moving the wrong way or using the wrong weapon results in death. Some tight spaces have jump pads, ala Doom Eternal, but these arcade arenas are out of place. When progressing through levels, not every enemy teleports into the world. A few might burst out from a window or emerge from a pipe. These rare circumstances sound like an insignificant change, but it connects the environment to the action. No entry in the franchise could be taken seriously without the wide open fields and rolling hills. The game has plenty of those in the back half, like a big hill that a swarm of headless kamikaze soldiers rush over. These open fields put a different kind of pressure on the player, requiring efficient use of weapons before the horde gets close. 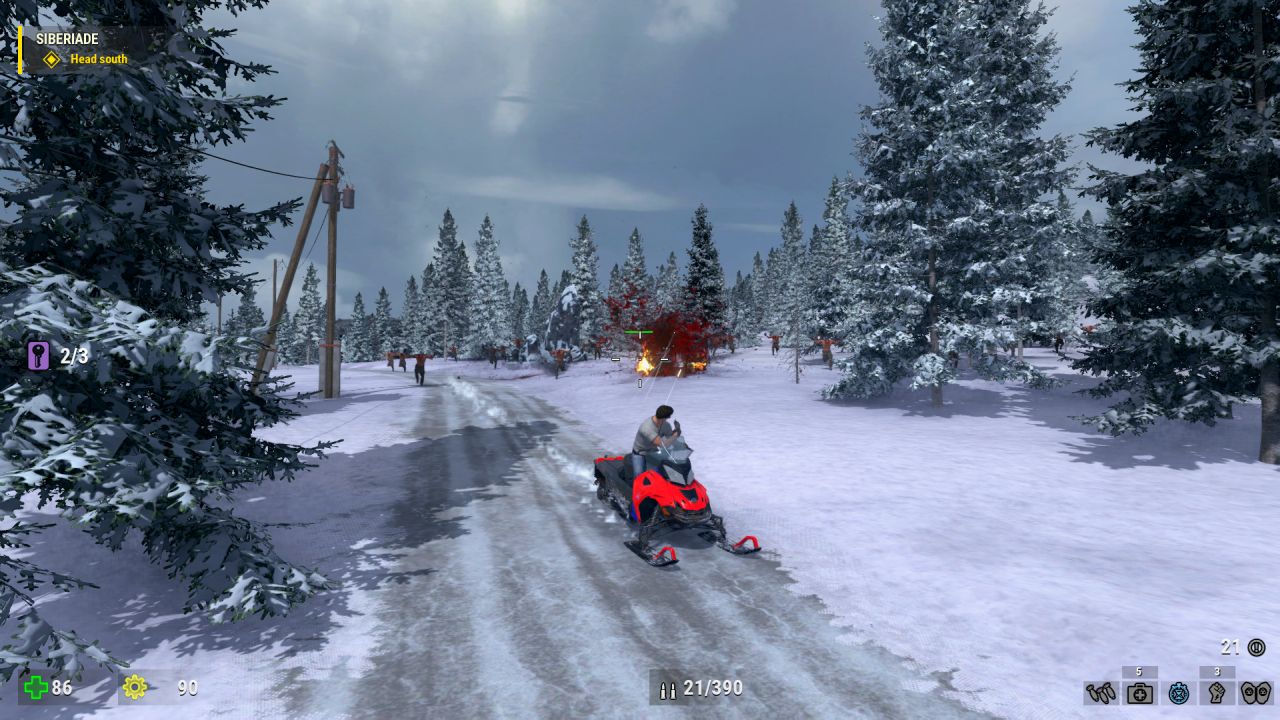 There are five levels in the expansion, but they are quite big, so it will take 5-6 hours to finish them when looking tentatively for secrets. The secrets are more interesting and easier to find this time. Many hidden items spawn enemies to create a new mini encounter. One secret area has a house on legs that fires rockets. A few others take Sam into a retro level. The battle that happens after finding a secret might negate the reward (i.e. draining armor or health), but the action itself is worth seeking due to the surprises. Side missions return too, usually offering a gadget (more on these later) or a character upgrade, and these would be worth doing even without a prize, because they feature substantial action.

Vehicles play a key role in a number of levels. During one mission, Sam can ride a snowmobile to explore a large space and optionally enter tiny outposts—these contain a new pipe puzzle that rewards the player with keycards to unlock another character upgrade point. This open structure works fine and is much like the equivalent mission in 4, with the motorcycle. Other levels feature a tractor or an ATV to drive, although using them is optional. There are also a couple of sections where Sam pilots a vehicle with high offensive power. One of these vehicles is a large mech suit with a chainsaw melee attack. The other is a tracked vehicle (or Humvee) that makes the best use of Sam’s puns. Both dedicated vehicle segments are slightly more fun than the equivalent in the base game, and probably could have gone longer.

While the levels are better, the changes are only small in the grand scheme of things. The series is languishing with bland, modern-day settings. With the pyramids absent again, the environments are rather boring for the intense action and alien threats. Given that portals and time-travelling are part of the series, Sam Stone should probably be fighting in more outlandish environments and/or historical settings. 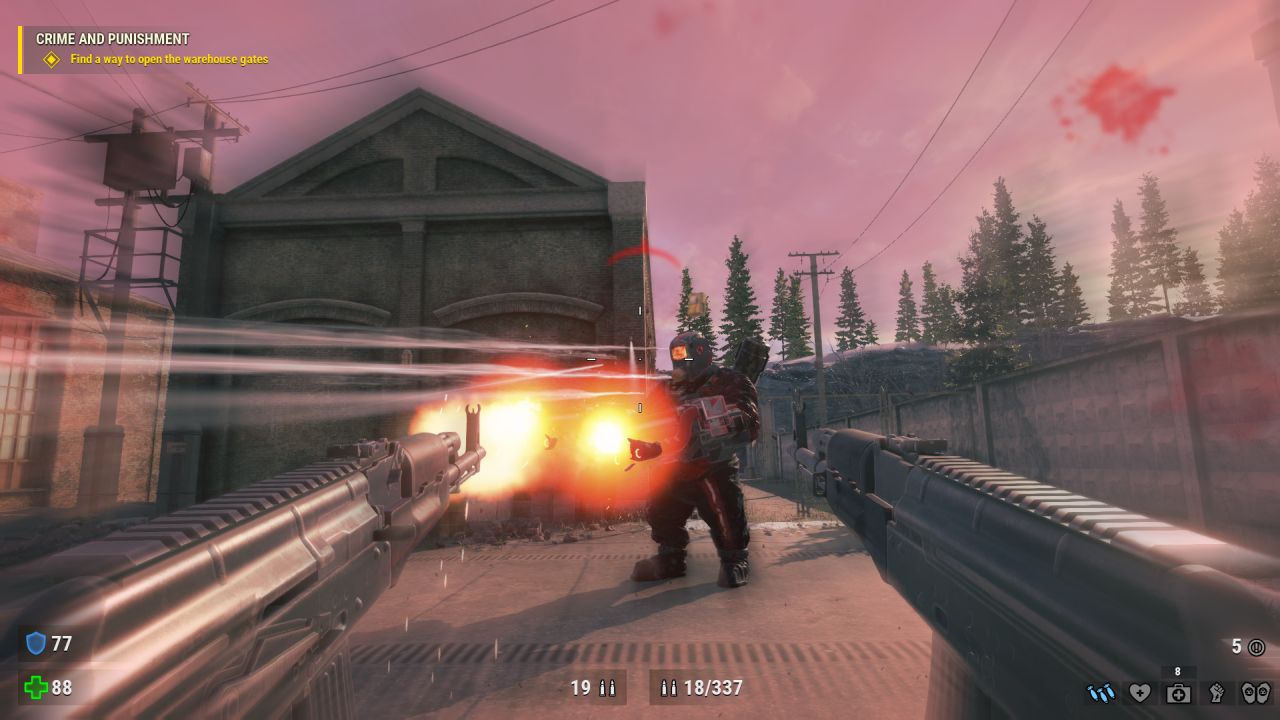 But despite the grounded level design, the shooting is rock solid. It is refreshing to come back to the series and find pixel-accurate weapons. There are some roster changes to the arsenal of SS4, but they’re tidy alterations. The new AK weapon replaces the assault rifle, functioning much the same but feeling better to shoot and being useful for most of the game. The Devastator and Sniper rifle have been culled in favor of a new crossbow, which functions like a mix of both, dealing high damage and at long range with the scope. And finally the Laser gun has been replaced with a new Raygun that fires a thermal beam at enemies until they explode (glorious!). Using the new weapons in dual wield mode (via character upgrades) is fun and there is enough ammo to use them for a while before swapping. With a smaller weapon roster, there is little overlap in functionality, which just makes for simpler action.

Gadgets are useful single-use boosts, and the two new ones fit in well. One new gadget is an artillery strike that works great in those big open fields, killing just about everything. The only downside here is that the aliens die behind plumes of smoke, hiding their gruesome demise. The other new gadget is a hoverboard that allows Sam to hop on and glide around at super speed. It also has a mounted weapon that functions like the Laser gun that was removed from Sam’s backpack. The other gadgets have been tweaked but all will get you out of trouble. 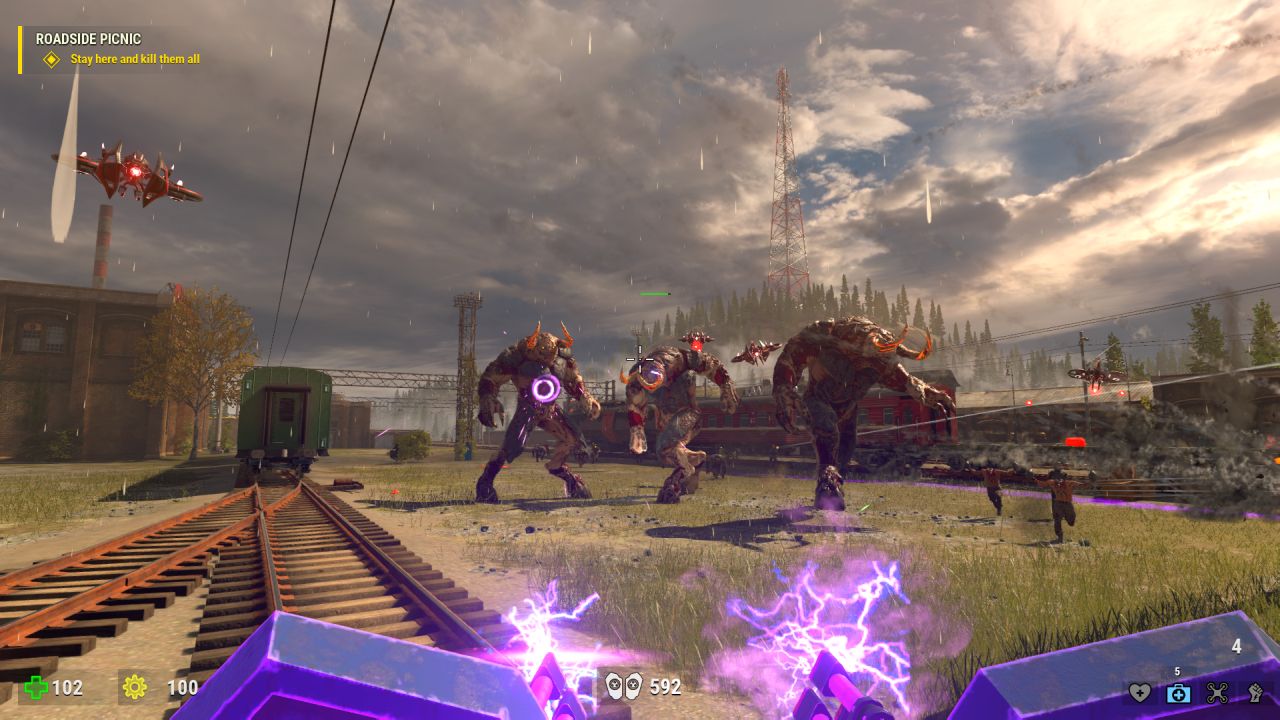 The enemies have not changed much from the previous games. There are a few new additions, like a one-legged frog-thing that hops from side to side. Another new opponent is less of an enemy and more of a defensive structure: a tower cannon that protects those big open fields; this stationary building rains down pain and has a weakspot to target, but that can be tricky with hordes charging from every which way. Most enemies you face have been in the franchise for some time, but that’s okay for a game that already has ample enemy variety.

But like Serious Sam 4, Siberian Mayhem runs horribly and has a slew of technical issues. The same texture streaming problems are back, turning characters into featureless blobs as the camera flips during cut scenes. Enemies still get stuck on the environment, although maybe less frequently than before. But the most annoying thing is that the game’s performance is horrible and worse than ever. The number of enemies on screen is not an indicator of performance either. Looking in certain directions smashes the framerate to pieces, even when not much is going on. The other persistent issue is stuttering that happens randomly, but more often during longer sessions, and these horrible stutters were not prevalent in the base game.

There is no competitive multiplayer in this expansion, and the cooperative online mode works about as well as it did in SS4. That is to say it’s fun and functional, with basic features like a server list and gameplay options. But there are problems when joining 1-3 other players, ranging from animation/model glitches to general network lag. Joining a server could mean entering a level a mile behind the others, due to long load times (even on an SSD). Trying to dodge rockets with a modest ping is hard because the rockets do not seem to be in sync with what is on screen. Even the enemies might only target the host player, which is rather odd when you’re standing in the middle of a horde. If you had fun with the cooperative mode in SS4, then expect about the same, but there is certainly room for improvement. 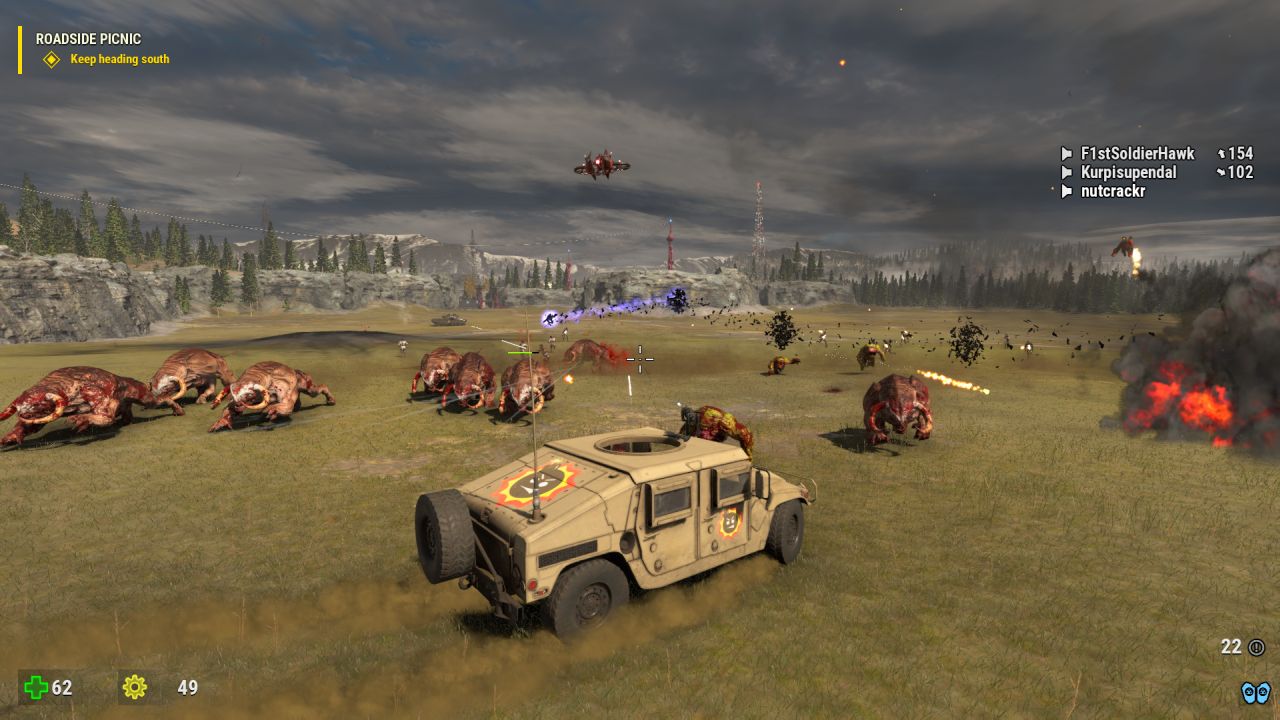 Siberian Mayhem could have been a good standalone expansion for the old-school shooter franchise, but it trips up on the technical side. It has marginally better level design than Serious Sam 4, and the weapon roster is efficient. Most of the vehicle sections and secrets are done well too. The levels are large and more interesting, even if the insane combat still deserves more outlandish world design. But the game does not look anywhere near as good as it should for something that runs so poorly. So this six-hour expansion is difficult to recommend, unless you love the series so much that it doesn’t matter when it’s served cold.

Our ratings for Serious Sam: Siberian Mayhem on PC out of 100 (Ratings FAQ)
Presentation
60
Level design is better than SS4, with more diverse environments and better structure. But this is still not a good looking game, with ugly characters, bland environments, and texture streaming issues.
Gameplay
80
Combat is cleaner and efficient, with both large open fields and tighter spaces that test players in different ways. But the changes are minor and this is still mostly the same experience as Serious Sam 4.
Single Player
60
Sam’s puns have been toned back, thankfully, but the story is thin. Some new characters appear but they add little to the experience. At 5-6 hours long, the expansion offers reasonable value.
Multiplayer
65
The cooperative action works about as well as the base game, so at least it functions and is generally enjoyable. The technical issues can be exacerbated online and the network performance could be better.
Performance
(Show PC Specs)
CPU: AMD Ryzen 5 3600
GPU: XFX RX 480 GTR Black 8GB
RAM: 16GB DDR4
OS: Windows 10 Pro 64-bit

50
Performance is generally horrible, with horrendous and random stutters. Enemies might get stuck a little less than before, but this is still too often.
Overall
67
Siberian Mayhem improves on Serious Sam 4 in several areas, except where it mattered most: performance. The expansion’s poor framerates and tech issues are a shame when it has better level design and fun secrets. 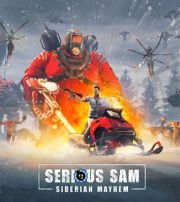