A tale not completely fulfilled

Although I wouldn't call myself an aficionado of the genre, I do like getting invested in turn-based strategy games from time to time. Back in the old days, I wasted countless hours in Final Fantasy Tactics, while more recently, XCOM: Enemy Unknown took up a large portion of my free time. Lately I've been looking for something that would scratch that itch, and Reverie Knights Tactics just so happened to come at the perfect time. 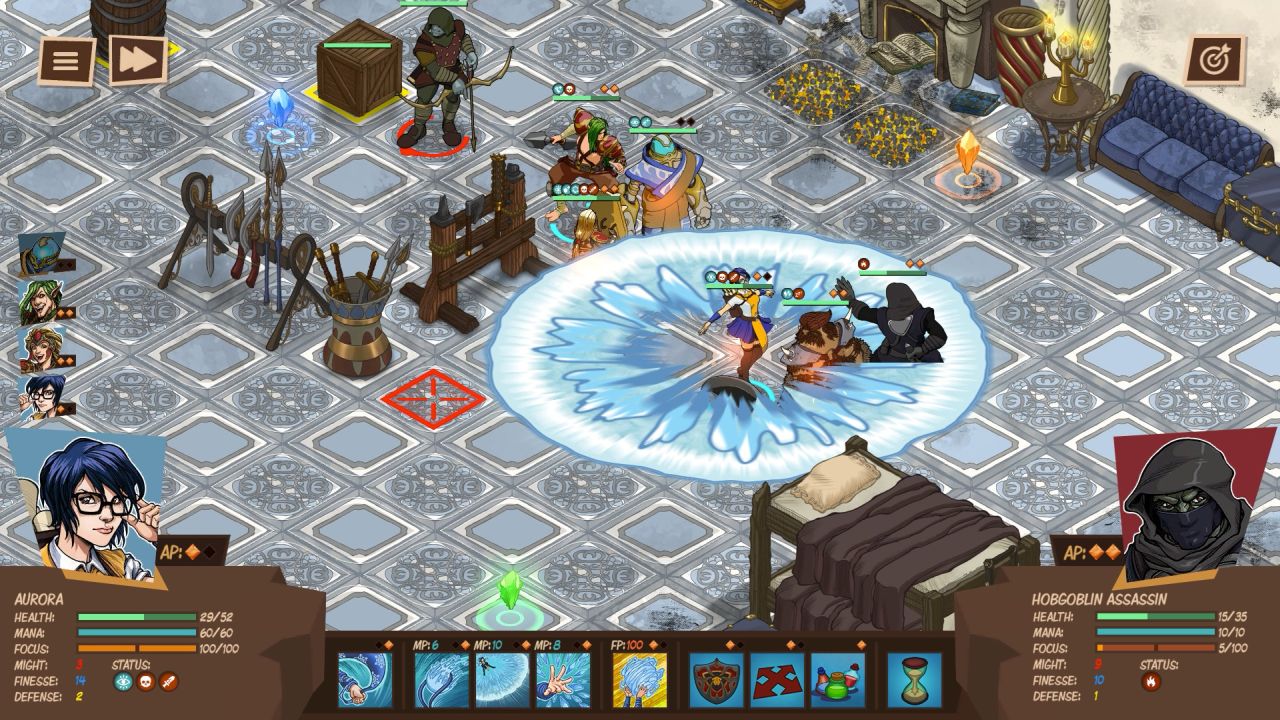 In the universe of Reverie Knights Tactics, knowledge and wisdom are highly revered. Keeping all knowledge of the world is a task that falls to the group known as the Order of Tanna-Toh. These worshippers of the goddess of knowledge must often brave treacherous territory to extract wisdom where they can. Such is the case with the lost city of Lenórienn, a former elven stronghold that has since fallen to goblin foes. When the first group of the Order of Tanna-Toh goes missing during their mission to find Lenórienn, it falls to inexperienced cleric Aurora to lead a second expedition. Along with her best friend Brigandine, Elf guide Fren and guardian Hellaron, Aurora will learn what it takes to be a true leader.

If you couldn't tell from the presence of elves, goblins and magic, the title leans heavily into fantasy tropes. It's not mentioned upfront, but the world of the game comes from Tormenta, which is a long-running Brazilian role-playing game. I would like to think that pulling from this entity would have led to a fully fleshed out world, but I was disappointed with the lack of story detail given. The biggest issue is that the four core cast do not get the character development they need. Outside of Aurora, who you make the choices for, the other three are only defined by their broad traits. Brigandine likes to eat! Fren is a loner! Hellaron is stoic! These are fine attributes, but ones that would serve as starting points, not their entire personalities. The rest of the named characters you meet, whether good or bad, suffer from this same problem as well.

Another big issue with the plot is that Reverie Knights Tactics only feels like the beginning of the story. Not to spoil too much, but the adventure ends on a definite sequel set-up. This is a dangerous step for a smaller title such as this, because there's always a chance that it will never be followed up on. If that were to unfortunately happen, then it feels like this quest would have all been for naught. It took me only around 13 hours to finish the campaign, so there could have been some additional time provided to either flesh out the universe or provide a stronger conclusion. Instead, it just feels like we only scratched the surface of where this story could have gone. 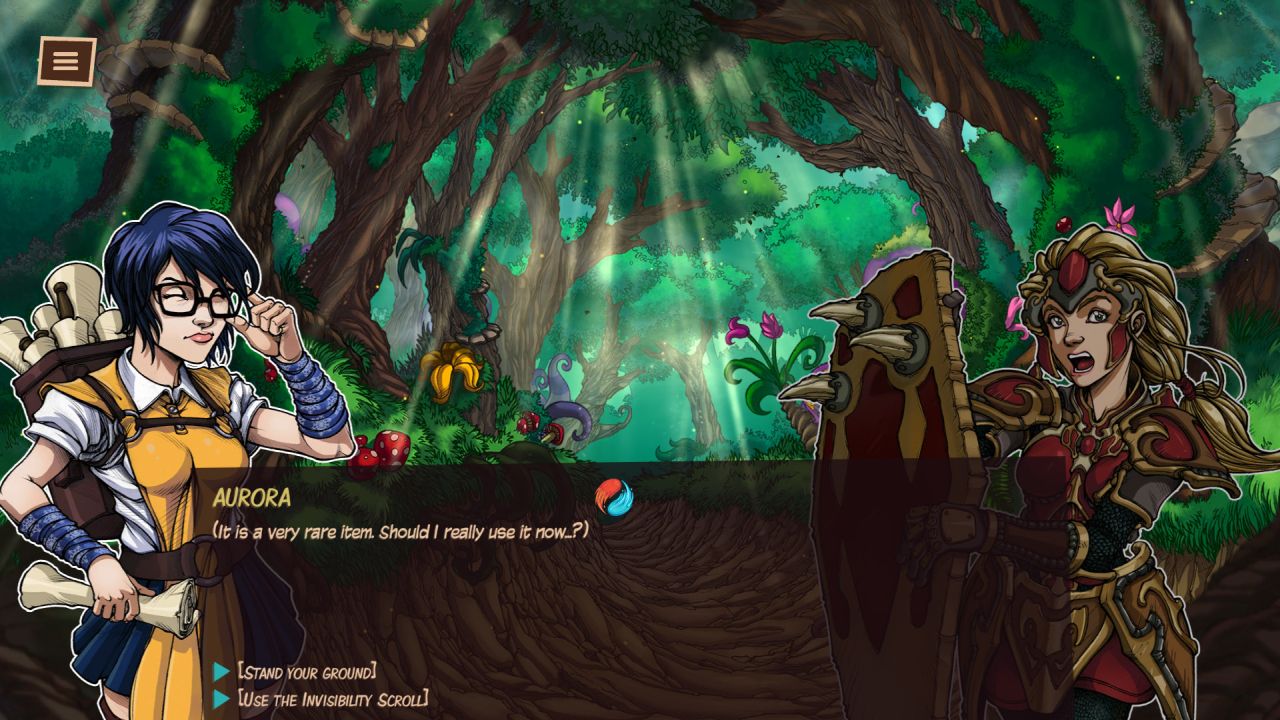 Unlike traditional RPGs, there's not a big overworld for your team to explore in the game. Instead, you have three different world maps to explore, with each one containing a base for you to rest at. The first base you reach, which is the landing area for the expedition, will be the one that you will likely visit most. It's where you go to bake food, craft bombs, and acquire new equipment. The other two hubs house side characters, and you can chat with them to unlock some side-quests as well. Each of the world maps contains a dungeon for your team to traverse through.

Upon getting into a dungeon, you get to the real meat of the game. Each battlefield you enter is broken down into a unique grid. Some may include multiple hazards for you to utilize, others may be condensed to force you to fight up close. When a battle first begins, you will have the option to place your characters in specific formations. You can't place them anywhere mind you, but you can at least set them up in a way that can help execute your battle strategy. From there, the action breaks down into typical turn-based strategy action. You have two action points to spend per character. This covers both your movement on the grid and use of actions or items.

The four-member crew can be broken down into two groups. Hellaron and Aurora are proficient in magic, while Fren and Brigandine are better working with weapons. As you level up, you will be able to unlock new abilities. You can only have three equipped at one time, though, so it's critical to figure out what attacks suit your style of play. The key to success is learning how to best use the party members in conjunction with both each other and what's littered across the battlefield. For example, I could use Aurora's long-distance attacks to destroy explosive barrels next to an enemy. If you have two of your characters within one space of an enemy, you can also unleash unique team attacks. The latter portions of the title love to stack the deck against you, so you need to take advantage of every chance you get. 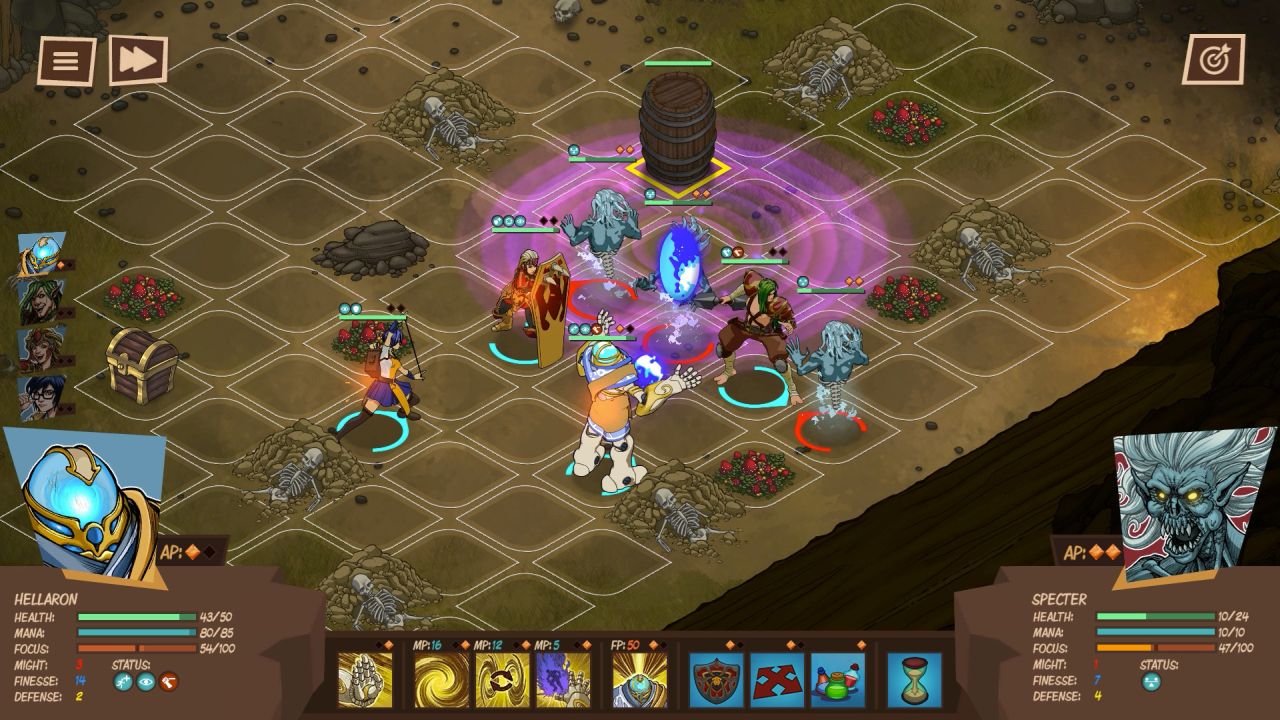 There's a comfortable competency to the gameplay of Reverie Knights Tactics. It's not trying to reinvent the genre, and it does what it tries to do rather well. However, I do wish there was a little more variety to the gameplay, particularly when you aren't in battle. Outside of battling, there's just not much else for you to do. There are a few puzzles to solve, and you can pick the lock on some treasure chests, but that's about it. The lack of variety makes the final chapter a slog. You just move from battle to battle with nothing in-between the break the chain. One or two additional activities, or even more dialogue sequences would have really helped spice things up.

Based off the same artwork found in the Tormenta RPG books, Reverie Knights Tactics has solid visuals. The entire title boasts hand-drawn artwork, the battle locations have a surprising amount of variety, and the character models are large and pleasant to look at. When not in motion, you can tell that a lot of care and work went into these models. I will say that there is a slight stiffness to their animations when moving or attacking. It almost reminds me of the animation style you would have seen in kids cartoons from the early 2000's. There is no voice acting in the title, but the soundtrack does a decent job of setting the mood. It's your standard fantasy music, but it works in the context of the game.

Reverie Knights Tactics may not win any awards for originality, but it scratches that strategy itch I had been dealing with. The tactical gameplay affords you plenty of options on the battlefield, and the challenge is stiff enough to force you to use your noodle. However, it feels like the title just needed more development in most areas. The characters needed to be fleshed out more, the plot could have been wrapped up in tidier fashion, and there are could have been more for you to do outside of battling. As the first effort from 40 Giants Entertainment, this is still a promising debut. I just hope they get the chance to expand upon this universe in the future.

Our ratings for Reverie Knights Tactics on PlayStation 4 out of 100 (Ratings FAQ)
Presentation
70
Although the animations may come off as a little stiff, the color artwork still looks pretty good. Both the art and music tap into traditional fantasy tropes, but they fit the tone of the title.
Gameplay
65
When you are doing battle, Reverie Knights Tactics provides a satisfying experience. The turn-based battle system won't overwhelm you with depth but offers variety for you to take advantage of. However, there's not enough engaging moments outside of combat.
Single Player
50
There's a decent set-up at the heart of the title, but the lack of characterization for the main cast and a weak conclusion sours the adventure.
Multiplayer
NR
None
Performance
80
The title takes a little long to load at certain moments, but for the most part it runs solidly.
Overall
66
I enjoyed my time with Reverie Knights Tactics, and I think there's a solid foundation of a strategy title here. However, the disappointing finish to the quest, and lack of gameplay depth outside of combat cast a cloud over the entire experience. 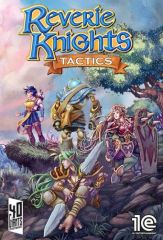