Learning to fight with your head

Appearances can often be deceiving. There are countless examples of a game looking like one thing, only for the finished product to be rather different. When Scarlet Nexus was first unveiled, I thought I had a pretty solid idea of what it was. A third person action game with a slightly more anime take on the hectic efforts you would normally expect from Platinum Games or Capcom. I felt even more certain of that opinion after taking the title's demo for a spin. However, the finished product is a much more varied adventure than I would have imagined. 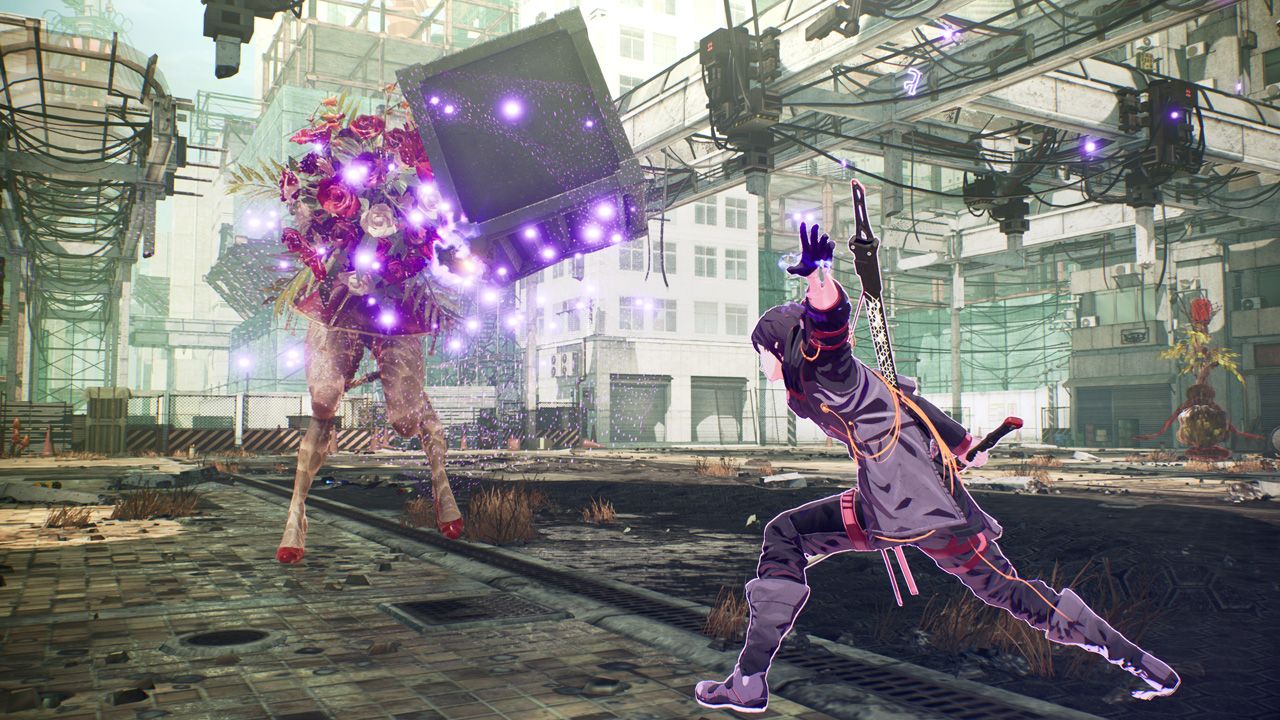 In the alternate reality Scarlet Nexus takes place in, much of humanity has been blessed with powers of the mind. Most of them fall on the lower-power scale, but there are stand-outs among them that wield powerful abilities. These powers can range from pyrokinesis to psychokinesis, and all the kinesis' in-between. These select individuals are typically drafted into the Others Suppression Force, or OSF for short. This special force squad is tasked with disposing of creatures known as Others, which are a frequent hazard in this universe.

While there are numerous members of the OSF, players step into the shoes of either Yuito Sumeragi or Kasane Randall. Both are new recruits to the force, but each has their own unique personality and abilities. Kasane is a stoic combatant who seems to really only care for the well-being of her sister, while Yuito is more carefree, but comes from a prominent family. Although each of the campaigns overlap in points, they also deviate in significant ways. In order to fully experience the story of the game, you'll need to play through both sides.

There's a lot going on in the world of Scarlet Nexus, and the title doesn't always do the best job of explaining everything to you. It's particularly rough in the early-going, as it throws a lot of world-building facts and characters at you in a short amount of time. It can be tough keeping track of things, but after a few hours, I was able to fully get my bearings. And I'm glad I was able to, as the world of the title is fascinating. The universe Bandai Namco has created feels entirely unique, even if it does embrace some traditional anime tropes. I wish I could get into some of the more conspiracy-rich details of the story, particularly its views of the military, but in doing so I would be spoiling major moments.

Both Kasane and Yuito are adept at psychokinesis, but each character still has their own unique fighting style. For the calculating Kasane, keeping a distance is key for success. She utilizes throwing knives to stagger enemies from afar. They might not be the strongest weapon, but their speed and combo ability make them a formidable dealer of death. Yuito is someone who prefers to get up close during the heat of battle. His katana may lack the speed and grace of Kasane's weapons, but it makes up for that difference in power. Both characters' weapons also help recharge their psychic abilities, and Yuito's seems to have a slight edge in this department as well. 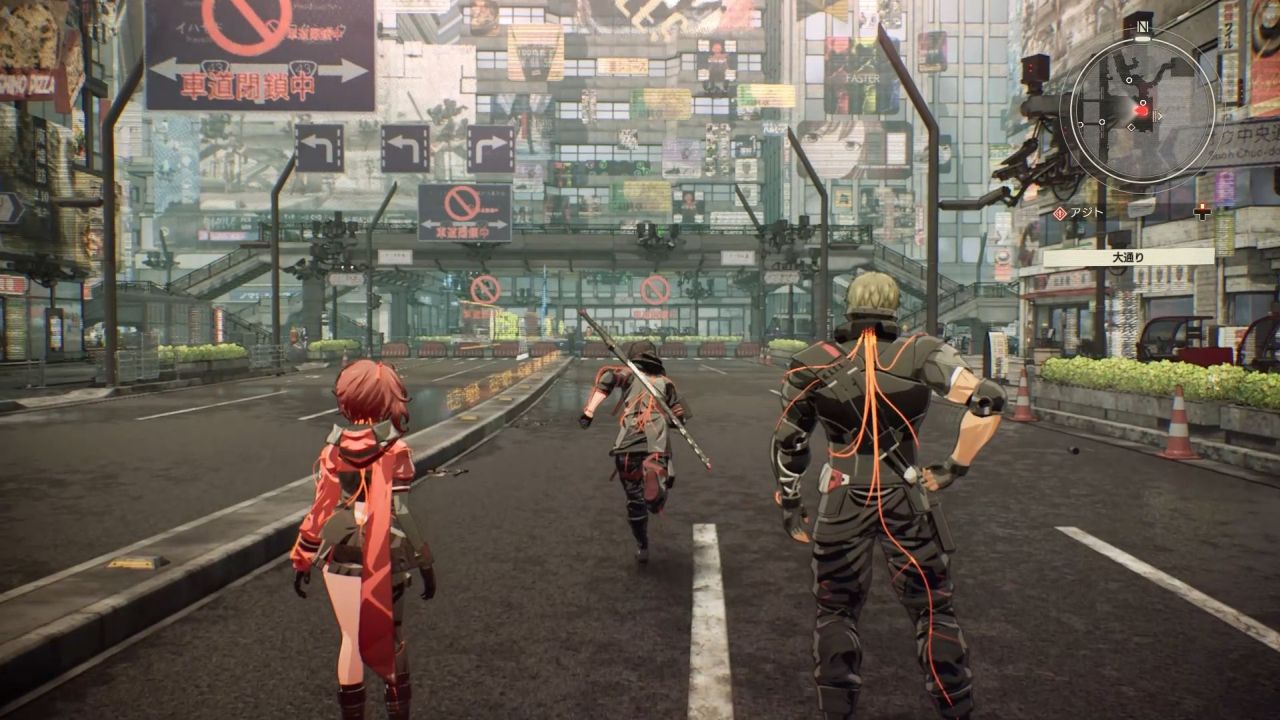 The weapon-based combat of Scarlet Nexus would be solid enough on its own, but what elevates the combat to the next level are the telekinetic abilities you wield. While on the field of battle, you can throw almost any object you can find at enemies. It's all handled with the press of a button as well, so you can easily fling around a dumpster, while dodging an attack from an Other. A key component is also learning how to properly chain together your attacks. Perfectly timing throwing an object after coming out of a combo will do more damage than doing either of those on their own.

What I wasn't expecting coming into the game were the RPG-lite mechanics it possesses. Picking which other members of the OSF will accompany you on a mission carries great importance. Not only do they all have different skills, but you also have the ability to borrow some of their powers. These powers can then work in tandem with both your latent abilities, and another member of your party. For example, you could use the electric ability of one member to juice up both your regular attacks, and your telekinetic attacks. You are given great power in the game, and it feels great to take advantage of it.

During any one battle, there can be a lot to keep track of. From the action on-screen to the powers at your disposal, it could have been tough to manage. However, Bandai Namco have crafted a combat engine that is not only easy to learn, but one that is also fluid enough to keep up with the action. Scarlet Nexus is certainly not the first title to utilize telekinesis, but I can't think of another game that has made it felt as enjoyable to use. Even during some of the more difficult battles in the game, I constantly felt a sense of power that other titles have failed to reach. The only issue I have is that the lock-on isn't as responsive as I would have liked it to be. I often had trouble locking onto the closest enemy, and switching from one to another could have been handled better. It's still easy enough to attack them without locking on, but when it comes to throwing objects, it may take a little work to get a lock on your desired target.

As you go through the campaign missions, you'll be rewarded with Brain Points for defeating Others. These points can then be deposited onto your Brain Map, which serves as the leveling-up system for the title. The map is spread out into distinct areas, with more paths opening up as you progress through the story. One path leads to new skills for you to learn, such as double jumping or new combos, while another improves your latent telekinetic abilities. I tend to spread my BP out evenly, but the option is there to focus on one specific branch if that's how you choose to play. 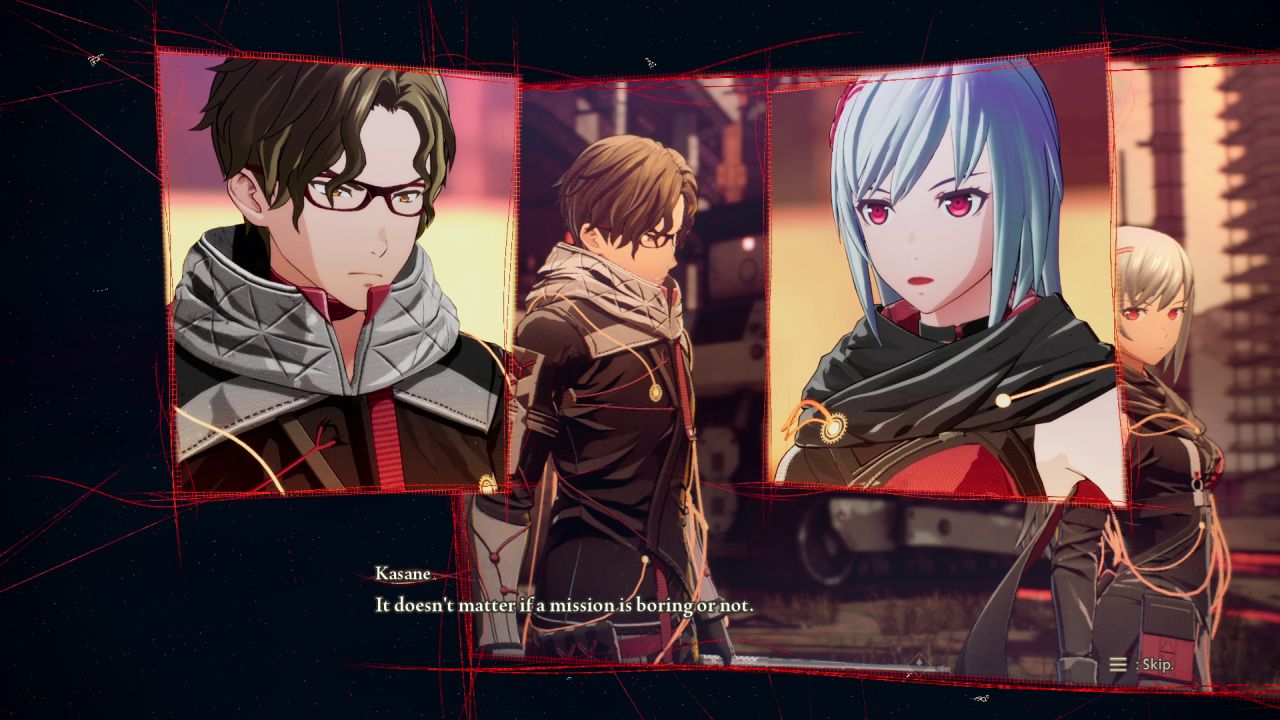 Despite the decent-sized world, there is really only one merchant of note. That would be Satori the Archivist, who also serves as a save station. Fortunately, he tends to pop up frequently, so if you are in a bind, it should be easy enough to track him down. Using currency you acquire through defeating enemies, you can purchase a wide variety of items from the shop. These include consumable items like health potions and status buffs, new weapons for you and the other OSF members, or plug-ins that boost specific stats and cosmetics. Items can also be occasionally found during missions, and can then be sold back to Satori if you don't want them.

Outside of buying and selling to Satori, there's also an option to exchange items. When you defeat an enemy, they'll sometimes drop specialty items. They tend to carry odd names such as Other Ecology C or Pendu-type Suppresion +. Satori will take these items for you in exchange for certain goods that otherwise may be too expensive or not even for sale in the main shop. These include improved weapons, or gifts that can be given to OSF members in order to strengthen your bond with them. There can be a lot of random items to keep track of, but the game does a good job of keeping track of everything for you. This may not be as deep as some of the item crafting engines found in full-fledged RPGs, but it adds some nice depth to the title.

When you're not saving the world from Others, you can go on Bond Missions with your squad mates. These moments take place during designated stand-by phases, which typically pop-up after the completion of main story missions. These side-quests give some much needed depth to the other members of the OSF. And even if you don't particularly care to learn about them, these missions also help raise the psychic bond between your character and the desired teammate. This will help you become a more effective duo on the battlefield. It's unfortunate, though, that these are about the best you will get when it comes to side-missions. For a title that borrows from the world of RPGs as much as it does, the side-quests presented are pretty weak. The tasks given are sub-standard, and the rewards doled out aren't much better. Often you just end up receiving an item you would otherwise find on the ground, or one that is easily available from a shop.

How you feel about anime will color what you think about the design of Scarlet Nexus. I'm okay with the genre, so personally, I think the world of the title is fascinating. It's self-described as “brainpunk,” which I guess means like a more colorful cyberpunk. Think bright neon colors mixed with sprawling urban environments. The environments are lacking in detail in some regards, and certain locations are revisited far too often, but the general aesthetic of them is pleasing to me. The designs of the OSF team members and Others fare better. Each individual member of the team has their own cool look and style. Again, some of them fall into anime tropes, but if you can deal with that, you should be alright with them. The Others have some techno body-horror designs going on. Some of them are genuinely uncomfortable to look at, which I have to imagine was the goal of the design team. 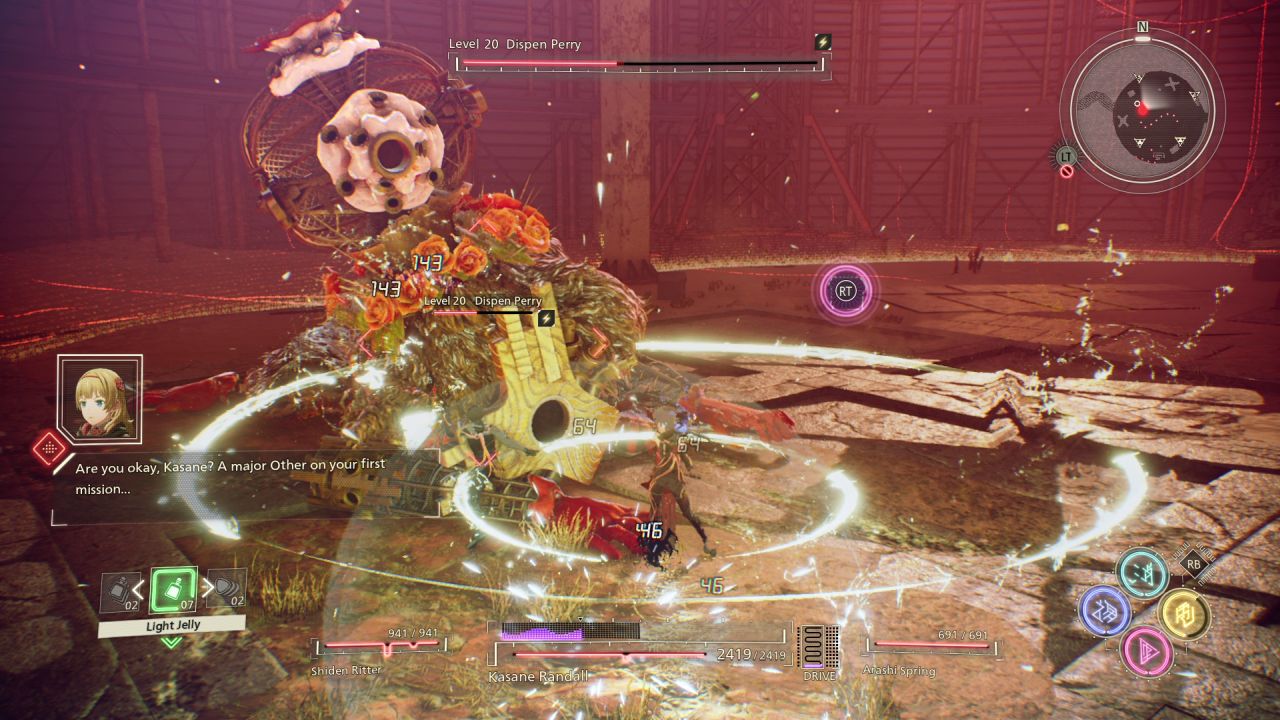 Coming into Scarlet Nexus, I was expecting a solid, if unspectacular action title. What I got was a flashy action-RPG that blends its gameplay mechanics into a buttery-smooth combat engine. The telekinetic power you wield is a true power trip. And while the anime tropes of the story and characters can be a tad stale, there's still a surprising amount of depth given to both. Between the invigorating world design and complicated story, there's an excellent framework for a new franchise here. If Bandai Namco choose to revisit this world, I'm excited for what would come next.

Our ratings for Scarlet Nexus on PlayStation 4 out of 100 (Ratings FAQ)
Presentation
75
Despite the over-use of some locations, the world of Scarlet Nexus is a breath of fresh air. The combo of cyberpunk and anime works well, and the character and enemy designs are excellent.
Gameplay
84
The fast-paced action is handled extremely well. Moving between weapon-based attacks and telekinetic powers is a snap. The wonky lock-on system needed some additional refining, however.
Single Player
76
Deeper than it appears from the surface, Scarlet Nexus will constantly keep you guessing. Although the characters open up over time, their personalities can grate at times.
Multiplayer
NR
None
Performance
80
Playing on the base PlayStation 4, the action held up well. The performance may not be as fluid as it would be on current-gen consoles, but this version is better than you would expect.
Overall
78
Scarlet Nexus succeeds largely on the back of its engaging gameplay. Bandai Namco have crafted an excellent combat engine that lets you run wild with power. The characters could have used some sprucing up, and the repetition of the environments is disappointing, but the framework of a future franchise is here. 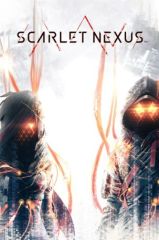 All videos for Scarlet Nexus (4)
Advertisement ▼