Although it seems things are getting better, the world has been in a tough spot for the past year. With COVID-19 being a major concern, it's been a scary and exhausting last 12 months. For many, the best way to help alleviate these burdens has been to hop into the world of a beloved videogame. I certainly have done it. And while many of the titles I spent time with have been on the more intense side, sometimes you just want to relax. This line of thinking could be used to explain why the likes of Animal Crossing: New Horizons and Stardew Valley have the large audiences they do. For this tranquility seeking gamer, though, my first steps into the genre come with the arrival of Cozy Grove. 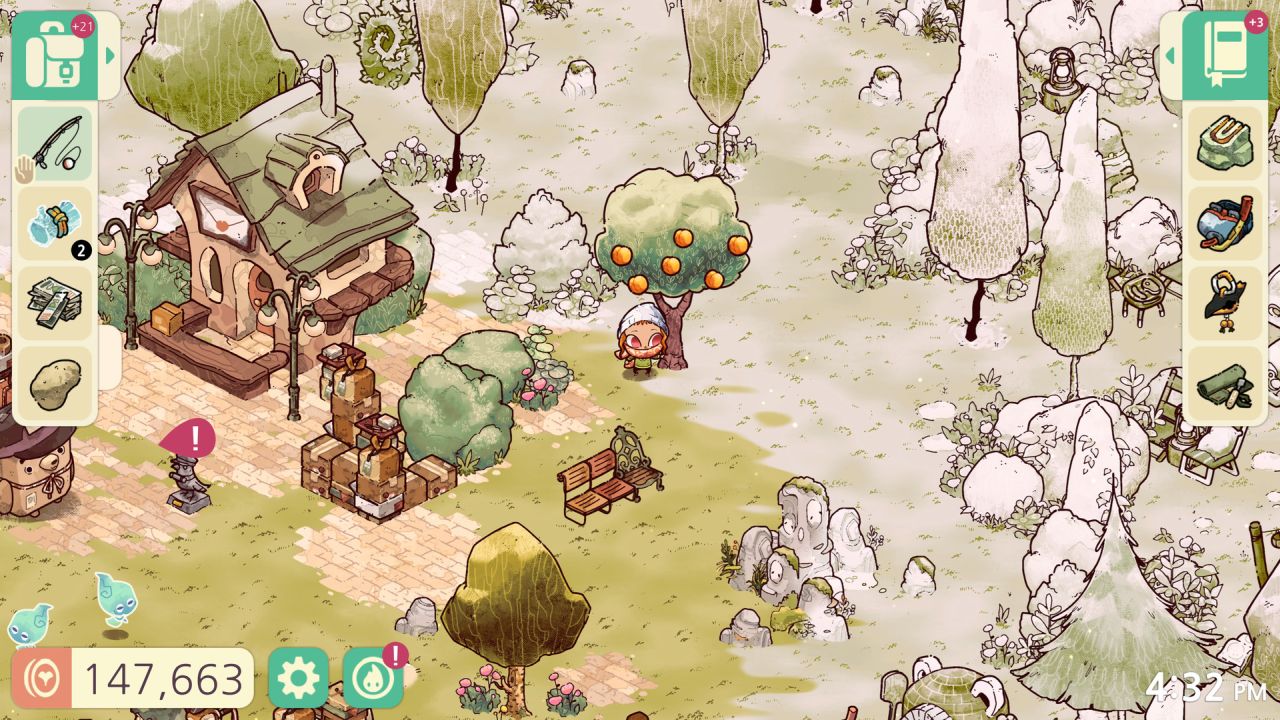 Set on the titular island, you are what is known as a Spirit Scout. Having arrived at the island via boat, you soon find yourself essentially stuck there due to said boat drifting away. Fortunately, there is also an abundance of spirits inhabiting the island for you to befriend. There's Flamey, the sentient bundle of fire that helps illuminate Cozy Grove, as well as the spirts of bears that have since passed. If there's a central mission to your endeavor, it's to fully illuminate the island. In order to do so, you'll need to help the ghost bears out with assorted tasks.

Most of the tasks really just call for you to find a specific item and return it to whoever is looking for it. For example, Patrice Furbac, the mail delivery bear, often loses mail parcels. He'll ask you to track them down, and you'll be rewarded for your efforts upon completing the task. As you progress, some of these tasks become a little more intricate. You may need to round up certain ingredients or items that need to be crafted using other items. Regardless of how long it takes you, most of the main tasks in the game follow this same pattern.

In the title's defense, you tend to be rewarded handsomely for competing these tasks. Not only will you receive important supplies or currency, but you'll also receive a spirit log. The spirit log can then be fed to Flamey to unlock new parts of the island. Additionally, by helping out the bears, you'll slowly learn more about their past lives. What they were responsible for on the island, and perhaps why they have been stuck haunting it since their passing. And considering how personable these ghouls tend to be, it's a treat getting to learn more of their history. 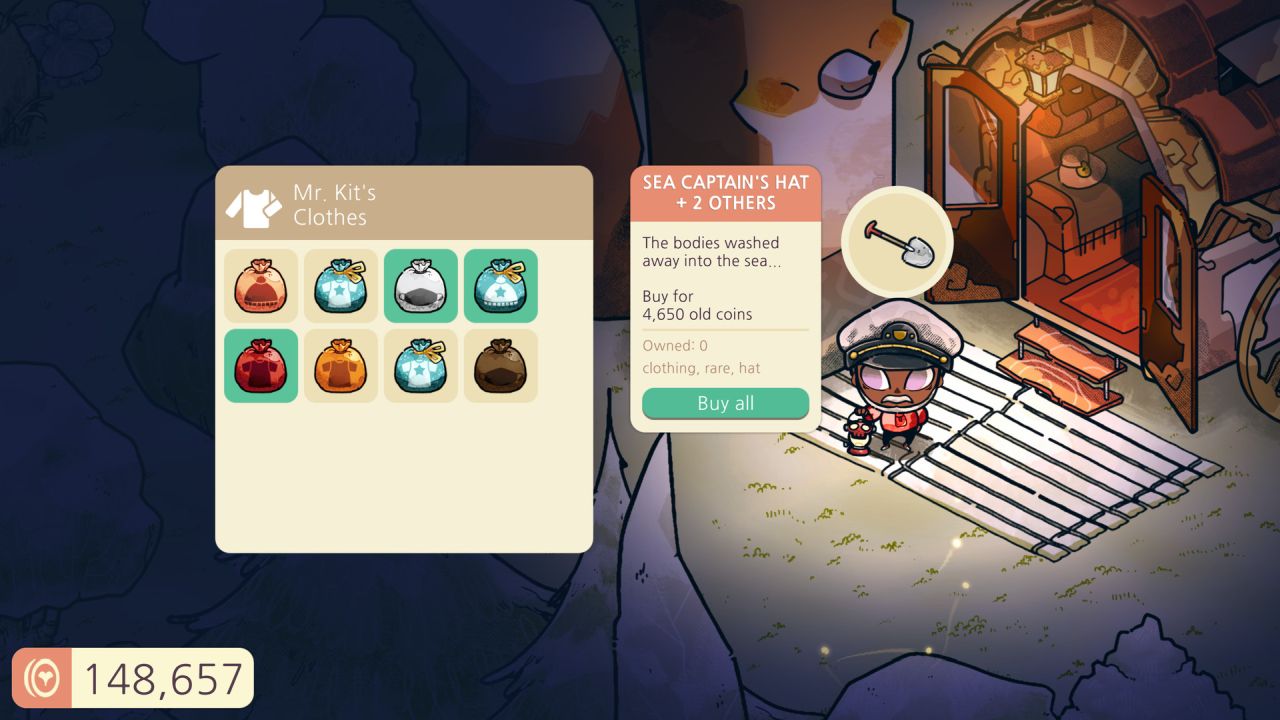 To alleviate some of the monotony that may arise, Cozy Grove limits you to how much you can advance the story on a daily basis. The title utilizes an in-game clock that reflects what the actual real-world time is. Each bear only offers you one new quest per day, and once you complete it, they don't have anything else for you to do. Some of these quests won't even advance the story or world, as Flamey will let you know. If there are no more spirit logs to be earned for the day, you will be made aware of it. Obviously, you can keep playing the game once this occurs. But if you are someone who looks to always be pushing the narrative forward, this may be a disappointing set-up.

How you feel about the allotment of time will ultimately color your feelings regarding the title. Getting stuck on a day where you can't complete your task due to missing resources, or having a day where the quests are too similar can be annoying. With my current work schedule being what it is, though, I don't mind this set-up. Instead of forcing myself to play hours of the game in one sitting, I can devote an hour of my morning to completing my daily tasks. Sitting down with a cup of coffee and visiting the island has become something of a morning ritual for me. By the time I have to sign on for the day, I know I have gotten the most of time from the title.

When you aren't collecting spirit logs and helping bears deal with death, you'll be doing typical island upkeep in Cozy Grove. There is an abundance of resources for you to collect. Holes can be dug in order to uncover sticks, shells can be collected in order to be sold and plants can be sheared to acquire lettuce. These resources can then be used to further improve your island. You can use the food to make exotic new dishes, or the sticks can be used to craft new furniture. You could theoretically spend hours just doing this, even if I don't think it would be too enjoyable to do so for an extended period. 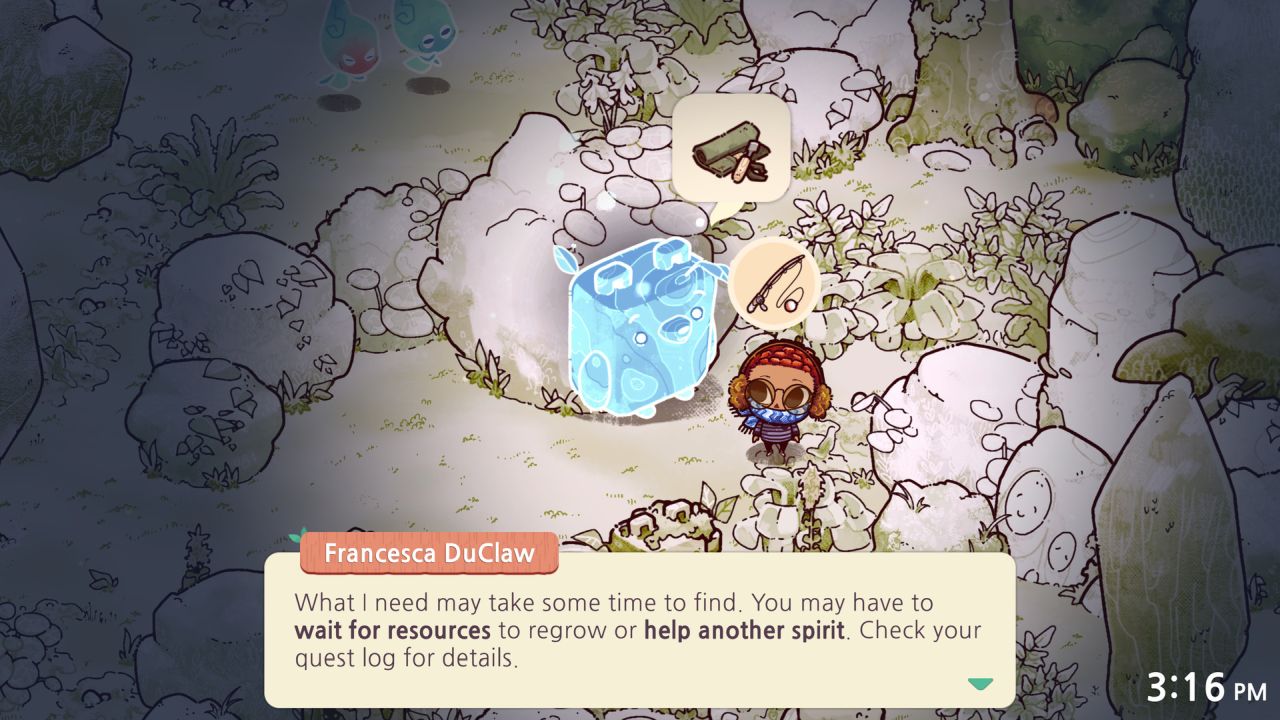 Knowing what to craft and where to place these items is an important piece of the world. Each crafted item, whether it be a fence post or couch, has a few different descriptors. An object could be described as rustic or cozy, for example. Ideally, you would want to place similarly described items next to one another. Once you have that set-up, you can then purchase certain animals that react to these items. If you have a bird that loves scary items, placing it near a group of them will lead to better rewards. It's a neat little detail about the title, and one that requires a little bit of thinking to properly work out. However, it can take a bit to fully enjoy this aspect of the game, as some of the necessary items only become available by getting deep into the narrative.

A lot of the appeal of Cozy Grove to me also comes from the absolutely charming visuals. The world has a bit of a story-book look to it, especially when new objects begin popping up. It almost looks a bit like a pop-up book. The effect of the island lighting up when you complete daily tasks is a fun touch as well. The character models are well-designed. I love the bears, and their looks alone give them a ton of personality. The player character looks a little too much like an Animal Crossing villager, but that's not necessarily the worst title to crib from. The one issue I have with the game being bathed in black and white at times is that it can be tough to track down certain objects. Having to locate a single bird feather in a colorless sea can be a hassle.

For as small and simple as the title can look, Cozy Grove suffers from some ghastly performance issues. Right off the bat, you'll need to wait a few minutes just for your island to load up. For a game that is built around only putting in a small amount of time per day, this seems counter-productive. Things do not get better once you are in-game either. There is frequent lag when you start a conversation with someone else, and there is almost always some slow-down when moving around. The action really slows down once you begin getting color back into the world. This is a serious problem, and one that has a large impact on my enjoyment of the game. Hopefully, these issues can be fixed, but for now, I'm disappointed about the state the game is in. 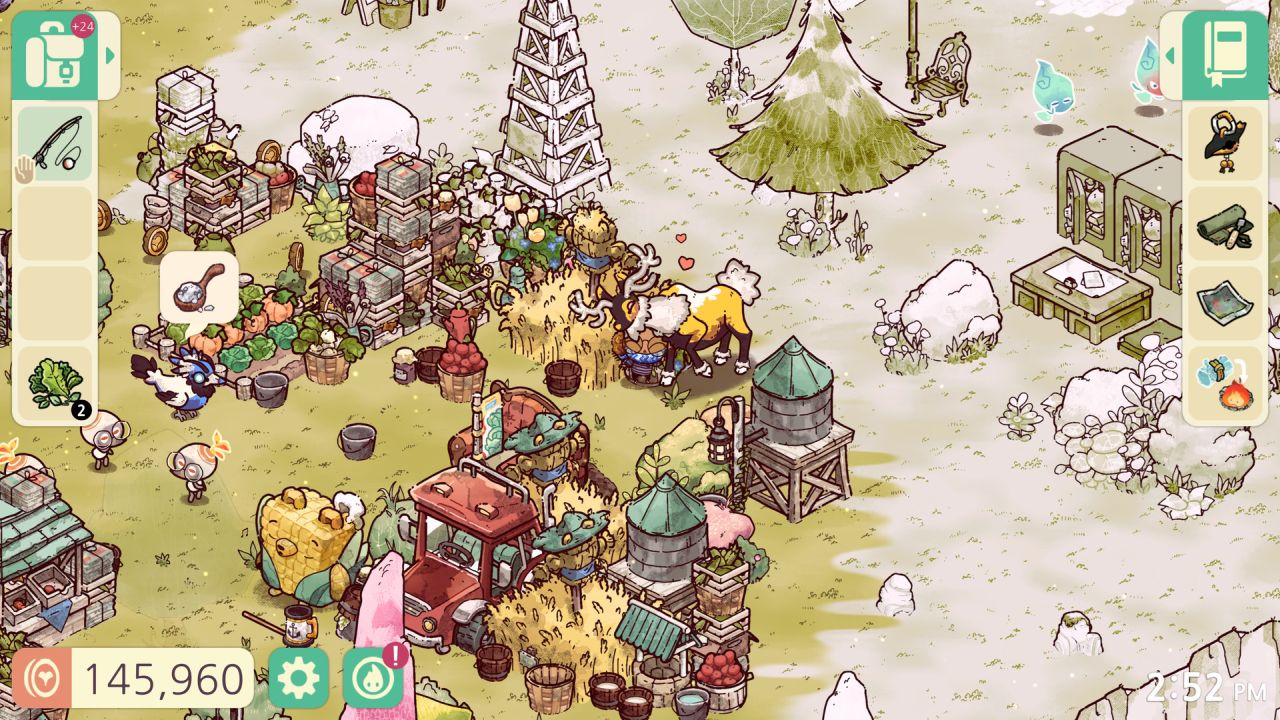 It's far from perfect, but I can't deny that Cozy Grove has its hooks in me. The daily loop the title provides fits perfectly in my day-to-day schedule, and I'm enjoying my time uncovering the secrets of the island. As I continue to spend time with it, I'm excited to continue creating my second home. However, the performance issues are a major concern until they are fixed. I also hope that as days and weeks go by, the daily quests get a little less derivative. There's an abundance of promise here, and hopefully Spry Fox can continue to improve upon the product.

Our ratings for Cozy Grove on PlayStation 4 out of 100 (Ratings FAQ)
Presentation
78
Charming would be the best description to use for the visuals for Cozy Grove. From the lovable character designs to the children's book world, the art of the game is a treat. The lack of color you have to deal with can lead to some issues when it comes to finding items, however.
Gameplay
60
The relaxation genre the title belongs to does not necessarily lend itself to strong gameplay. Most of your time with the title will be spent picking up objects, or completing menial tasks around the island. It can be addicting, but it does lack substance.
Single Player
70
It has to be noted that I'm basing this off of only what I have uncovered so far. With the narrative being locked behind a real-time clock, I haven't advanced it fully. What I have seen, though, is promising.
Multiplayer
NR
None
Performance
40
There's nary a moment in Cozy Grove where you won't be dealing with some kind of performance issue. Nothing here breaks the game, and I haven't had to deal with crashes. But the constant lag and long load times are major annoyances.
Overall
69
Cozy Grove accomplishes what it sets out to do. That is, to provide a charming respite from the troubles of the world. The addicting loop of the island will keep me coming back, even if I don't necessarily love all aspects of the title. 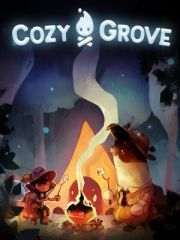 1256. The Inheritance of Crimson Manor
PC