The Sims 3 improves on the franchise in fresh and interesting new ways, but intentional lack of content and some underdeveloped ideas keep it from reaching the heights of the original

The game runs on the Sims 2 engine for the most part, and it runs well enough. However, the engine is showing its age when you zoom out to see the town or select a destination to attend. Regardless of the specs, I experienced frame issues on both my test machines, one being medium and one high-end. So it’s not me that’s causing the issues, it’s the engine. And it’s been a number of years since the previous game, so it’s not exactly surprising. Other than that though, if you were able to run Sims 2, you should have no problems with the latest instalment of the franchise. The sound design is still outstanding, with background music being as catchy as ever, and SimLanguage giving you a good laugh now and then. Character animations are fluent, but disappointingly unchanged from Sims 2. There has been some issues reported with corrupt game saves, or struggling to get Sims 3 started because the Download Manager is being finicky, however I have thankfully not experienced these issues during my time with the game. 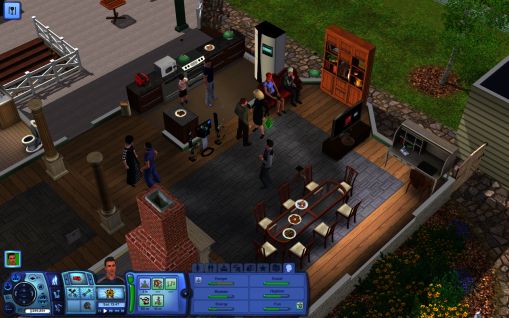 Having alot of friends over causes some hilarious pathfinding issues

The Sims franchise is a really amazing piece of work, that’s being well rewarded for it’s accomplishments by loyal fans. At some point though, you would expect that the blind followers of the series will realize they are part of a big money making machine now, and perhaps take caution before purchasing that new hairstyle or clothing item for their game. Sims 3 is a huge step in the series, but not quite the leap that Sims 2 was. A lot of the features in the game are well-conceived but disappointingly executed. I would be all but ready to give Sims 3 an excellent score, because the new character customization and breathtaking customization levels are well worth the price of admission. However, a clear business plan aimed at driving consumers into spending more money simply cannot be ignored. For the new features that you get, yes Sims 3 is worth a purchase even if you own both previous games. Just be prepared to spend a lot more in the coming weeks if you cannot resist the temptation. And according to sales data, many of us can’t. Sims 3 is a good game, but it’s overshadowed by it’s cash-grabbing strategy from legal and loyal customers.
Prev1234
Our ratings for Sims 3 on PC out of 100 (Ratings FAQ)
Presentation
80
Presentation remains unchanged from the Sims 2. There are more animations and various new gestures, it's solid but nothing revolutionary.
Gameplay
86
Some great new gameplay ideas with the Life goals system. Ability to leave your home and travel around town is a great start, but there is very little to do.
Single Player
75
This is still an open-ended game with no "end". You are free to play as long as you wish and accomplish any goals. The lack of out-of-the-box content is appalling, Sims 3 has the fewest game items out of all the series. Rest must be purchased.
Multiplayer
NR
None in-hame. There are new community features that allow users to share custom creations and movies. Online store provides convenient way to get any items you wish for your game.
Performance
(Show PC Specs)
CPU: Intel Core i7 CPU 930 @ 2.80GHz
GPU: Sapphire Radeon HD 5870 Vapor-X 1GB
RAM: 6GB DDR3
OS: Windows 7 Professional 64-bit

74
Solid loading times and frame rate. Some have experienced issues with screen tearing during cross-town travel. A few crashes and lost game save files.
Overall
85
If you are a fan, you probably already own it. If you've never played the franchise, then you must give this game a try. It's the latest and best in series. Just be prepared to fork out even more money than ever before for DLC. 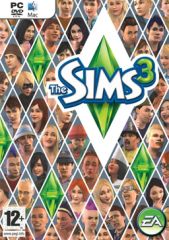 Our Review of Sims 3
85%
Great
The Verdict:
"The Sims 3 improves on the franchise in fresh and interesting new ways, but intentional lack of content and some underdeveloped ideas keep it from reaching the heights of the original"
Game Ranking
Sims 3 is ranked #185 out of 1625 total reviewed games. It is ranked #11 out of 69 games reviewed in 2009.
184. Desperados: Wanted Dead or Alive
PC
185. Sims 3

All videos for Sims 3 (1)
Advertisement ▼