E3 2010: Harmonix offers gamers a chance to try their hand at learning a real instrument

Rock Band 3 is a rhythm video game, and the third game in the Rock Band series. As with previous games, Rock Band 3 allows players to simulate the playing of rock music and other genres using special instrument controllers consisting of lead and bass guitar, drums, and vocals. New for Rockband 3 is the addition of the keyboard, which allowed the developers Harmonix to include a whole new set of tunes and challenges for those who want to use the new instrument as in real songs. During the E3 proceedings, we had a chance to check out a stage demo of the game.
The stage demo consisted of seven players, which included three vocalists, two guitars, drums and the keyboard. Granted, this caused the yet-unfinished game to lag a bit during gameplay, but that’s to be expected. As the song went on, it was easy to identify that the game mechanics remain largely unchanged, which is sure to please long time series fans. All the visuals and prompts remain easily identifiable and in tune with the music track. After the conclusion of the demo song, the developers chatted with the audience a bit in regards to the title.
The game will ship with 83 tracks, the largest number yet for a Rock Band title. But at the same time, the game also supports all the previously released tunes on the Rock Band Network, brining the total to almost 2000 songs that are available to download and play right now. The game will have the usual full campaign mode, along with quick play and online. Points can be earned in all of the modes of play, which add to a grand total amount for the game. Various menu improvements have also been made, for example dropping in and out of a game is now easier than ever. Without having to navigate through any menus, players can join or leave games before or during the performance. Each player can select their difficulty level at any time in the song, allowing for further freedom. 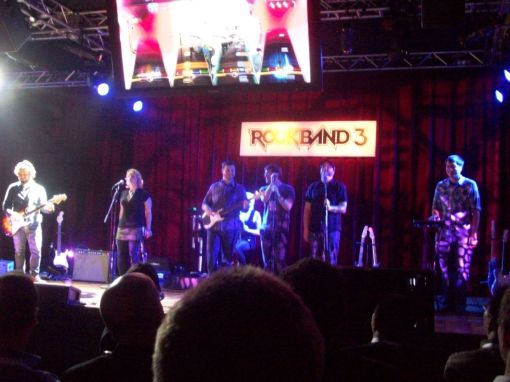 While the above changes are indeed incremental, none are as revolutionary as the new Pro mode. The Pro mode provides players with the real instrument playing experience, while still using the game’s controllers. When in this mode, the game’s gameplay track expands to include the full octet of musical notes, and the prompts change to show real notes. A new set of advanced peripherals will also be available at game’s launch, such as Pro guitars which include the full 6 strings that the player has to press down as if on a real instrument. Pro Drums, base and keyboard modes will also reflect realistic changes to the game, though no special peripherals have been announced. A cool feature of the guitar is that it can be connected to a subwoofer while playing Rock Band, which means you can actually hear the real music produced by the guitar as you play.
Rock Band 3 promises to revolutionize the music gaming genre, and it has certainly taken big steps to achieve that goal. With all instruments now being MIDI compatible, and offering the new Pro mode, Harmonix have certainly made their statement. For those who found the previous games too easy, Pro on Expert will be a whole new challenge. At the same time, the game still offers great tutorials on easier difficulty levels for those who want to start off with no experience. Now, it can finally be said that if you want to play a real instrument, you can truly get started with Rock Band 3. The game is set to release in 2010 on PS3 and Xbox 360.