A solid, but easily skippable entry in the annual sports series

It was less than a month ago that the Tampa Bay Lightning lifted the 2019/2020 Stanley Cup trophy - and considering we're in October, there's little about 2020 that has felt normal. However, EA Sports wanted to give fans some sense of normalcy by releasing their annual NHL game within the typical timeframe. With NHL 21, the franchise is likely in its final edition on the current generation of consoles, but it hardly feels like a glorious sendoff. There are some tweaks here and there, and the Be a Pro mode has been revamped, but much of the experience feels very familiar to last year, including the moment to moment gameplay. After such promising strides in NHL 20, it's disappointing to see the series return to simply coasting along. 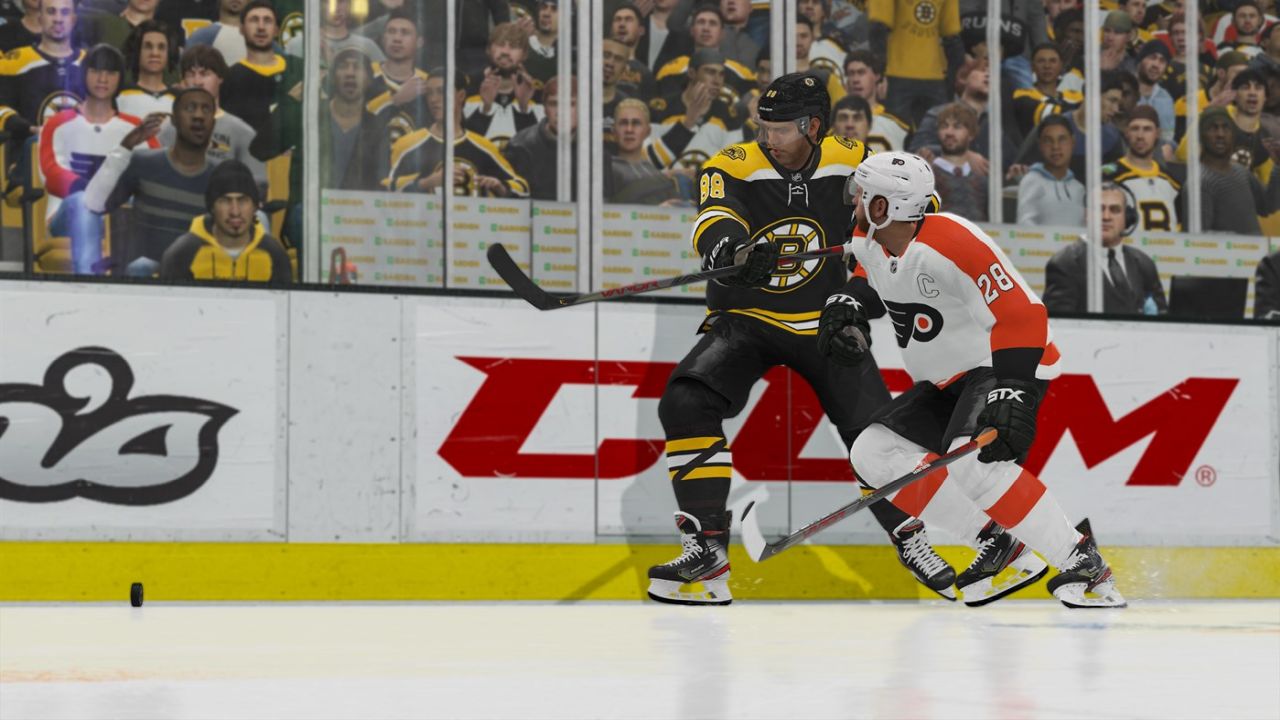 A revamped Be a Pro mode is the headlining feature this year. It's been neglected for years, offering a simplistic player-locked career, while other sports franchises introduced story modes and more expansive experiences. But with NHL 21, you now get to live through the experience of a highly rated rookie coming into the NHL. You create a player using the same expansive system as your World of CHEL character, and can choose to start right in the big league, or play in Europe or through the Memorial Cup first and get drafted. Your coach will set some expectations, and you'll be fighting to remain on the roster through the pre-season and into the regular season by putting in good performances.

Mechanically, that's pretty similar to past experiences, but you now get a variety of cutscenes and new menus that add more immersion and flair to the process. Your player is at the center of the mode, and you'll have a few different types of scripted conversations with others where you can make choices. For example, your teammates will often ask you go to out, or the coach might give you a chance by placing you on the top penalty kill line. You'll often have a choice of responses, such as neutral, team-focused, and superstar-focused. The former are likely to increase how much your team and management like you, while the latter makes you a selfish jerk but one that the sponsors love and pay more.

The conversation system is rather basic and predicable, and you always know what effect an answer will have. The amount of times the team asks you to go to the local museum is downright silly - the dialogue with your teammates is very limited. The likability ratings are very easy to gain – you'll be loved by your team and management, as long as you don't answer every question like an egomaniac. And this love is unconditional – for the sake of an experiment, we simulated the entire year, gathering a measly 20 points and failing all objectives. In the real world, this would get you sent back to the minors, but in NHL 21 the player was promoted to Captain in his second season.

This objective system could really use some balancing as well. Throughout the year, and even during some games, you will get objectives from the coach, teammates, or even press. These typically include scoring a certain amount, putting in a well-rated performance, or just keeping up the pressure. These objectives get repetitive fast, just like most of your interactions in the mode. But further to that, the targets are often geared towards forwards or are just not feasible – like the coach asking you to get five points in the next game. Except you're a rookie defender on the 3rd line getting barely any minutes on the ice. 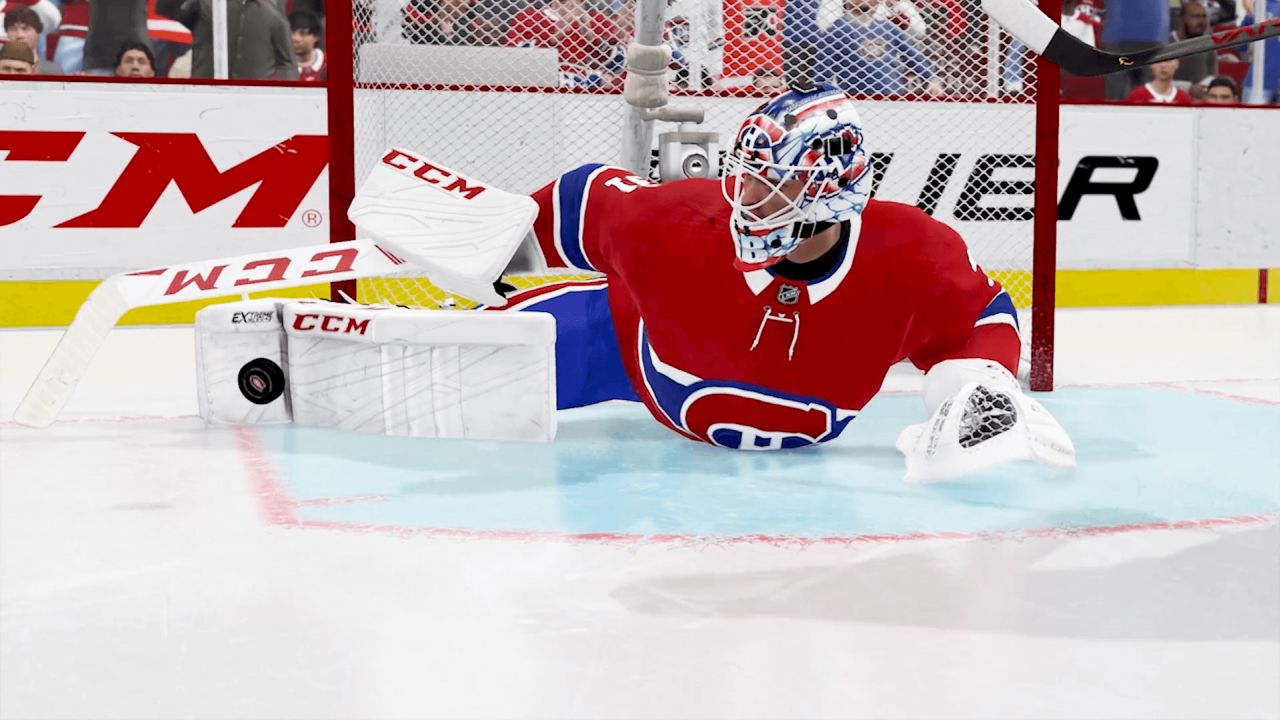 The growth of your player is at least a satisfying mechanic. You'll earn points over the course of the season that can be spent in some new skill trees that are exclusive to the mode. You can develop each aspect of the player – from passing and shooting to strength and balance – by assigning points. You also have a meter that shows what lines you're playing on and when you can expect to get promoted. The money you earn from Brands can go towards helping your skills as you can purchase a variety of items, from cars to gyms and eventually mansions. Each purchase offers either a permanent or temporary boost to your stats (via some arbitrary logic that decides getting an SUV boosts your passing and speed). But having high cash flow from your Brand rating and buying these skill boosts doesn't seem like a worthy payoff when your teammates and management hate you.

There is no voiced dialog in Be a Pro, as you instead read various text bubbles. While the cutscenes keep a decently realistic attitude, the text dialogue that goes alongside them is filled with some very awkward writing, trying very hard to sound hip and casual. There are just a couple of different low-detail rooms where all your off-ice interactions take place, and they are the same regardless of the team you play for. It certainly doesn't look like a big budget production; the only saving grace is the audio design. Through your first year, there is a ton of good contextual dialogue from the play-by-play commentator James Cybulski who follows your progress. It even feels like you're listening to clips from a podcast – sadly though, all of this stops after the first year. So, while the newly revamped Be a Pro mode is certainly a big step forward, it's hardly revolutionary, and doesn’t really match up to similar modes in other sports games.

Elsewhere, there is much less to talk about. The Manager career mode saw very few tweaks, with the main one being a revamped Trade Deadline. You now get a full sub-menu to get you through this turbulent day in the hockey calendar, with things like dynamic player values, ongoing trades, and a live clock that puts the pressure on. It's a nice addition, but it hardly propels the mode. Other additions include a new option to control draft class quality, and some skaters having multiple playing positions. It's a very similar experience to last year, and that's the running theme for much of NHL 21 experience, outside of Be a Pro.

As you head online, you'll find the World of CHEL still letting you enjoy deep and whacky character customization, along with the over-the-top arcade modes of Ones and Threes at outdoor rinks. EA Sports Hockey League is still the bulk of the experience, letting you play 3v3 or 6v6 season matches and eventual playoffs. The playoffs have been redone slightly, as they take place in the last few weeks of a CHEL Season and are called Club Finals. Players earn their skill ratings over the course of the season and can place on the leaderboards. There's a new player rank system that displays your grade for all to see in-game. Practice options are finally available, for those wishing to play on their own.

In Hockey Ultimate Team, the developers followed some of the same streamlining mantra that FIFA did. It remains an enjoyable mode with its own unique approach to the player-collectathon, and now contract and injury cards have been removed, removing the busywork. Being able to see what card packs have player rating guarantees, and being able to exchange players for better ones at decent return – and getting free packs daily – continue to be nice features.

New to HUT is HUT Rush, yet another arcade focused mode for 3v3 or 5v5 gameplay for both against AI and other players. Like HUT Squad Battles, you earn points by playing simple games that can include mascots, and at the end of the event, lasting a few days/week, you get rewards based on how many games and objectives you've completed. The games play like Threes, with a focus on casual play, and you earn extra points for in-game actions and scoring from fancy moves. It's a rather simple and redundant mode when you have so much else to do in HUT, like the regular competitive play or the Squad Battles.

Sports games go through years where they don't offer anything groundbreaking, and that's what sometimes earns the genre its poor reputation in the gaming community. But even in those cases, fans will know and feel that changes have been made to the gameplay. Disappointingly, that's not the case with NHL 21. This year's title plays way, way too similarly to last year's iteration. In fact, besides a couple of new skill moves, you could make a non-ironic argument that’s it’s the same on-ice experience. The action just feels the same – from the skating, to the shooting, the passing, and the collisions. AI continues to get clustered up in the neutral zone and make random poor choices, the goalie animations are extremely familiar, and scoring always seems to happen the same way. It's the least improved yearly iteration from this console generation, in the NHL franchise and probably across all sports games. It's still running on a decently solid foundation, of course, but there's drastically lower value here for returning fans.

Like the gameplay, NHL 21 looks and sounds very familiar as well. Aside from the new Be a Pro dialogue, the rest of the experience is pretty much untouched. Menus are the same, including their poorly animated and laggy performances, some still just featuring lifeless grey smoke. It takes a while to get anywhere, and you'll be met with the same on-ice product, same commentary and visual effects, and a serious case of déjà vu. 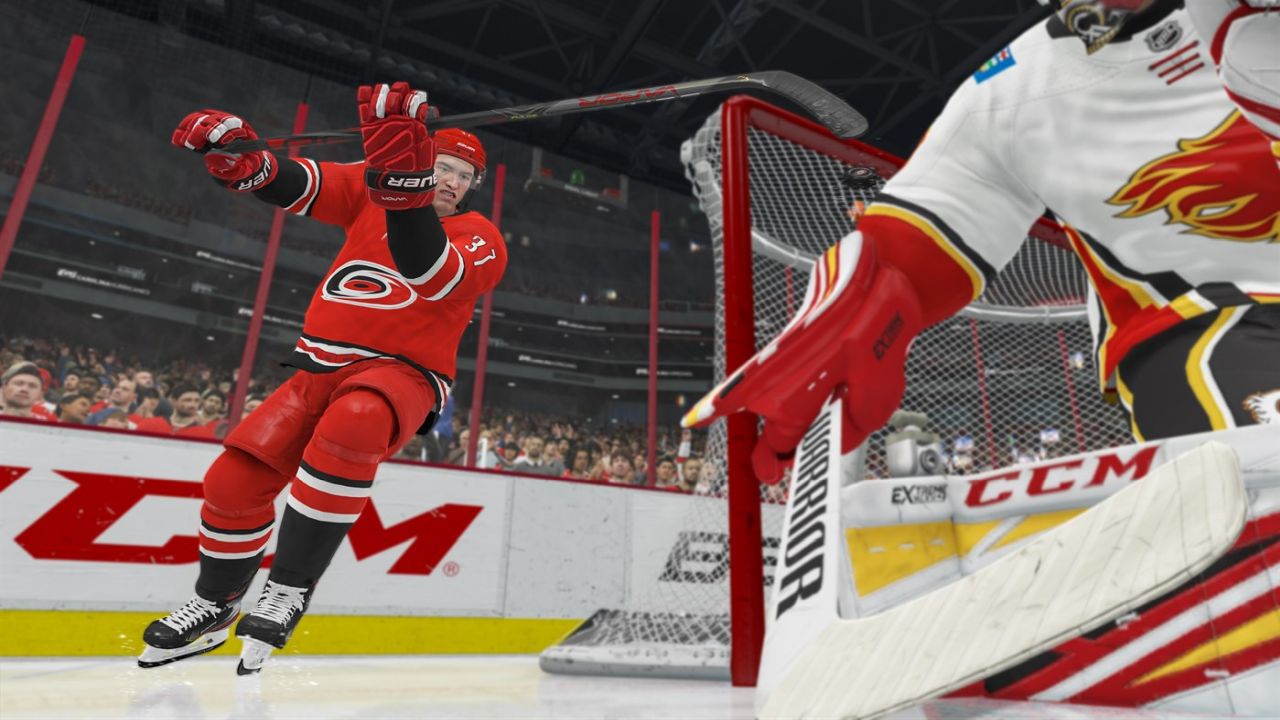 You don't want your last entry on a console generation to be skippable, but that's where NHL 21 finds itself. After a highly successful series of games in the Xbox 360/PS3 era, the NHL franchise chose to head into a new direction and never really reached the same levels of greatness. Looking back, we never even got all the features that existed in the last-gen, including simple things like the All Star Game or the Winter Classic – even though we have outdoor rinks already. It's not a bad game – there are enough iterative improvements here from the past six years to create a worthwhile hockey experience for any new fan. But for those returning from NHL 20, it's something that can be skipped as we hope for something new and better next year.

Our ratings for NHL 21 on PlayStation 4 out of 100 (Ratings FAQ)
Presentation
68
Lots of new commentary in Be a Pro mode, but otherwise the same experience as last year. New scenes and locations for Be a Pro are poorly detailed.
Gameplay
70
Extremely similar to last year, making it impossible to recommend to returning fans. It's still a fine game of sim hockey, but it hasn't really found its stride this console generation.
Single Player
72
The revamped Be a Pro mode finally gives players something new to do, even if most of it lasts just for a year, and it's rife with repetition and poor design logic. Manager mode adds new trade deadline experience, and not much else.
Multiplayer
75
Although little has changed and the new HUT Rush is a mostly throwaway arcade mode, multiplayer remains a big draw for players that want longevity.
Performance
60
The scattering of bugs and slow menus continue to be a problem for the franchise.
Overall
70
As the final entry on the current console generation, NHL 21 underwhelms. It plays a decent game of hockey, but with very few changes on the ice, and the new Be a Pro leaving something to be desired, it doesn't offer much to be excited about for returning fans. 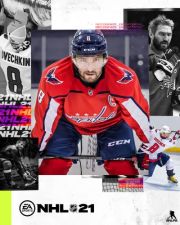