Far from the King of the Ring

To put it bluntly, last year's WWE 2K20 was absolutely awful. A buggy, broken mess of a title that represented the nadir of the long-running franchise. I certainly wasn't alone in thinking that, and it appears that the tidal wave of criticism prompted a change for 2020. Rather than drag out the same battered title for a new year, 2K Games decided to switch things up with WWE 2K Battlegrounds. The publisher has had some success going in a less realistic direction in the past, so it certainly wasn't the worst of ideas. 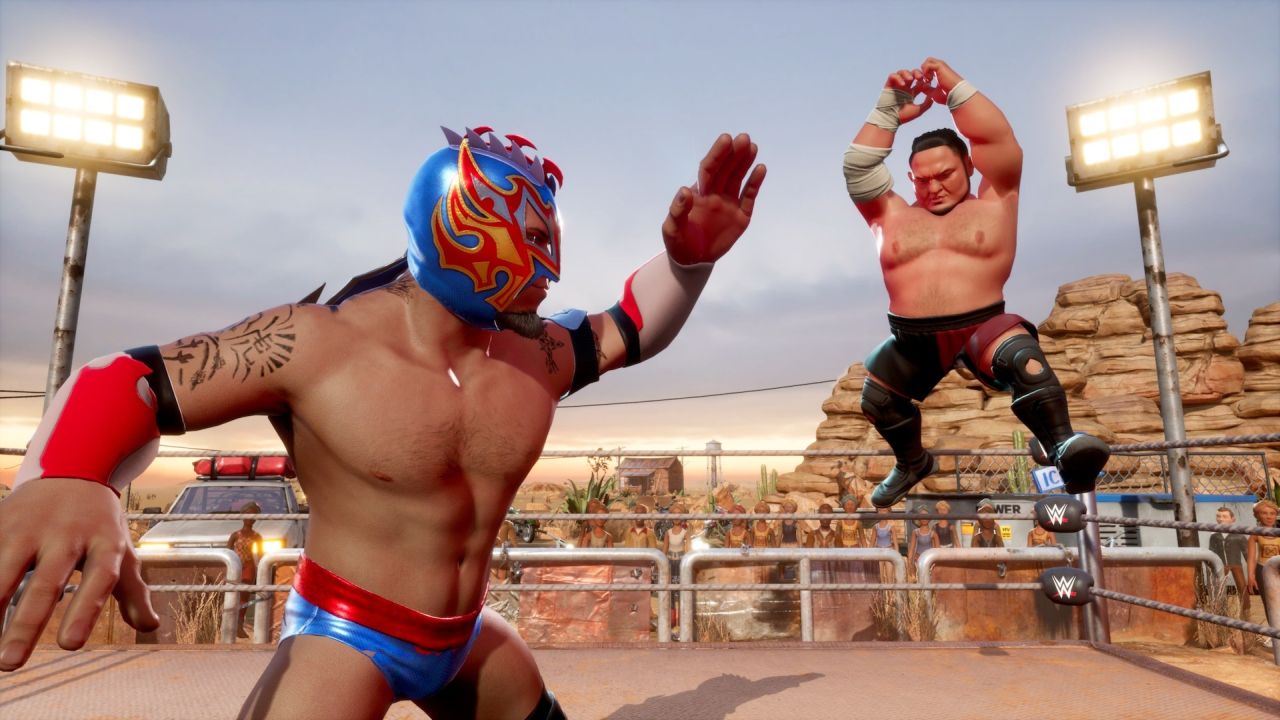 WWE 2K Battlegrounds takes the already cartoon-like wrestling promotion and ups the insanity by 100%. The world-class physiques have been upgraded with extra muscles, the arenas are packed with dangerous hazards and the maneuvers are taken into another stratosphere. I mean that literally, of course. Honestly, I'm more than okay with the fact that the craziness has been raised several notches. The WWE is already a cartoon, so why not embrace it if the opportunity arises? It helps that this more arcade-styled action opens the door up for a larger audience. That's something the traditional WWE 2K series has struggled to do in recent years.

In place of the traditional batch of moves to utilize, the title sports a streamlined wrestling engine. Punching and kicking form the cornerstone of your arsenal, with combos being possible through either strike. Grappling is boiled down into either an actual wrestling move (suplex, backdrop, etc.) or hoisting them up for a throw. Defense is handled through a block button and reversal prompts which linger on-screen for way too long. Finally, instead of convoluted mini-games, pins and submissions are handled through button mashing. It is a simplistic engine, and the in-game tutorial will get you prepared for the ring accordingly.

The combat engine of WWE 2K Battlegrounds is a mixed bag. The striking and grappling are easy enough to get adjusted to. Punch and kick combinations are super simple to pull off, and signature slam directions are found right on the pause screen. I do have two gripes with the in-ring action, however. The first is that having any more than two grapplers in the ring at the same time can be a little too chaotic. The ring doesn't seem large enough to accommodate the action, and it often feels like everyone is constantly up in each other's business. The other is that the reversal system is too easy to abuse. The window you have for pulling them off is simply too large, which tends to lead to back and forth battles of reversal chains. I think the system in place is fine enough, but it just needed to be made a little less easy to complete. 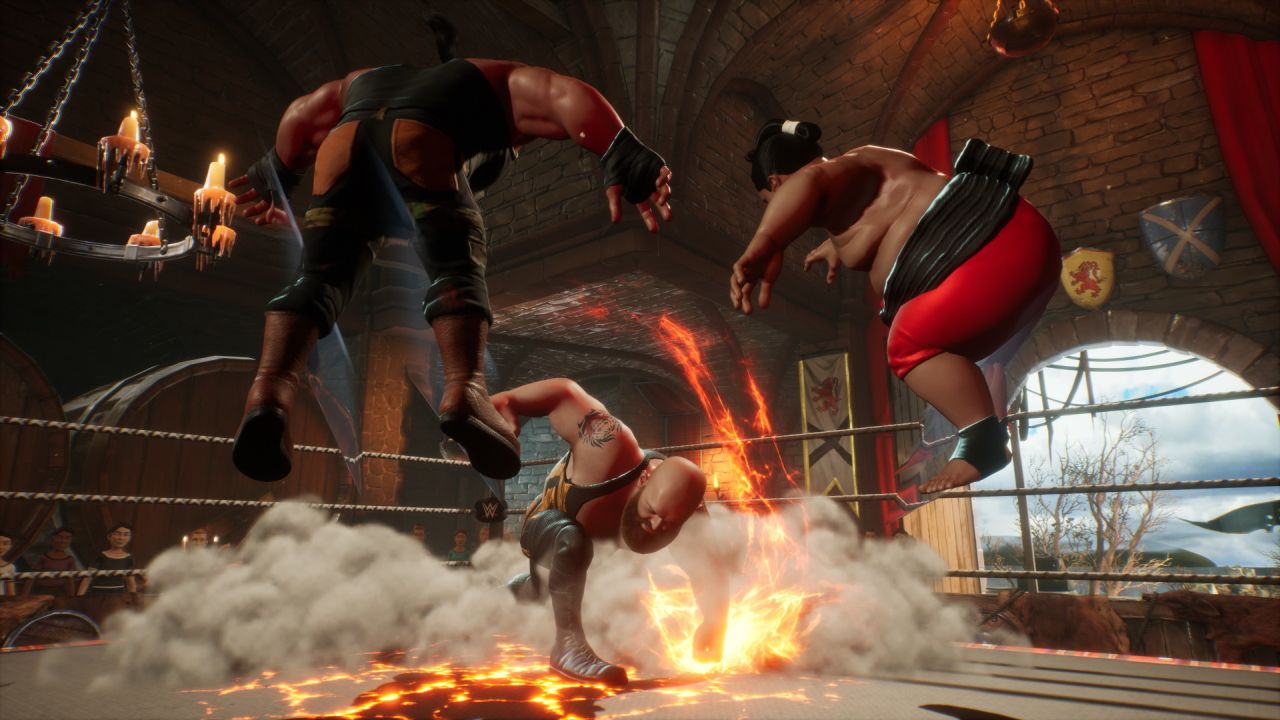 Rather than give every superstar their own unique move set, the wrestlers of Battlegrounds are broken down into specific categories. These include the size of the wrestler or the style they are known for. For example, Rey Mysterio and Ricochet are High-Flyers, while Brock Lesnar and Yokozuna are Powerhouses. For better or worse, this significantly levels the learning curve of the title. On the one hand, it does let the more casual gamer easily get adjusted to the action. For a title so focused on multiplayer action, this is important. However, it also means that the superstars don't play that much different from one another if they are in the same class.

It's tough to say whether the trade-off of depth for approachability was the right decision. The fact that the same limited move sets are almost 100% identical for each wrestler in the same class is lame. Ember Moon and Charlotte Flair both reside in the All-Rounder class, but no one would ever say they have similar styles. They have their unique signature moves, but otherwise it's the same move set. In this regard, it feels extremely low effort. At least the classes themselves feel different enough from one another. High-Flyers can execute maneuvers such as springboard dropkicks and suicide dives, while Brawlers can pull foreign objects seemingly out of their own pockets. Ultimately, it may not make a difference what wrestler you pick but rather which class. That's the level of depth you can expect from the title.

The same lack of depth can be found in the modes the game features. When you first boot it up, you'll probably gravitate to the campaign mode. The premise is that Paul Heyman has devised a brand-new form of pro wrestling inside of the traditional WWE structure. The titular Battlegrounds brand takes a new group of superstars and charges them with defending their home turf location. These unique grapplers are recruited to action by Stone Cold Steve Austin and are put through the wringer of facing the regular WWE superstars. The difference is that instead of an arena, they are fighting in a swamp or garage. 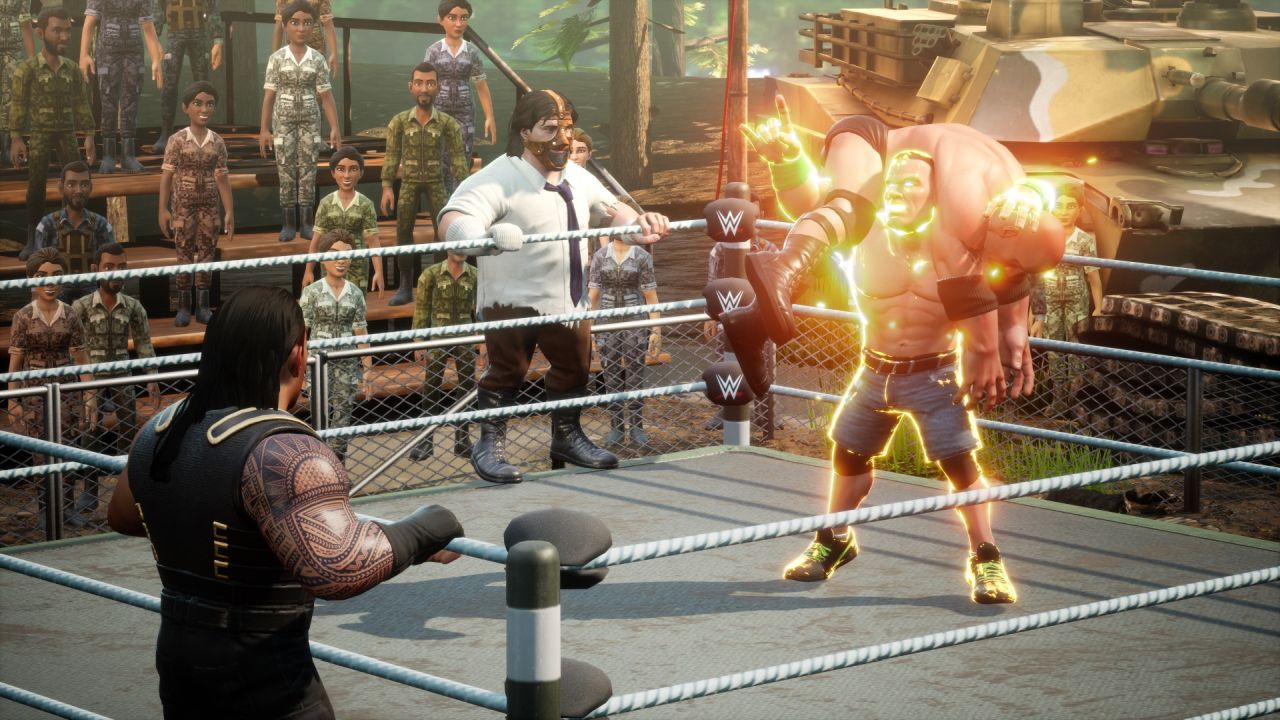 To be honest, I enjoyed the storyline found here. It does not take itself seriously and is quick to make fun of the history of the WWE. The new characters are kind of duds, but Stone Cold is written well enough to make up the difference. The issue is that even with these storyline interstitials, the campaign itself is a drag to play through. It doesn't do enough to switch things up from match to match. It often feels like a glorified gauntlet match than it does a full-fledged story mode. It needed to do more than just throw you from fight to fight.

The other major single-player mode takes the same set-up but ditches the entertaining story bits. Battleground Challenge is designed exclusively to improve any created wrestler you may cook up. You'll fight your way through 100 or so matches, with upgrades being found along the way. In-match power-ups and cosmetic features are littered throughout the mode, so if you want more options for your fighter, this is the place to go. Not only does this serve to force you to grind for extra features, but since you are stuck as just one fighter, it lacks even the middling amount of variety the main campaign had.

Outside of those two, you'll find the regular slate of multiplayer modes in WWE 2K Battlegrounds. Single, Tag, Triple Threat and Fatal Four-Way are the main types, but specialty options such as Gauntlet, Steel Cage and Royal Rumble are also available. One interesting online option is the King of the Battlegrounds challenge. In the mode, you are whisked into a four-person brawl, with the player who gets eliminated being replaced by a player waiting in the lobby. Think of it as a more chaotic take on the King of the Hill featured in the recent Mortal Kombat titles. The key is if the community will stick around with it like the fans of that iconic fighter have.

The biggest strike against the title comes not from the gameplay itself, though, but rather the over abundance of microtransactions. The roster is almost entirely locked behind a paywall, with many of the stars of the WWE (Drew McIntyre, Triple H, Becky Lynch) being locked out of the box. There are two kinds of currency to be found in the game. Blue Battle Bucks can be earned while playing the game, while Golden Bucks are the kind you buy with real money. Everything costs such a high amount of Battle Bucks, though, so that the only way you'll unlock everyone is through a ridiculous amount of grinding. I don't mind alternate costumes or even create a wrestler pieces being unlockable, but the fact that over half the roster is locked from the start is absurd. 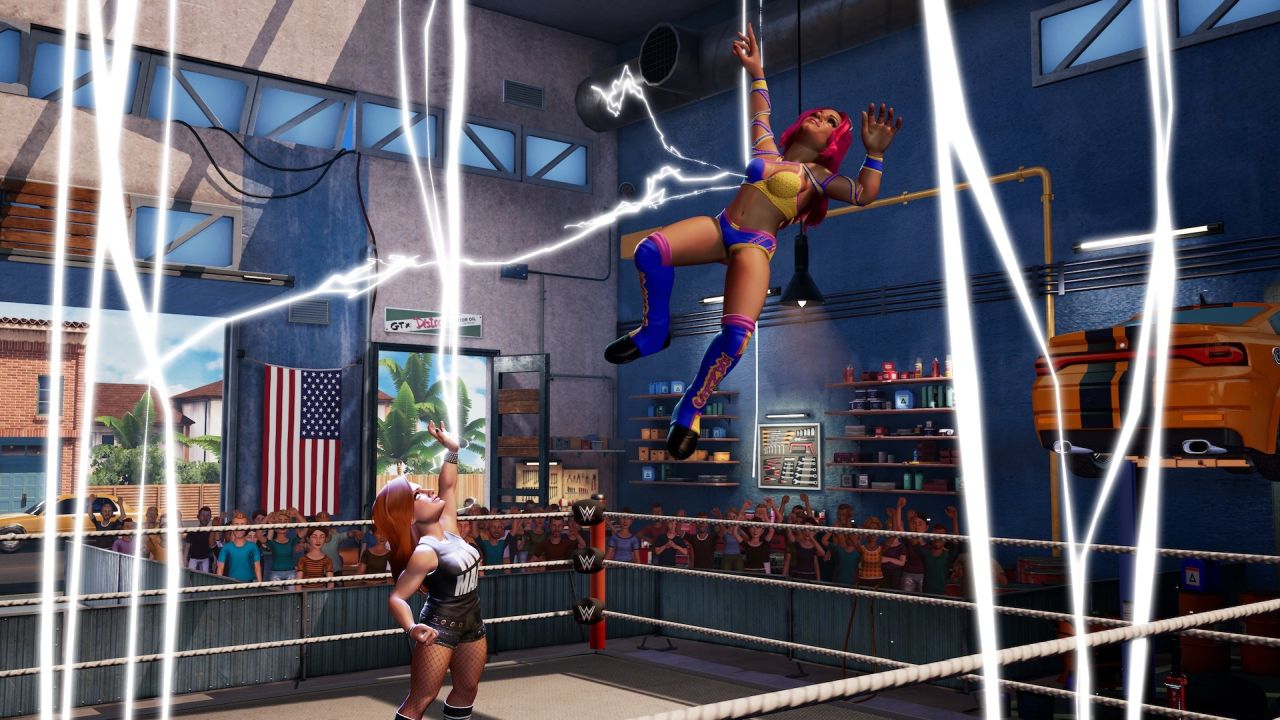 Although nowhere near as bad as last year's release, Battlegrounds does have its fair share of glitches and goofs. The one that always seems broken as of now is the animation that occurs when you complete a reversal. Often the reversing wrestler will be moved completely out of place, which results in the wrestler being reversed taking a slam from the invisible man. This was a frequent occurrence during my time with the title, and it's impossible to ignore. I did also get hit with some bouts of lag, particularly when there were more superstars in the ring than normal. It did pop up during a late campaign match against The Undertaker too, though, so the problem may be more widespread than I thought.

Inspired by 2011's WWE All Stars, the title sports a cartoonish, over the top style befitting of the action. The already massive physiques of each wrestler are even more bloated than usual. Brock Lesnar has muscles upon muscles, and even smaller folk such as Akira Tozawa are looking ripped as heck. What the character models have in style, though, they lack in detail. Unless they have some kind of discerning attribute, like the moustache of Hulk Hogan, the faces aren't that much different from one another. Already style-less dudes like The Miz and Randy Orton look even more bland than usual. I'm also kind of disappointed with the unique arenas. The idea of going to these extraordinary locations to wrestle is cool, but I wish there was more done with each arena.

After last year's disastrous release, almost anything would have been considered an improvement. WWE 2K Battlegrounds is a much more enjoyable experience, and one that is genuinely fun in spots. However, the glaring lack of depth and brutal microtransactions essentially put the brawler down for the count. In the small genre of four person fighters, there are better polished and deeper options out there.

Our ratings for WWE 2K Battlegrounds on PlayStation 4 out of 100 (Ratings FAQ)
Presentation
54
The over the top style of WWE 2K Battlegrounds is a solid fit for the wrestling promotion. However, for as ridiculous as they appear, they do lack finer details. And for as crazy as the title is, the arenas are strangely lacking in the same insanity.
Gameplay
50
As a pick-up and play arcade brawler, the title is more than sufficient in the gameplay department. That casualness comes at the expense of depth, though. The repeating movesets of same class wrestlers means that none of them ever feel that unique from one another.
Single Player
58
The storyline of WWE 2K Battlegrounds is the perfectly weird scenario the title needed to make the campaign work. And thank goodness for that, because the lack of variety in the actual wrestling matches make it tough to stick with at times.
Multiplayer
70
A solid slate of multiplayer options open the door for the title to be a decent party option. The King of the Battlegrounds mode provides a fresh option for the series, even if I question how well it will hold up over time.
Performance
40
Glitches during the reversal process are a frequent occurrence, and slow down tends to pop up when more superstars are in the ring. For a title designed for multiplayer, that's not an ideal scenario.
Overall
50
Although WWE 2K Battlegrounds is a way more pleasant experience then last year's wrestling debacle, the franchise still has a ways to go. The title sets out what it wanted to do, which was a provide a light, arcade-like take on the WWE. However, between the lack of depth and intrusive microtransactions, I'm not sure how much staying power it has. 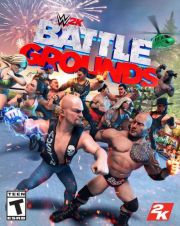