Developed by Metronomik, a Malayasian-based indie games studio, No Straight Roads is a unique looking action-adventure game that tells a tale about a misfit rock duo and their attempt to overthrow an EDM empire. While its premise is novel and the story, soundtrack and characters are great, No Straight Roads stumbles badly under the weight of its own ambition, producing an inconsistent gameplay experience that revels in mediocrity despite hitting the occasional high notes. 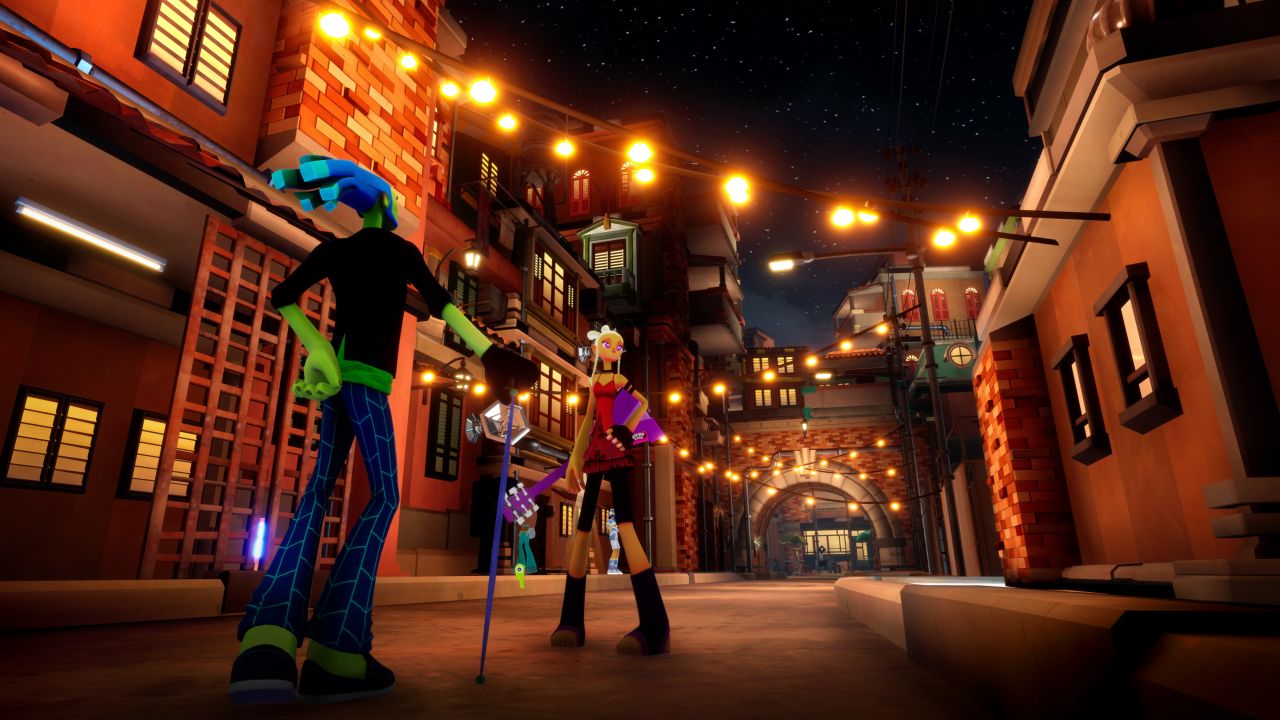 No Straight Roads takes place in Vinyl City, a neon-clad metropolis powered by music. You assume the role of Mayday and Zuke, two aspiring artists who seek to bring the genre of Rock back from the dead, as EDM has since become the most popular sound in the city. Performing together in their band Bunk Bed Junction, the dynamic duo perform in the Lights Up Audition music show in front of No Straight Roads (NSR), the music label in control of Vinyl City. Despite rocking their hearts out and garnering rapturous applause, NSR are only interested in EDM artists to bolster their empire, swiftly denying Bunk Bed Junction an opportunity. Infuriated by the blatant corrupt nature of NSR, Mayday and Zuke set out to dismantle NSR, seeking to bring back rock and freedom of musical expression in the process.

The narrative is enjoyable throughout despite never lighting the word on fire, with great main characters and plenty of humour in its dialogue. The Bunk Bed Junction band members couldn’t be any different as individuals, and yet together they make a solid duo that you just can’t help but cheer for. Mayday as her name so accurately suggests is a handful. She’s a self-assertive guitarist who is unashamedly erratic, not afraid to let her foes know exactly what she thinks. Zuke on the other hand is a quiet and relaxed drummer who is the voice of reason in the group. The NSR artists and other supporting characters such as NSR boss Tatiana and Bunk Bed Junction superfan and manager Kliff offer up decent performances, which makes it all the more upsetting that they don’t get as much screen time as they arguably deserve. The 5-6 hour runtime of No Straight Roads leads to characters quickly coming and going, and while it’s easy to appreciate each of them in their short stint in the spotlight, it would have been awesome to see more of charming characters such as DJ Subatomic Supernova and the robot boy band 1010. The story despite its predictability is silly fun, feeling reminiscent to that of an animated movie, which makes it all the more upsetting that gameplay issues quickly lead to frustration.

No Straight Roads is an action-adventure game that features rhythm-based combat, however keeping to the beat isn’t as crucial as you’d think. Sticking to the beat will lead to more success in battles, but straying from the beaten path (pun intended) can still result in a solid performance, something hardly seen in a genre that tends to punish strongly for going off beat. Enemies attack to the beat of the music and dodging them to the beat feels rewarding, but you can just as easily launch yourself at them before the beat to kill them. The gameplay is more reminiscent of Kingdom Hearts than it is a rhythm game, as you mercilessly hack, slash and button mash your foes. 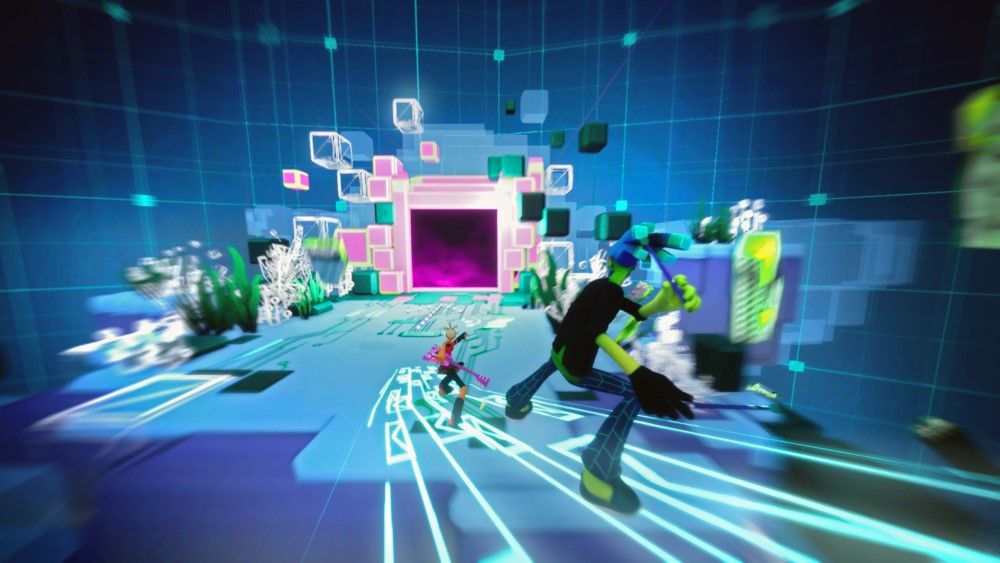 As Mayday and Zuke, you make your way through numerous districts of Vinyl City, defeating top NSR talent in order to acquire their Platinum Disc. Owning the Platinum Disc of an artist grants you control of their district, allowing you to move onwards and take out each artist as you raise Bunk Bed Junction from the depths of the charts to the top. Before being able to fight an artist, you must first fight your way through a level consisting of numerous minor enemies. These levels are more open than the boss fights and rely more on platforming, which quickly results in a mess as the floaty jumping was never truly cut out for the movement the levels demand. They feel janky and frustrating, as you never truly feel comfortable with the nature in which Mayday and Zuke control. Fighting against the minor enemies who stomp the ground or shoot at you to the beat is also really annoying, as it feels particularly bland. Sticking to the beat in these moments quickly becomes the last thing on your mind, as it is far easier to just carelessly take damage while hacking and slashing. Reaching the end of these combat corridors grants you access to the bosses, who thankfully offer up far more enjoyable combat encounters.

You can switch between Mayday and Zuke on the fly, with the two offering up slightly different attacks. Mayday does heavy but slow attacks with her guitar, while Zuke delivers less potent but quicker hits with his drumsticks. Both characters can also collect music notes that can be used to perform ranged attacks, as well as jam out in front of objects in the environment to bring life to turrets and other tools to aid in battle. It would have been nice for the two to play a bit more differently, as they ultimately function the same way.

If you’d prefer a friend to assume the role of your bandmate instead of the AI, you can play the entire game via Couch Co-Op. All versions of the game allow for 2 local players to play No Straight Roads together, while the Nintendo Switch version (which we didn’t review) features an additional 3-Player Co-Op mode that sees the band’s alligator assistant Elliegator help in battle by collecting items and transforming props. The 2-Player Co-Op mode functions fine, feeling not too dissimilar from playing alone. While it is good to play the game alongside a pal, it doesn’t do anything alleviate the shortcomings of combat.

Boss battles in No Straight Roads is where the combat feels the best. It still doesn’t play particularly well, but they allow for you to get into the rhythm of combat far better. The more enclosed environments alleviate the aforementioned platforming frustrations, and it begins to get a lot easier to play according to the rhythm. In these moments when you’re bobbing your head to the soundtrack while slashing away at a boss with Zuke’s drumsticks or Mayday’s guitar, the game starts to feel a little more entertaining. You can unlock further difficulty modes for boss battles, such as a Hard mode, Crazy mode, Parry mode, and Perfect Parry mode. Hard mode and crazy mode allow you to approach combat as you otherwise would, with a harder overall difficulty, while the parry modes require you to attack by parrying enemy moves in accordance to the beat. Perfect Parry mode is completely insane, challenging you to defeat bosses without missing a single parry. The boss fights are predominately a good time, and while the combat is basic, they provide a decent experience. 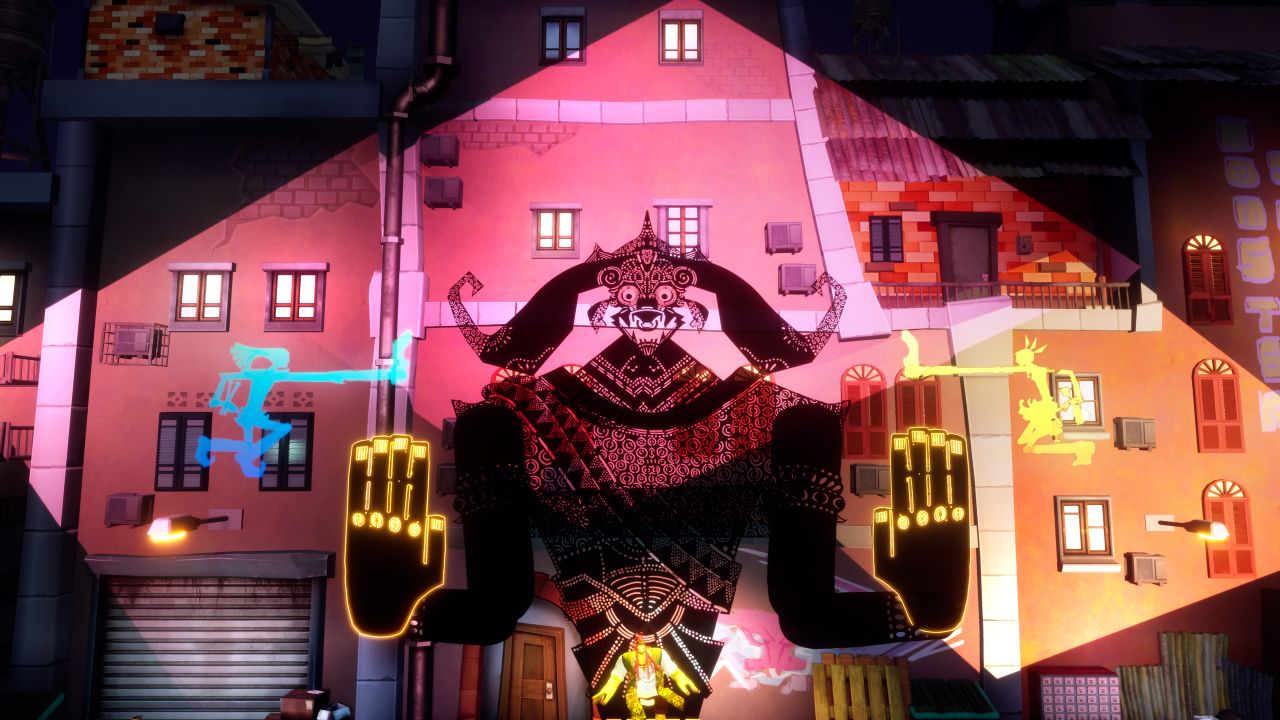 When you aren’t attempting to take out a member of NSR in a battle of the bands, you spend your time exploring. In these segments you can complete simple tasks such as collecting Mini-Qwasa canisters to power up objects and gain more fans, or collect stickers that provide small stat buffs in battles. You can also inspect items of interest in the overworld and have mundane conversations with the locals, but other than that, there isn’t much on offer. Qwasa collection tries its best to replicate the vibes of a collectathon platformer, but the hub world ultimately feels like a waste of time and potential. They look pretty, with the overwhelming neon aesthetic being a joy to the eyes, yet at the same time locales feel dated and look worse the more you investigate. NPCs stand still and are lifeless, with many deemed of such little importance that you can literally clip right through them. Blemishes like these stick out like a sore thumb, especially when you’ve got areas that otherwise look like a great deal of care have gone into them.

The hub world also grants you access to the sewers, an area which serves as Bunk Bed Junction HQ. Here you can upgrade the stats of the band and Mayday and Zuke individually, with fans being the currency used to expand your skill tree. Zuke’s Workshop is another important stop in the sewer, as you can apply the stickers gathered in the overworld whilst also changing the special abilities that the duo have equipped. There’s even an underground radio station that the band can undergo interviews with to boost their popularity in Vinyl City to gain even more fans. The sewer plays its role as a hub to upgrade your stats and take a look at your collectables, and it arguably should have been the only place you visit between levels, with the overworld feeling rather pointless overall.

Charm can only get you so far, and No Straight Roads is a prime example of this. It has a solid soundtrack, likeable protagonists and a charming story, but at the end of the day these elements matter little when the gameplay is average. Boss battles elicit some fun, but the combat sections that lead up to them are so poor that the gameplay experience quickly feels frustrating. If more attention went into combat and open world exploration, No Straight Roads could’ve had some potential.

Our ratings for No Straight Roads on PlayStation 4 out of 100 (Ratings FAQ)
Presentation
65
Visual aesthetic is vibrant and detailed for the most part, but unpolished in other areas such as NPCs. Voice acting is fine. Soundtrack is groovy.
Gameplay
55
Exploration feels pointless and the floaty platforming leads to annoying moments. Boss battles offer good fun despite the basic hack and slash combat.
Single Player
60
Narrative is decent without being amazing, while the protagonists are likeable. Multiple boss battle difficulty challenges offer replayability well exceeding the 5-6 hour playthrough.
Multiplayer
55
2 player co-op allows a friend to play as Mayday or Zuke. Gameplay wise it plays basically the same as single player.
Performance
80
The odd stutter when loading-in areas of a level. Otherwise a non-issue.
Overall
59
No Straight Roads has an interesting premise and a fun story to tell, but unremarkable combat and open world exploration result in an overall mediocre experience. 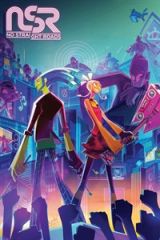