The sports title that puts gameplay above all else

One of my favorite, and wildly underrated, sports games growing up was Backyard Baseball. In Backyard Baseball, you would select a team of kids, boys and girls, and play through a season of matches played in schoolyards, back alleys, and of course backyards. It's a game that speaks to the heart of baseball, the casual way that it weaves its way into the lives of Americans - whether it's a company softball team, a traveling little league team, small-town minor league ball or a pickup game amongst friends. 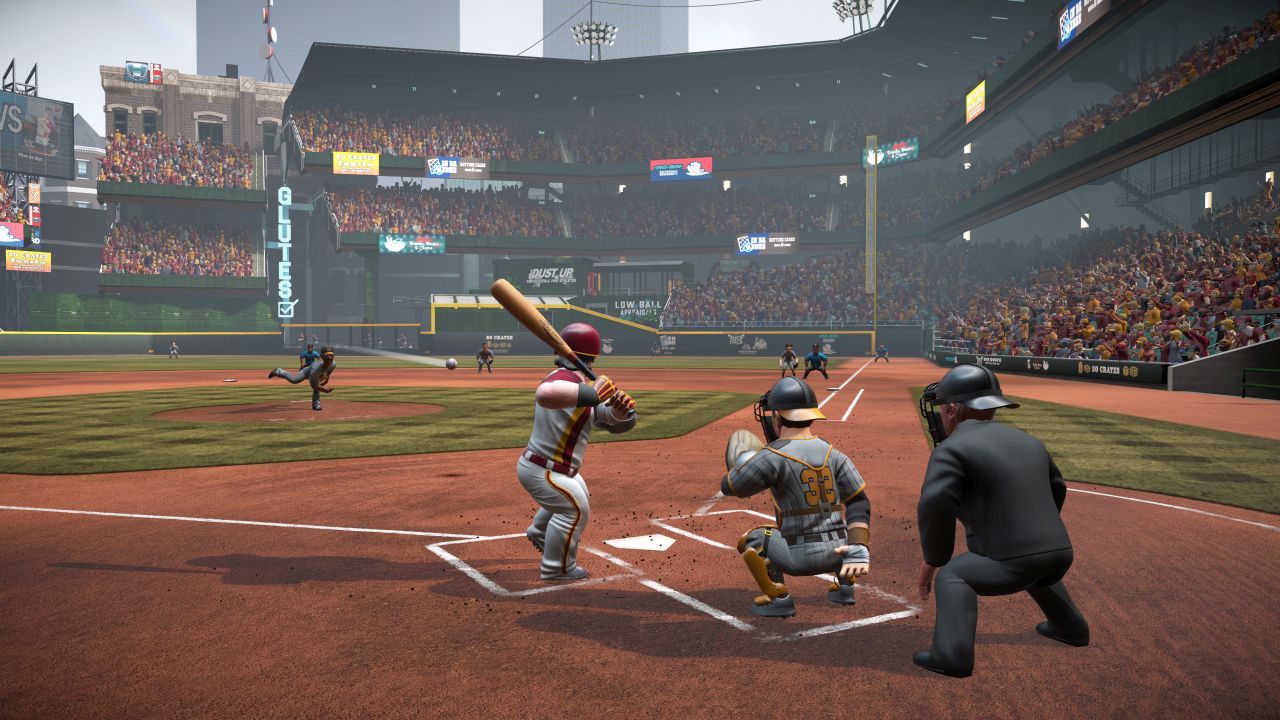 There's some of that same magic in Super Mega Baseball 3. Unshackled from the constraints of an MLB contract, Super Mega Baseball is a game that feels like it's featuring a league I hadn't heard about before - like the Nippon Japanese Baseball League or the Korean Baseball Organization that has ascended to prominence in the wake of a cancelled MLB season. Super Mega Baseball 3 doesn't feel like Major League Baseball, and that can be a relief. Its freedom from having to simulate the real world allows for fun aesthetic and gameplay additions. Yet, this freedom comes at a cost. As Super Mega Baseball evolves sequel to sequel and adds more modes and features, it will have to face challenges that games mimicking the major leagues already have answers to. For instance, what does a franchise mode look like in a fictional baseball league?

Super Mega Baseball has its own league and teams ready to go from the first time you press "Play" but it also offers a customization suite that is as good as, if not better than, its MLB rival. You can name your team anything you want, technically you can create any logo you want and it has a bevy of pre-set logos and options ready so you can quickly create teams. You can also quickly edit players to whatever name, gender, or look you want. Again, a nice thing about Super Mega Baseball is that because it has fewer abilities and sliders there's less time spent tweaking characters bunting ability or hairstyle. I did hit a few bugs while customizing players, like repeated cosmetic options (I saw the same mohawk like four different times while cycling through the hair options).

The game plays quite well. The animations are a little rigid, but for an indie sports game that's to be expected. Hitting is much like any other baseball game, one button is used for a contact swing that has to be timed with the pitch, and another is used to bunt. It's the power swing that is unique as it requires the player to hold the button - charging up the swing - so you have to time when you start your swing and when you release, so that it syncs up when the pitch crosses the plate. Pitching is also a bit different as you choose a pitch location and then have to match the location you choose with a reticle while your pitcher winds up, or you risk throwing a wild one. This style of pitching is more fun than metered pitching or The Show's pulse pitching. With this gameplay Super Mega Baseball is tapping into the importance of timing hitting and spotting your pitches. It works wonders and it's probably the most compulsively fun sports game to actually play. 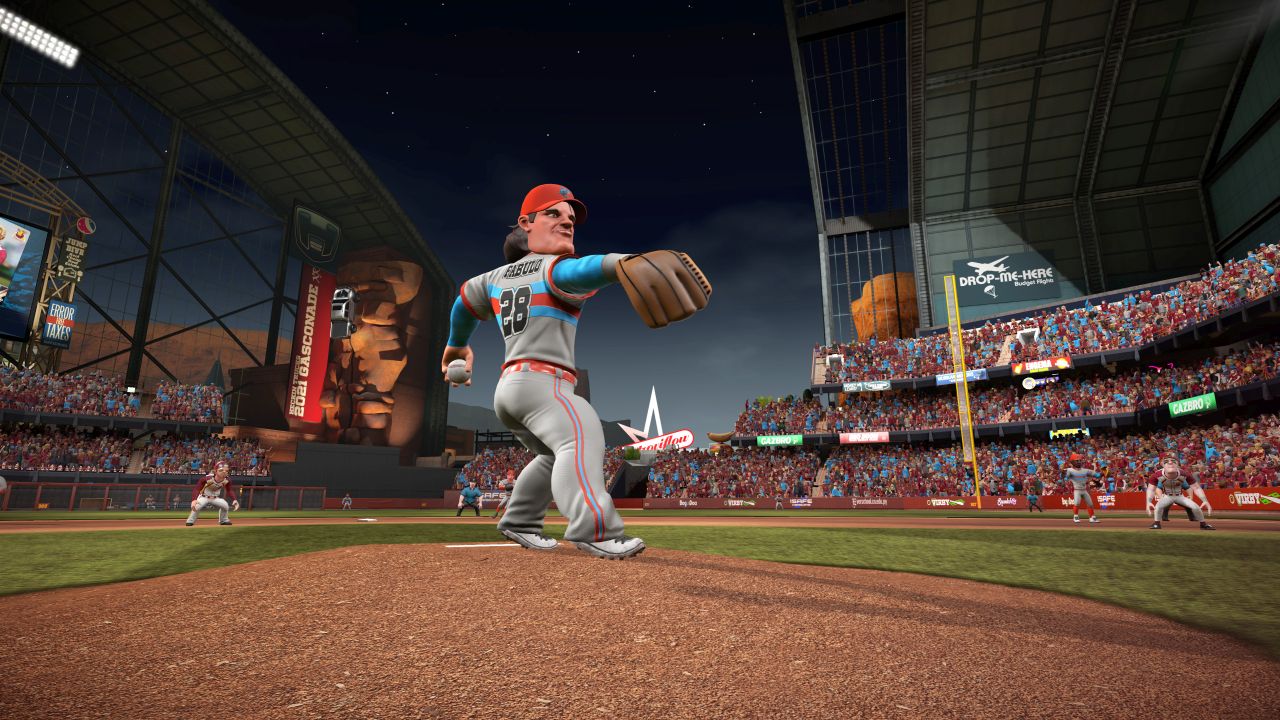 The matches are streamlined so things snap along quickly. The TV-style presentation of most sports games tend to draw out playtime, but Super Mega Baseball eschews that and goes for something that makes you feel more like a participant in the action rather than someone watching at home. You can hear the fiery calls of the officials and the echo of the loudspeaker. There's no commentary to speak of and it's nice. No repeated lines of dialogue, no fake banter - the commentary isn't really something you miss.

The game offers three different modes, Season, Elimination, and Franchise. Season and Elimination are pretty self-explanatory. Season offers you the ability to play through a single season of your created league or the default one, and Elimination is a tournament. Franchise is the newest addition to the game and it's flawed but interesting. As expected, you play as a single team over the course of multiple seasons. However, unlike the MLB you have a salary cap and must sign the best team possible with your limited funds. Every season players will choose to retire or become free agents, allowing teams to sign them - usually for more money than they were making before. If you wait a few rounds of free agency, players may drop their asking price, allowing you to sign them for cheaper, but if you wait too long another team may snag them. The biggest issue with this system is that there isn't a lot of upheaval year to year. Teams start out relatively equal and even as players shuffle teams, they stay equal. It allows for team parity but it lacks some storylines that occur in the real world. Sometimes franchises need to rebuild, sometimes they run out of money, sometimes big markets have advantages. This feels like a half-measure and not fully fleshed out.

If you save money during the free agent season, you can use it to train your squad. These training sessions can help players increase their abilities or earn traits that can help/hinder them. For instance, "Inside Pitch" will give your hitter better power and contact on inside pitches, while "BB Prone" means your pitcher is likely to walk a batter if they already have a three-ball count. These traits are acquired randomly, so a training session may improve your pitcher's velocity, but also gives them a 5% chance to get a trait. So the question is where do you want to spend your money? Free agency or developing your team? 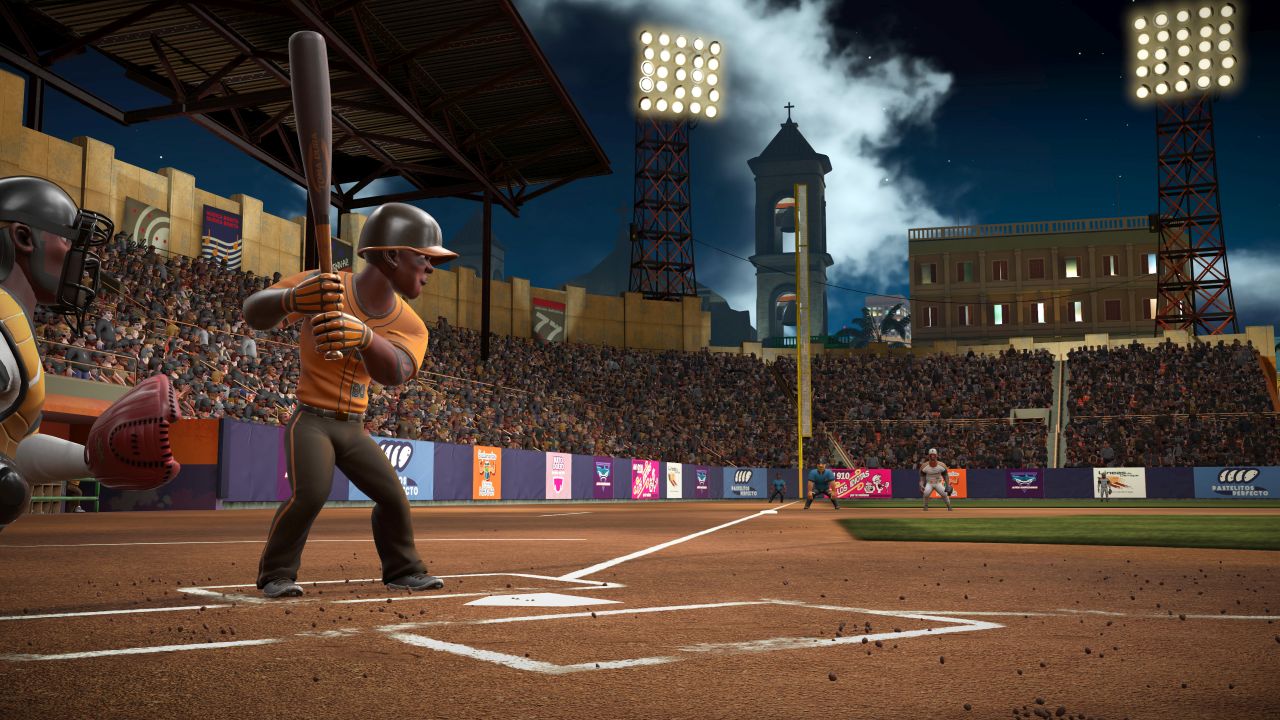 The multiplayer offerings are solid. Pennant Race mode is a competitive online mode that has players battling each other for ranking superiority. Finding matches wasn't bad and the cross-platform multiplayer is an impressive option that too few sports titles have these days.

I did have some technical snafus while playing. The game crashed a handful of times, though it always seemed to have saved, making sure I never lost progress. I did run into rare frame rate drops while playing, once while batting and a pitch was coming in. It's not egregious, but it did stand out to me.

Baseball is a sport that can be enjoyed by people of all ages and all walks of life. Going to a minor league park or a little league game can be just as much fun and dramatic as watching major league teams. The logos, parks, and names aren't nearly as important as the inning, score, and count. Super Mega Baseball 3 proves that baseball is a great sport, no matter who is playing it.

Our ratings for Super Mega Baseball 3 on PlayStation 4 out of 100 (Ratings FAQ)
Presentation
80
The buzz of the field and bark of the umpire is a nice replacement for droll TV-style commentary typical of sports games.
Gameplay
90
Timing your hitting, commanding when to make the spring for a steal, or placing the perfect pitch always feels great. This is a sports game that you play, not one you sim.
Single Player
70
The new Franchise mode is a good first attempt, but it needs refinement and the same customization one would expect from Super Mega Baseball.
Multiplayer
70
Multiplayer isn't the focus here, but if you want to play meaningful multiplayer games, "Pennant Race" is a good way to do that and the cross-platform aspect is impressive.
Performance
60
Crashes and frame rate drops are annoying, but luckily I never lost meaningful progress or felt it was ruining the experience.
Overall
77
Super Mega Baseball 3 is the perfect game if you're finding yourself burning out on more traditional sports sims. Its focus on gameplay and a fun suite of customization tools gives the experience a decidedly different flavor than most others in the genre. 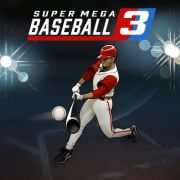