Holding Out For A Hero

Nameless goons in gaming often get no respect. The warm bodies that only serve as a mere obstacle for the hero to conquer. These loyal subjects do the grunt work and get little to show for it. To be fair, they rarely have a reason to celebrate. What if that wasn't the case, though? What if the minion took out the good guy? What then? That's the question Underhero both asks and answers. As it turns out, there's more to life than just waiting to be beaten up. 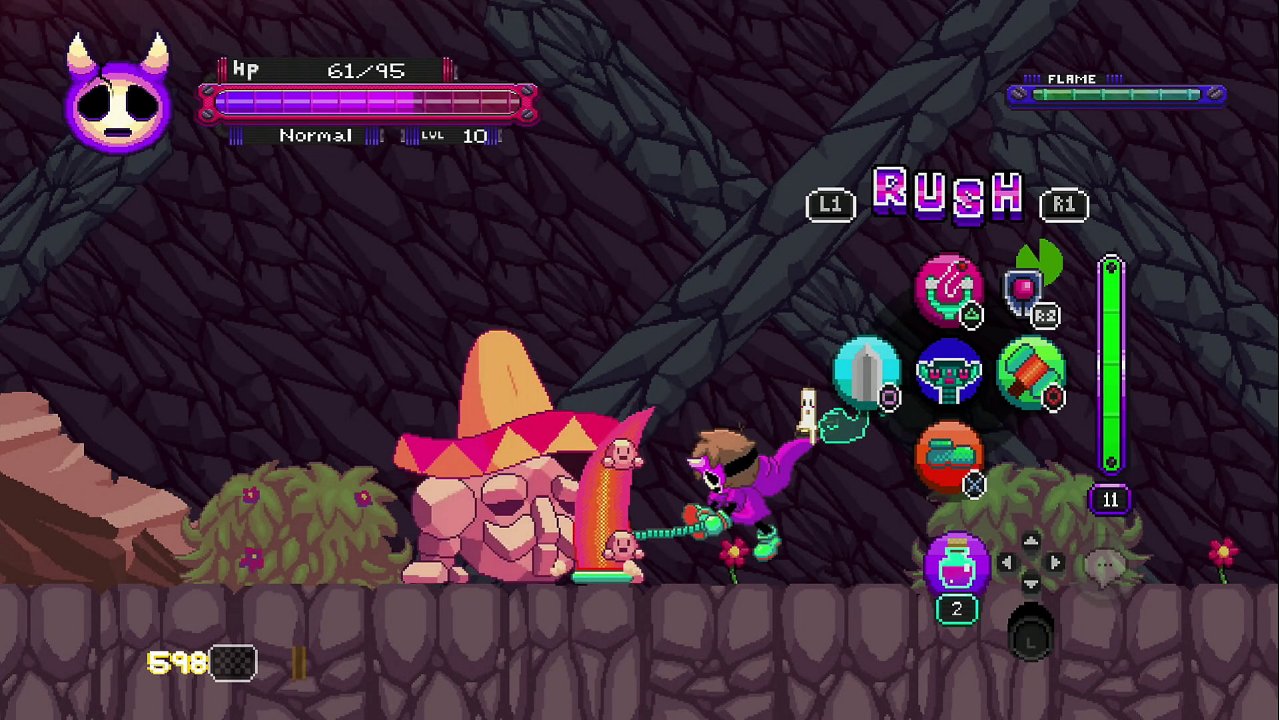 As the title helpfully reminds us, the cycle of the hero saving the day is a tale as old as time. Across every land and every dimension, good and evil are always waging war. Typically, good triumphs over the other, but sometimes plans go awry. Such is the case here, as one nameless minion manages to get the drop on the supposed savior. With no one available to fulfill the prophecy now, the responsibility falls to this relative nobody. Together with the mystical weapon known as Elizabeth IV, the masked kid will become the kingdom's unwitting savior.

Mr. Stitches plays the villain, but he's the one that sets the minion off on his quest. For reasons that he won't get into, the kid must return sacred artifacts to three different sub-bosses of the big bad. Each one of these foes has their own unique land you'll need to explore. While that may be your assigned goal, Elizabeth actually wants you to beat each of these major goons again. If they are going to save the day, they need to take out these nuisances.

Despite being on the side of evil, the underling is not necessarily a bad guy. At the very least, he's easily swayed to take up the fight against Mr. Stitches. He cannot speak, so apparently this makes him quite susceptible to being convinced to switch sides. It also makes him a flat character, despite the occasional fun pieces of animation. Any personality the title has comes strictly from the supporting cast. Stitches is a fun villain, while Elizabeth makes an intriguing companion. Without getting into spoiler territory, the plot also takes some interesting turns regarding the prophecy of good vs evil.

When you are traversing these worlds in Underhero, the gameplay is that of a traditional platformer. It almost resembles a metroidvania at times. The levels are decently large, and full of secrets to uncover. From the helpful, such as stat boosts, to more of an aesthetic bonus, such as soundtrack additions. I do think the physics feel a little too floaty at times. There's nothing ever too difficult in the game, but it can be easy to overshoot smaller platforms. 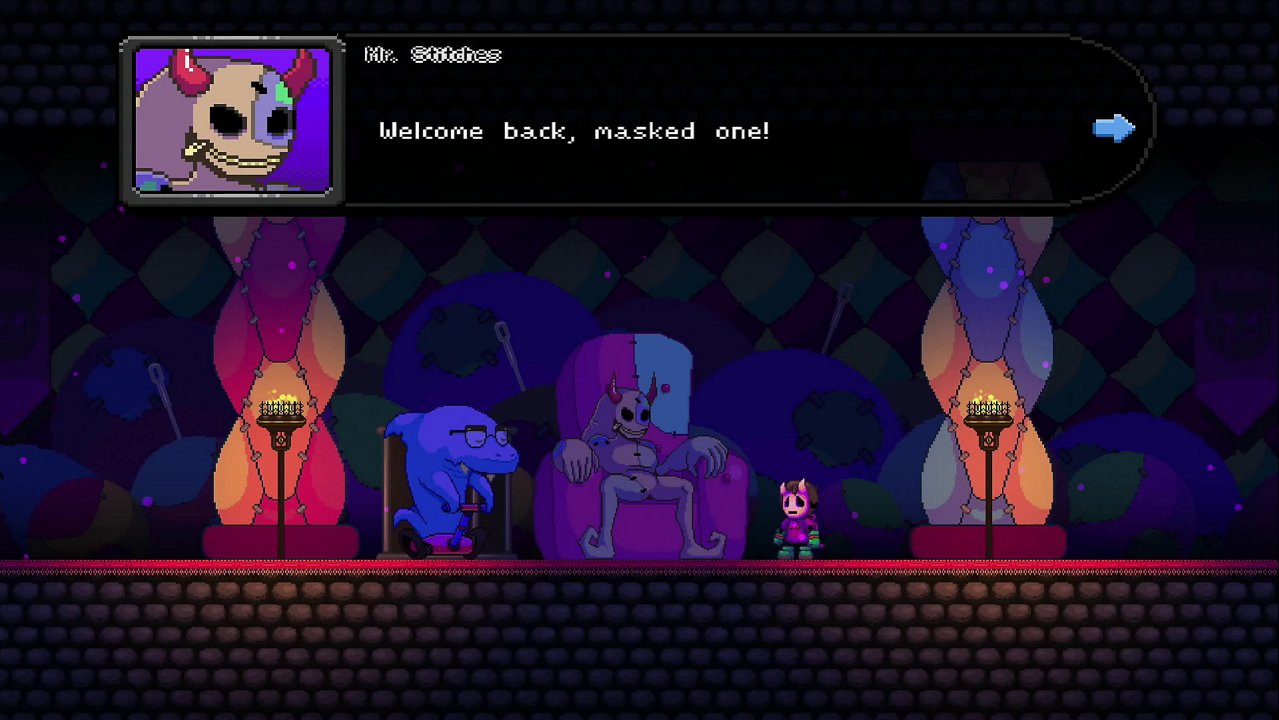 Underhero struggles the longer it goes on, though. After you complete the three main worlds, there's a secret area you go to that doesn't match the others. It's a pain to explore, and the gimmick it uses is tiresome. This is followed by some light backtracking through two of the previous levels, which is more boring than anything else. Then another long, painful level. It drags on for way too long and throws gimmicks at you that don't really gel together. It feels like it was just padded out with extra rooms in order to extend the campaign. It really puts a damper on what had been to that point a solid little adventure.

Rather than follow the path of a platformer, the combat in Underhero is more akin to an RPG. When you do confront an enemy, the action slows down into a stamina-based attack system. Elizabeth serves as your main weapon, but you eventually acquire a slingshot for flying foes and a hammer that deals out serious damage at a cost. Regardless of what weapon you use, you'll be using up a good portion of your stamina. In order to get that back, you can either wait and recharge, or dodge and parry an attack. Enemies have tells that you can easily decipher, so avoiding damage isn't too much of a challenge.

When I first started getting into the title, I admit, I didn't love the combat. It felt slow, and the aiming mechanics felt inconsistent. The more I spent with it, though, the more I began to appreciate it. It can work you into a groove as you begin to embrace the repetition. Which makes sense in a way, as following along to the beat of the backing music is important. One thing I would have appreciated, though, was a little more variety in weapon development. Not even necessarily new weapons, but maybe just some modifications to the ones you do wield. It could've added another layer of strategy to the action.

Not every battle plays out exactly like that, though. Boss battles blend that strategy hybrid with some light puzzle platforming. You'll often need to figure out how to stun the baddie before you can begin your assault. And if you want to avoid doing battle against smaller enemies, you have a way out as well. Considering you were just on the same side as these guys a short while ago, a simple bribe is often enough to get by. Not only do you avoid the battle, but you may even get a reward for taking this approach. It's a humorous option that fits perfectly in the gameworld. 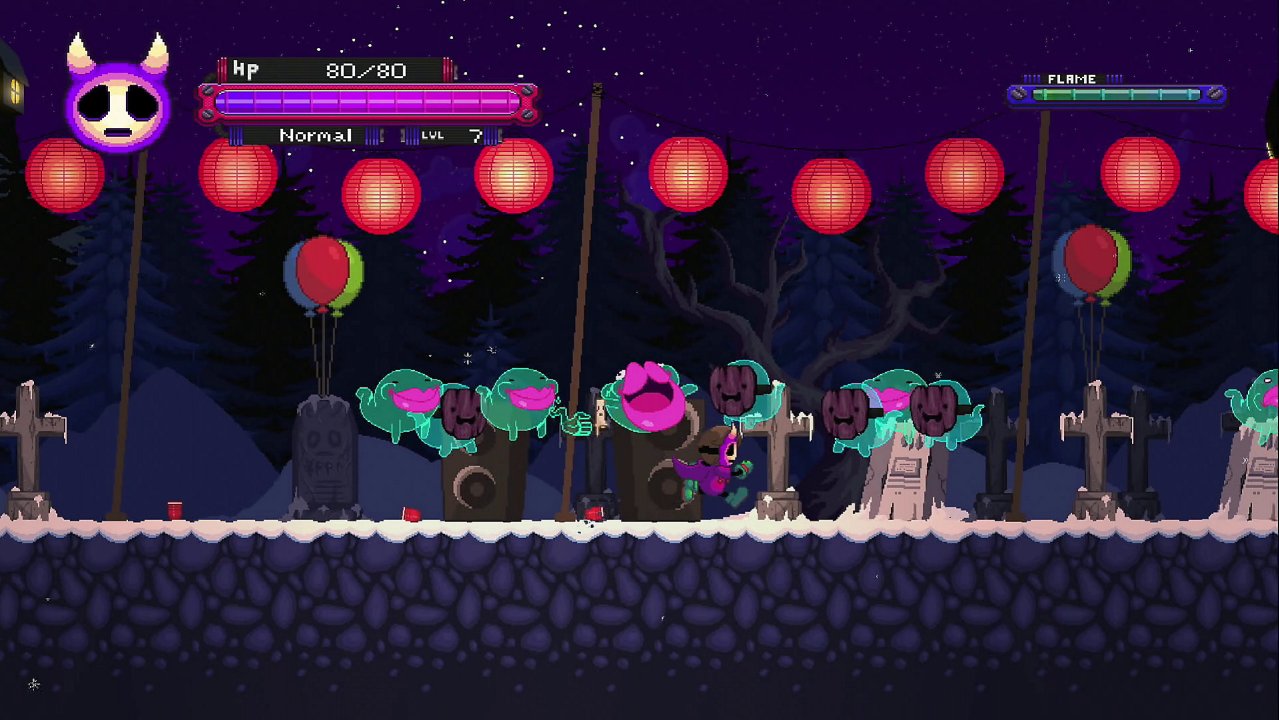 Outside of platforming and action, there are some minigames found in Underhero. Usually at least once per level, your party gets abducted by a puzzle master in order to answer trivia questions based around the world of the game. Hope you spoke to all the enemies! The title also throws curveballs at you like ice skating contests and salsa making that somehow feel completely in line with the title's tone. These asides don't last long, but they go a long way towards breaking up some of the monotony.

In a world flush with them, it can be hard to visually stand out as a 2D platformer. I wouldn't call Underhero unforgettable in that regard, but it does have some quality visuals. The character animations are solid and give the game some personality. I'm a big fan of the sprites as well. They do get reused a little too often, but they are all pleasant to look at. I do think the levels themselves could have used some more detail. It would help with how easy it can be to get lost at points, as well as help freshen things up.

While there has already been one patch released, there are still some unfortunate bugs lingering in Underhero. Before said patch, one of the bonus rooms was completely inaccessible. You would just fall through the floor repeatedly until you were eventually kicked out. A bigger problem now is that one of the final, mandatory challenge rooms can be unbeatable due to a platform being bugged out. You can sidestep it by making sure the two other platforms in the room aren't moving when you go to move this third one. But the only reason I know that is that I had to look at the developer's Twitter page for help. Hopefully that gets fixed soon, as that is a pretty major issue.

Both in terms of gameplay variety and plot development, Underhero is a unique experience. The title blends together basic platforming and rhythm-based combat into a concoction that never feels forced or awkward. It's not perfect at either of those things, but competent enough to be enjoyable. And the plot is not only humorous, but also manages to move in some interesting directions. It's a refreshing take on the chosen hero trope. It does lose steam as it goes along, but it doesn't overstay its welcome either. In a hard genre to stand out in, Paper Castle Games has delivered an adventure that is uniquely its own.

Our ratings for Underhero on PlayStation 4 out of 100 (Ratings FAQ)
Presentation
70
Certain sprites have a tendency to get reused too often, but I can't deny that the character designs aren't memorable. More variety also would have been appreciated when it comes to level design as well.
Gameplay
74
Underhero mixes together several disparate elements into a successful concoction. There's platforming, light-RPG combat and even some wacky minigames. I wouldn't say any of these elements are perfect, but they are more than above average.
Single Player
78
Although it drags towards conclusion, Underhero is consistently entertaining and frequently hilarious. The plot goes to places you would never expect it to.
Multiplayer
NR
None
Performance
65
Performance is mostly solid across the board on the PlayStation 4. There are a handful of glitches that can prevent progress, though.
Overall
72
Underhero is a memorable and charming little adventure. By constantly mixing things up, the gameplay never feels stale. And the plot twists your expectations in ways you would have never seen coming. 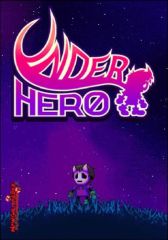