When someone describes a game as accessible, charming, and focused on art, many players may scoff and roll their eyes. Another "free spirit" indie effort, more concerned with its message than gameplay? Sometimes that's true, and other times it's completely off the mark. Making a game that everyone can enjoy is tough, as having overly simplistic mechanics will make all but the youngest players bored. Focusing on art is tricky, as it's totally subjective and may not be everyone's cup of tea. Making a game charming faces both of the above problems. But developers Pixelopus have caught lightning in a bottle with their sophomore effort, Concrete Genie. The game manages to be all of the above, and it works. 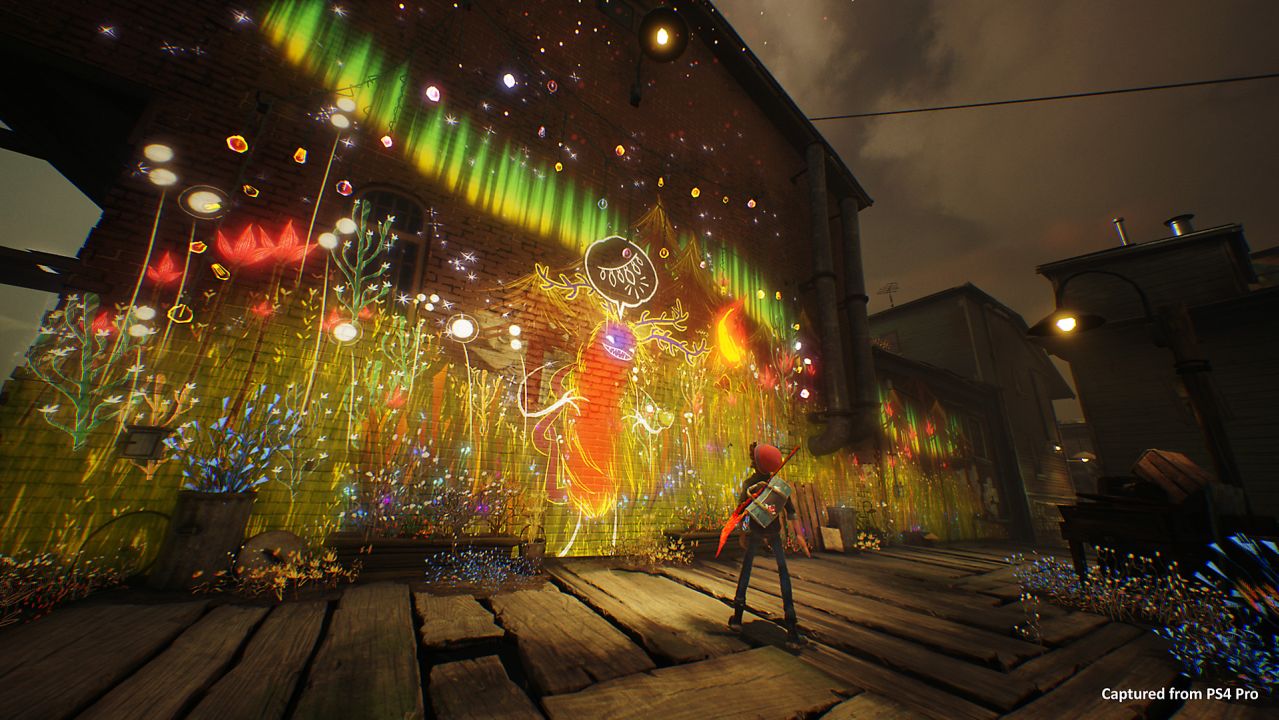 Players take control of Ash, a young boy who frequents the now-abandoned town of Denska against his parents' wishes. He finds it peaceful, and reminiscent of the days when the locale was still full of life. A generic "darkness" has taken over the town, blocking a few streets and chasing out all life. Ash is a sort of an artist, with a sketchbook where he draws about the town's past, as well as creatures he calls Genies. However, he's not alone in visiting Denska - a group of kids bully him around, and during one such encounter they get his sketchbook, rip out its pages, and send him on a trolley up to a lighthouse. There, he encounters a genie called Luna who comes to life with the help of a special magic brush. Ash realizes that he can draw on the walls with this brush, and bring these paintings to life. With the view from the lighthouse, he also sees that the darkness is progressing. As such, he sets out to stop this unknown evil with his newfound powers.

The story of Concrete Genie is quite straightforward, but it is decently told nonetheless. Ash will have to confront the bullies, learn why they behave this way, and of course stop the generic evil force that's taking over. None of the narrative elements are all that original, but they work sufficiently well and Ash remains a grounded enough character to become invested in, even for older players. The writing and dialog are also decent enough not to be distracting, and are not squarely aimed at a younger audience, despite the game's sensibilities.

Perhaps the game's biggest selling point is its unique painting gameplay, and it's where the title does shine. At any time, Ash can walk to a wall surface in the town and pull out his brush. This brings up the simple but intuitive interface where you select the type of brush art you want, and then simply apply it where you want with the cursor. Ash can draw the sun, clouds, grass, stars, and lots of other objects, helpfully grouped into four categories. You unlock more brushes over the course of the game as collectibles to find around the levels - the ripped pages from your sketchbook. The mechanic of creating drawings like this isn't entirely unique, but the scenery that you draw comes to life thanks to wonderful animation and color variety, and it really does feel like you're creating some striking landscapes. 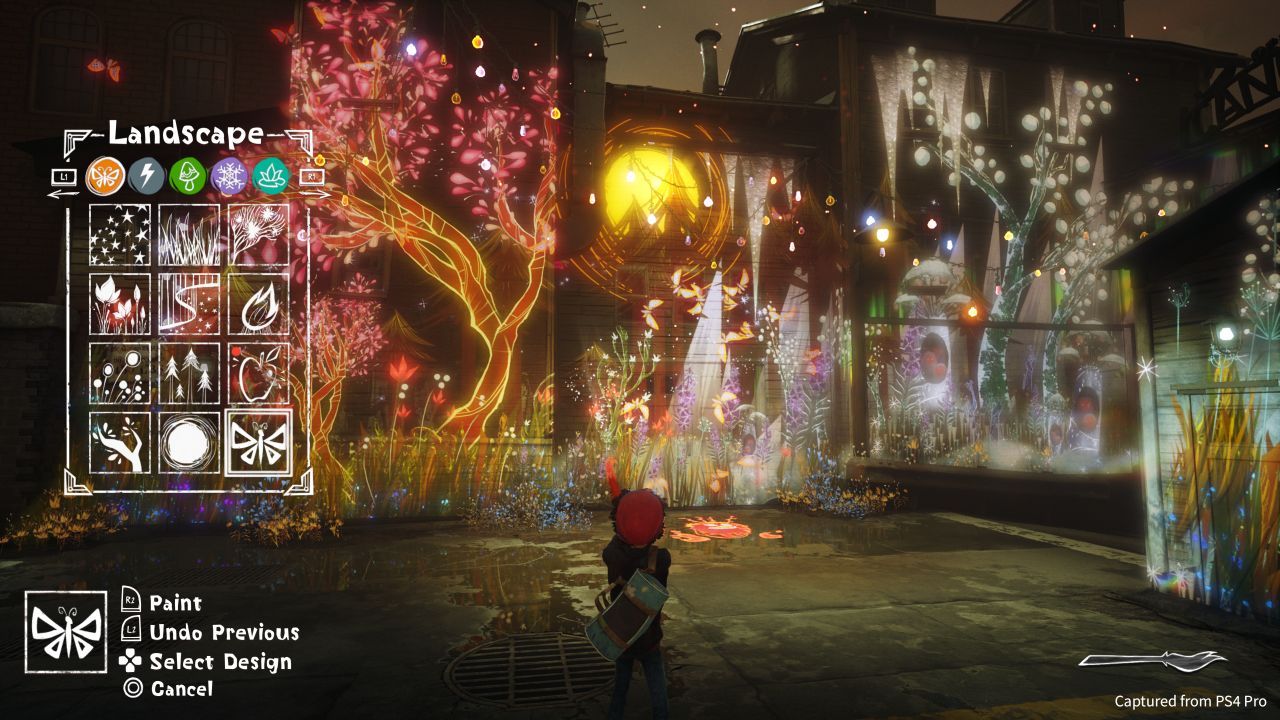 But the stars of the show are the Genies. You can only create them at certain points, and thus they are limited, making each feel like a unique creation. Like brushes, you find many pages from your notebook that unlock different body types, tails, and ears/horns to decorate with. Once ready, you bring your Genie to life. Each one is an engaging creature that hangs out with Ash, helps him solve a few simple puzzles, and interacts with the scenery you draw. There is no doubt - the Genies are simply delightful, thanks to their movements, animations, interactivity options, and voices. Your interactions with them are worked into the gameplay well, as they move across connected walls to help Ash clear debris or activate an electrical switch. But you can also simply say Hi to them, draw what they want to make them happy, and just enjoy their company. They will smell the flowers you draw, cover themselves from the rain, and run around with pinwheels. Who needs Pokémon?

Aside from the painting, you'll be doing some running around, jumping, and avoiding bullies. The game takes place in a few small open levels inside the town, as players unlock a few different areas to explore. During this first half of the game, the game is an enjoyable adventure as you look for sets of light bulbs that you must simply paint over to activate. Activating a few of these in the area clears out the darkness from the section of the town, letting you move on. The jumping and climbing is very basic, but it works fine with the small environments. The bullies also hang out in the area, but they are easy to avoid and can't follow if you climb something.

The game tries to add a bit more gameplay variety to the Genies by making them be either of fire, electrical, or wind type, but this simply means they look different in color and have a different function for a specific puzzle. The puzzles are simple and take little thought to solve; it’s just a matter of calling over the Genie and letting it do an action. There's also the mechanic of Super Paint, a refillable meter that you can fill by making your Genies happy, by drawing something they want. You need this Super Paint to clear walls that are covered in Darkness. It's a simple mechanic with a goal of giving you yet another reason to interact with the Genies - if you need it. 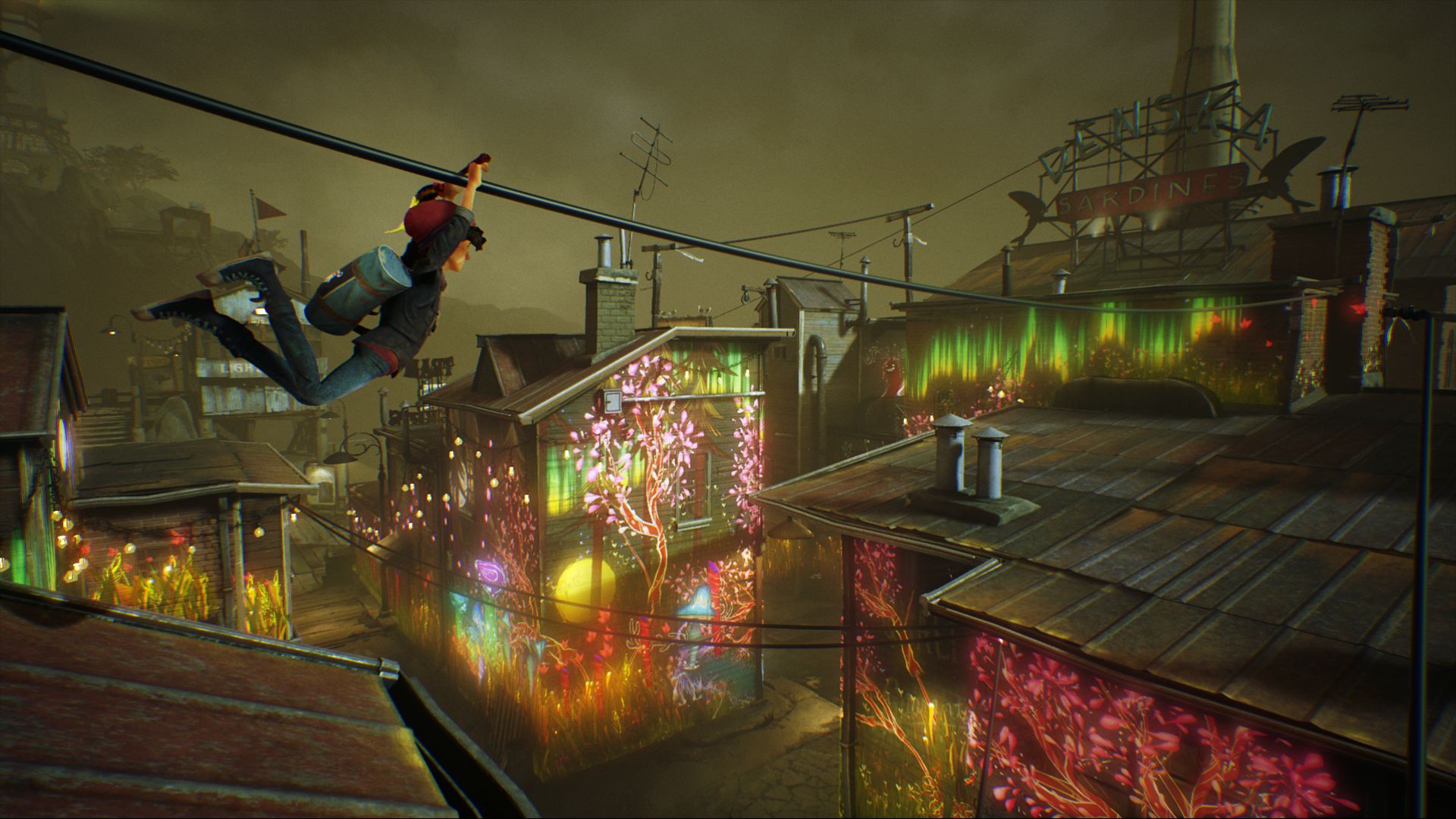 Concrete Genie is at its best during the first half, as you explore the small section of the town, climb around rooftops, draw on walls freely (your drawings remain for the rest of the game), and find optional items like scenes and billboards that require specific brushes to complete. However, in the second half of the game as the story picks up, you're going to travel through a series of linear levels, and even though you return to the town once or twice, you've already seen everything in it. The game just feels like it's over a bit too quickly, and it would have greatly benefitted from more content in its first half, where you can explore and find optional drawings to do. Having found and completed over 80% of all optional content, the game clocked in at under 6 hours, which felt a bit brief. It would have been great to spend more time in the town with the Genies. Instead, there are new gameplay mechanics introduced late on, that don't really fit the theme.

After completing the campaign, you are free to run around the town and check out your drawings, or draw more if you want. You can also venture into the dedicated Free Paint mode, which simply lets you start the town over and draw from scratch. There's also a photo mode, and PS VR support (not tested in the scope of this review).

The game runs without issues, and it aims to focus on its art style rather than technical prowess. The world that Ash explores is fairly featureless and grey, which is why adding art to it helps the game come alive. Still, it's a fairly generic town without much distinctive architecture or memorable locations. But the art that Ash draws is, as mentioned so many times, simply wonderful. It's colorful, it's excellently animated, and the Genies are extremely believable as 2D living creatures, from their movements to basic facial expressions. There are also story cutscenes that feature great art, but they are far too few in number. The soundtrack is fitting, focusing on piano and cellos to provide some ambient music. 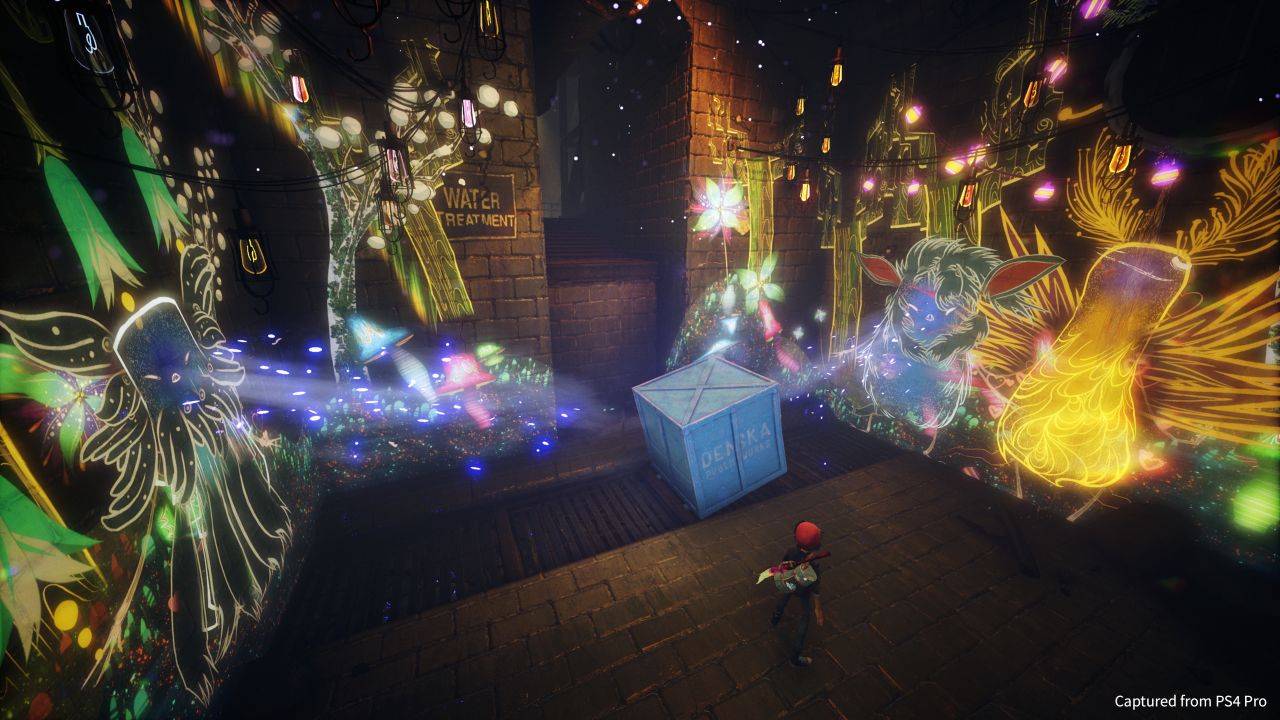 Concrete Genie is an accessible and charming game for almost everyone. The traditional mechanics, such as exploration, puzzles, and platforming are done decently enough not to distract from the main draw - its art. The painting mechanic may not be completely original, but it's executed excellently. And of course, the Genies themselves are simply charming and amusing, and watching them exist, interact, and respond to Ash brings childhood-like joy. The game may not have a ton of great ideas or gameplay variety, but few other titles can offer such pure charm.

A digital code was provided by Sony Interactive Entertainment Canada for the purposes of this review.

Our ratings for Concrete Genie on PlayStation 4 out of 100 (Ratings FAQ)
Presentation
88
The Genies are charming, engaging, and are simply great companions. They owe this success to the fantastic art and animations, which also help other scenery feel alive.
Gameplay
74
A fairly simple exploration/paltformer, and one that successfully incorporates the drawing element into the gameplay.
Single Player
70
The story is straightforward. The exploration moments are good - we just wish there was more of them. The game becomes linear a bit too soon.
Multiplayer
NR
None
Performance
90
No issues
Overall
77
Concrete Genie is a charming and wholesome adventure that makes up for its rather ordinary gameplay with striking art and personable creatures. 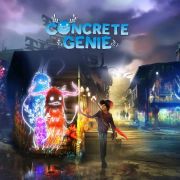 649. Ratchet & Clank: Into the Nexus
PlayStation 3

All videos for Concrete Genie (3)
Advertisement ▼