A harmless dose of hectic mutant-mashery

It's never too often, but whenever I consider braving Steam's Early Access library in pursuit of rare treasures, much of the stuff I'm scrolling through resembles Final Days. A 2D, co-operative top-down shooter set in yet another zombie apocalypse, +7 Software's now fully-released product is pretty much everything you'd expect: hectic, arcadey, and drenched in standard B-movie guts and goo. But it is earnest in its appeal to genre fans, and varied enough in places to warrant a return; even if the more humdrum aspects are likely to make it a quick one. 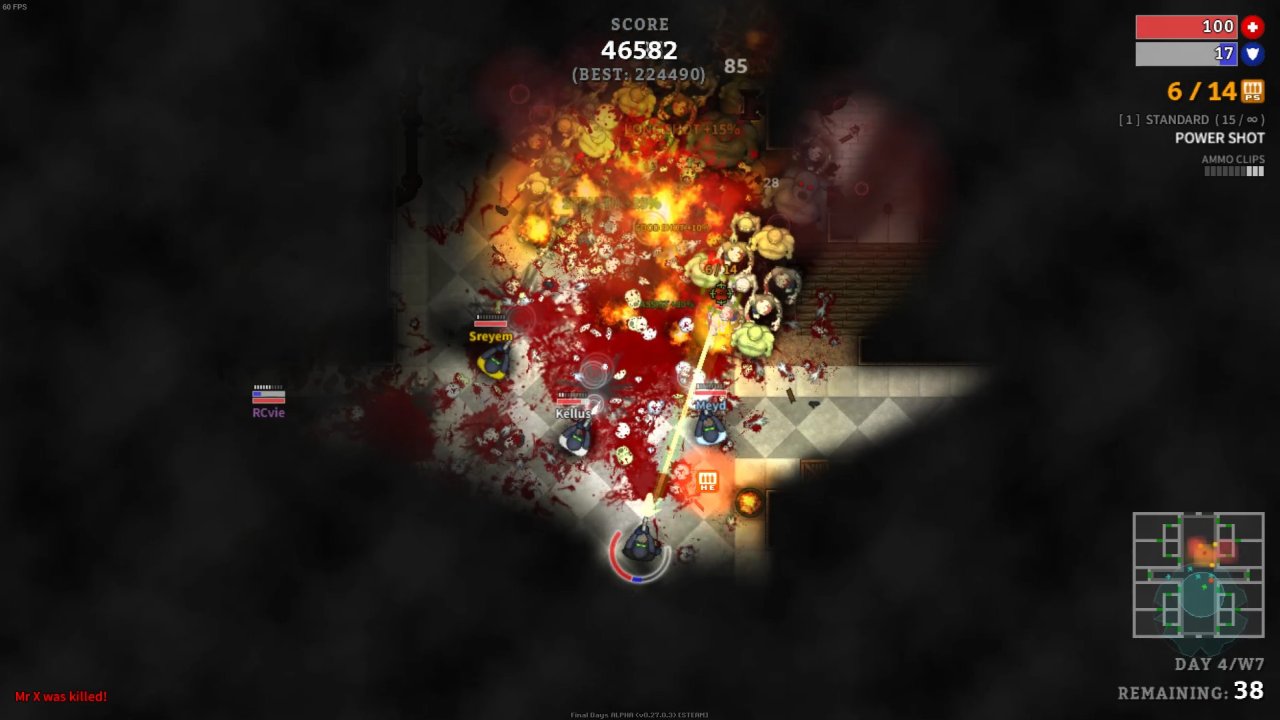 The setup is pretty simple. It's the apocalypse, and it's up to you and your buddies to survive seven days in a dilapidated bunker by taking up arms against a horde of disgusting zombie mutants. It's nothing we haven't seen before - the art style even shares its dingy, B-Movie grossness with the recent Garage: Bad Trip - but it's early assurance of the specific experience Final Days aims to provide, and for which specific audience.

Final Days fuses Alien Breed's shadowy top-down maps with the hectic style of Splatter: Zombie Apocalypse, engaging players in seven rounds of wave-based combat. In either local or online co-op, you survive seven days of mutant assaults, each with its own waves of varying size and difficulty. There is a single-player mode if you'd prefer to go it alone, with the thankful option to play with, or without AI accomplices.

There's also the tiniest bit of Hotline Miami in the precision aiming of the mouse and the grid-like character movement, as well as the additional 'Eradication' mode that sets you on twitchy rampages as you clear out areas floor by floor. But though you'll gain extra ranking points for nailing a headshot or inventively setting enemies alight, accuracy isn't as crucial to survival as it was in Dennaton's lurid 80's shooter. The style is also markedly different, preferring to replace the methodical strategy central to Miami with the frenetic shoot-everything-that-moves logic of a Sam Raimi horror movie.

And like those movies, things get crazy. Fast. Though the lighter 'Recruit' difficulty is perhaps a little too breezy for most players, Veteran Mode will throw anything from hiding pairs of flesheaters to claustrophobic zombie scrums, many of which catch you off-guard given you've only a flashlight to see. If you're looking to last all seven rounds without stages becoming tedious, you're best off Veteran'ing it. 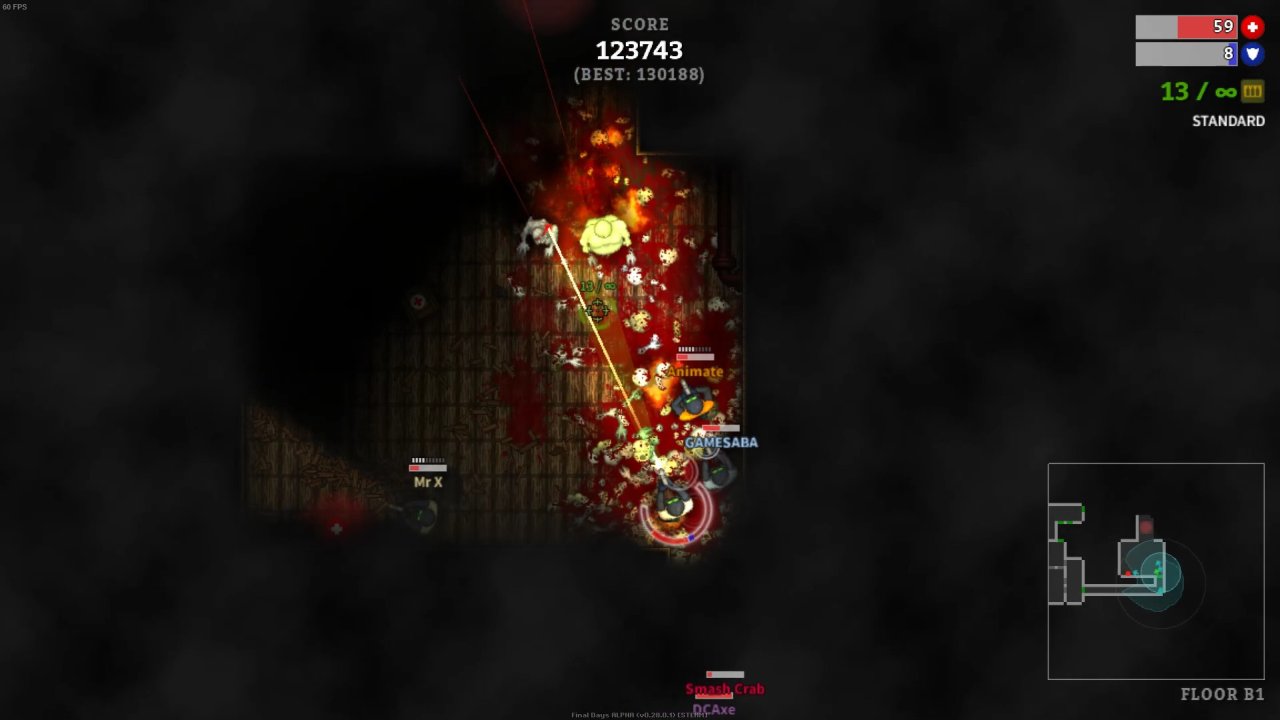 It must be said that stages never lack structure, though; stages most often progressing naturally from suspiciously light introductory waves to boss-like final stands. Sometimes the game will decide your first wave was too gentle and throw you into a hectic hell pit in your second, but if anything they're fun curveballs to make sure you're awake rather than truly unfair or exploitative. It helps that you're sent back to the beginning of the day rather than the entire week if you die, which does a lot to curb frustration after backing into one of the map's many tight corners to find yourself mauled by a giant.

It's surprising to see how long this energy keeps up a wave-based shooter predicated upon defeating the same enemies in similar environments time and again, but largely that's thanks to the impressive array of pickups on offer.

Though the predictable health and shield-boost pickups lay scattered across each map to support the player's survival, enemies will drop various gun and power upgrades to lend your team some extra beef. Whether it's an old reliable pipe bomb or an OP 'Hot Shot' to blitz lethal hordes into clouds of mutanty flames, each weapon behaves differently, lending just enough novelty to the samey wave-based structure to prevent the mutant squashing becoming tedious.

There is, however, an expiry date even to this brand of novelty. Once you're well familiar with each pickup's peculiar method of annihilation, the responsibility for keeping things interesting begins to fall more on the game's social elements. Waves can quickly become routine if you're not playing with friends, and teasing death by way of a well-timed explosion isn't nearly as thrilling with no one to celebrate with.

For this reason, I get the impression Final Days would be better suited to friends who can communicate directly with each other during waves. Things were far more exciting when I could yell over my shoulder that I needed support, or that I'd found an explosive barrel that could be our saving grace. Playing with randoms is perfectly doable (and admittedly has its own anonymous appeal), but as might be expected of a co-op shooter with no in-game communication, the camaraderie is nowhere near as intense. 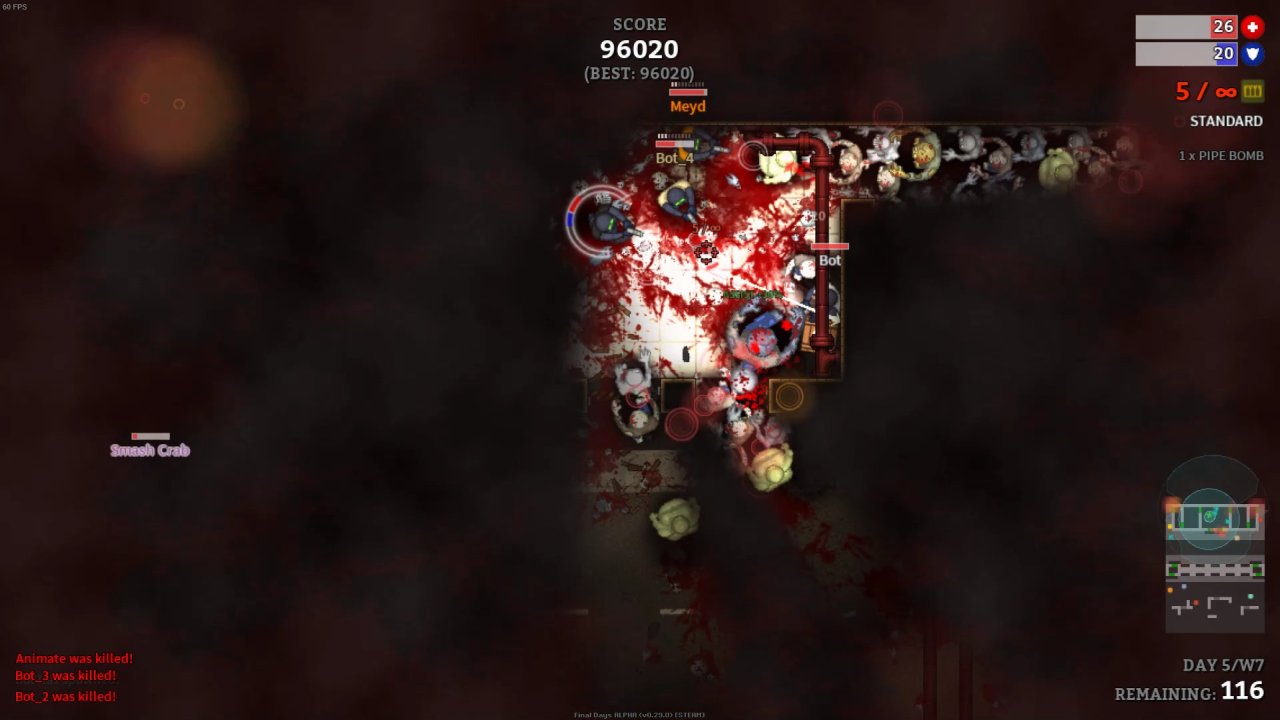 Nevertheless, the developers go to considerable lengths to keep things fresh by providing a host of unlockable maps, modes and trials to dive into, many of which merely require the player to complete one of the default routes, than accumulate skill-oriented achievements.

Even when ranking last on my team following a tough fight, I often gained an alternate mode or trial for my trouble, or additional maps that allowed me to duke it out in a graveyard, or take on a stampede of bile-spewers with my friends in an abandoned mall. With new content almost constantly being unlocked, Final Days does a lot to preserve its replayability, even for those less experienced in the genre. Following the notorious over-reliance placed on audiences by some recent games, that's as refreshing a choice as it is intelligent.

It's pretty obvious that Final Days rests on players' bond with each other. By this I mean it's an overwhelmingly average solo product, but dedicated enough to providing a good time that the experience is made by its players. Though predictable, straightforward and ever so slightly silly, Final Days respects players' ability to create their own enjoyment without slumping into lifeless design. It makes sure to give you all the toys you need to survive and some enemies to try them out on, before leaving you and your buddies alone to enjoy the apocalypse together.

Our ratings for Final Days on PC out of 100 (Ratings FAQ)
Presentation
70
Though not quite as stylish as other B-movie-inspired shooters, the bile-drenched maps supply an apt setting for a fun, humorous mutant-squashing romp, with a surprising variety of maps to choose from.
Gameplay
72
A top-down, wave-based shooter that fully embraces its worn zombie-apocalypse premise, Final Days mixes overwhelming hordes with obstacle-laced level-design, including a surprising variety of alternate maps, pickups and modes to give longevity to its repetitive structure.
Single Player
65
Though mainly a multiplayer deal, the claustrophobic, wave-based stages are tense enough to provide an engaging single-player shooter. This said, it's easier for stages to become repetitive when you've no-one to celebrate your victories with.
Multiplayer
70
Supporting online, local and split-screen, Final Days is best experienced between friends who've direct contact. Playing with randoms is perfectly possible, but stages may begin to drag without the ability to celebrate with your friends.
Performance
(Show PC Specs)
CPU: Intel Core i7-4710HQ
GPU: Nvidia GeForce GTX 860M
RAM: 8GB
OS: Windows 10

76
Aside from some very mild framerate hitches, Final Days plays smoothly, and though perfectly playable with a controller, the tightly-packed maps make the keyboard and mouse setup the preferable option.
Overall
70
Final Days fully embraces its identity as a predictable co-op romp, and in so doing will likely provide genre fans with a comfortable mutant-mashing session.

1108. Journey to the Savage Planet
PC