Flailing, wailing and entrailing in this B-movie top-down shooter

Before the fall of video rental in the early 2000s, I have this distinct memory of hanging around Blockbuster like a shyer Kevin Smith, surfing the shelves for videotape oddities to convince my parents to please let me watch. Blissfully unaware, I’d come home arms laden with gooey troll heads, exploding Bruce Willises and refrigerated cats (all in video format, mind), all with the comforting reassurance that none would be on my shelf long enough to attract simpering looks from visiting family and friends. It was all the ramshackle, throw-everything-at-the-wall thrill ride a (frankly, easily frightened) child could ask for. Usually more, but let’s save my chronic insomnia for another day. 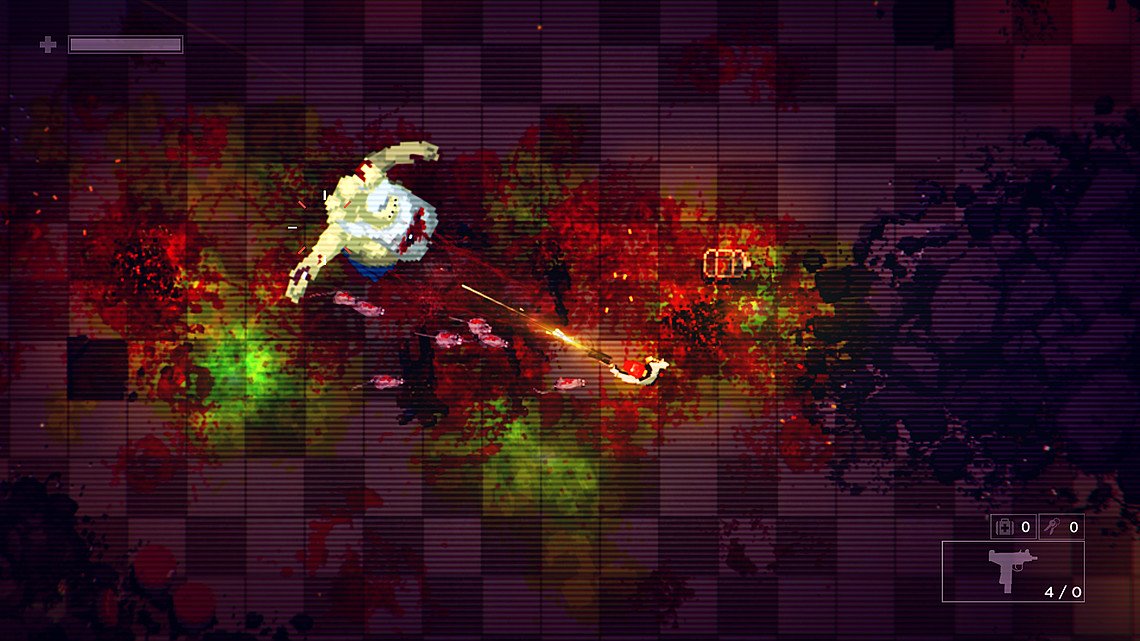 In one respect, Garage: Bad Trip absolutely succeeds as a ridiculous love letter to the corpse-infested, gun-flailing bilge for which the B-Movie genre has come to be celebrated, with its underworld of nasties tapping somewhere between Hellraiser and The Evil Dead. In another, it arguably fails, in that it provides alongside it a varied top-down shooter that feels more structured than the B-Movie ever did.

The premise is just the convenient McGuffin you’d expect of a cult-movie. After waking in the trunk of wrecked car with no memory of having got there, you find yourself wandering through a derelict parking garage with the distinct impression that something terrible has happened. As both B-Movie logic and Garage: Bad Trip affirm, that ‘something’ inevitably comes to light as you explore the garage’s seedy, multi-levelled complex. Turns out, it’s zombie-central; a blood-spattered underworld of creepy hybrids and feral flesh-eaters. Apparently too darn curious to turn tail now, our hero becomes embroiled in an all-out conspiracy, compelled to excavate the garage’s dire innards to expose even direr secrets.

Garage: Bad Trip will no doubt be compared to Hotline Miami, both for its top-down perspective and seedy, semi-hallucinatory visuals. There are similarities within the gameplay too; the aim is to work your way down a multi-levelled complex, pulpifying every enemy you see while receiving cryptic info via a telephone line.

But the games are quite different in terms of core principle. While Hotline Miami was an exercise in systematic planning and sleek execution, Garage: Bad Trip is more atmospheric, exchanging heart racing queues of enemies for jumpy collisions with deteriorating corpses. Bad Trip takes its time where Hotline Miami delights in frenzy, allowing tension to build as levels alternate between hypervigilance and pulsy run-and-gun shootouts. It’s also more forgiving in replacing the one-tap kill system with a health bar, with each floor containing health / speed pickups to rescue you from the brink of death, and having three difficulty settings. 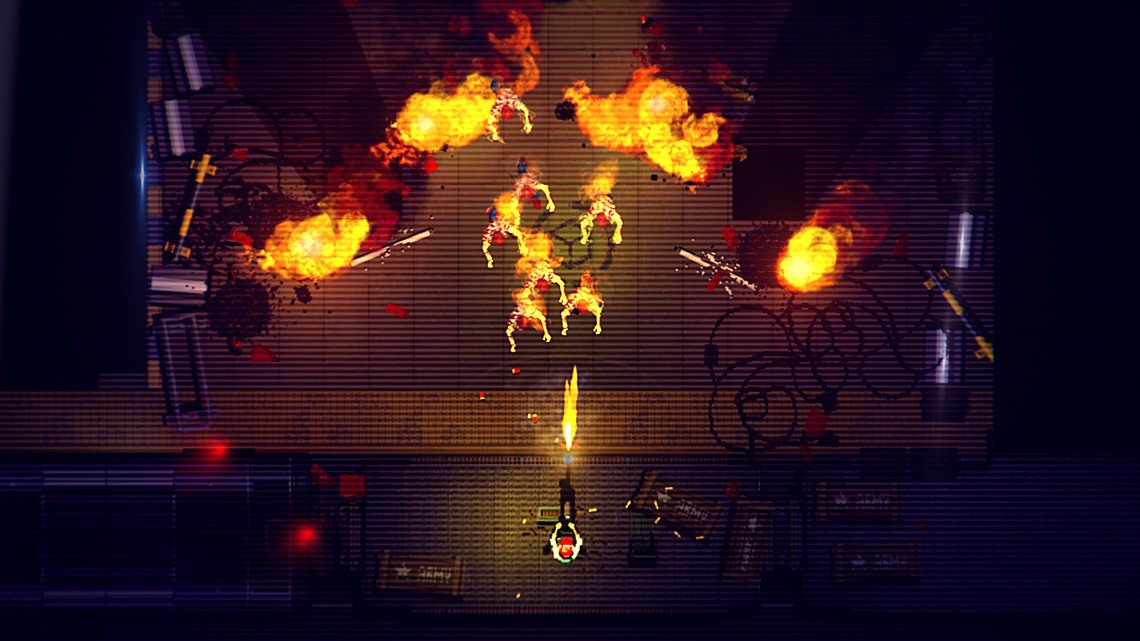 This isn’t to say the slower pace necessarily sucks the thrill out of combat. Indeed, the similar crosshair mechanic adds a precision element that stops the repetitive zombie-smashing becoming rote. The player must manually orient the protagonist’s line of sight using the mouse (or analog stick), which requires them to keep tabs on ammo capacity, oncoming attacks and their own positioning if they are to escape alive. It’s not pedantic by any means (you’re never required to pull headshots or break enemy armour), so the challenge-level is kept accessible, but the need to continually reorient yourself in relation to oncoming enemies is a simple, effective way of sustaining tension during the action sequences.

Brief hiatuses from the adrenal combat arise in the form of simple exploratory puzzles, in which the player is required to excavate degenerated store rooms or upturned trains to find components to access the next floor. Cutscenes are the height of 80’s parody, performing corporate caricatures who advertise poison under sensually sighing female bottoms in a crude(r!) rendition of They Live. Though never far from the tense hypervigilance of a survival-horror shooter, these sequences are well-timed excursions from the intense action, lasting just long enough to ensure the gun-toting bombast returns to open (albeit possibly dislodged) arms. There’s even a brief motorcycle scene, in which you desperately mow down zombies as you rip and roar to freedom.

Though the control scheme noticeably lacks the finesse of Dennaton’s 80’s slasher (movement is often ponderous where enemies are comparably nippy) Garage: Bad Trip continually demonstrates a flair for visual design, relaying its love for B-Movie schlock in surprising depth. Enemies will run around clawing at the air if you behead them, and I was congratulated for kicking an animated rat corpse into a heater with an appraising “Goal!”.

Perhaps it’s this unrelenting variety that renders the boss fights a little underwhelming. You can usually predict an oncoming boss fight from the similar room layout and design, and more often than not they amount to the same belching ogre, or some ghastly experiment that chases you around until you kill it. The challenge level is certainly there, but their similarity in look and behaviour deprives bosses of the charisma games like Hotline Miami, Enter the Gungeon, or even Silent Hill displayed in abundance. 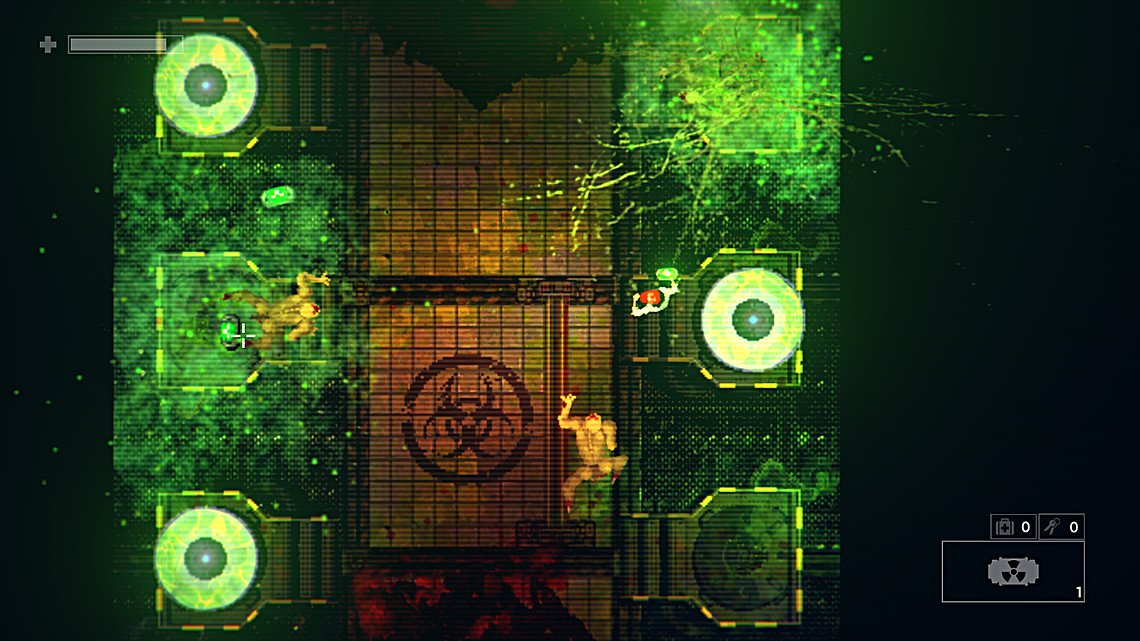 This said, the constant changes in pace generally make up for it. Like the twisted world of horror, from which it draws, the speed with which Garage: Bad Trip moves between tight arena shooting, exploratory puzzling and atmospheric story segments leaves very little time to get bored in between. In a balancing-act rarely seen (sadly) in video games, Garage: Bad Trip successfully recreates the thrill of the fist-pumping genre pic in an interactive format. It works its love for camp action into its mechanics, and as such invites players into the ruthless, axe-flailing world of the hapless horror protagonist.

70
A few framerate hiccups arise from time to time, usually during arena shootouts involving large groups of enemies. Never detrimental, but it occasionally makes the line of sight mechanic feel fiddly during encounters requiring fast action.
Overall
78
Garage: Bad Trip is an unrelenting barrage of camp horror and ridiculous action sequences whose grungy VHS aesthetic will likely appeal to cult-movie enthusiasts, while also managing to be well-structured, accessible top down shooter with its very own grotesque thrills.