A joyless, cumbersome thriller with glimpses of brilliance

Out of a long list of frustrating games I've played over my many years, Compulsion Games' twisted survival horror We Happy Few has to be near the top of the list, for a multitude of reasons. For one, I can't recall a time I was ever so intrigued by a game's world-building, atmosphere, and premise, while simultaneously so annoyed and angered with its actual gameplay. It's wrought with unrealized potential that struggles to break out of the binding shackles of buggy, cumbersome mechanics, bland fetch quests, unpredictably bad AI, and lengthy load times. 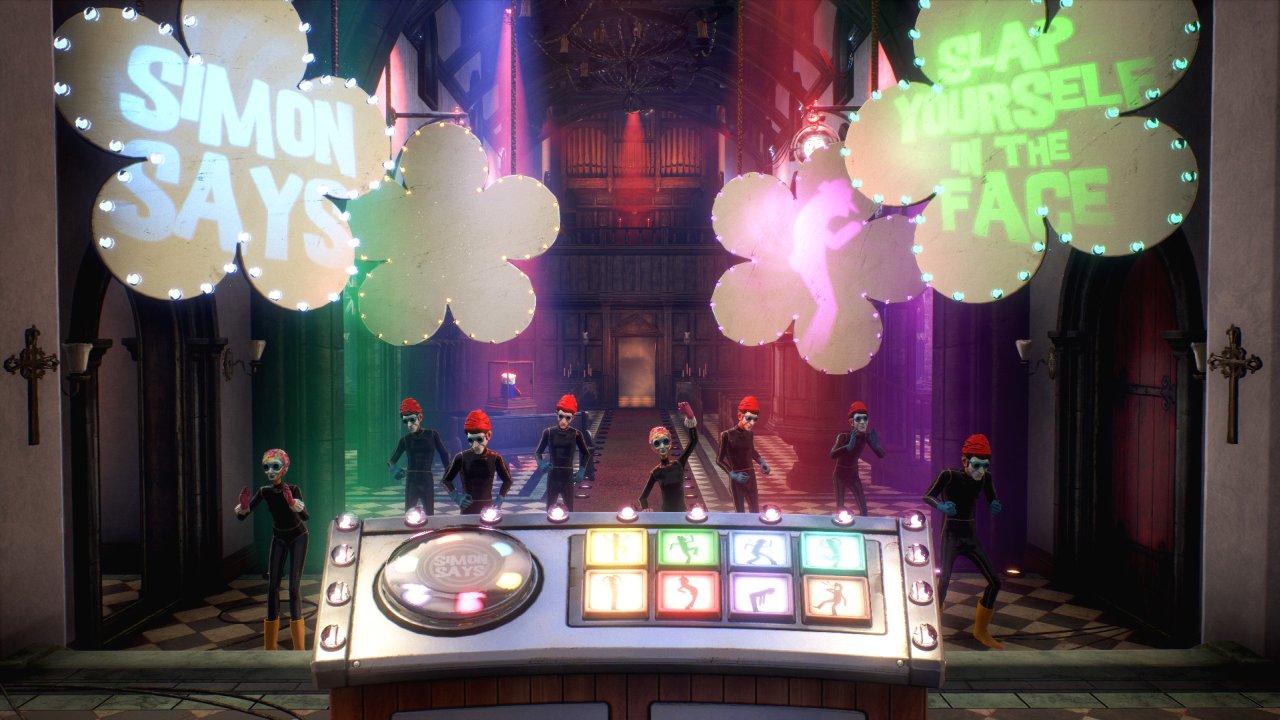 The game has sat stewing in Early Access for over two years, and the developers have been using that time to tweak bugs and gather input from the fan community. This makes it all the more surprising that the end result is as flawed and mediocre as it is, though it also helps explain the strange hodgepodge of different styles. The game was initially intended as a survival roguelike with procedurally generated areas and permadeath. As development progressed and fans voiced their opinions, the project was nudged in a linear, story-heavy direction, with a more traditional AAA structure, though hints of its roguelike skeleton remain. The frustrating part is that neither of these styles seem quite fully realized or fleshed out.

We Happy Few takes on a similar mechanical feel to BioShock, with the ability to wander semi-open levels in a first person perspective and snag just about everything in sight, often by looting corpses and rummaging through the belongings of others. This mechanic is overlaid with a retro-future 60's vibe ala Fallout, and fleshed out with a 1984-meets-Brave New World dystopian premise. The game centers around the drug known as Joy, which proves a key plot device that's cleverly interwoven into the gameplay itself, as it affects how you see the world and how others react to you. Naturally, Joy is meant to brighten the mood of everyone who uses it, but it also causes people to forget a dark and violent past. This involves an alternate history in which Germany won WWII and has demanded English children be shipped off to fight for them. The Joy is imposed upon the people of Wellington Wells, a fictional island off the coast of England, which is overseen - or rather terrorized - by baton-wielding Bobbys who'll pounce on you like rabid dogs if they catch you off this pill.

This town is where our three protagonists reside - a journalist censor named Arthur, a chemist named Sally, and the wise-cracking ex-General, Ollie. Our heroes, through various motives, seek to escape this dysfunctional dystopia as they refuse to stay on their Joy, which makes them prime targets. The story consists of 3 acts, of which you assume the role of a different hero for each. First comes Arthur, who is sort of a Jack-of-all-trades, while the physically weaker, more nimble Sallie can concoct medications and biological weaponry. Finally, Ollie is slow and clunky brute, who excels in mechanical crafting and packs a more offensive punch. Throughout their journeys they must fight, sneak, and weasel their way through doped-up city dwellers, as well as Joyless outsiders branded “Downers”.

These characters prove memorable, amusing, and distinct, thanks in part to some excellent voice acting and amusing dialogue exchanges throughout. I especially got a kick out of Ollie, who embodies a sort of R-rated, human version of Shrek. It's too bad there wasn't more care put into the NPC characters, most of whom are pretty wooden, chirp the same bits of dialogue, and oddly encompass only a handful of the same character models dressed up slightly differently. 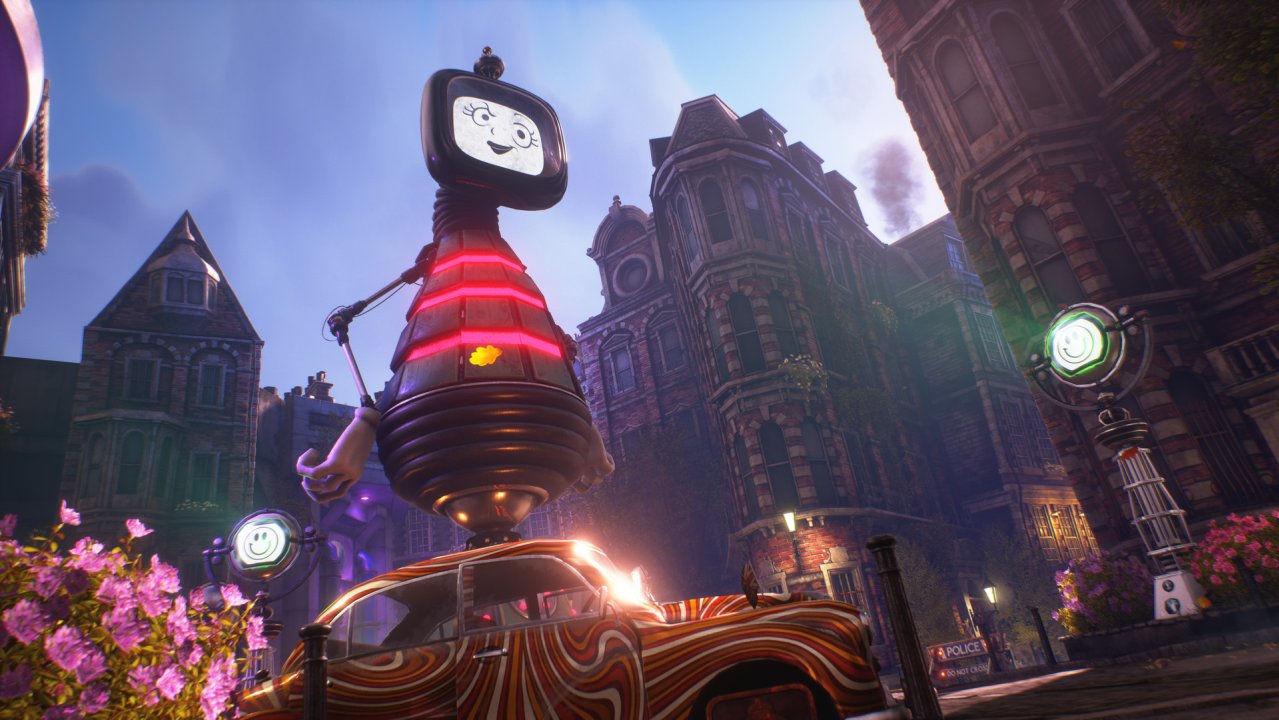 The aesthetic left quite an impression on me as well, as the game brilliantly juxtaposes the toxic and glum wastelands of the Garden District, with an almost comically cheery, vibrant city of Hamlyn when tripping on Joy. The streets are illuminated with colors, the music turns upbeat, rainbows paint the sky, and your hero even walks with an exaggeratedly bouncy and cheerful stride in his step when flying high on the drug. Sure, from a sheer polygonal perspective, the graphics take on a somewhat muddled and dated look, but the overall art style and atmosphere is fantastically portrayed. The game contains a truly eerie aura throughout - especially when off your Joy and witnessing the dark and frightening world for what it is, or when being chased by mask-wearing villagers as they chuckle creepily.

Upon entering the gloomy land of Wellington Wells, you'll notice a number of conditions which should be monitored to maximize your effectiveness, including your hunger, thirst, Joy levels, and fatigue. You'll also have to deal with food poisoning, bleeding out, and Joy withdrawal/overdose. You'll need to gather Joy pills or else pay annoyingly frequent visits to Joy Booths to get doses of blissful ignorance. These survival elements were prominent in the early builds, though most tend to feel like afterthoughts as they're no longer mandatory for survival, and merely disrupt the gameplay rather than add to the tension. Thankfully, you can opt for an easy mode which turns most of these survival conditions off if you don't want to constantly worry about finding non-toxic snacks to eat. You can also punish yourself with a hard mode that retains more of the gritty, roguelike elements like permadeath and perishing by lack of nourishment, but God knows why you'd want to.

One key aspect of the survival gameplay that is still heavily emphasized is crafting, either in the menu or at various crafting stations. You'll often need to tediously scour every nook and cranny of certain areas, along with gathering plants in the Garden District for essential healing items to stand a fighting chance. You can craft clothing, along with mostly melee weapons to fight with, such as hammer pipes and electric batons. You can grab makeshift weapons on the fly like a shovel or frying pan as well. Many of the game's quests demand at least basic lockpicks, jimmy bars, and/or electric cells to meddle your way through locks, traps, and steampunk-esque gadgets which must be powered up or hacked. These scavenger hunts and puzzles can be a pain as is, but throw several hostile Bobbys into the mix, and it can get maddening. 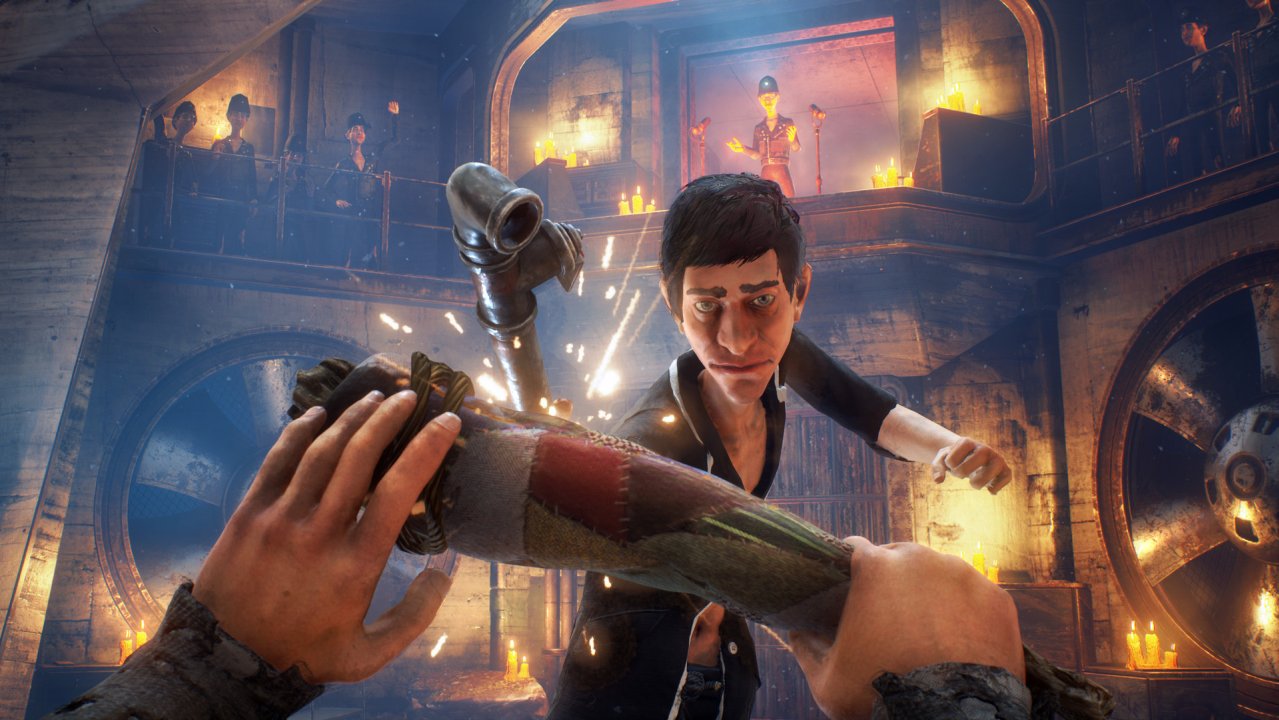 Combat is pretty bland, clunky, and archaic, which is a shame as you'll likely need to resort to it frequently. It can be mildly amusing on a raw, visceral level, but its mindless button mashing mechanic lacks substance and grows tiresome. You essentially swing blunt objects (or your fists) like a madman and beat foes into submission ala Luke Skywalker at the end of Return of the Jedi. You can also block or push an opponent to gain the upper hand, or even toss a dead body at them, while minding your stamina bar. Stealth is usually preferable when possible, as it's a far quicker, cleaner, and quieter way to neutralize an enemy. You can toss bottles or stones to distract enemies, though this often proved unreliable for me. You're allowed to assign a single melee weapon to the right trigger button, and various items are mapped to the D-pad as a sort of basic hot bar. Unfortunately, cycling through these for what you need in the heat of battle is not easy.

The AI is oddly inconsistent, and often unpredictable. On the one hand, I've managed to sneak up to a guard and quietly take down his buddy 2 feet away without the man budging. In other cases, simple break-in attempts while crouching in the bushes would often alert the entire town of Hamlyn, which brought the aggro of a huge angry mob wielding blunt objects. This unwanted combat will likely occur quite a bit, and force you to inconveniently dash to safety or leap into a garbage can to painstakingly wait it out until they've forgotten about you. Apparently every last Joy user on the island is compelled to make sure you're doped-up on the stuff, because reasons. For a game that emphasizes stealth so heavily, it provides some rather shaky, watered down, and unclear stealth mechanics.

On top of this, a number of actions - or inactions - will alert NPCs and often turn them hostile, sometimes as a direct result of trying to progress in a quest. These include being seen while off your Joy, getting sick, wearing clothing that doesn't blend in, stealing, being out after curfew, or even running through the streets. In the case of Sally, you also have a baby you need to feed, and Ollie needs to regulate his blood sugar by injecting glucose. When dealing with all these factors simultaneously, We Happy Few begins to feel like the video game version of walking through a minefield. You can rely on brute force to bash your way through mobs in more secluded areas, though your opponents are often overpowering, especially in large numbers. Thus, death will likely be a common occurrence, which, coupled with some rough load times, makes it difficult to keep enough patience to stick it out. This is a shame because the plot does get more interesting as you progress.

You can choose to take on various side quests, which usually consist of simple menial tasks like seeking out a certain type of flower for a villager, or posting flyers on billboards without being detected which advertise a rebellion. While these prove even more tedious than the main quest, they do help you gain skill points, which can make you stronger, stealthier, and generally more resourceful. With the odds so stacked against you, and the sheer number of hostiles creeping about, every little bit helps. 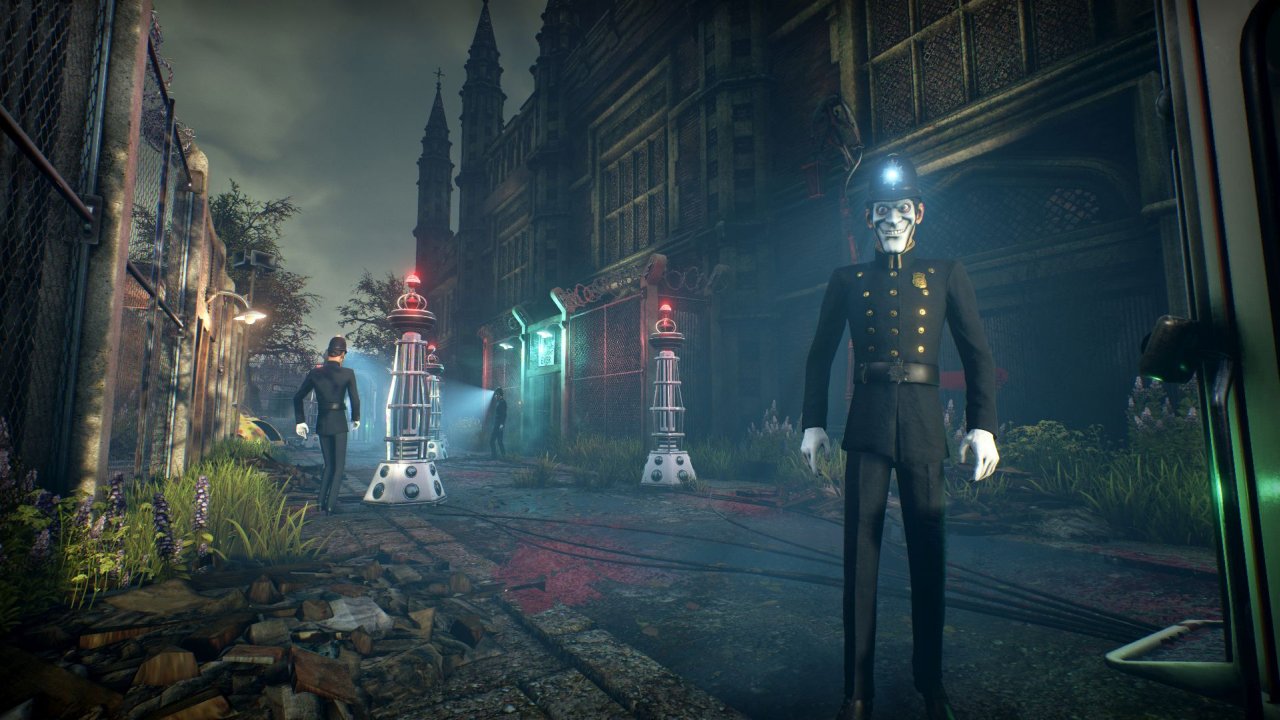 At the end of the day, while We Happy Few's deliciously dark atmosphere and premise was amusing to immerse myself in, and I appreciated its creative commentary on society, it's just not that fun to play. The game is burdened with laborious, bland quests, a lot of downtime, and throws too many overpowered, erratic baddies at you which obstruct the game's already sluggish pacing. Couple this with some dicey stealth and clunky, awkward combat, and it makes for and aggravating and bleak virtual trip.

Our ratings for We Happy Few on Xbox One out of 100 (Ratings FAQ)
Presentation
75
A uniquely unsettling sense of atmosphere, a rich art style, mood setting music, and top notch voice acting help immerse you into the experience and entice you to explore Wellington Wells.
Gameplay
50
Works off of a shaky foundation of uninspired quests, oddly behaving AI and some half-baked combat and stealth mechanics. The upgrade system never feels that impactful, and the constant item hoarding and crafting can grow tiresome.
Single Player
60
Some amusing dialogue exchanges, along with an epic dystopian premise with some neat plot twists keeps things mildly intriguing. There's a wealth of content - with the campaign clocking in at over 20 hours - though little motivation to explore much of it.
Multiplayer
NR
None
Performance
45
Lengthy load times, occasional slowdown, dead NPC bodies seizing out, cheap ragdoll physics, and a few game crashes bog things down and distract from the experience quite a bit.
Overall
59
We Happy Few contains moments of enjoyment and artistic brilliance, but they are short lived, and - like a Joy withdrawal - the eventual comedown of the clunky, burdensome reality of the gameplay seeps in. A classic case of style over substance. 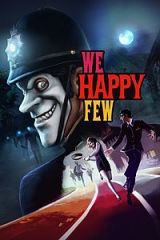 All videos for We Happy Few (3)
Advertisement ▼