A squirmy, but fun take on the classic platformer

As gaming continues to evolve and innovate, even the oldest genres are finding new ways to branch out. The platformer has been around for decades, but thanks to titles such as Celeste and Inside, the once stale genre has continued to thrive on current-gen consoles. Sometimes, though, I just find myself in the mood for something that harkens back to days of old. Enter Slime-san: Superslime Edition, which boils down the genre to its core mechanics, while also coating the whole experience in retro paint. 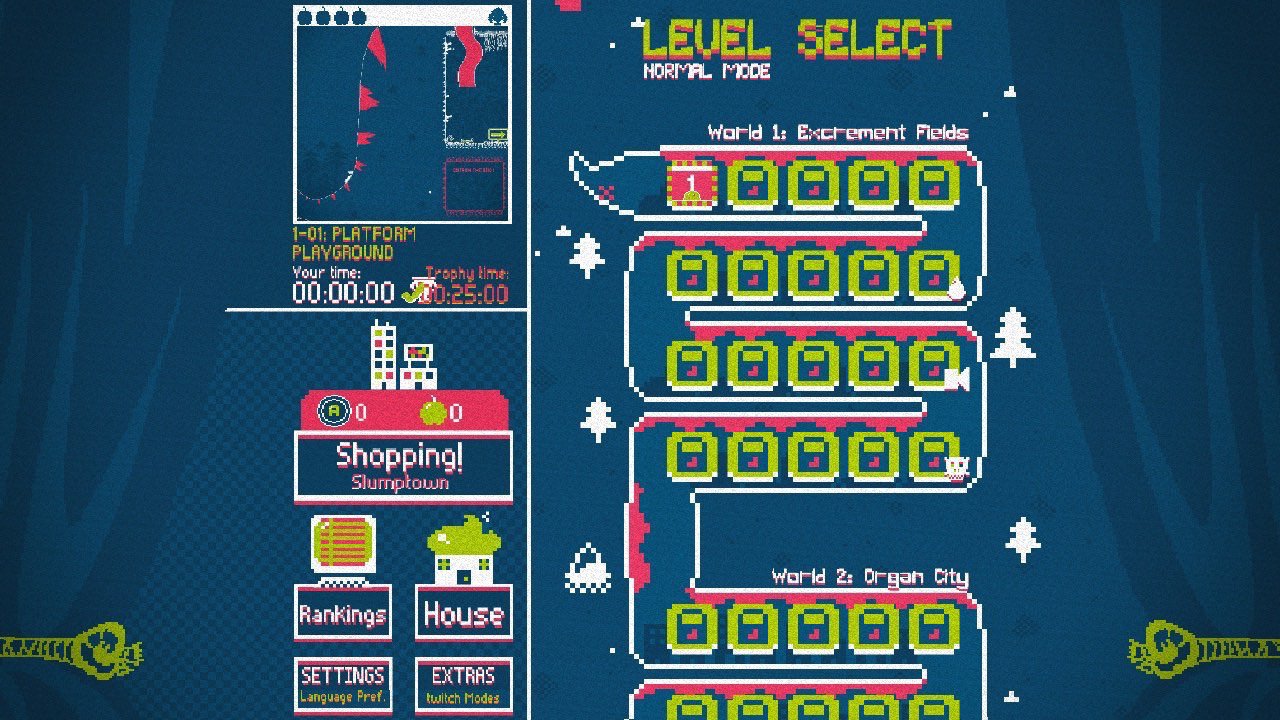 In Slime-san, you play as the titular blob of green slime. After being swallowed up by a giant worm, in what I’m sure is a common occurrence, this disgusting lump must figure out how to escape from his equally nasty situation. Unfortunately for him, the only way out appears to be through a series of increasingly difficult levels. Luckily, our oozing friend can jump, dash, climb and secrete his way through almost any obstacle the belly of a gigantic worm can throw in his path.

Besides the constant threat of being engulfed in stomach acid, Slime-san must also avoid anything that happens to be colored red. There are three main colors that are used to great effect by the game. As mentioned, red signifies danger; white is used to designate regular surfaces, and anything colored green can be interacted with in a special way. Sometimes it’s a piece of the floor that can be phased through, other times it’s a turtle that can launch you into the sky. For the color-blind gamers out there, there are options in place to make it easier to notice the differences, which is always a welcome touch to see in a game. Keeping track of all of this is crucial to survival, as one errant mistake will quickly end your run.

As has been the case for many platformers before it, Slime-san can be brutally tough. With the limited amount of time you are afforded in each level, quickly figuring out what to do is paramount. Unfortunately, the game moves at such a fast pace that you’ll typically end up dying at least once before you even understand where to go. Thankfully, the controls are intuitive enough so that any mistake you make, of which there will be many, cannot really be placed upon the game itself screwing up. The type of relentless difficulty here is clearly not for everyone, and it would be easy to shelve it after any particular rough batch of levels. Those that flocked to previously tough examples of the genre such as Super Meat Boy or VVVVVV will feel at home with the challenge here, though.

What helps offset the uncompromising brutality of the title, though, is the sheer amount of variety produced by Fabraz. With hundreds of levels split across four different campaigns, even an aficionado of the genre could find the latter parts of Superslime Edition to be stale. To circumvent this, the game continually switches up what mechanics are going to be used. Some are as easy as movement-jamming water, while others, such as shrink and growth rays, fundamentally alter how you would approach a level. And considering how short most of these levels are, if one segment focuses on a skill you despise, you’re not necessarily stuck with it for the long haul. 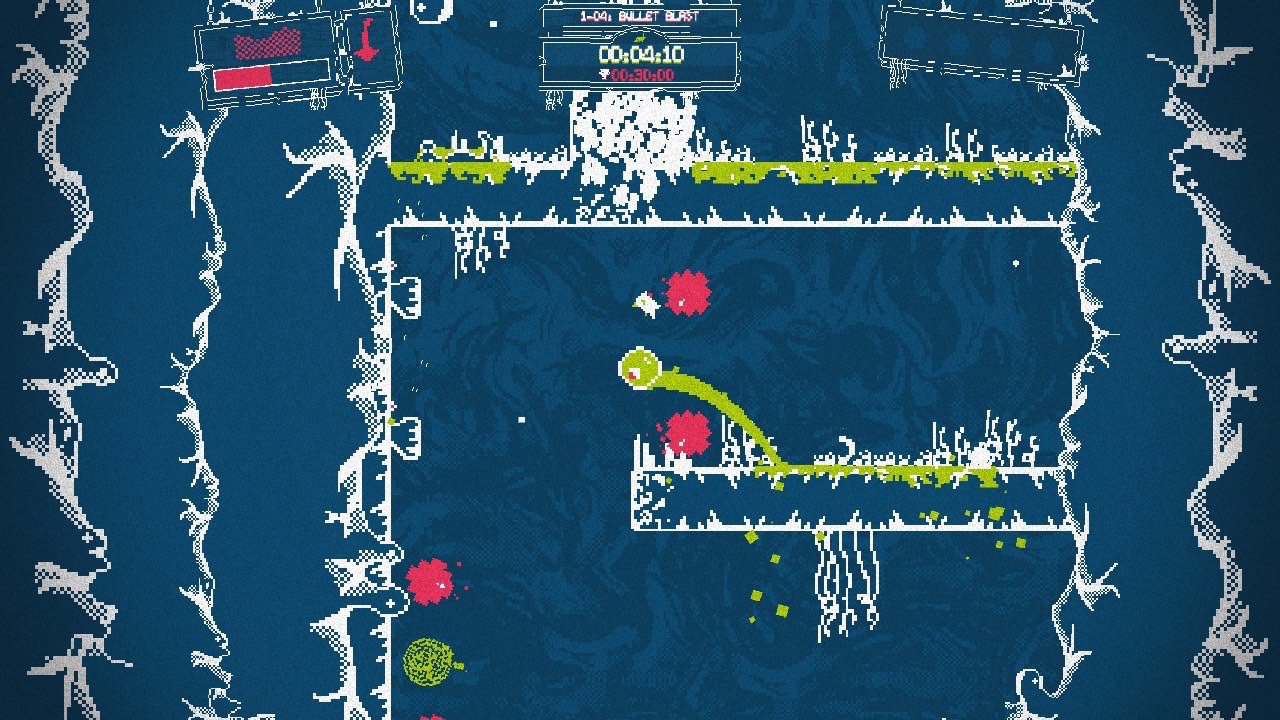 There are positives and negatives to this shotgun approach, however. On the one hand, the variety always keeps things interesting and, again, you’re rarely stuck dealing with one mechanic for a longer than anticipated period. On the other hand, though, when you do run into a particularly frustrating segment, it can really drag the fun down. If you’re like me, this will lead to some regrettable outbursts of swearing. There are far worse problems for a game to have, but the way a good run can be bogged down by a nasty stretch of levels is a slight point of contention for me.

While escaping the nasty innards is your main goal, there are other things to be done in Slime-san. Each level typically includes at least one apple for you to collect. As optional collectibles, these pieces of fruit are located in hard to reach locations, but they do have a purpose. The worm you are in is so big that it features a full-fledged downtown area, Slumptown, for you to shop around in. Finding secret hide-outs in levels will additionally lead to other NPCs showing up in town, so it’s important to be on the look-out when you can be.

Slumptown holds many different wares for you to purchase, with some of them having a tangible gameplay effect. The most expensive purchases are confined to new characters to play as. All of them related to Slime-san in some way, these new glops of slime each have their own unique attributes. One has infinite dash, but can’t use it to move upwards, while another moves faster, but is always stuck at that speed. Much like the constantly changing levels, these new characters add a new wrinkle to the gameplay. In less important purchases, you can also outfit your chosen slime with a variety of cosmetic items. My slime has a swanky eyepatch, but if you’re more of a hat person, there are certainly options for you.

I’m not as high on the retro-inspired visuals of Slime-san as others may be. Taking inspiration from the ZX Spectrum, the style of the game can be charmingly classic. The simple color palette adds to the lo-fi aesthetic. Normally, I don’t mind this approach, and there are even instances where I really love how the title looks. There’s a personality to the world inside the worm that I wasn’t expecting. However, I found it hard to play the game for too long because looking at it was a strain on the eyes. Even after adjusting the visuals to be more accommodating, I still found it hard to focus consistently. The small size of the screen can also make it hard to see hazards in certain sections, which only adds to the at-times frustrating challenge of the game. You can also purchase new filters in Slumptown, but these optional looks are even more garish and off-putting than the main game. I can see the style of this game really working for some folks, but it’s just not for me. 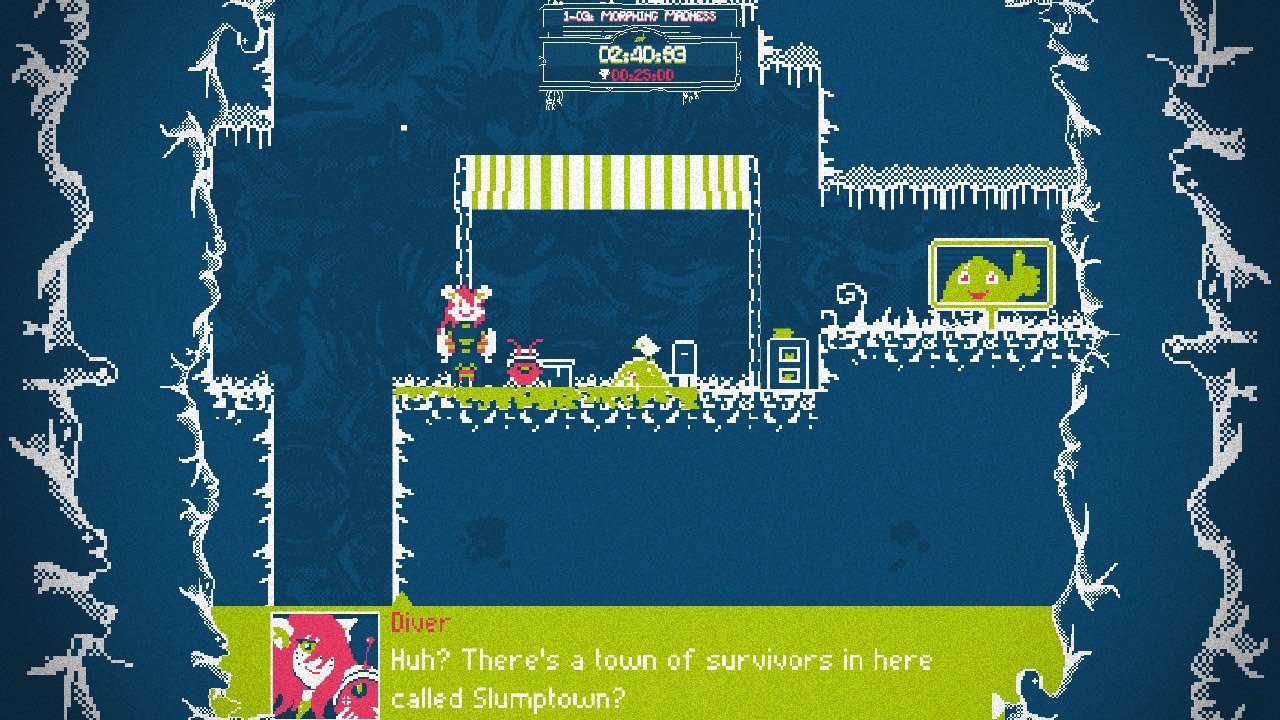 Although the grimy look of Slime-san: Superslime Edition may be difficult for me to look past, it’s hard to deny the quality of Fabraz’s packed platformer. The gameplay is tight and snappy, with little in the way to blame when you inevitably fail. And the sheer amount of content crammed into this iteration of the game is impossible to ignore. From the hundreds of standard levels and New Game+ mode to the optional mini-games and boss rush challenge, there is hours upon hours of content here. The platforming genre may be moving in new and unexpected directions, but a trip to the past is not an unwelcome way to spend some time.

Our ratings for Slime-san on Xbox One out of 100 (Ratings FAQ)
Presentation
60
The ZX Spectrum style visuals have their charm, but the off-putting look of the game can be a little hard to bear at times. The chip-tune soundtrack can get a little repetitive, but it’s solid listening for the most part.
Gameplay
78
Slime-san doesn’t try to do anything new, but the way it constantly switches things up deserves to be praised. The controls are tight as well, which makes the challenge of the game slightly easier to deal with.
Single Player
80
There may not be a real plot for you to follow, but the amount of content included is staggering. It’s easy to lose hours of time to the game just from trying to smash your previous high scores.
Multiplayer
70
Local multi-player is confined to the unlockable mini-games of Slime-san only. These optional modes, which include variations on DOOM and Mario Kart, are fun enough, but won’t hold your attention for too long.
Performance
80
Considering the lo-fi look of the game, it would be strange if it ran poorly. Mostly everything runs smoothly here, although there does appear to be some lag on the main title screen, which is odd.
Overall
74
Slime-san: Superslime Edition doesn’t reinvent the wheel, but it is one of the better variations of the classic platformer out there. The controls are excellent, and the plethora of content here will keep you busy for months. And if your eyes aren’t broken like mine, you might even appreciate the visuals.