A brief, but delightful adventure that can't quite stick the landing

If you were to take a glance at Owlboy with fresh eyes, you would probably be surprised at how long the title took to create. It took developer D-Pad Studio almost a decade to craft the colorful and whimsical adventure. To put that in perspective, that’s on par with the extended development cycle of The Last Guardian and longer than the completely rebooted Team Fortress 2. The rough time game director Simon Stafsnes Andersen went through in order to deliver his vision though is testament to the fact that just because something may take a while to arrive, that doesn’t mean it’s going to be bad. A labor of love such as this was deserving of the time it needed, even if it could have killed the studio behind it. 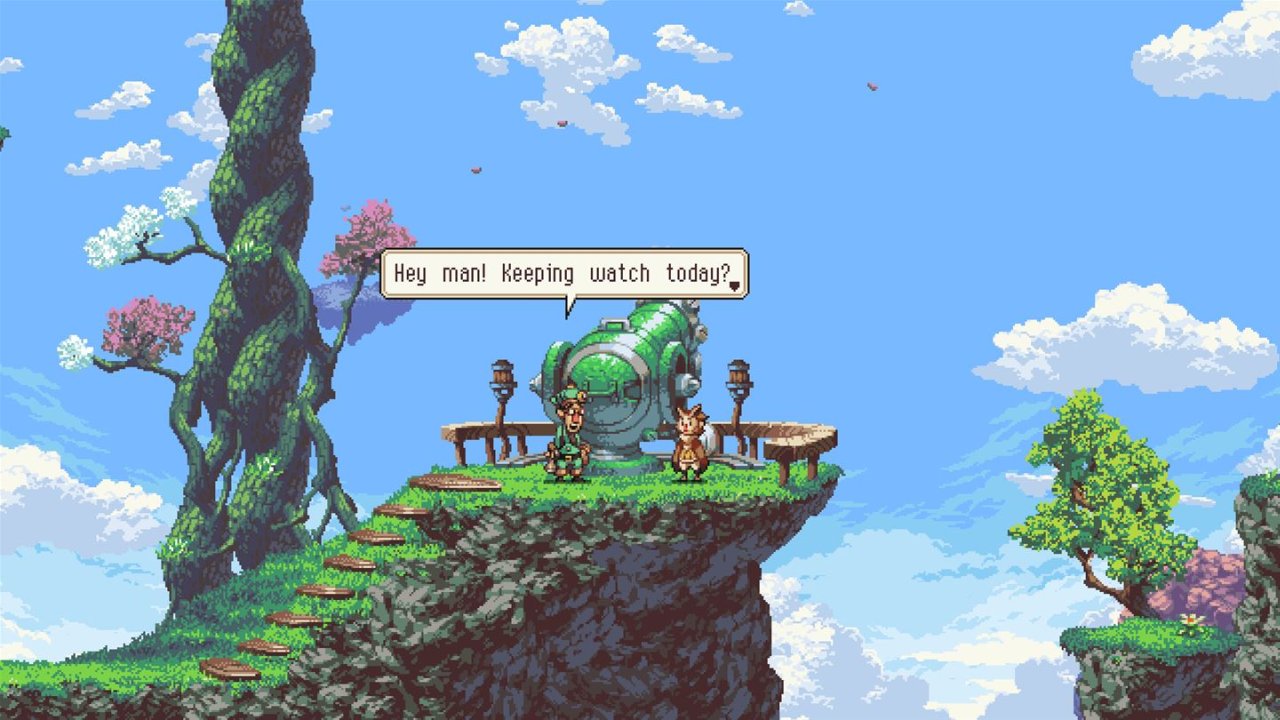 In a world high in the sky, Owlboy centers around a peculiar boy by the name of Otus. Born a mute, Otus is a member of the hybrid race known as Owls that have taken up post protecting the cluster of islands that citizens reside on. Unfortunately, despite his willingness to help, Otus has trouble preventing himself from messing up, much to the chagrin of his mentor. However, after a band of pirates begins to attack his home, it will be up to the unlikely protector, as well as some surprising allies, to save the day from utter destruction.

I’m not sure what I was expecting going into this, but I was pleasantly surprised at how much the story intrigued me. For starters, Otus is an incredibly sympathetic character, and I felt bad every time something didn’t work out in his favor. The more and more he tried to save the people he cared about, the more I rooted for him. While not as personable as Otus, the supporting cast of the game are also quite entertaining. From Otus’ friend Geddy to a chaotic bug-creature that is causing mischief, the other characters were always great to check back in with. The one issue I have with the story is that I wish the ending provided a little more closure. You get a solid idea of what’s going on with Otus, but everyone else is largely brushed aside. It may not be their tale, but after spending a few hours getting to know them, a brief follow-up would have been appreciated.

With an over-arching hub, you would be forgiven for thinking that Owlboy was more Metroidvania than traditional platformer. Looks can be deceiving, though, as the game is more linear than it appears. This linearity is not a bad thing, though, as it leads to a tight, always engaging adventure. Otus will traverse a handful of different locations on his quest, from an ancient Owl temple to the inside of a massive pirate ship. While you don’t have to backtrack during at any point during the game, collecting the many coins found in each of these levels becomes important. Besides giving you a sense of satisfaction, these coins can be used to purchase upgrades and cosmetics for our hero. Items such as the pirate hat may provide little use, but health and weapon upgrades give a helping hand. 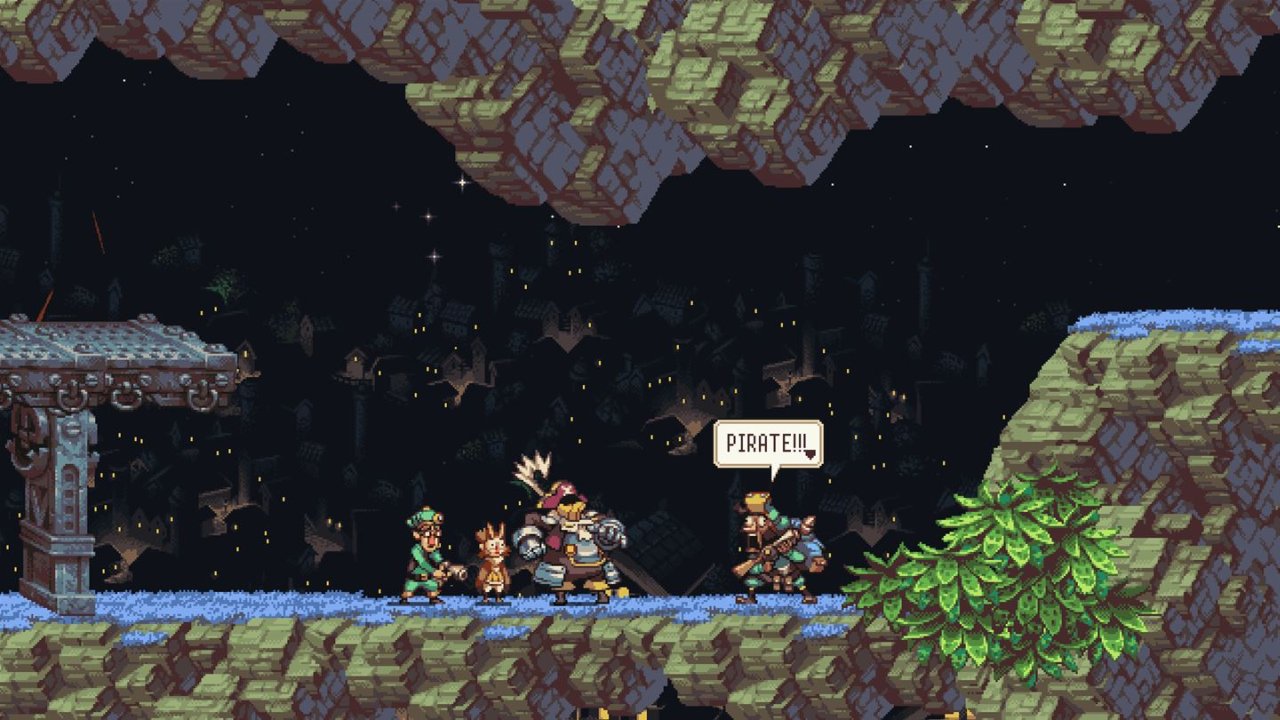 By and large, Owlboy is a delight to play. Otus’ perpetual flight allows for fluid movement. He can gracefully flutter around enemies, or in a few unwelcome sections, fly into cover. Even in such intense moments, the controls always handled smoothly and accurately. Same goes for the times when Otus has to swap between allies. While he may have dynamic agility, Otus is not particularly well-versed in combat. As such, he’ll need to constantly be carrying around one of his three friends in order to help out. Each one has their own unique trait, and there are sections where you’ll have to rapidly swap between them. Thanks to a device you acquire early in the game, though, you can quickly cycle between all three with just the press of a button. It’s a streamlined approach, and one that thankfully alleviates the concern of having to drag around unnecessary weight.

Owlboy isn’t particularly long, with my run clocking in at around 4 hours, which makes it so much more disappointing that the game doesn’t stick the landing. After getting progressively more challenging and interesting, the final quarter is a confusing dud. For starters, it ditches most of the mechanics that made the previous levels so enjoyable. It’s a clumsy and awkward platforming section that feels out of place with what the game was serving up beforehand. Then, it devolves into an unsatisfying final boss fight that is built off a twist that doesn’t work in the way it needed to. In a game as short as this one is, an uninspired and lackluster conclusion really sullies the experience.

While the length of the game may be a surprise considering the long development cycle, the visuals are a good reminder of just how much time and effort was put into Owlboy. To call it simply gorgeous would be unfair to just how beautiful the 2D art looks. It’s among the best pixel art I can remember seeing, from both a technical and artistic standpoint. The levels are bursting with detail and feature stunning artwork, and the enemy designs are just as memorable. What really elevates the look of the game, though, is just how full of personality it is. Considering Otus cannot speak, D-Pad Studio had to successfully convey his emotions via his expressions. They not only pull that off for him, but for also every other main character you come across. 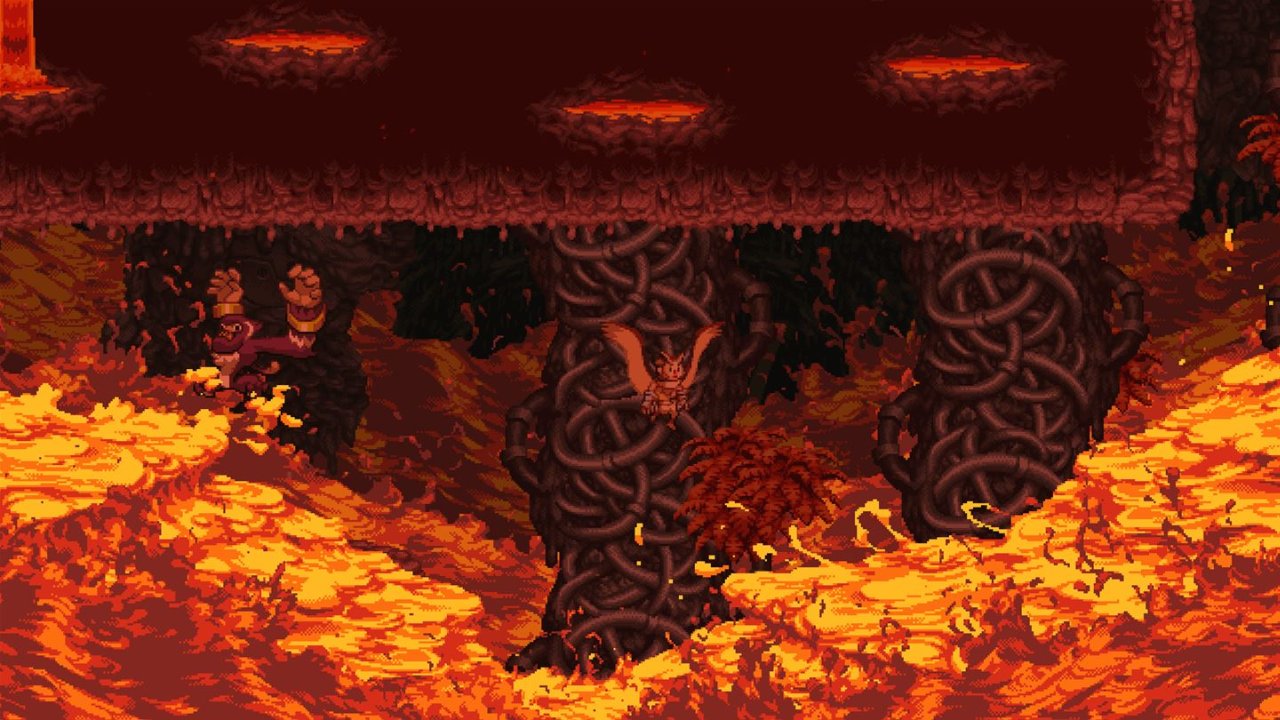 The excellent soundtrack is equally adept at giving the title a unique personality. Composed by Jonathan Geer, the accompanying score expertly fits whatever the tone the game may be trying to reach at the time. From the pumping theme that backs Otus’ first encounter with the Pirates to the haunting tune that sits in the background during the somber later sections, the music played a large role in getting me invested with the game.

For as brief as it may be, Owlboy is a mostly delightful adventure. The gameplay is rock solid, with excellent controls making Otus and company a pleasure to explore with. The vibrant visuals and ear-pleasing music give the game the unique identity it needs to truly stand out among the many other 2D platformers out there. However, the tight narrative also gives way to an unsatisfying final section that throws out the charming gameplay that made the rest of the adventure a treat to play. For something as short as this is, it may not be the end of the world, but it leaves a disappointing final impression.

Our ratings for Owlboy on Xbox One out of 100 (Ratings FAQ)
Presentation
85
The colorful and personable 2D graphics of Owlboy give the title a dazzling presentation. The memorable soundtrack is almost as great, and is adept at creating the perfect mood.
Gameplay
80
While the forced stealth sections the game throws at you aren’t great, the fluid and dynamic controls are good enough to compensate.
Single Player
70
The story pulls on the heartstrings, and Otus and friends are wonderful to follow around. A weak villain twist, and a disappointing conclusion leave an unfavorable impression by the end, however.
Multiplayer
NR
None
Performance
90
Owlboy runs with no issues on the base Xbox One.
Overall
80
Despite an unsatisfying final act, Owlboy is an enchanting and dazzling adventure. The heartfelt tale will tug at your heartstrings, while the solid gameplay will make you want to see Otus' journey to its conclusion. 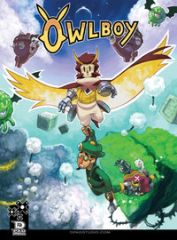