THE AQUATIC ADVENTURE OF THE LAST HUMAN
Platform: Xbox One
74
SummaryNewsArticlesVideoScreens

The Aquatic Adventure of the Last Human Review

Humanity may be doomed, but the water is just fine

When it comes to the idea of water-themed levels in video games, I imagine that the general public remains split on them. Some appreciate the majestic underwater exploration these sections feature, while others may take issue with their floaty, sometimes clumsy nature. So, for developers out there, the key to success for these levels comes down to keeping their awe-inspiring beauty intact, but also being able to make them enjoyable to play. It’s a tough balance to strike, but the team over at YCJY are giving it their best shot with The Aquatic Adventure of the Last Human. 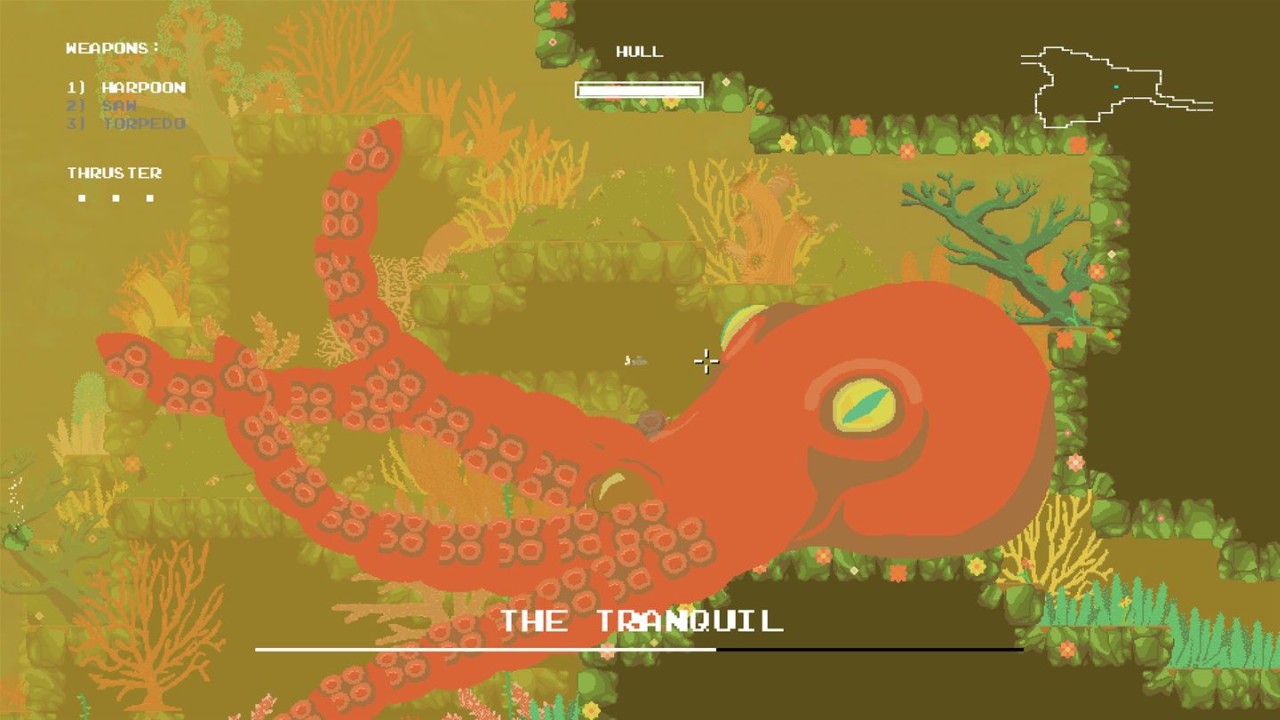 In the year 2971, Earth has crumbled into an underwater dystopia. The human race has had to retreat to the bottom of the sea due to the damage they have caused to the planet’s climate. In order to seek out a new home for the species, a series of ships is sent through a worm hole to find a habitable planet. When one of the ships, Argo9, returns after a thousand years, the already dwindling human population has been wiped out. With nowhere else to really go, the crew of this single ship must now investigate this beautiful, but dangerous, aquatic world in order to figure out what exactly caused the human race to wipe itself out.

Like any good mystery, you really need to dig deep in order to understand the cause of the destruction of the planet. Hidden throughout game are holo-messages that provide important backing detail on the various groups and settlements that had sprung up once humanity settled under the sea. Obviously, there are parallels to be made between Earth 2971 and Earth 2018, specifically the looming threat of global warming. And while that story thread helped draw me in, I grew to appreciate the dark timeline YCJY crafted for the game. You’re not trying to save humanity, as they have already doomed themselves. You’re just trying to survive a world that feels both familiar and alien, and that’s what compelled me to stick with it.

When you first take control of the Argo9 in The Aquatic Adventure of the Last Human, the game has the feel of a Metroidvania. You have a big map to explore, with several sections walled off by obstacles (vines, rocks) that you don’t have the tools to deal with yet. So, in typical fashion for the genre, you’re going to have to acquire a few items before you can fully explore the sea. The first major upgrade you get, a harpoon cannon, comes in handy almost immediately as a massive sea worm soon has its sights on gobbling you up. Even after you eliminate that pest, the terrors of the ocean only grow bigger and more horrifying the deeper you go. 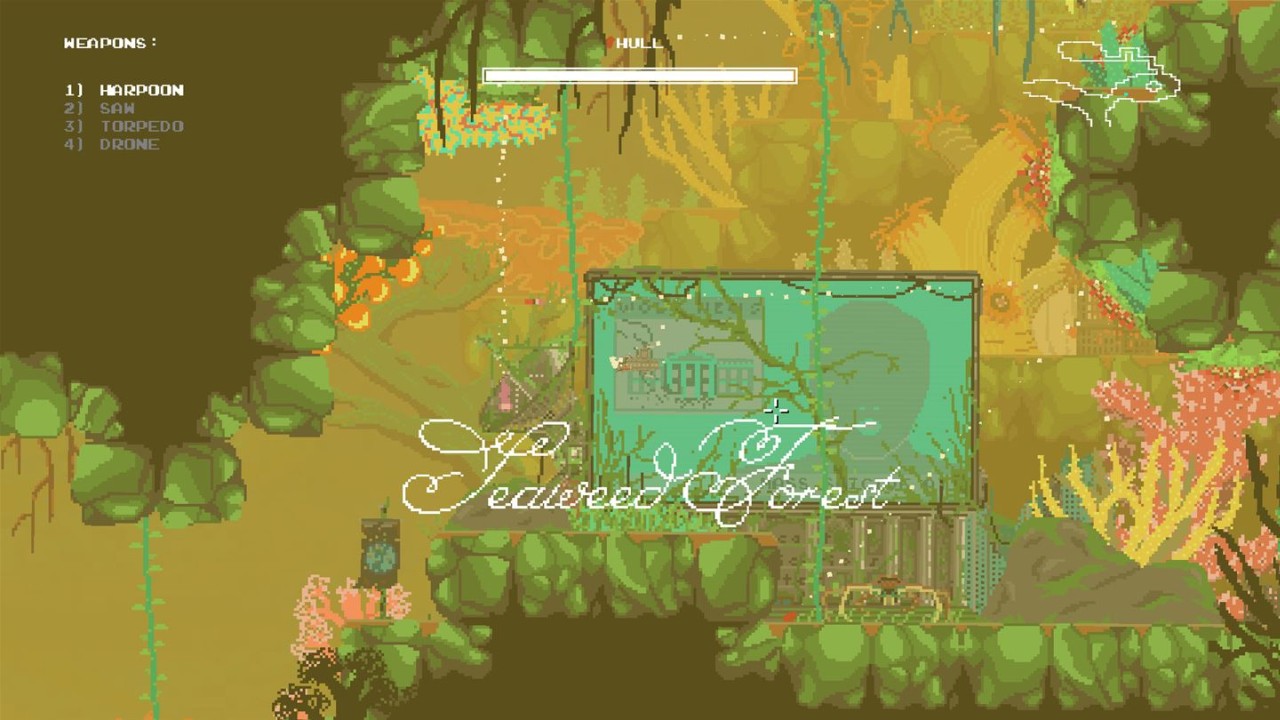 Although the game carries the look of a Metroidvania, a more accurate description would be to call it a boss-rush style game. Outside of these battles, there’s not a lot of action to be found. Sure, there are missile-shooting clams and dangerous clouds of gas, but those are going to be happening whether the Argo9 was in the area or not. So, a vast majority of the game occurs during the battles between your craft and the titanic creatures of the sea. Thankfully, these encounters are not only unique, but also enjoyable to take on. One battle has you systematically dissecting an over-sized octopus, while another has you desperately trying to outrun a giant crustacean. Each of these showdowns manages to feel completely different from the other, which is a rare and welcome occurrence.

While the boss battles would eventually leave a memorable impression, during them, I found myself frequently frustrated by the combat engine. Especially during the early portions of the game, the Argo9 doesn’t have the health or speed to really handle the damage each massive creature can cause. Although this does lead to some tense moments, the frustration that comes out of being hit once or twice, dying, and then having to repeat the whole process over again was a tough barrier to overcome. As you progress through the game, it becomes easier to deal with these annoyances, but during the early portions of the game, the harsh difficulty can feel a little overwhelming.

The Aquatic Adventure of the Last Human is a game with a mystery to unwrap, so it makes sense that things can be a little obscured at times. However, I do think there could have been some refinements put into place in order to streamline the exploration segments. For starters, a better in-game map would have been greatly appreciated. The map you do get does have some landmarks, such as previously discovered boss locations and save points. However, with how off the beaten path some items are, such as the spotlight upgrade, a little more detail would have been helpful. Additionally, some type of indicator as to where you should potentially go next isn’t the worst idea. I understand that an air of mystery is crucial to the game’s experience, but sometimes I just kind of like knowing where and when my journey will be taking me. 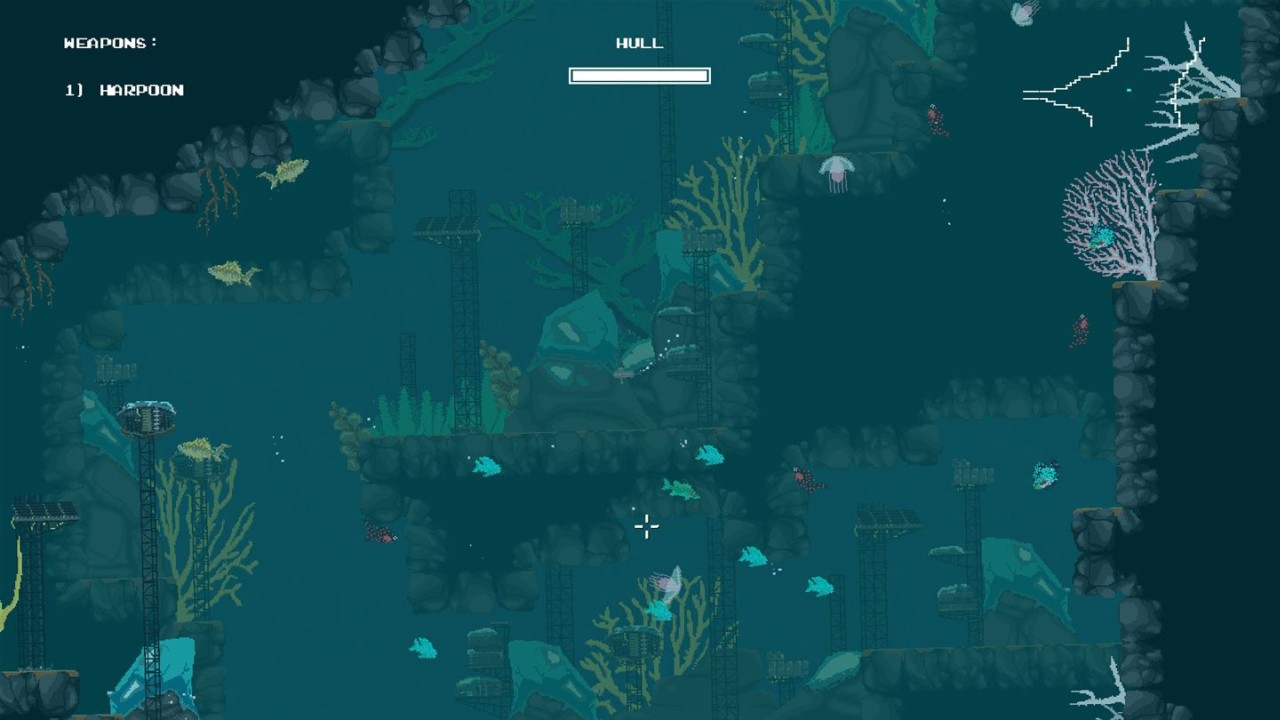 With the entirety of the game taking place underwater, YCJY had to work to make the world of The Aquatic Adventure of the Last Human stand out visually. There are plenty of eye catching sights in the ocean, but if every section of the game carried the same style, that would be a tad dull. Thankfully, the team was able to utilize colors and architecture to give each different area of the game its own unique feel and personality. From the neon-yellow Seaweed Forrest to the murky, disgusting Pipe Central, the undersea world always manages to keep your attention. One of the other neat visual tricks the studio uses is selectively pulling the camera back, which really reiterates just how small your ship is in comparison to the world around you. It’s a wonderful scaling trick, especially when it is used during the boss battle sections. My only qualm with the visuals is that it can be easy to lose track of not only your ship, but also enemy attacks, due to either the color scheme in use or environmental objects that sometimes obtrusively pop up in the foreground.

The soothing, electronic score does a decent enough job of backing your adventure. It’s not going to win any points for originality, but it serves its purpose of properly setting the mood. There is something strange that happens with the music, though, depending on how long you sit around in one section. While the music will kick in when you enter, if you wait around too long, it kind of just stops without warning. I get that one song is not going to drag on for hours, but the fact that it doesn’t loop or switch to something else is an odd issue. I’m not sure if this is an issue specifically with the Xbox One version of the game, but it was jarring nevertheless.

Setting aside the feeling of dread the plot manages to conjure, The Aquatic Adventure of the Last Human is a solid, quirky adventure that surprised me. The large-scale boss battles constantly managed to keep me on my toes, and the unconventional look of the game gives it a personality that resembles nothing in recent memory. There are some minor issues to be found, such as the confusing lack of direction and occasional performance issue, but they are far from deal-breaking. If you’re looking for not only a Metroidvania that breaks the mold, but also something that makes you think about a real-world problem, YCJY’s undersea opus could be what you are after.

Our ratings for The Aquatic Adventure of the Last Human on Xbox One out of 100 (Ratings FAQ)
Presentation
76
The colorful, eye-catching visuals of The Aquatic Adventure of the Last Human do an excellent job of depicting the wonder the ocean has. The soundtrack can’t quite match-up, however, especially when it drops out from time to time.
Gameplay
75
For a good portion of the game, the gameplay feels a little too crushingly difficult. Over time, though, the difficulty evens out enough to make the memorable boss battles worth undertaking.
Single Player
70
While it may only clock in at around six hours, the campaign of The Aquatic Adventure of Last Human leaves a mark, both in terms of gameplay and story-telling.
Multiplayer
NR
None
Performance
68
The aforementioned music dropping is the title’s biggest issue on the Xbox One, but there are also bouts of lag that pop up due to either entry into a new area or too much action on-screen.
Overall
74
The Aquatic Adventure of the Last Human is a short, but memorable journey. Whether it’s taking down a pair of seahorses, or exploring the last remnants of humanity, the title is full of memorable setpieces that will delight, even in the face of existential horror.

The Aquatic Adventure of the Last Human 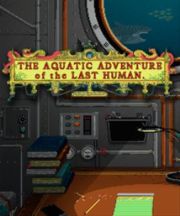