A well made adventure that will strike fear into players

Detention’s formula is an ostensibly obvious one: what if someone made an adventure game, but after each puzzle you solve, instead of a warm feeling of satisfaction you would have a terrible scare waiting for you. Yet, the debut effort of Red Candle Games is more than jump scares and puzzles. The game marries together the genres of adventure and horror with such expertise it’s easily the best melding of the two since Simogo’s thrilling mobile game, Year Walk. A mix of Asian horror sensibilities, Detention blends jump scares with an ever-building sense of dread that culminates in a strange psychological experience. Its pacing might be a little clunky, but all-in-all Detention is the scariest game I played this year. 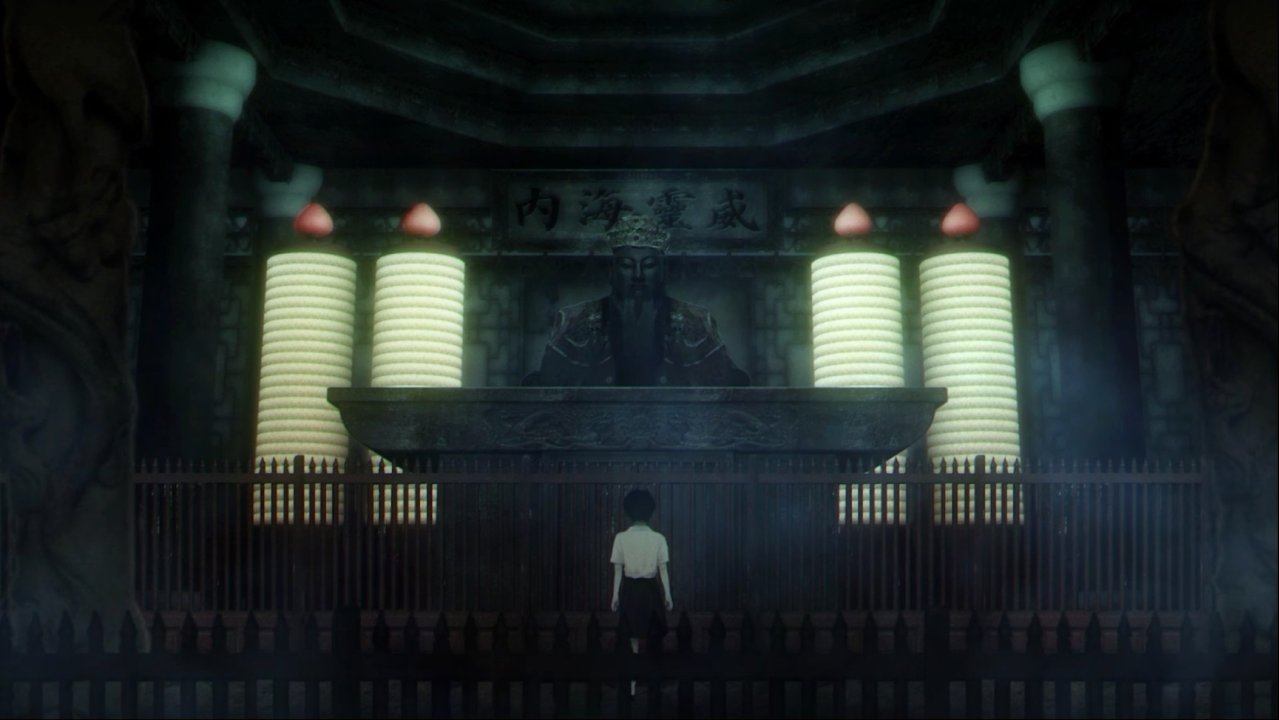 You assume the role of Wei, a student at a Taiwan school under the influence of a 1960’s dictatorship that fears the powerful influence of communist China. After falling asleep in class, Wei wakes to discover that his school is abandoned and begins to suspect that everyone has evacuated to avoid an incoming typhoon. While exploring the school he finds Ray, an older classmate. After Wei mysteriously vanishes, Ray is left to wander the school on her own, attempting to find out where everyone is and what has happened to them.

It won’t take long until you realize that clearly something supernatural is happening to Ray and it gives developer Red Candle license to use all kinds of unearthly jump scares. While the game is good at keeping you on your toes, expecting something horrible around every corner, it saves its moments of terror for the right times. The ambience of the game is surprisingly akin to Silent Hill 2, which is a comparison that I don’t use lightly. Sharing their Asian horror influence, both games build a sense of dread, creating a constant tone of suspense. You’re likely to hear the monsters lurking all around before you ever actually see them, so there’s constant tension that accompanies opening each door.

The story itself is awkwardly paced, but still interesting. It’s hard to really get into the meat and potatoes of what works and what doesn’t without spoilers, but Ray’s exploration of the school also becomes an exploration of herself as the supernatural nature of the terror begins to reflect on her, making her think on the decisions she’s made and what pressed her into those decisions. The translation isn’t always the best, sometimes causing the characters to utter one cliché too many, but a lot of major plot points are well written. Ray’s world is a manifestation of her internal conflicts, and those internal conflicts are surprisingly well-balanced. 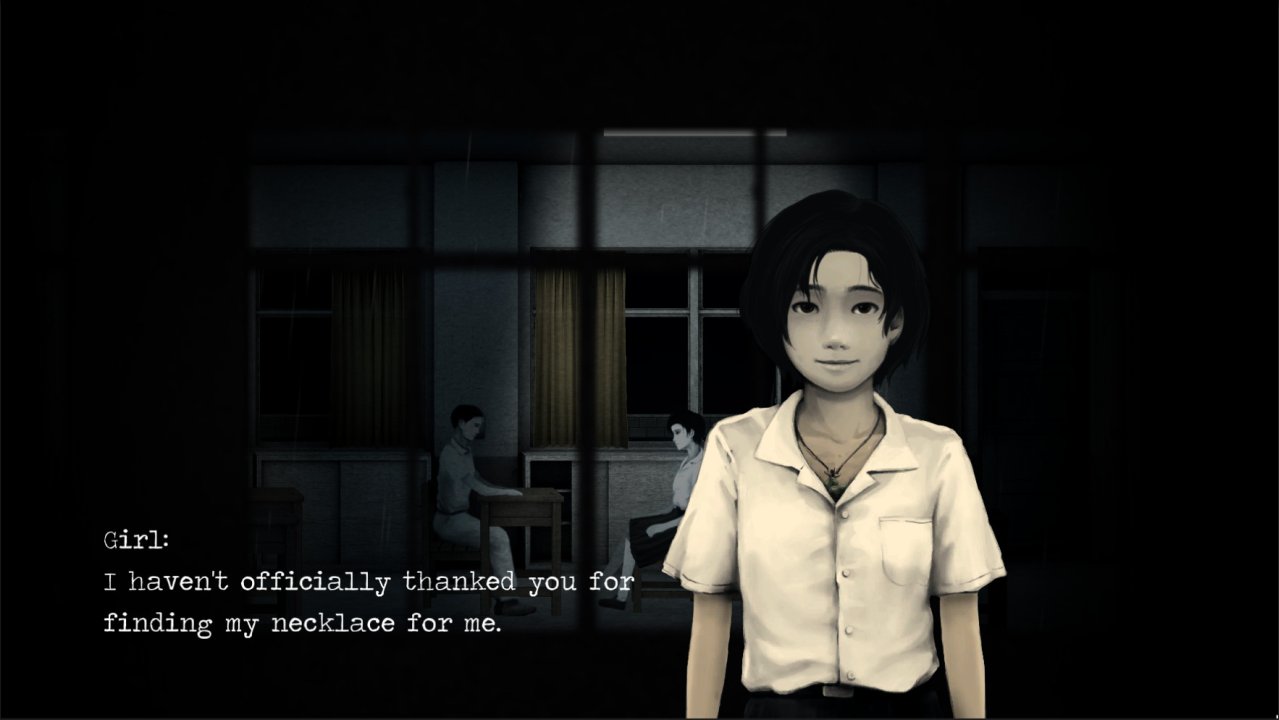 The lion’s share of Detention’s gameplay is straightforward adventure-puzzling, which means that you collect items and use those items on objects in the world to unlock rooms where you find more items and the process begins anew. The good news is that these puzzles aren’t overly obtuse, as they can be with the adventure game genre. The flow of the puzzles is closer to something like an early Resident Evil game. Detention keeps things snapping along and for a game that is trying to keep the experience fresh in order to maintain the horror, that is a good thing.

It feels surprisingly good to play Detention on the PlayStation 4. Adventure games don’t always translate well to console, but this one certainly works. Operating on a 2D plane, items are found by walking past them, instead of having to hunt for them in a 3D space with a cursor. It takes a straightforward game design and makes it even more so. Hardcore adventure fans might be put off, but if you are hesitant to play adventure games because the solutions to some puzzles are too obtuse, Detention has got your back.

The best part of the horror experience are the spiritual monsters that wander the game. In order to escape these creatures, who have the best sound design of any monster since The Last Us’ Clickers, you have to command Ray to hold her breath. Different spirits have different mechanics on how to avoid detection, and you can always use food offerings as a distraction. Largely these gameplay elements are under examined, used only a couple times before being forgotten, but they’re still interesting. 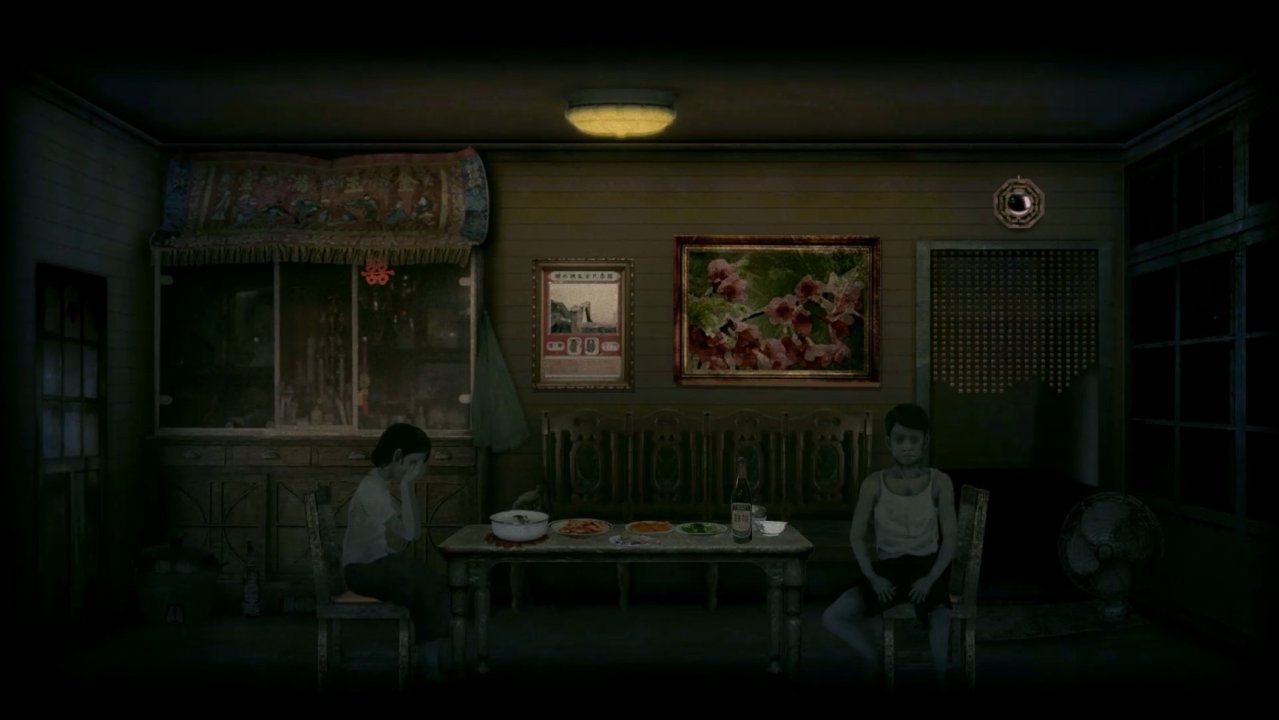 Yet, while the game isn’t long enough to explore these mechanics fully, it still feels on the long side. So let’s dig into the awkward pacing that creates this feeling. The prologue and the first two chapters move at a quicker clip, with good puzzles and smart gameplay while lacking much in the way of narrative, but the last two chapters bother less with gameplay as they quickly attempt to tie up the story threads. It all works, but it works in spite of this hurdle rather than because of it. As I settled in for the last hour of the game, which clocks in at about four hours long, I expected to get a large chunk of story in order to try and tie all the elements together and while I wasn’t disappointed, I was annoyed it all had to be rushed at the end. It almost feels like Detention is two different games smashed into one, which could have been avoided by interspersing the gameplay and narrative a little more evenly throughout.

Still, the game’s thematic examination of government oppression finds a harmonious union with the gut-wrenching horror atmosphere. The themes of control and fear are excellently explored on both a thematic and narrative level. While one naturally sympathizes with the rebellious nature of students and teachers at the school who are trying to educate others and themselves on the dangers of the dictatorship that rules over them, the rebels make choices that shade their cause in grey. Meanwhile, Ray’s personal struggles with self-worth and fear make her relationship to fellow rebels complex and difficult.

These themes carry into the aesthetic of the game, which seethes with malice and gloom. The heavy lifting of the horror motif is carried by the sound design. A droning hum is layered over every location with strange noises accenting the oppressive din. Meanwhile, the game is filled with strange and disturbing visuals that take a location as familiar as a school and drench it in imagery that is the stuff of nightmares. The characters move a little stiff, almost like paper dolls, but it keeps in line with the tone of the game - the sense that everything isn’t quite right. 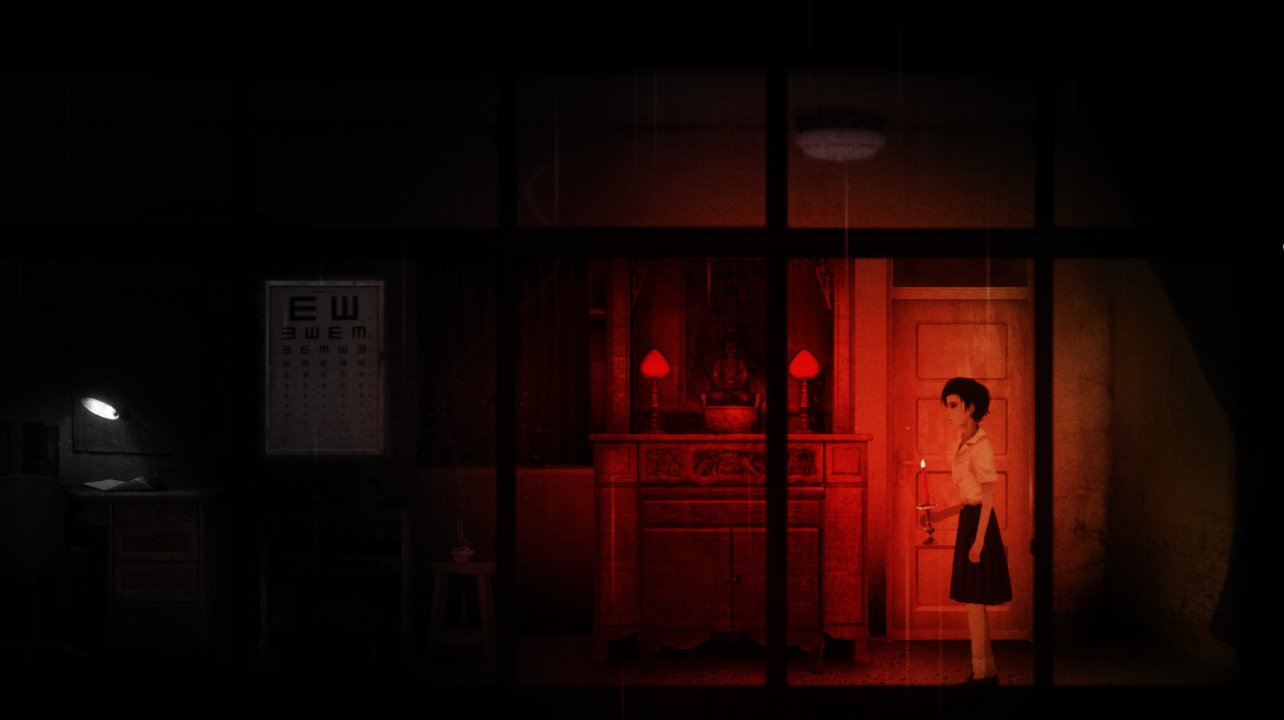 The best the moments of Detention are when Red Candle sets up a terrifying and disgusting moment that you can see coming from miles away and then lets your stomach turn as you have to go through the motions anyway. I wouldn’t dare spoil these moments for you, but there is some really gut wrenching stuff in Detention in both the terrifying world that Ray is exploring and miserable life she is trying to survive. Detention leaves you with a sick feeling that connects you to its horror - a true feat for a video game of this kind.

There some technical flaws that hold Detention back. Moving between rooms can be a little slow, but the biggest issue was a save bug I had. When I died in the game, I always was sent back to the very beginning, when the playable character changes from Wei to Ray. In order to get back to my last save point, I had to exit completely out of the game and load back in. It’s not game-breaking, but it’s annoying.

I really could go on about Detention and the subtle ways it weaves its way through thematic storytelling, psychological horror, inventive aesthetics, unsettling atmosphere, and subtle audio design. It combines into a package that is one of the scariest things I’ve played since Amnesia: The Dark Descent, and is a home-run effort of Red Candle. For those who love horror or even adventure games, you really owe it to yourself to play this game, but even if you don’t subscribe to either genre, Detention is still worth checking out. Red Candle’s international release of Detention is likely a large underdog story, as Taiwan is not seen as any sort of game design haven, but fingers crossed that a game this good can put the studio on the map, because they deserve it.

Our ratings for Detention on PlayStation 4 out of 100 (Ratings FAQ)
Presentation
95
Aurally and visually, Detention is about as good as horror games come. It might be a simple design, but it creates a tone that is impressive.
Gameplay
82
The puzzles are good, never too challenging and allow the game to move at a necessary brisk pace. The controls to avoid the spirits are good as well, creating some excellent moments of tension, though I wish they could have been explored more thoroughly.
Single Player
76
The pacing is clunky. It works well enough and I like the way the game ties it themes, narrative, and gameplay together, but it stumbles to the finish line.
Multiplayer
NR
None
Performance
67
The game isn’t very ambitious technically, but it still suffers from some long and frequent loading scenes and an annoying save bug.
Overall
83
Detention is a haunting and thrilling experience that’s worth checking out, and is one of the scariest titles I’ve played in years. Those who dig horror and adventure games are in for a real treat. 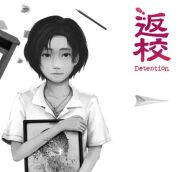 Our Review of Detention
83%
Great
The Verdict:
"A well made adventure that will strike fear into players"
Game Ranking
Detention is ranked #317 out of 1853 total reviewed games. It is ranked #18 out of 174 games reviewed in 2017.
316. Valkyria Chronicles 4
PlayStation 4
317. Detention