Cobbling and Hobbling This World Back Together

From the moment you awaken as Hob’s silent protagonist, you get a sense that the world you find yourself in isn’t the charming place its chunky, cel-shaded designs may suggest. Upon its opening, I was reminded of RiME, overlooking the tranquil remnants of a civilization now wandered by elegant hybrid creatures. Ruined as they may be, things were at least peaceful, needling my curiosity with its few, unspoken paths. I was soon punished for dawdling, as an early attack had me suddenly spotching the ground with blood as my right hand was cleaved off. And as a disquieting mechanical grumbling began to displace the natural ambience, I found myself instead amid a world on the edge of deactivation, overrun with monsters, bots and constant malfunctions. Time to get to work. 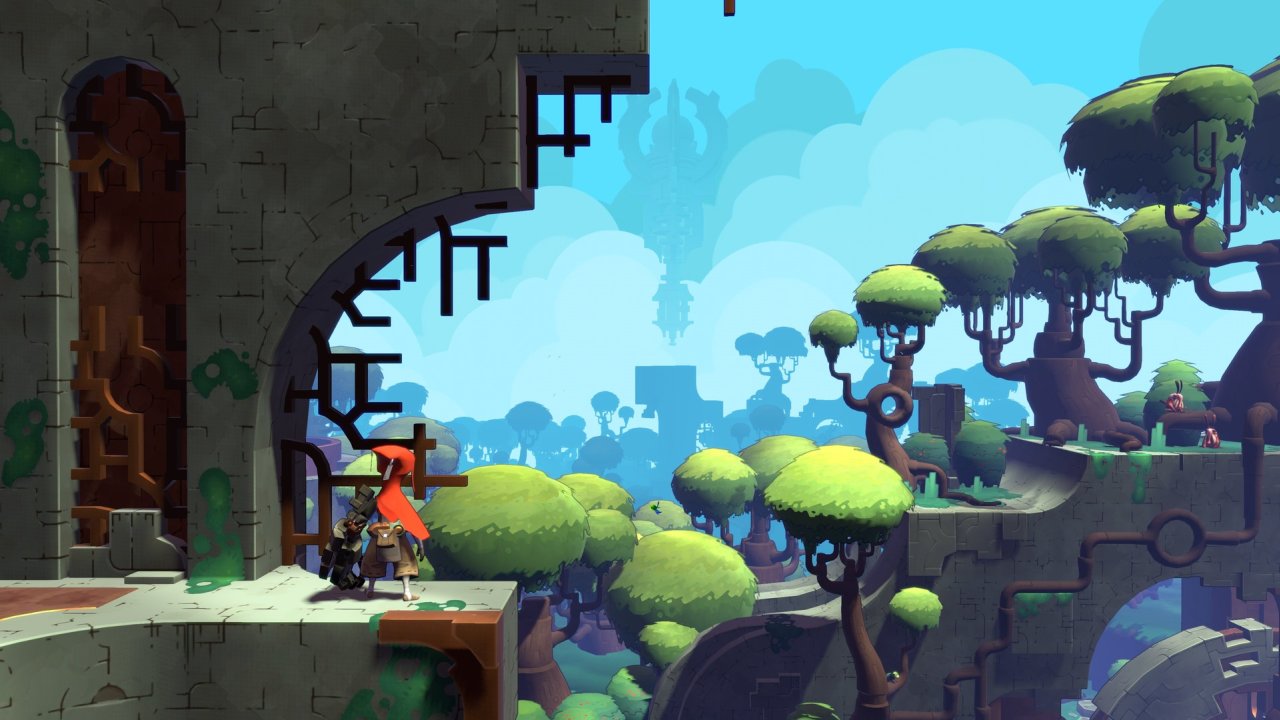 Hob’s reticent storyline reminds in some ways of RiME, with just a pinch of character inspiration drawn from Journey’s red-cloaked protagonist. There’s no dialogue to speak of, and you’re propelled into Hob’s run-down ruins without much preparatory fluff. Little is directly explained from then on, relying more on visual cues and set pieces to weave an interpretable narrative.

In other ways, it resembles Hyper Light Drifter. Albeit not quite as exuberantly-coloured, Hob’s is also a world in which nature has become fused with the robotic, with friendly faces near enough extinct. Tree trunks grow into brass pipeways, ethereal forests are scattered with neon-lit tomes, and the remnants of robot sentinels lay deactivated across the land. Meanwhile, there’s a constant mechanical wailing buried beneath the game’s minimal soundtrack that never lets you forget that this is a place under immense strain.

Yet, it must be said the likeness is only slight, for Hob’s cel-shaded techworld is more grungy comic book, than breathy watercolour painting. There’s a chunky, jagged look defining each environment, giving its hybrid beasts and mechanical monsters to pop with cool, post-apocalyptic flair. Enemies wear it particularly well - from goblin bats that attack in flocks, to club wielding ogres who charge you on sight - exploding into blocks of pixelly gore that (while undetailed enough to fit the chunky, toon aesthetic) remains an effective reminder of the brutality underscoring this fizzling world.

The level design also feels Hyper Light-y, but only in the way that it owes a distinct debt to the Zelda series, employing an open main map split into several puzzle-oriented dungeons. Though – like Zelda – there are handfuls of foes to quash, Hob’s variously themed zones gear more toward puzzle solving to restore energy to an overworld quickly running itself flat. 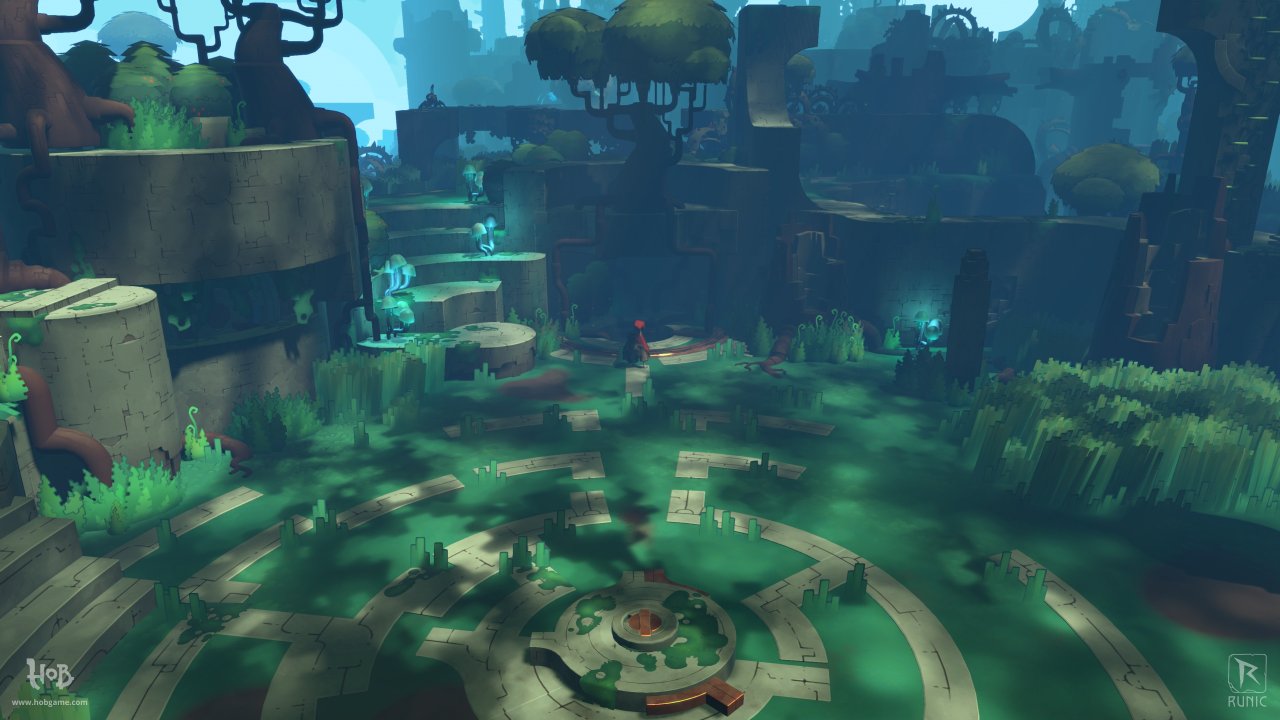 Luckily, you’re provided with two main tools for doing so. While a clunky, modular sword is your go-to for engaging enemies, you’re also given a huge robot arm in place of your severed one, allowing you to interact with the various buttons, valves and switches that once connected the land. Though mostly a puzzle-solving utility, your newfound hulk hand can provide brief moments of power, enabling you to blast through walls or ‘ground pound’ hardier enemies using a few straightforward combos.

Both can be upgraded for wider capacity and power, either by spending glowing energy orbs purloined from optional areas, or from salvaging cells from the ‘corpses’ of deactivated automata. As the challenge level is drawn mostly from puzzle-solving, upgrades aren’t crucial to progressing smoothly, many items are hidden or locked behind other puzzles that can be satisfying to crack in themselves.

I wouldn’t say combat in Hob is challenging on normal difficulty – and it doesn’t drive the action as much as it did in Runic’s earlier Torchlight games. Nevertheless, it does a rather good job convincing you of your vulnerability. Hits feel weighty, with the camera jolting slightly when damage is taken. The first time I got the protagonist clobbered, I felt like I’d been punched in the face, and though most foes are easily dodged and offed with a swift backstab, the brutal animation and vibrant blood effects at least help them feel threatening. It’s worth noting you do have the option to turn off the blood, though, if you’d prefer to keep your path unblotched.

The puzzle emphasis is well-chosen, for it’s likely Boss Doors and frequent scraps would detract from the reflective pace Hob’s environments create. While each self-contained zone must be ‘solved’ alone, you constantly find yourself using pulleys, valves and teleporters to network between previous areas. In what could have easily been 8-10 hours spent boredly backing and forthing across the same stretches of land, my revisits saw me able to use previously useless consoles I’d powered elsewhere to teleport my way to the undiscovered – and feeling satisfyingly smart for doing so. Ultimately, Hob became the interconnected labyrinth its wordless narrative alluded to, which in turn made navigating its electrically-charged terrains feel structured and meaningful. 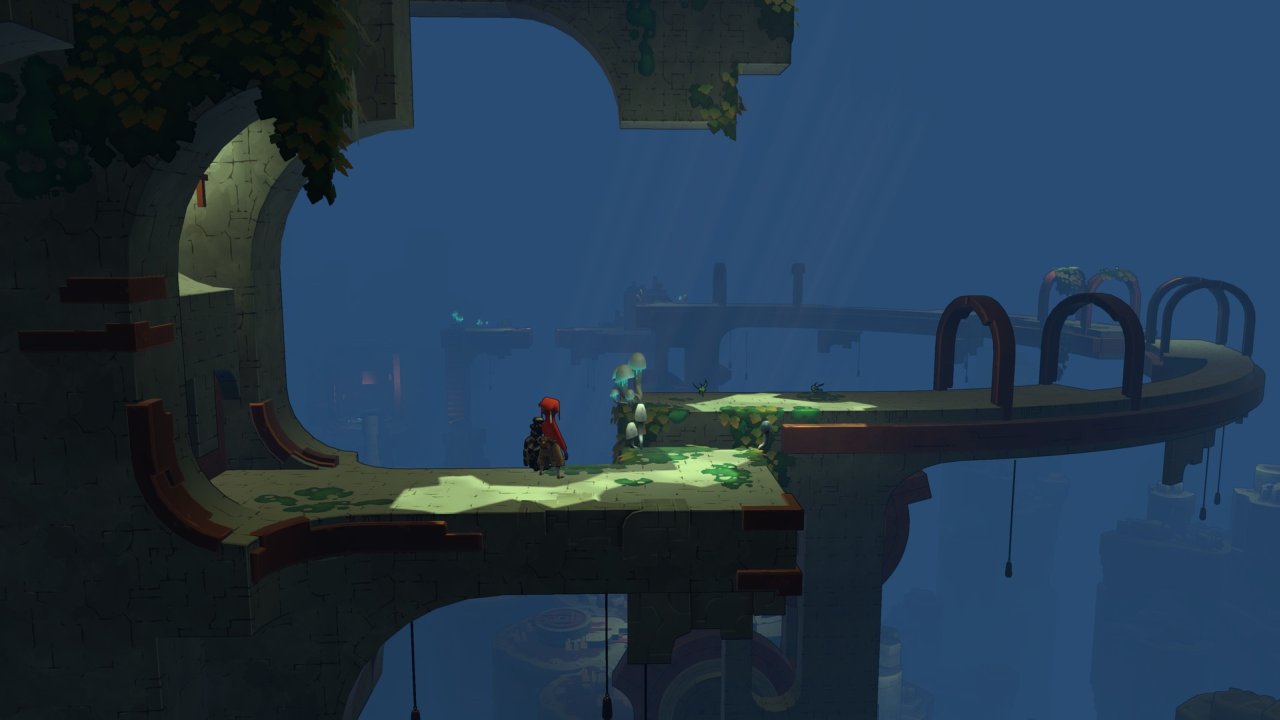 Structure is especially important in a game such as Hob, just because so much of it rests upon the player working out objectives for themselves. Like its reticent story, guidance is almost exclusively visual, meaning much of the puzzle-solving entails finding alternate paths and repowering devices to bypass different obstacles. I’d be scanning for patches of discoloured stone, or climbable vines in search of my next entry-point, and while this sort of reticence quickly became mundane in RiME due to repetitive objectives, solving each of Hob’s dungeons always give the sense that you’re powering another - just as crucial - portion of a gargantuan machine.

The RiME resemblance unfortunately extends to slippery platforming, which (while not quite so butterfingered as RiME’s caped adventurer) can be frustrating when the protagonist keeps fumbling narrower walkways, or doesn’t take to scenery when leaping between ledges. As time goes on, though, platforming begins to feel more and more like Inside, requiring just enough precision when aligning yourself with scenery to ensure the affair doesn’t become too rote. Once you’re acquainted with its specificities, the annoyance starts to dwindle. Ultimately (like it did with Inside), this lends a pacing that almost feels cinematic, creating slower segments affording backdrops their own moment of wonder, before launching into the next encounter.

While it’s true that most of the slippages surrounding Hob’s gameplay are mere annoyances that fade as you progress, there is the occasional bump that’s tougher to ignore. A key example occurs midway through, and without spoiling the many other more pleasing elements of the game, I was required to use a certain device to get to an area that was unreachable on foot. While there was no issue in reaching new ground, I died before I reached that zone’s checkpoint, meaning I was promptly rebirthed back behind the barrier. But as items stay at their most recent location when reloading saves, I found myself unable to access the next area as my safety-cushion was now on the other side. I’ve no idea how common this problem is, and though it doesn’t take long to redo, running things over again does feel oddly strict for making a mistake. 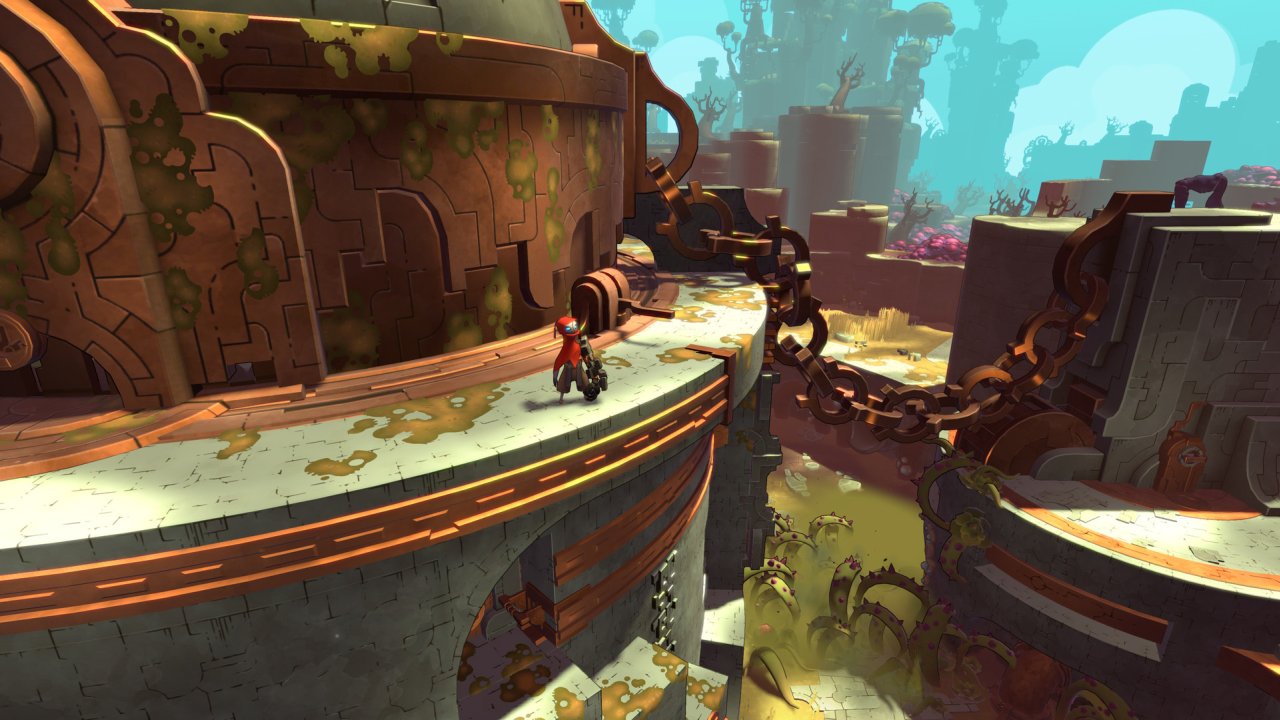 But I did – and not just for review’s sake. Maybe it’s the Zelda fan in me, but there’s a sense of secrecy surrounding this wordless network of wires that is rather quite magical. Injured in a civilization as lost as you are, you zip, tunnel and blast your way to rebuilding a deceptively complex kingdom. It was both that complexity (and that sense of lone heroism) that charmed me, and now I’m on the other side of that barrier, I think I’ll round up the rest of the city’s power cells to make sure it’s got enough juice. 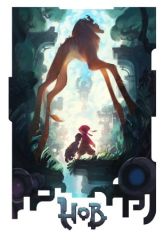 All videos for Hob (8)
Advertisement ▼