Hyper Light Drifter comes at nostalgia from an admirably conscious angle. Granted, its intoxicating environments, pulsy battles and wistful chiptune soundtrack fizzle with childlike wonder, but the true weight behind Heart Machine's action-RPG lies in its desperate moments of stillness. It's a passionate game, and its many powerful battles reflect it, balancing a dewy-eyed reverence with a rare sensibility that just beckons to be explored in depth. 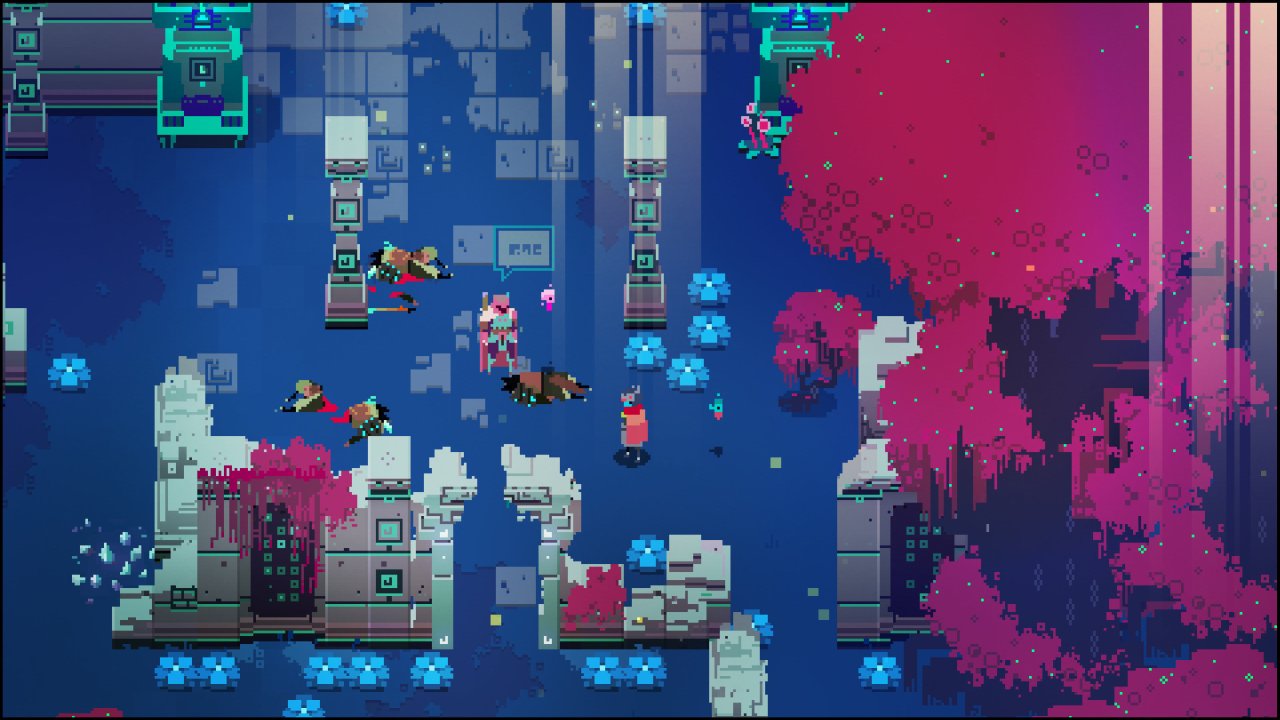 The story is almost entirely up for debate. You play as an unnamed Drifter: a caped, bluish fellow with hazy origins and a fantastic energy sword. Plagued by illness and recurring visions of conflict, our caped adventurer is soon sent sprawling through a land of ancient technologies, hunting down powerful relics to restore his lamentable state. All stories are told visually, in the form of snapshot memories, leaving much of the overall plot to be informed by the player's experience. It's largely a tale of conflict, both internal and external, and it's something that appears to drive this odd, fantastical place from the moment you pick up your sword.

The world itself is an ardent nod to the SNES era. Palette and world design nudge A Link To The Past, while the Drifter himself reminds loosely of Terranigma's caped hero. It breathes 90's throwback without coming off as stale, committing a sharp, contemporary clarity that sucks it back into modern gaming.

But for all its cheerful polish, Hyper Light's world is a rather sombre one indeed. Organic life forms are something of an endangered species, instead replaced by strange, technical hybrids and machines long laid into slumber. Friendly faces are scarcer still, and no matter how far from home I travelled, each NPC I encountered appeared to be just hanging on; tucked away in solitude in fear of the darkness at large.

And fearful they should be, for Hyper Light Drifter's prettiness is but a thin veil for its brutality. You're as lethal here as your enemies, and the crisp detail afforded to each animation ensures it's well noticed. You can hack the heads from giant crows amidst ribbons of pinkish gore, and leave battlegrounds scattered with the corpses of your mechanized foes. Some enemies will even flee in terror at the sight of their murdered comrades. The darkness here is quite unmistakable, and it's invigorating to see it portrayed fluently without looking quite so glum. 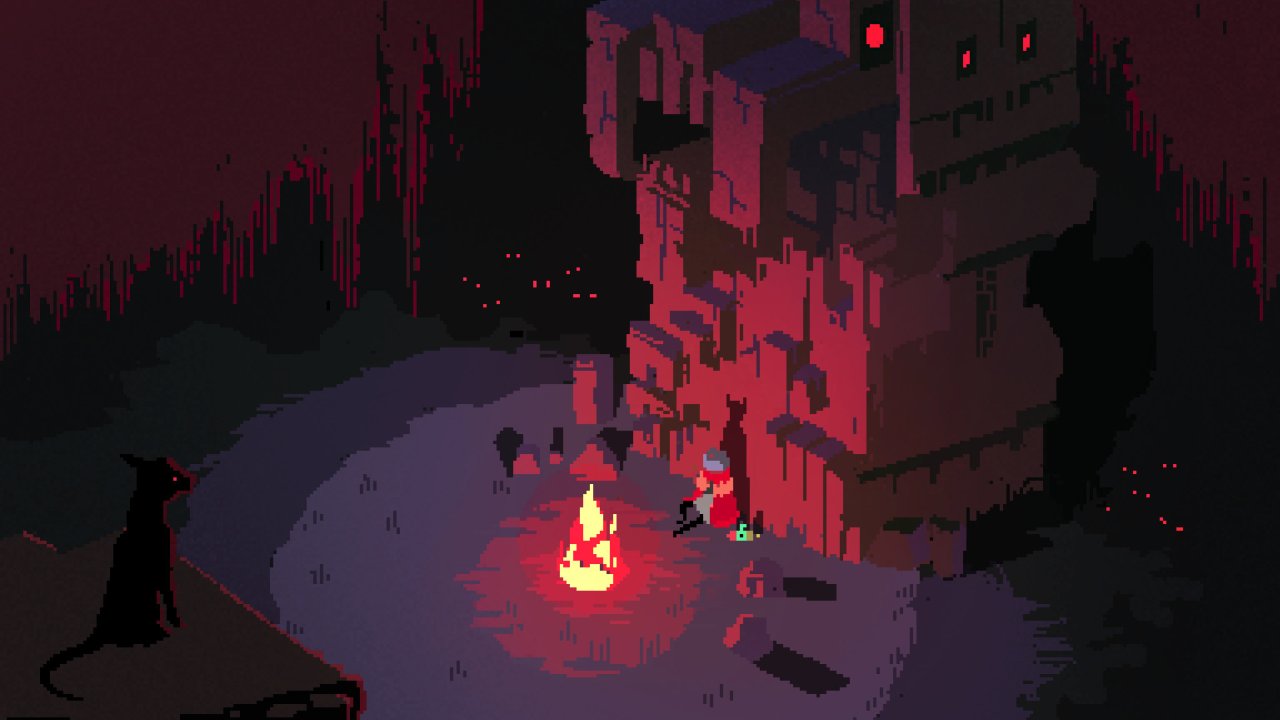 Hyper Light Drifter overlooks four main lands, each of which is connected by a central village. The town serves as the player's main base, to be returned to at any time to improve weapons, moves and take a breather from getting killed. Little else can be surmised from the beginning, as Hyper Light Drifter offers next to no explanation as to where to go or what to do next. Instead, you're plunked down in the middle of the town square and left to explore for yourself. The lack of distinct markers or direct hints can take some getting used to (and it can feel downright ominous against such a sprawling world), but level design is just suggestive enough to lend a subtle direction early on.

It helps that objectives invoke much the same premise: hunt down a collection of artifacts, unlock the boss door and activate a tower of energy. It's an ultimately repetitive maneuver, but the contrasting difficulty underlying each themed region ensure it's kept interesting. Dungeons are distinctive, marked with recognizable elevators that lead into booby-trapped labyrinths. Some ruins yield readiness, with towering brutes poised behind each corner, while in others you'll need to think ahead. From floor-vanishing pressure pads and fire platforms to memory-based walkways, dungeons alternate cleanly between strategy and speed, proffering just enough respite to get your head together before the next trial unfolds.

Part-machine, part-organism, part-something else entirely, the beastly natives of Hyper Light Drifter are surprisingly eye-catching, given their minimalist design. They're remarkable in that they don't really feel monstrous; more weird, addled wanderers that happen to be bigger and brawnier than you. Most enemies are area-specific, and carry their own quirks that demand special attention. The flying birds, for example, can only be slashed when diving, whilst the hulking, crystal golems will thump the ground to stick you with deadly stalagmites. While perfectly exploitable alone, you're rarely given the luxury of an isolated kill. More often are you shunted into tightly-packed arenas, left to alternate between skills to avoid getting whacked. Strategy and response are vital to Hyper Light's combat, and minding your surroundings is most often key to survival.

That goes triple for the big fights, by the way. Skimming Zelda in appearance, Diablo in attitude, the bosses of Hyper Light Drifter are as devastating as they are majestic, culminating each of your dungeoneering exploits in a true-SNES showdown. No foe feels insurmountable, but each is distinctly unyielding, met with a supersized health bar that must be oh-so-cautiously hacked away. There's a nip of Bloodborne in there too, with monsters becoming more aggressive as fights progress, punishing even minor slips in vigilance with staggering chain-attacks. While prompt and recurrent death can almost inevitably be expected, the frustration is well-managed, as each boss carries its own distinct phases that - once memorized - make for a thrilling quickstep of assault and evasion. 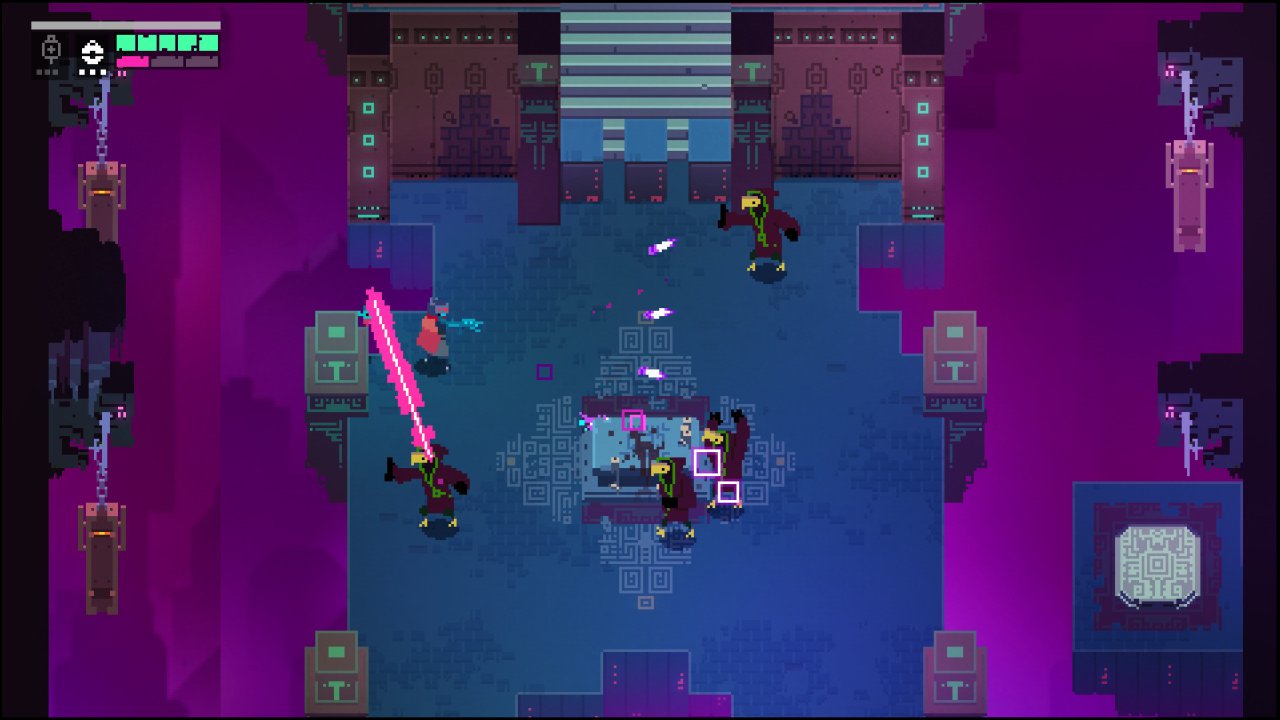 The slimline control scheme feels right at home with the classics. You can move around, interact with objects and slash your energy sword in skillful sets of three. Much of your time will likely be spent with the dash feature, however. Sharp, snippy and stylistically pleasing, dashing allows you to dodge enemies, cross narrow rifts and merge through special doors in a simple, memorable maneuver that renders encounters satisfyingly slick.

Gun use is where the control scheme unfortunately starts to date. Aiming is Metroid-y, demanding a slow, manual precision that just isn't feasible during the fast paced battles. I often found myself needing to concentrate on individual enemies in order to pop a cap in them; something that - given the game's focus on group combat - succeeds chiefly in feeling fiddly and ultimately unsatisfying. This said, guns can come in handy against larger bosses, and since bullets can be restored by slashing at the surroundings, running out of ammo isn't too much of an issue.

There's a fast-travel mechanic, that can be accessed at any time via the main map. It's a nifty addition, both mechanically and visually, allowing the player to hop between regions by way of stylized QR codes. Otherwise, the map isn't much help. While great for an overview, it only ever shows your general whereabouts, which isn't much help if you're lost in a maze of ice-giants with no sign of your destination. Most blunders can be remedied by backtracking, but if the to-and-fro of Chrono Trigger erred on frustration - Hyper Light Drifter's opacity does little to patch things over.

On your travels across the four locales, you'll encounter various chip fragments that can be exchanged for skill upgrades via the main village. Your Health, Weapon and Dash abilities all offer perks in Hyper Light Drifter, ranging from the ability to dash around corners to a Link-like spin attack to curb multiple enemies. Whilst not strictly necessary to floor any of Hyper Light's foes, they add a sleek complexity to the game's simple battle system, offering chances at additional damage that certainly come in handy once you start taking on the game's Big Bads. 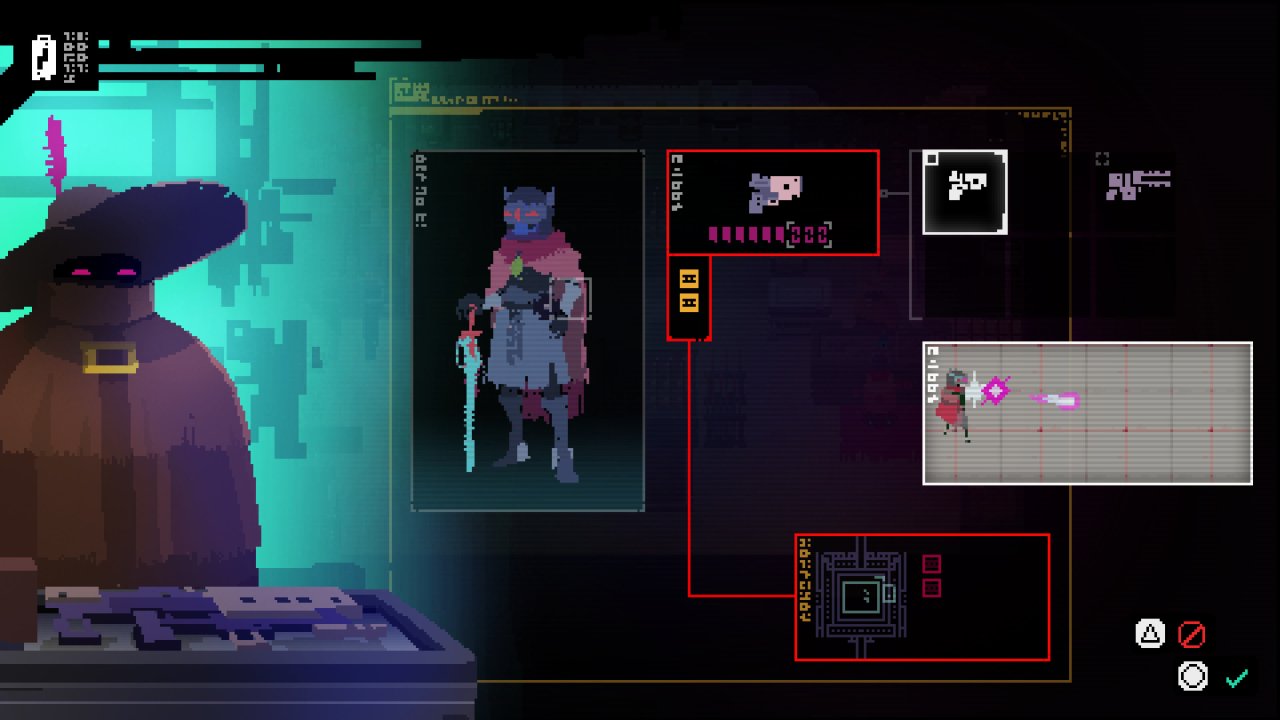 The game's many hidden rooms are another hark to gaming's curious youth. Secrets practically drench the Hyper Light map, hoarding a wealth of items and upgrades in alignment with old-school treasure hunting. Some areas can be found just by toddling off-screen for a bit, but others can be nail-biting, teasing Shovel Knight in a trying courses of combat and well-timed dashing trials.

The love Heart Machine carries is a love shared by thousands, but it doesn't merely settle for straight-up tribute. Its themes are intensely personal, and in a way it's a shame they aren't given more notice. The world of Hyper Light Drifter is glistening with childhood memories, yet the punishing encounters of our gaming youth are realized here with thoughtful, poignant clarity. Its loyalty to old-school techniques can occasionally come off as dated, but its sensitive approach to beloved retro greats makes Hyper Light Drifter a game that not only extends nostalgia, but respects it. And that's difficult to get across.

Our ratings for Hyper Light Drifter on PlayStation 4 out of 100 (Ratings FAQ)
Presentation
89
The world of Hyper Light Drifter is drenched with Zelda-like charm, flaunting a cheery, nostalgic vibrance that only renders its dark themes more noticeable.
Gameplay
75
An amalgam of skill-based combat and elusive treasure hunting, the game feels sprung from the heart of Shigeru Miyamoto, culminating in a handful of hulking bosses that'll test your patience, as much as your mettle.
Single Player
79
A skillful blend of open exploration and punishing combat, this is a story of conflict through-and-through, though it's a notably distant one.
Multiplayer
NR
None
Performance
95
You'll find multiple glitches in Hyper Light Drifter, but all are perfectly intended, with the game's sleek framerate rendering combat (at least technically) painless.
Overall
83
Hyper Light Drifter fuses old-school combat and attentive world design with unique sensitivity. Its world owes almost entirely to the SNES era, but this game is a tale of individual intelligence - even though it's never really told. 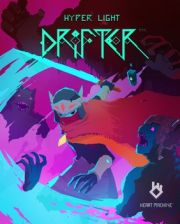