The Uncharted franchise has long become a big staple for the PlayStation brand. Since its debut on the PS3, the action adventure series from Naughty Dog has continued to grow in scope and spectacle, and has twice won the coveted Game of the Year title right here at New Game Network. But with the story of Nathan Drake now definitively concluded, the series has a chance to broaden its horizons and explore new stories and characters. And that’s exactly what Uncharted: The Lost Legacy aims to accomplish. As the first story DLC in the series' history, it hopes to pave the way of future installments without the cover star of the franchise. In fact, this expansion offers a sizable journey that warrants a standalone release, so if you’ve missed out on Uncharted 4, you can grab The Lost Legacy on its own. Since we don’t usually evaluate DLC, this review is based on the game as a standalone purchase. 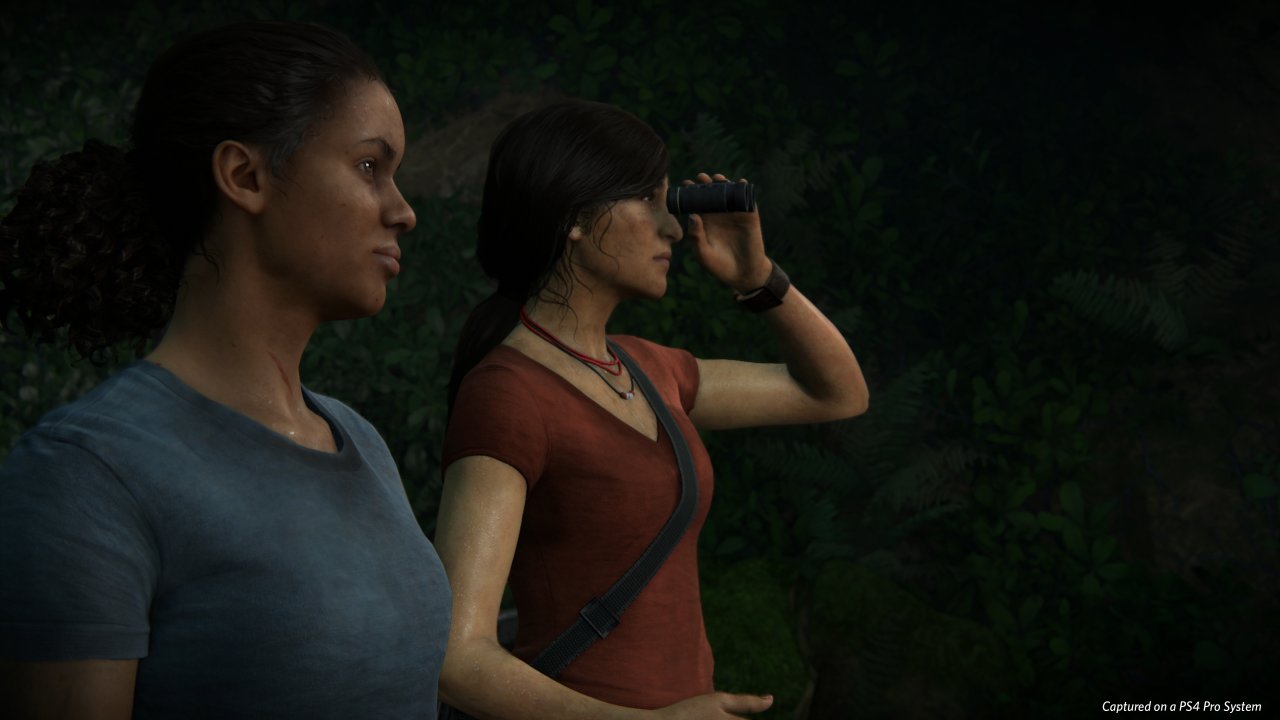 Uncharted: The Lost Legacy follows after the events of Uncharted 4: A Thief's End. So, while you can play it as a separate adventure, you’ll be missing out on a few story details and callbacks if you missed the main game last year. Players assume the role of Chloe Frazer, who was notably absent in the main game, on her own treasure hunt for the mysterious Golden Tusk of Ganesh. The journey finds our hero in India, where Chloe was originally born before she moved to Australia. Consequently, while the game focuses on the search for the artifact, we also get to learn more about Chloe, her background and her family history, with a new notable reveals along the way. On this journey, Chloe is accompanied by Nadine Ross, who she hired to assist. Nadine took the job because she needs the money in order to reclaim her military company Shoreline, with whom she’s had a bit of a falling out during the events of A Thief's End. She wants to restore her ownership, and steer the company into more noble affairs; a questionable motivation at best, given its past.

The story beats in The Lost Legacy will be familiar to any fans of the series. The duo will trek across the unexplored terrain in search of the tusk, while being perused by a local warlord Asav, who has his own plans for the treasure. As this is more of an expansion than a full game, the scope of the adventure is a bit limited. The game largely takes place across a single environment type, similar to the overgrown jungles of UC4, so there’s no globetrotting. Characters are also fewer in number, and most of the story focuses on the pair of adventurers. Despite being billed as a two-protagonist story, Chloe easily takes the reigns without missing a beat as the main hero (and that’s who players assume control of), while Nadine remains largely uninteresting and goes through an almost exactly the same character arc as she did in UC4. It’s also about 6 to 7 hours in length, that’s with mostly trying patient stealth approaches and completing over half of all optional content. But, with a reduced price tag, Chloe and Nadine’s journey is well worth undertaking. Besides, more Uncharted is always welcome – you’ve still got tons of well written character dialogue, well delivered jokes, and an overall adventurous and fun-loving atmosphere.

Similarly, the gameplay is also largely reminiscent of Uncharted 4, which again should be taken as a compliment. You can read our review of that game for more in-depth details on the mechanics. Across a mostly linear set of climbing/platforming and enemy encounters, the gameplay continues to shine. Chloe can use all the same tools as Nathan Drake – including the new additions like the swing rope – and can handle weapons with the same aptitude for destruction. The combat encounters still offer the option to be stealthy, marking enemies, and using tall grass for cover. There’s still disappointingly no way to distract enemies with a thrown rock or something. Chloe can surprisingly quickly overpower much larger men than her, much as Drake did, but perhaps this is one of those moments where gameplay needs to trump realism. On the other hand, during scripted sequences when going up against an obviously stronger opponent, the fights are visceral and the choreography of these brawls is very well done. 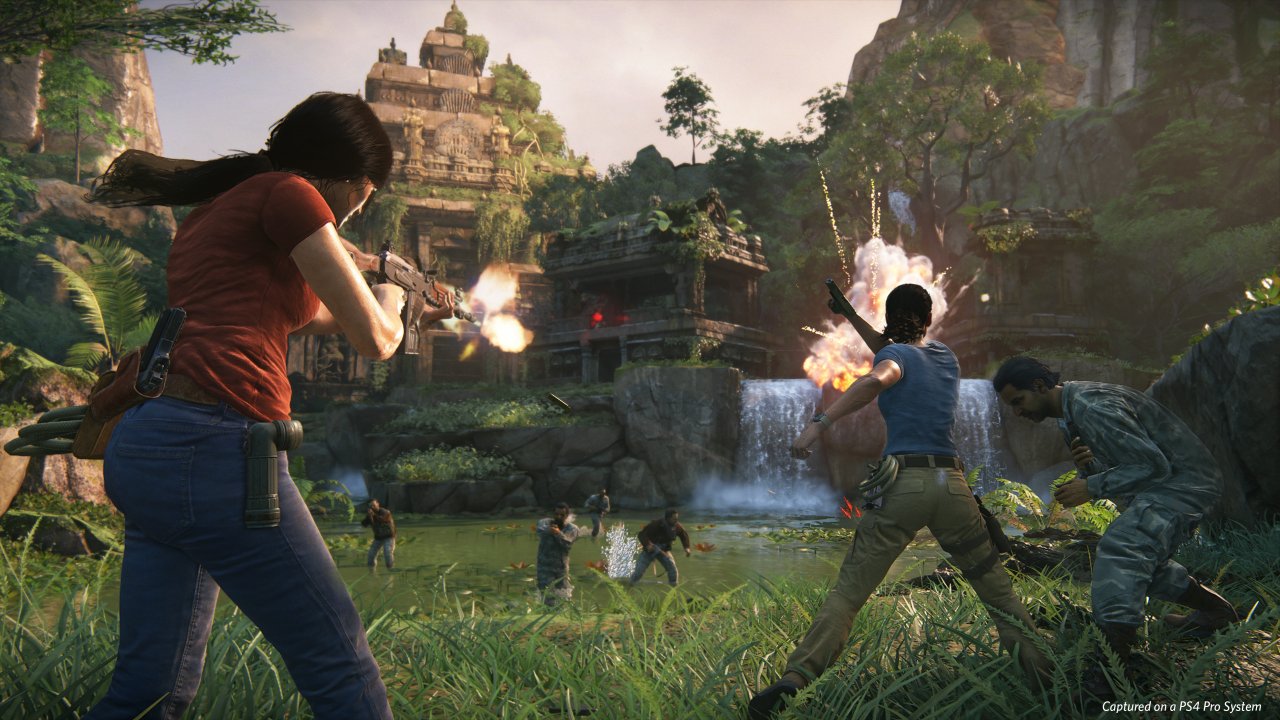 When stealth isn’t an option or you’ve been spotted, you can fight enemies in melee but it remains clunky and dangerous; if Nadine is nearby you can perform a special takedown of an enemy together, but hand to hand combat in general is not worth the risk. So that’s when the guns come out, and there are over 20 in the game, including mostly all of the same pistols and rifles you’ve seen in the main game. Gunfights play out much in the same way as the main game, though many enemies are armored or wear helmets right from the start. The rare golden guns, such as RPGs or silenced pistol, are now found in locked supply crates. To open, they require you to complete a new minigame where you must rotate the analog stick to a specific direction when the controller vibrates, two or three times. The typically grandiose action set pieces have their moments, but they are fewer in number and feel a bit recycled from previous games in the series, and perhaps overlong in the case of the finale. Puzzles too are fewer in number, but they are original and satisfying to solve.

You’ll be sneaking and fighting your way across a series of linear levels that feature multiple paths and elevation changes, though nothing quite as grand as the biggest villages in UC4. On the other hand, fans who enjoyed the semi-open trip through Madagascar will enjoy playing through the Western Ghats hub level in The Lost Legacy. At a certain chapter in the game, you are given a jeep to drive around a fairly large, fully open hub world, with a few destinations in the corners of the map to visit in order to progress the story, each featuring their own encounter scenario. There is also an optional quest and other stops to make in-between. The characters keep the exploration lively by discussing their personal stories, and also commenting on the things you discover. This is undoubtedly a test of how an open world design may look like in future Uncharted games, and it works well. 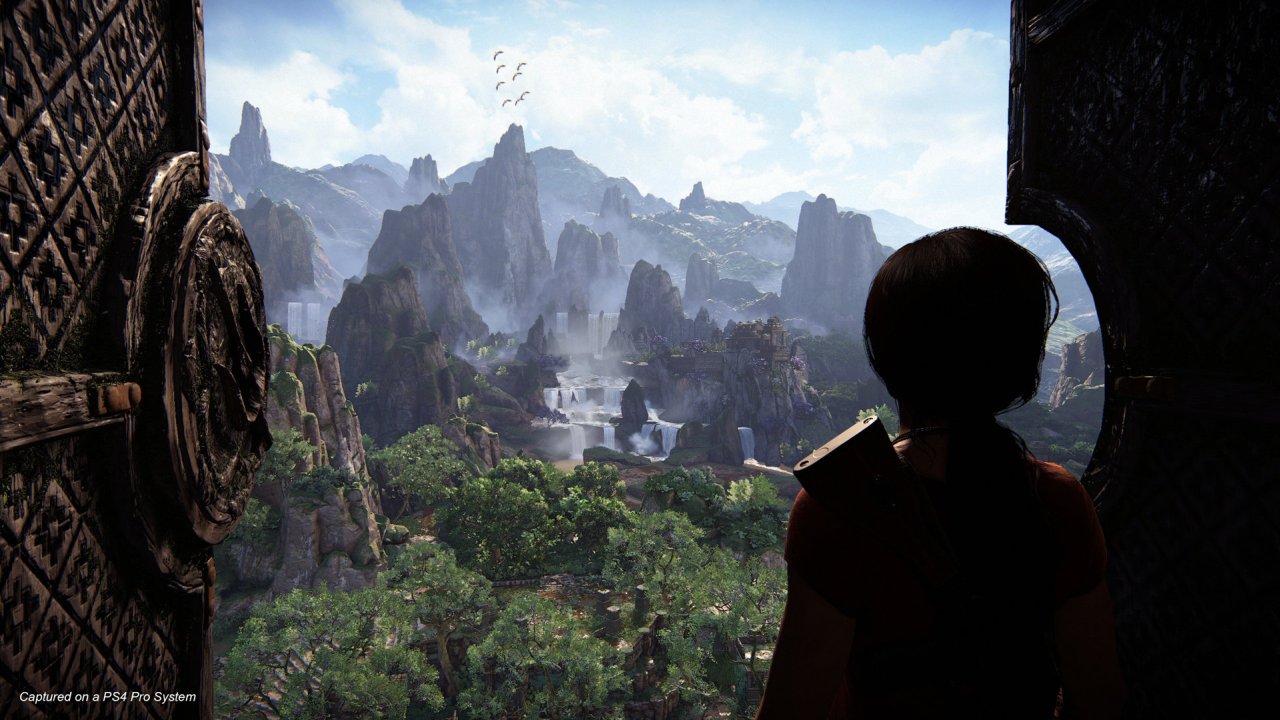 Despite being a smaller standalone release, The Lost Legacy has all the features of the mainline entry. After beating the game, you’ve got gameplay and render modifiers, a photo mode with plenty of filters, bonuses to unlock, treasures to find, optional conversations to engage in, new photo locations to discover, and so on. Also included is the entirety of the Uncharted 4 multiplayer, which adds tons of value for those who don’t own the main game. Everyone can play together and enjoy the most refined and balanced version of the online modes, as all the patches and free DLC is included. Plus, a new Survival Arena variant mode is being introduced with the launch of this expansion, which features plenty of variants of new difficult and dynamic waves of enemies and modifiers.

It wouldn’t be an Uncharted title without it pushing the processing power of the console to its limits. Even using a launch PS4, the game looks absolutely astounding, with amazing colors and lighting, beautiful scenery and gorgeous vistas, and fantastic effects. And equally as impressive is the attention to detail in the environments and the facial animation of the characters, which is impeccable and packed with lifelike detail. Audio design remains strong, and the main theme is arguably better than the one in Uncharted 4. Whether you consider this DLC or expansion, this is a full featured presentation packaged that easily earns top marks. There was one instance where the game, usually known for its high level of polish, had a scripting issue and a lighting bug, but it corrected itself after a checkpoint restart.

Uncharted: The Lost Legacy knows its formula and sticks to it well. It takes everything that Uncharted 4 did so well, and incorporates it into a new journey. It may be smaller in scale and follows in very familiar footsteps, but the gameplay, characters and presentation remain some of the best in gaming today. If you’ve somehow missed Uncharted 4, this is still worth picking up as a full-featured game with a full multiplayer suite and a great price. If you’ve enjoyed Uncharted 4 and would like more, this also fits the bill perfectly. Uncharted: The Lost Legacy is a great spinoff entry in the action adventure series that gives fans a reason to return to the exciting life of these treasure hunters.

Our ratings for Uncharted: The Lost Legacy on PlayStation 4 out of 100 (Ratings FAQ)
Presentation
93
Both artistically and technically impressive, this is a great looking and sounding experience that is on-par with a full priced entry.
Gameplay
82
Gameplay remains very solid and quite similar to Uncharted 4, with a couple of small additions. Stealth or action, the mechanics flow together well.
Single Player
80
A journey that’s smaller in scale, and with some familiar set pieces and visuals, but still one of the highest levels of polish and entertainment production values around.
Multiplayer
82
The full multiplayer suite from Uncharted 4 adds plenty of value if you don’t own that game already. Naturally it’s the most balanced/patched version of the mode to date, plus including plenty of DLC content has been added over time.
Performance
88
A single bug aside, the game performs with no hitches or framerate problems.
Overall
83
Uncharted: The Lost Legacy is a great standalone entry and is exactly what you'd hope to get from the first single player expansion in the franchise. It does almost everything just as well as a full price release with great visuals, solid gameplay, and varied multiplayer. Whether or not you've played Uncharted 4, this is an adventure worth undertaking. 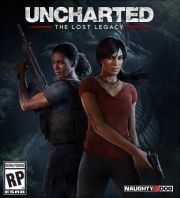 All videos for Uncharted: The Lost Legacy (5)
Advertisement ▼