Let’s flash back to the launch of the PlayStation 4 in 2013 for a second. The quality of the console and the excitement of its release masked a pretty unremarkable launch line-up. Cross-gen releases (Battlefield 4) and lackluster exclusives (Knack) took up much of the spotlight, but one gem did manage to leave a significant impression. Finnish developers Housemarque’s Resogun came out of nowhere, for me anyway, to save the launch. It was a gorgeous, fast-paced shooter that still remains a blast to play. My love for that title, as well as their later projects, made getting excited for their newest endeavor, Nex Machina, easy. 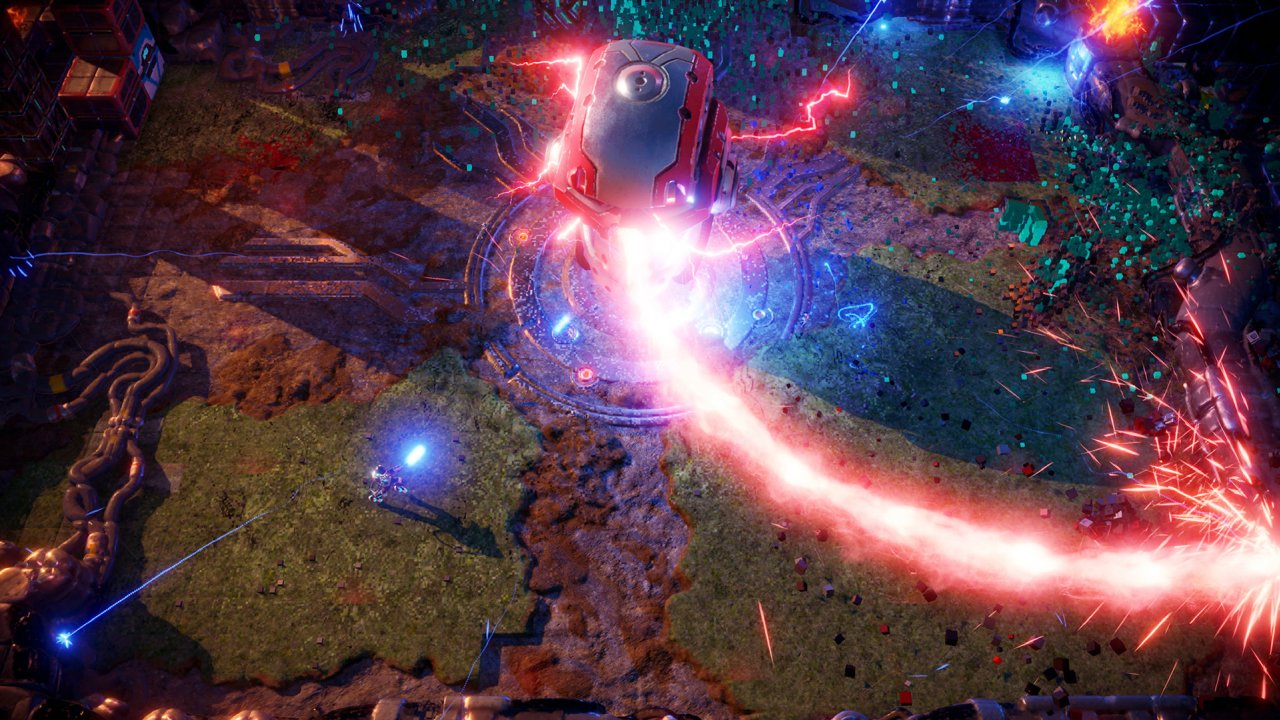 Like Housemarque’s previous project, Alienation, Nex Machina is a top down, twin-stick shooter. Players are tasked with blasting every alien that comes at them across five different stages, with each stage split into multiple smaller areas. There’s no plot to really speak of, so the game is purely focused on high score chasing. Unlike some other titles in the genre, the game also eschews the idea of randomly-generated levels. The levels are the same each time you go through them, which opens the door for you to study the layout and figure out the best point of attack, as well as where to go to save civilians. Each stage also culminates with a boss battle that will truly test your mettle.

I don’t have a problem with randomly generated environments, but I’m glad Housemarque avoided them for Nex Machina. The studio clearly put a lot of thought and care into how each individual area looked and felt. This means that the break-neck pace of the game never slows down because you get stuck in a level devoid of excitement. It’s pure run-and-gun adrenaline throughout the main campaign. Even on the easiest difficulty, you constantly need to be moving around and paying attention to what’s going on around you. Failure to do so, particularly on the higher difficulty settings, and you’ll get beaten down relentlessly.

While not as difficult as it could be, Nex Machina does provide a stiff challenge on its higher difficulty settings. As mentioned, it’s easy to get overwhelmed by the sheer amount of chaos unfolding on your television screen, but I reckon most fans of the genre will be able to keep up. When you die, though, that’s when things can get rough for even the best players. As you make your way through the game, you’ll pick-up various power-ups that either improve your standard weapon (range, power) or special weapons that need to be charged up (bombs, lasers). When you die, though, you’ll lose most of your power-ups. This style of punishment can make the later levels in the game near impossible to handle due to your lack of sufficient firepower. I understand the need for punishment for failure, but this seems a little too excessive. 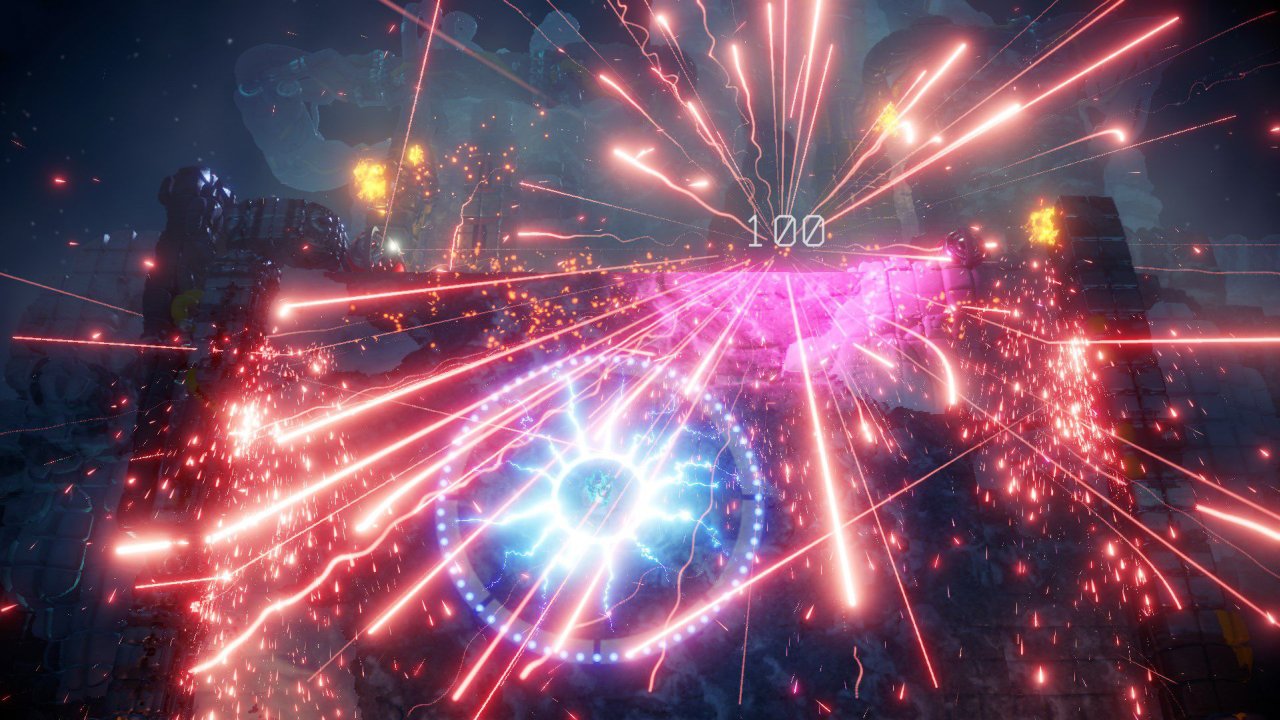 I also wasn’t crazy about the power-up system in general. The upgrades to the standard gun are fine, and they come at a decent enough clip that I never felt underpowered, unless I died and lost them. Since you can only hold one special weapon at a time, though, there’s a good chance you may accidentally pick something up you didn’t want to. It’s easy to stumble onto a lackluster special when you are trying to blast your way through dozens of enemies. I would have preferred if something you just dropped stayed on the field for at least a few seconds, so you have a chance at reacquiring it if you want to. Most of the power-ups are fun to use, but there are definitely times where you wish you hadn’t foolishly dropped one that would have been better served for the situation.

My concerns regarding difficulty and item management aren’t nearly enough to dull my enthusiasm for Nex Machina, however. Every level and each battle delivered a symphony of destruction to the senses. And much like Housemarque’s past projects, there’s a hefty amount of content in the game. Outside of the main arcade mode, score-chasers can play through any of the levels in search of the perfect run. Co-op is also on the table, which adds even more chaos to the screen, but surprisingly doesn’t let players play online with each other. Finally, arena mode drops you into familiar locations, but challenges you to complete a level with a modifier attached to it. These modes, combined with online rankings and XP grinding, add up to a complete package for fans of the genre.

With only five levels included, Housemarque was able to give each of them their own unique style. Over the course of Nex Machina, you’ll travel to locales such as a dystopian, futuristic city and the jungle ruins of another world. Each of these levels looks great, with neon-hued colors that really catch the eye. The designs for the enemies are also great, although I do wish there was more variety as you progressed through the game. At least the bosses at the end of each level manage to look different from each other. 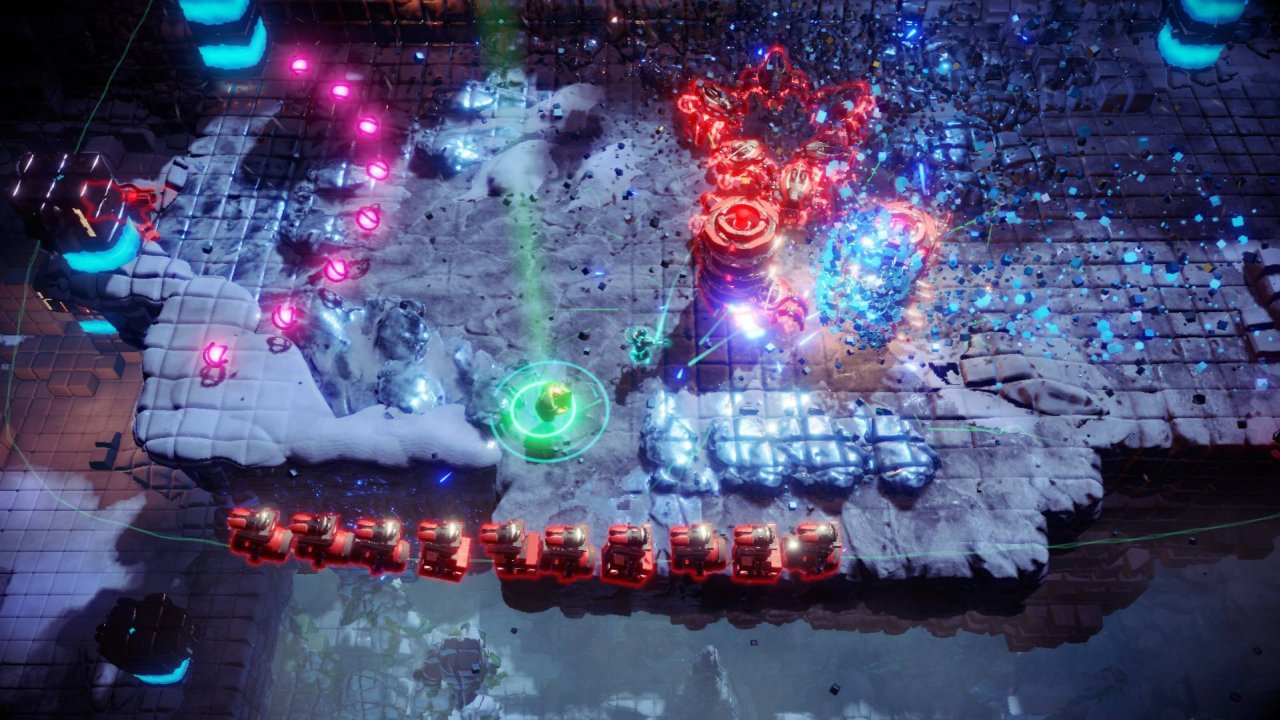 Returning for another go-around with the studio, composer Ari Pulkkinen has teamed with Tuomas Nikkinen for the synth-heavy soundtrack of the game. Similar to the pulse-pounding output of the likes of Carpenter Brut and Perturbator, Pulkkinen and Nikkinen delivered a score that perfectly matches the action found in the game. Stand-out tracks like “Machine City” and “Cosmic Hero” will give you that extra dose of adrenaline needed to survive the often brutal world of the game.

A sensation for the senses, Nex Machina is a mighty achievement from the team at Housemarque. Everything from the non-stop, run-and-gun gameplay to the eye-watering visuals showcases a developer at the peak of their powers. While there are certainly some nagging issues to be found in the game, such as the uncompromising difficulty and lack of online co-op, they aren’t enough to deter me from recommending the title to anyone who appreciates a good shooter. Whether it’s due to the presence of Eugene Jarvis or it’s just that the studio continues to improve, but this represents the strongest release yet from the Finnish developer.

Our ratings for Nex Machina on PlayStation 4 out of 100 (Ratings FAQ)
Presentation
85
Gorgeous, colorful graphics make the action on-screen a blast to take-in. The synthwave soundtrack perfectly scores the action, as well.
Gameplay
88
The cumbersome power-up system aside, Nex Machina offers tight, precise gameplay. Controls are responsive enough that I never felt betrayed by them.
Single Player
78
More than enough content to satisfy fans of the genre, but the lack of any sort of narrative is a bit of a downer.
Multiplayer
72
Co-op is fun enough with a friend, if a little too chaotic at times. Online play not making the cut, though, is a disappointing.
Performance
85
While certainly gorgeous, Nex Machina never pushes the PS4 past its breaking point. As such, the title runs incredibly well, even in the face of intense on-screen action.
Overall
82
Nex Machina is another impressive addition to the portfolio of Housemarque. It’s a top-tier shooter with dazzling visuals that never lets up on the action. 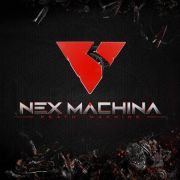 All videos for Nex Machina (3)
Advertisement ▼