Finnish developers Housemarque have been making games for a while now, but they are likely best known for their most recent effort - the PlayStation 4 launch title, Resogun. Since the last console generation, the studio has been building its credibility as an arcade developer, first with the uneven Dead Nation and then with fun-but-flawed Super Stardust series, but Resogun is the title that really put the developer on the map with its thrilling gameplay and impressive design that begged for players to keep giving each level one more try. Housemarque’s games have usually been simple in structure, but impressive in how well they communicate the mechanics and fuse them with twitch gameplay. 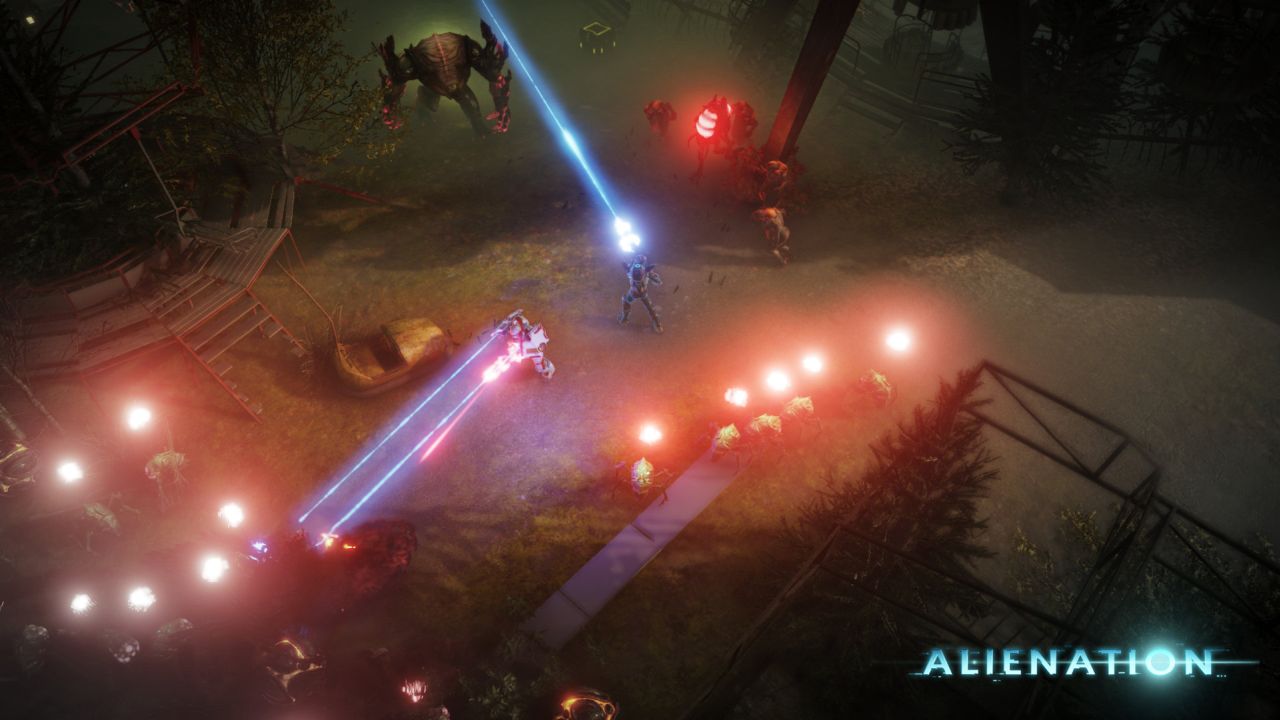 This is why Alienation is a bit of a disappointment. The game feels like an evolution of the Housemarque set-up, still clinging to the studio’s arcade ideals with leaderboards and a competitive element, but it also attempts to inject the mixture with some narrative elements and co-op gameplay. Unfortunately, the package doesn’t hold up as Alienation can’t decide whether it wants to be a decidedly different Housemarque game or repeat the recipe for success. In the end, the lack of direction feels apparent and Alienation never distinguishes itself as anything other than a mediocre twin stick shooter. Furthermore, looming over the title is Arrowhead’s Helldivers, which came out last year and used many of the same ideas with more success.

Controls are the very core of the arcade genre and this is where the issues begin for Housemarque. Alienation just isn’t as much fun to play as previous titles from the studio. Quite frankly, it’s surprising to see a Housemarque game struggle in this area as it tends to be something the studio often gets right. The twin-stick shooting in Alienation never feels awful, but determining what you hit and how much damage you did can be difficult. In turn, the shooting just doesn’t feel very rewarding. There are times you can watch a horde of aliens whittle down with each shot you fire, but other times trying to take out a single enemy can be annoying as you unload rounds, unsure if you’re actually doing any damage. The best part is using boost abilities to zip out of tight places, or tossing a remote grenade into a horde of enemies. But while these aspects are fun, I found the mines, the cluster grenades, and the melee attacks to be less satisfying. The unimpressive feel of the combat make the very act of playing Alienation a little off-putting, and the larger design of the game doesn’t do the controls any favors.

Players begin the game with - and constantly return to - a world map from which they pick the next mission. There are a handful of mission locations, with four that you return to frequently. Each locations has a few missions, which are procedurally generated. To Housemarque’s credit, it’s pretty impressive how much mileage they get out of these locations (each mission is using the same map, just starting you at a different location). That being said, what could have been a globetrotting adventure feels rather small scale, hoping that the moment-to-moment gameplay can distract you from noticing you’re playing the same map over and over. 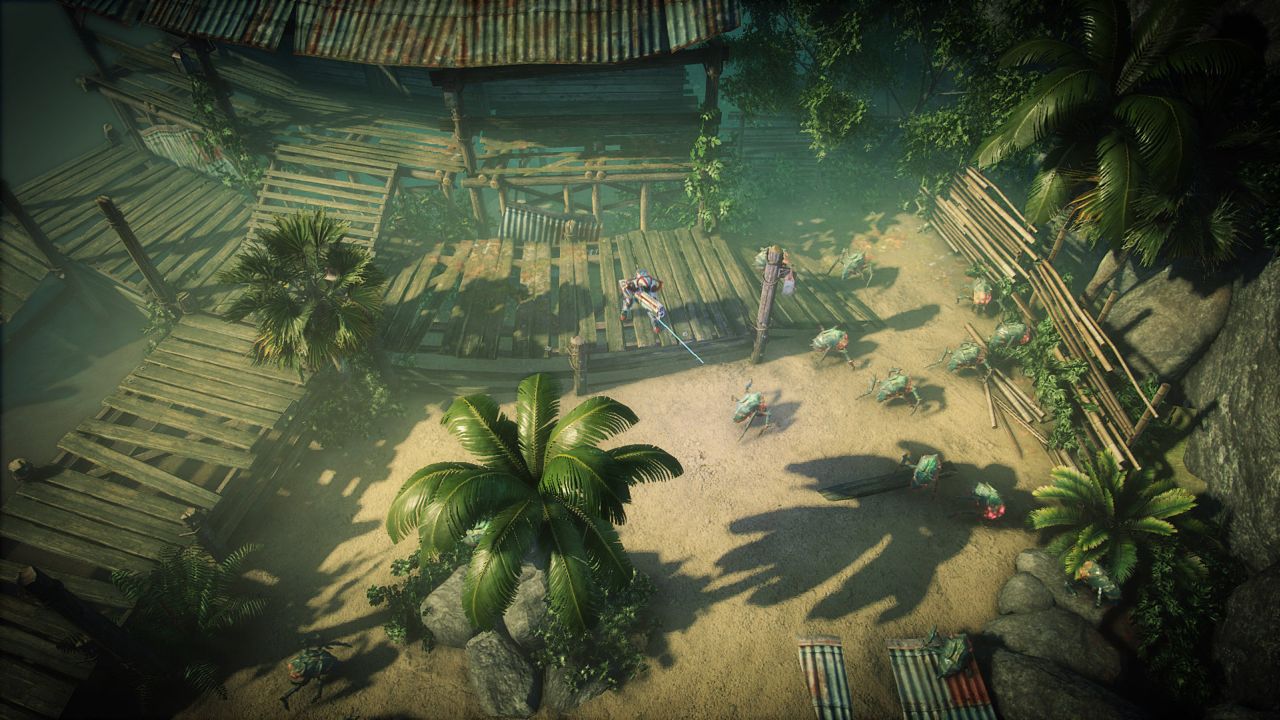 Like most of Alienation, that moment-to-moment gameplay is uneven. Sometimes you can see flashes of what was supposed to be fun about Alienation as you weave your way through cover and blast away enemies, but for the most part Alienation fails because it feels so cluttered in its visual communication. Encounters don’t feel like they were crafted with intelligent design choices because they weren’t. Alienation is usually just pouring enemies onto the screen, oozing obstacles into the fray and smearing them around - hoping the result is exciting.

Further cluttering the whole experience - both the moment-to-moment action and the RPG-lite upgrades that happen in between missions - is the multiplayer experience. Alienation can’t decide if it’s cooperative or competitive. Players work together to complete the objectives, but after the mission one player is clearly marked the winner of the level. Should I help up a downed player because we need to complete the mission? Or leave them there while I rack up some kills? Alienation doesn’t have an answer for you, it’s not making commentary or baking the idea of a team divided into the game, it just doesn’t seem to know what it wants of its multiplayer. The game doesn’t match players together, instead it allows you to jump into a list of public games available. This isn’t really a problem, except that you’re often just getting plopped in the middle of someone else’s game, making the experience feel disconnected and random.

The real issue is that the combat doesn’t seem to take huge advantage of having multiple players. There are some enemies that are vulnerable in specific areas and are easier to bring down when you have someone acting as a distraction, and you can aid downed players, but it was rare that I thought of encounters tactically because (again) enemies are just streaming onto the screen so quickly and so randomly that you hardly feel like you have the time to use your teammates for tactical advantage. The end result is an ongoing series of firefights as enemies swarm over the screen, and you just happen to have teammates sometimes. 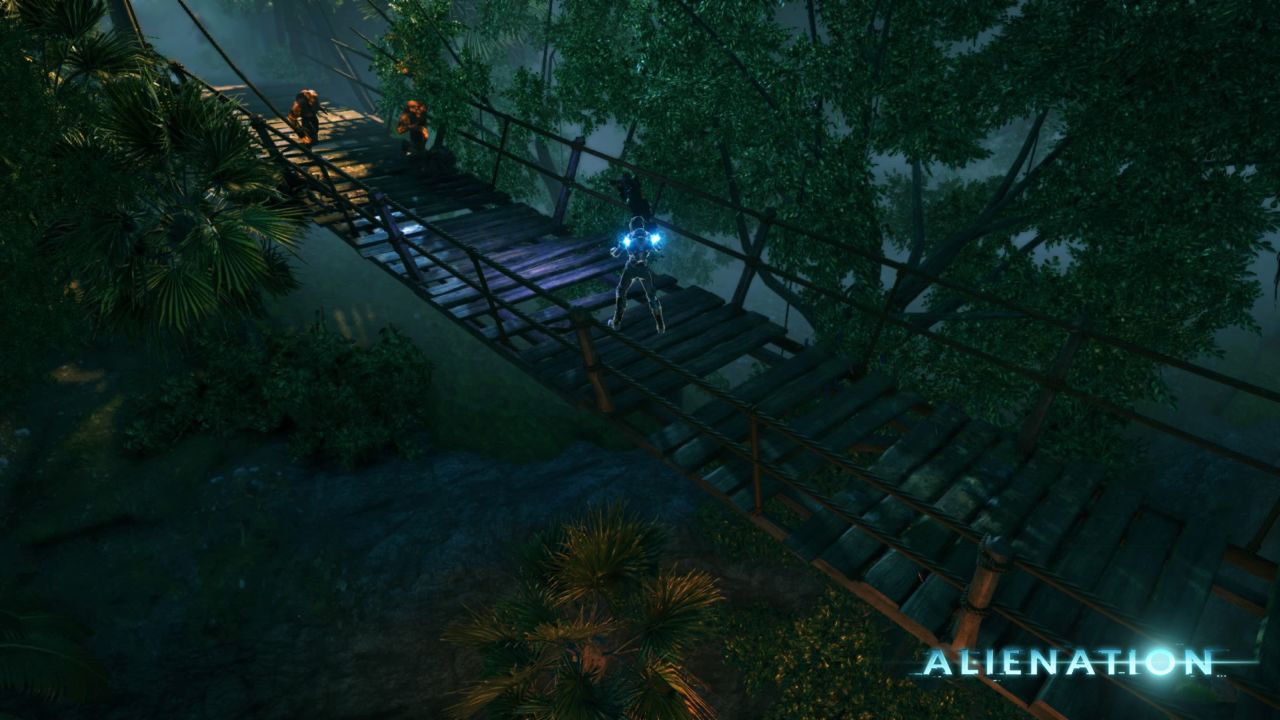 The worst part of these missions - particularly toward the end - is how long they feel. Some missions can be completed in a matter of minutes if you have four solid players, but if you play by yourself or a single friend, they can get lengthy. Later missions extended into the half hour or even forty-five minute range. You can checkpoint your progress, but when you return to these checkpoints the enemies are all resurrected. If you’ve destroyed these checkpoints (as some trigger-happy people seemed keen to do) it can mean a lot of backtracking.

While you battle your way through each mission your character will level up and you’ll receive drops to upgrade you weapons. The RPG-lite elements feel as unrefined as everything else in Alienation as the loot drops are unpredictable. I once went three levels without getting my main weapon upgraded, which left me battling it out with tough enemies while using a gun that was severely underpowered. It doesn’t feel like there’s a ton of variety in these weapons, either.

If there’s a strength to Alienation, it is the servers and technical elements. The game ran steadily and aside from one instance where I had trouble joining a game, the servers always seemed to allow for players to smoothly jump into each other’s games. We might finally be reaching the promised age of multiplayer gaming where praising games for simply working is becoming silly, but with some painful online memories not-so-long-ago, I still think stable online gameplay deserves a tip of the hat.

The game looks alright; it’s usually pretty clear to pick out enemies and upgrades in the visual chaos the game indulges in. The sound design isn’t nearly so clear. Much like Resogun, the speaker in the PS4 controller lets you know when your health is low or you’ve received multipliers to your score, but it’s hard to hear over the explosions and gunfire. 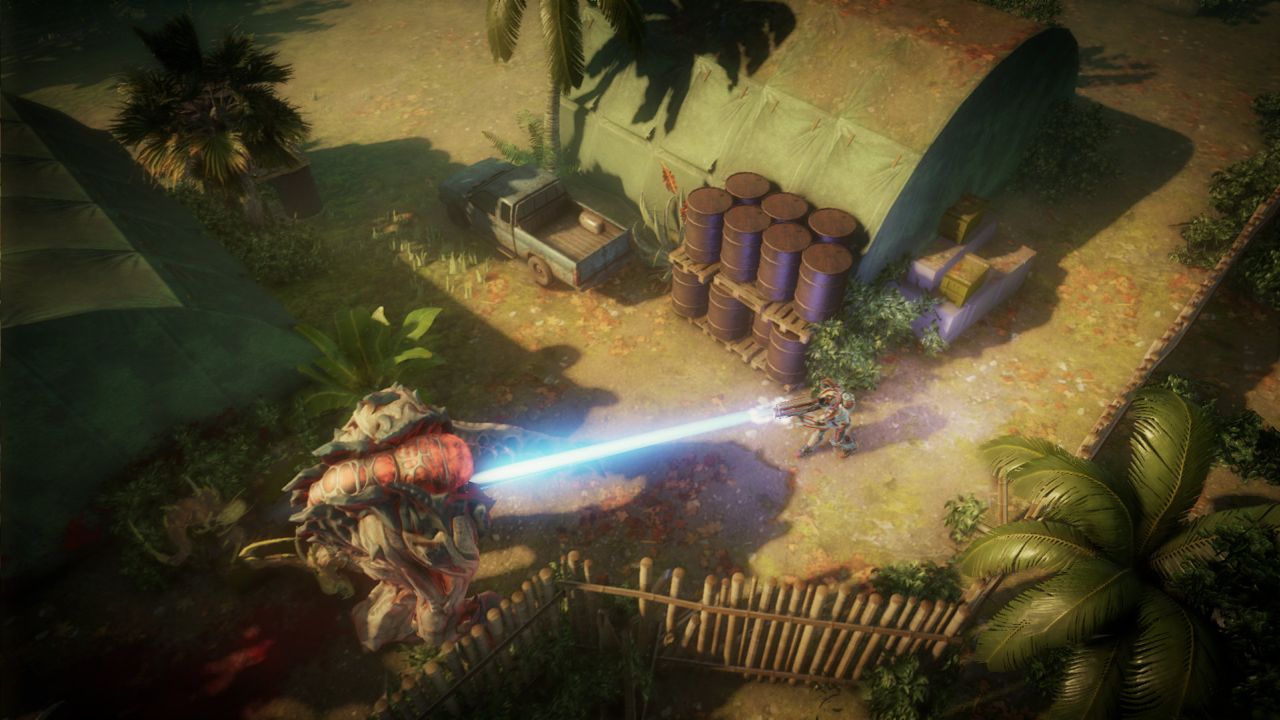 I could go on with the mediocrity of Alienation. I could talk about how the locations don’t offer variety and how they’re just three different themes riffing off the same motifs. I could talk about how boss fights devolve into a handful of players circling the map while taking turns to stop and fire a few shots at the boss to slowly whittle away their health. I could get into the lackluster plot that utterly fails to be compelling. There’s a lot of issues with Alienation, but I feel like I’m unfairly piling them on. I think there might be a good game with all of these pieces, but they haven’t been assembled into something coherent. To put it another way, you can tell that Alienation could be a fun game, but it’s lacking the direction required to make it fun.

It feels like Alienation lacks the conviction to tell players what it is. It’s cooperative but it’s not. It’s an arcade shooter, but there’s kind of a story (a bad one). There’s globe-trotting, but it recycles the same maps. The game feels like a series of half-measures that never equal a whole. It’s trying to please everyone, and thus, pleases no one. This doesn’t feel like the Housemarque I know. If you want a real sample of who this studio is, go back and play Resogun. If you want a twin-stick, cooperative alien-invasion shooter, go play Helldivers.

Our ratings for Alienation on PlayStation 4 out of 100 (Ratings FAQ)
Presentation
62
Alienation wants to be a globetrotting adventure but really just recycles the same maps time and again. It looks fine, but the sound design is messy.
Gameplay
58
Alienation is a series of half measures that never manage to be a whole.
Single Player
NR
There is a single-player mode to Alienation, but the game is clearly designed with multiple players in mind.
Multiplayer
51
It’s hard to say if Alienation is cooperative or competitive, as it struggles to really engage players in a meaningful way.
Performance
80
Stable and runs well for a game so focused on online multiplayer.
Overall
60
Alienation feels like a series of half-measures that never come together, destined to be little more than a mediocre arcade shooter. 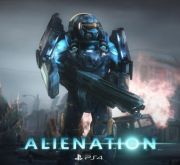 Our Review of Alienation
60%
Adequate
The Verdict:
"A new twin stick shooter from Housemarque that doesn't quite measure up"
Game Ranking
Alienation is ranked #1389 out of 1646 total reviewed games. It is ranked #118 out of 138 games reviewed in 2016.
1388. Republique
PlayStation 4
1389. Alienation