Most console launches are accompanied by a sports game or two, whether it’s based on a real thing or something that the creators have thought up. PlayStation VR similarly has its share of minigames that take inspiration from the activities that keep score and have set rules and playing fields. But RIGS: Mechanized Combat League does this particular genre justice. Featuring plenty of content, entertaining and well-designed gameplay, and a variety of modes to undertake in offline or online campaigns, this is one of the better launch titles for PS VR. 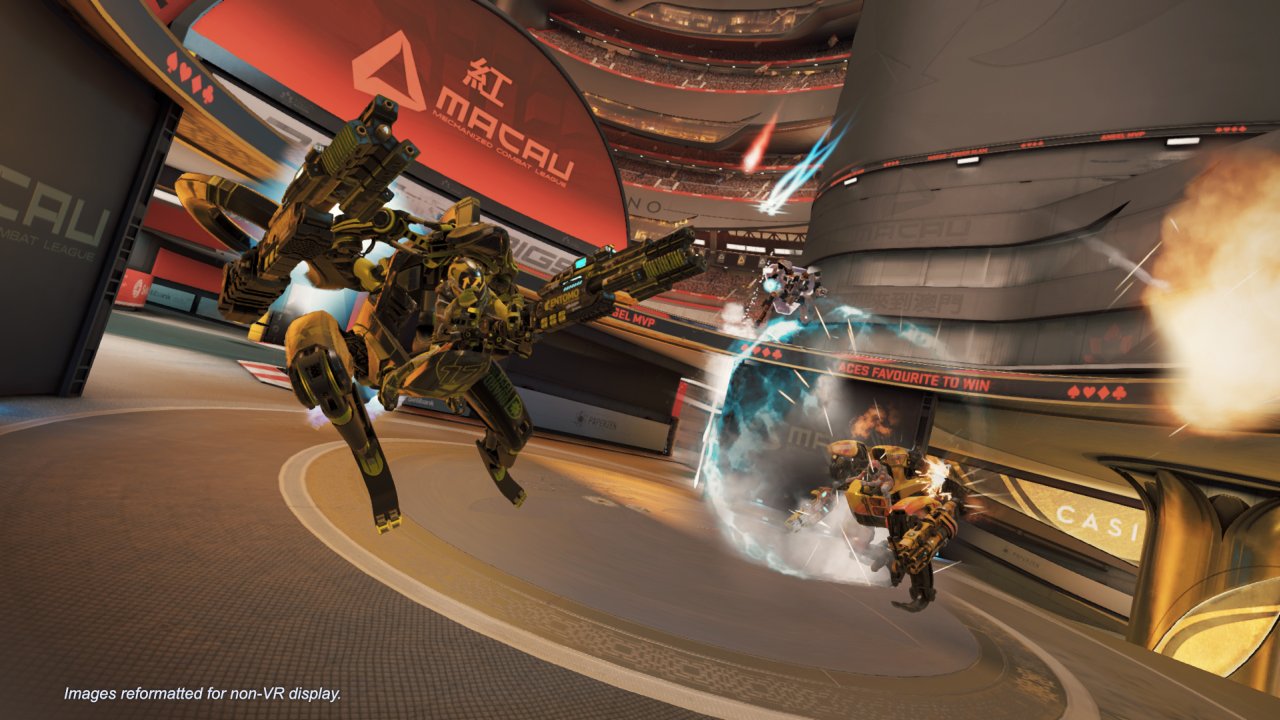 RIGS MCL is centered around a futuristic sport where human pilots assume control of combat rigs (robots) and do battle in arenas. You’re a new pilot starting out with the league, and after going through a few tutorial sessions you pick a team to join (the only difference is the logo) and start your career. Much like a real sport, you and your two AI co-pilots will be facing off against the other teams in the league, trying to finish the season atop the standings. There is also a concurrent elimination tournament that you’ll play in, and an individual top player competition that runs through the whole season.

The campaign design in RIGS is surprisingly in-depth, letting you manage a few different things around your team. You start off with no fame and no cash, and a single rig that you get to choose at the start of the game. As you succeed in the league, your earnings and popularity will grow, and you’ll be able to afford more RIGS. You can also hire a variety of AI co-pilots with increasingly better skills, but who’ll also want a higher cut of the earnings. With increased popularity you’ll unlock sponsors, who want you to perform specific tasks (such as scoring certain number of touchdowns), and in turn will give you cash and customization items for your character. It’s impressive how many different aspects on the management side of things you get to play around with.

This sort of depth continues right into the gameplay itself. There are four rig classes, spread across six different special abilities. The four rig classes include a heavy and slow but powerful Sentinel; the small but nimble Hunter; an all-around balanced Mirage, and the hover-capable Tempest. Each rig comes with a variety of stats, from speed and shields, to melee damage. The rigs also have specific weapons assigned to left and right guns, ranging from pulse cannon to rockets and machine guns. Just playing around with the different rig classes will take a bit of time to find your favorite – and of course you must keep balance in mind, so choosing the right co-pilot rig for the next match is also important. As mentioned, each of the four classes can also have one of six abilities. These abilities range from your rig exploding and damaging enemies when you’re defeated, to repairing others nearby automatically, or having a shield on your back to limit damage from being flanked. The amount of variety and intricacies that RIGS offers is both impressive and surprisingly balanced. 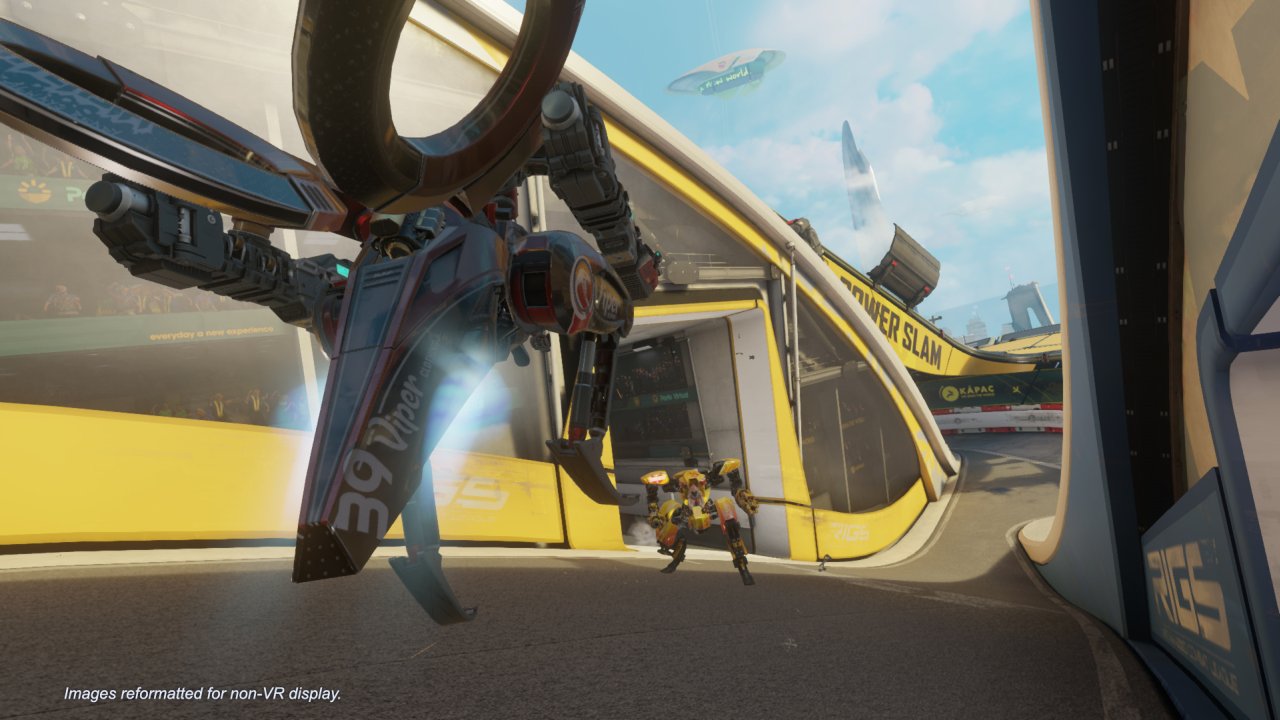 All game modes in RIGS are played as 3 vs 3 matchups. The game only contains four arena maps, located around the world, but at least they are well designed to support each of the gameplay modes. They also have details like low-ceiling paths that only a Hunter rig can utilize. The gameplay modes include Powerslam, Endzone, and Team Takedown. The latter is the most straightforward – you’re simply tasked with taking out as many opposition players as possible, and the team with the most eliminations wins. Endzone plays like a game of American football – players compete to control a virtual ball, and run it into the opponent’s goal. You can even pass the ball to teammates if you’re about to be destroyed. Lastly, Powerslam is similarly inspired by Basketball; once in Overdrive, players must run up to and jump through a large hoop in the center of the arena to score a point. The three modes offer a nice balance between shooting other rigs and trying to fulfill sports-like objectives. With the variety of rigs to choose from, there are plenty of variables and nuance to consider for each match type, in addition to seeing how your opponents line up.

The abovementioned Overdrive mode brings us to the deep gameplay mechanics of RIGS MCL. What may seem like a straightforward shooter has yet another layer of strategy to consider, if you’ve been noticing the trend. Any time you’re piloting your rig, it operates in one of three power modes – Turbo, Repair, and Impact. In Turbo mode, you’re moving with extra speed, helping you escape a losing fight or get to objectives faster. Put your rig into Impact mode, and your weapons deal more damage. Lastly, to recover your health faster you put yourself into Repair mode. Swapping between these power modes throughout the match is both important and engaging, as if you’re redirecting the rig’s power to where it matters most depending on situation. It’s simple as well, as the modes are intuitively assigned to the Square/Triangle/Circle buttons. RIGS is an action game of surprising variety and complexity, and should be commended for it.

As this is a PS VR exclusive title, the virtual reality headset is used to control the aiming of your weapons. A fairly standard design choice; you can also turn your head to turn the rig, though that can also be accomplished with the usual right stick. You move with the left stick and fire with the trigger buttons. The head movement tracking is good, and the game responds quickly to aim adjustments. As with a few games with this control scheme and due to its fast paced action and environment traversal, some players may be prone to nausea. The game has a helpful feature (which can be turned off) of dynamically limiting your field of view during intense turning maneuvers, to help avoid disorientation. It’s possibly why I had no motion sickness issues with RIGS, but I did with other games that use this control scheme on PS VR. The only complaint with the RIGS interface is that the UI takes up a notable part of the screen, showing plenty of info but also pointless effects to simulate your in-suit view, and it can get in the way of your aiming. 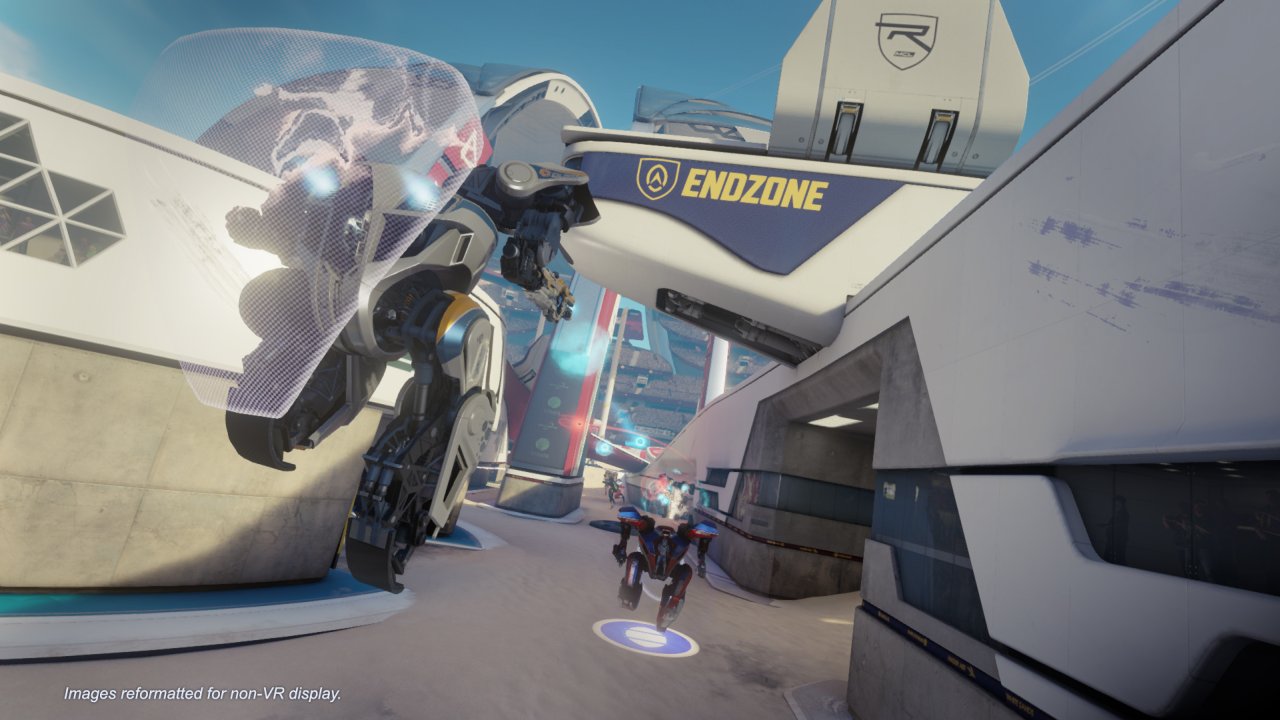 Once you’ve accustomed to your rigs and dominated the offline leagues, there is yet more to do. You can dip into the Trials area, where players can take on increasingly difficult challenges for rewards. The Trials objectives range from speed runs through an arena, to destroying waves of targets or surviving against endless numbers of enemy rigs. And once all those skills are honed, it’s time to venture online. In multiplayer, you’ll find a standard 3v3 ranked mode, where players can play, earn points and move up into higher skilled online divisions. There’s also an option for a 1vs1 mode, with one pilot and two AI’s on each team. For a more casual experience, there’s a private 1vs1 mode, and an Exhibition 3v3 mode, although that’s unranked and doesn’t provide rewards. Online play itself has been smooth, though matches are rarely made up of 6 human players, and the most populated mode is Team Takedown. If you want to play something else online, you’re in for a lengthy wait. Players can only use the rigs they’ve already purchased, so multiplayer isn’t a way to test out rigs that you don’t own yet.

RIGS: Mechanized Combat League is an entertaining, well designed and surprisingly deep sports-like title. Managing your AI co-pilots, earning fame and completing sponsorship deals is enticing and keeps the momentum going as you’re fighting through the seasons and championships. In the arena, managing your overdrive and power modes in one of the many carefully crafted rig types and abilities is highly rewarding. The game performs without issues and does its best to help against potential nausea by dynamically adjusting FOV. RIGS: Mechanized Combat League is an all-around good game that’s a highlight of the PlayStation VR launch lineup, and a fun and surprisingly deep experience in its own right.

Our ratings for RIGS Mechanized Combat League on PlayStation 4 out of 100 (Ratings FAQ)
Presentation
72
A decent looking game, with plenty of color and nice visual effects. The match announcer can be repetitive and inaccurate, though.
Gameplay
83
The arena combat action is both satisfying and fine-tuned. The rigs seem more or less balanced despite a wide variety of options.
Single Player
80
A surprisingly deep career mode that spans multiple seasons and tournaments, letting you grow a collection of rigs, hire better co-pilots, and complete sponsorships for new customization items.
Multiplayer
70
The player populace seems low, though that’s on par with PS VR launch games. Connectivity seems fine when you do get into a match.
Performance
80
The game handles potential motion sickness issues with a dynamic FOV, and there were no tracking problems with the headset.
Overall
79
RIGS: Mechanized Combat League is an all-around good game that’s a highlight of the PlayStation VR launch lineup, and a fun and surprisingly deep experience in its own right. 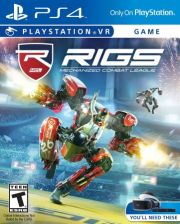