Once you finally figure out where you are supposed to go and the route you will be taking, you are left to the task of making all of the jumps and landings. The control scheme of Mirrors Edge discourages button mashing; many moves will require you to hit certain buttons a certain number of times. This leads to some incredibly frustrating moments when you hit the space bar slightly too late or too early, causing Faith to fall to her death for the umpteenth time. These high precision controls, compounded with the difficulty of figuring out where you are supposed to go, make the game incredibly frustrating, and this is only made worse by the illogical use of a checkpoint system. Every twenty minutes or so there is a automatic hard save, and in-between these saves at seemingly random intervals are checkpoints that the game will send you back to if you die, although if you restart the game and load the last save it will go the most recent hard save and not the most recent checkpoint. That means if you get stuck at a jump right before a hard save, die six times in a row and rage quit, you will have to complete the level from the start. You will want to have an object nearby which you can break so that your computer and peripherals remain intact while playing this game. 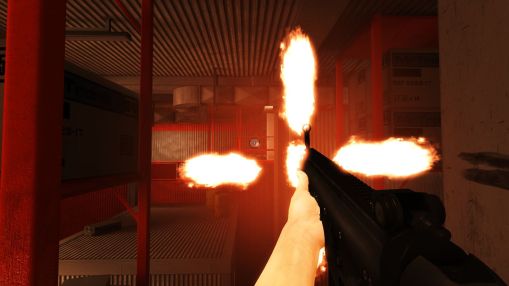 Once you get hold of a gun, Combat is easy. Getting hold of one is the hard part.
When the stars align, and you make all the right turns and hit the right keys at the right time, Mirrors Edge is a lot of fun. The way Faith controls is fantastic; you don’t feel like a disembodied torso floating through the air, you actually have mass, and will see your arms flailing and your legs kicking as you run and jump around the mostly varied environments. Some level design is a bit questionable, but other levels are really neat and memorable. One of my favourite moments in the game took place fairly early on in a huge underground concrete room which looked to be part of a reservoir or dam. You are trying to find a way out, and gradually climb higher and higher amongst the massive concrete pillars as soldiers take shots at you from below. In this level, it is pretty clear where you have to go, and the jumps are challenging but makeable. If more of the game was like this, Mirrors Edge could have been so much more enjoyable, but unfortunately levels like these are exceptions, and you will usually be left wondering where you are supposed to go next and cursing wildly as you fail to get there.
Combat in Mirrors Edge is also a bit wonky; most of the time in the game you can simply run past enemies, but on a few occasions you are forced to fight (you can tell because the enemies glow red). While you are given a number of fancy kicking and punching moves, they are far too difficult to pull off and combat will consistently come down to disarming the first guy you come to and using his gun to kill the rest of the baddies. Even this manages to become frustrating, as you have to press the right button at exactly the right time to disarm your opponent, otherwise Faith will flail wildly as the bloke she was trying to disarm smacks her and then shoots her. If you do hit the disarm button at the right time, you are treated to a fairly impressive disarming animation, which will leave you with a gun, and once you obtain such a weapon the combat is easy and fairly enjoyable.
Prev123Next 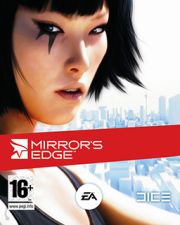 Our Review of Mirror's Edge
71%
Good
The Verdict:
"Flashes of first-person platforming brilliance are overshadowed by generally frustrating trial-and-error game play."
Game Ranking
Mirror's Edge is ranked #981 out of 1621 total reviewed games. It is ranked #58 out of 69 games reviewed in 2009.
980. Lost Planet 2
PC
981. Mirror's Edge