I first saw Helldivers at a Sony PAX Prime Indie party back in 2013. Eager to play anything on the then-unreleased system, I picked up Helldivers and very quickly had my character die. There were dozens of other titles to play on the floor, so I didn’t spend much more time with this top-down co-operative shoot ‘em up, and I wasn’t quite sure that I “got it" during my brief hands-on. Now, thousands of bullets, hundreds of deaths, and dozens of star systems later, not only do I get Helldivers, I think it’s pretty good, apart from a few notable issues. 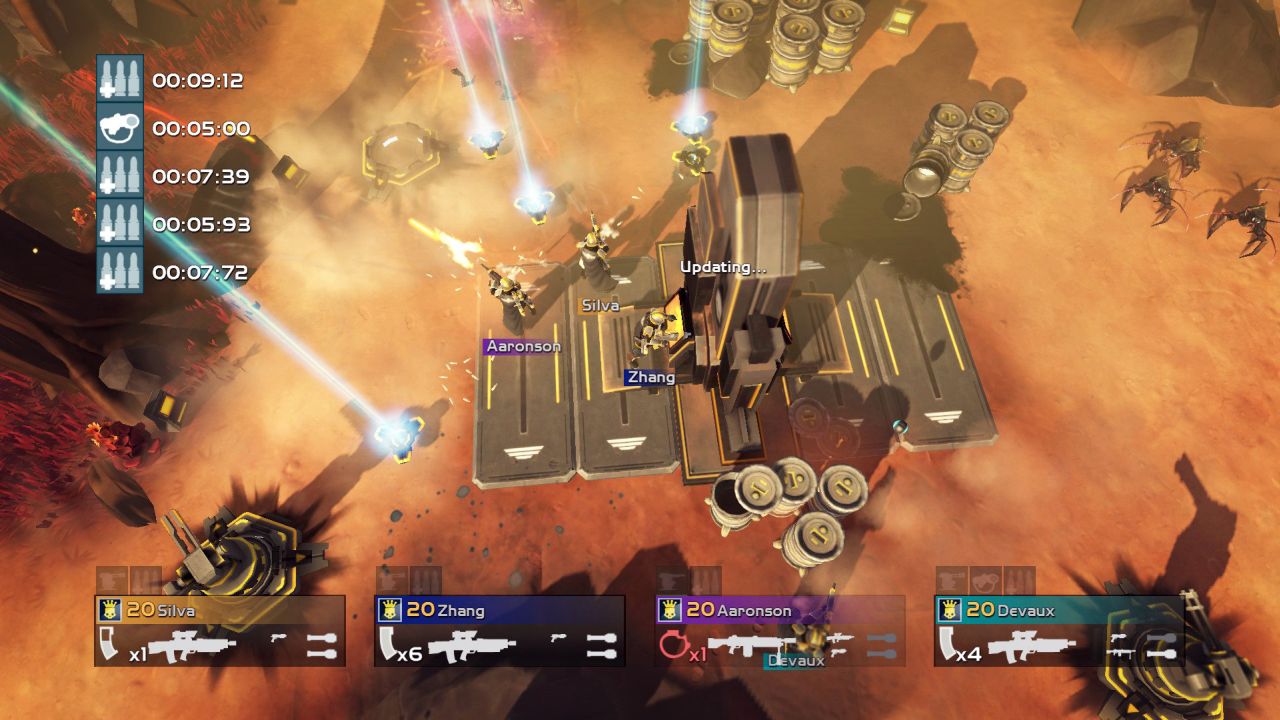 When you log into Helldivers for the first time, a propaganda video channeling a Starship Troopers vibe, explains that the home of humanity, Super Earth, is a place of freedom and democracy. But these rights come at a price. Super Earth is under attack from three converging armies, all located in a different star system. The only way to defend humanity and its heroic ideals is by joining the Helldivers.

Helldivers immediately gets you involved in the war effort with a quick training sequence, then throws you into the fray with your own, personalized character. You begin every mission aboard a starship with the opportunity to customize your character with various options offered. You can change your uniform as you unlock different kinds of camouflage and switch your gender, but not much else. What’s more important than the look of your character is the loadout. Players can choose their main weapon, a special ability, and a series of utility items called Stratagems. After your character is customized and your load out is selected, you hop in a drop pod and begin the mission.

Helldivers’ overarching structure is pretty simple. Each mission has one to four objectives to complete, after which players must get to the extraction point to evac off of the planet. Objectives vary from capturing a hold point on the map to grabbing a briefcase and taking it to a secure location. Some objectives require you to enter a series of button combos to activate terminals, others can only be completed by calling in special weapons. There are enough unique mechanics that Helldivers can usually keep these objectives fresh; even if they become repetitive, there are other ways the game keeps players on their toes.

While you are traversing the map to complete these objectives, enemies will have wandering patrol units searching for you. When the units find you, they call in reinforcements. You can usually outrun enemies - except in snow and swamp levels where your speed is impeded by the terrain - but when you are at an objective the only option is to turn and fight. Making the call to flee or to stand your ground is important in Helldivers, and not always an easy choice. 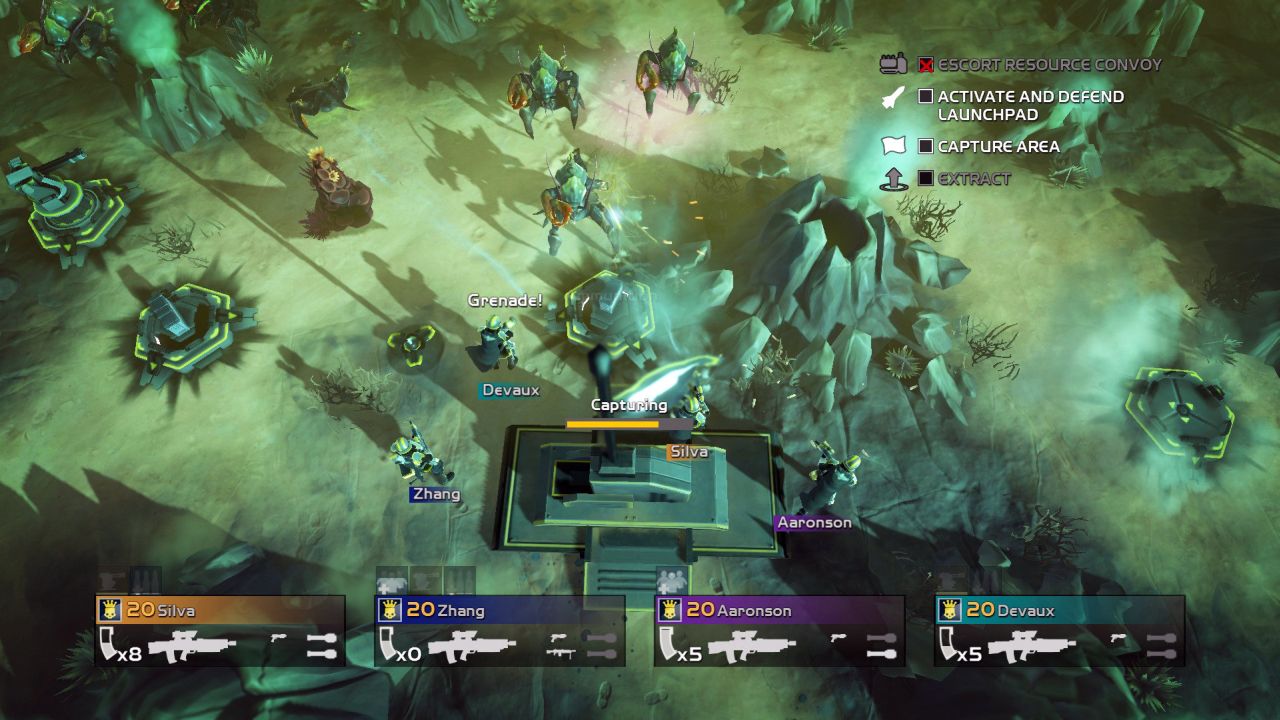 The size of the maps, complexity of the objectives, and nastiness of the enemies is dependent on the difficulty setting you’re playing on - of which there are many. Rookie players can start off completing the incredibly easy Dive in the Park levels, while a foursome of veterans are going to be facing impossible odds with the Helldive difficulty.

No matter which level of difficulty you are playing on, you’ll have to watch out for friendly fire. Much like Arrowhead Game Studios’ other beloved multiplayer title Magicka, Helldivers is a game where your friends are often as deadly as your foes. Instead of a shoot first, ask questions later kind of an action game, Helldivers forces its players to be thoughtful, restrained, and conservative. Laser sights and flashlights that allow you to see where you’re aiming become immensely important as you always want to make sure your teammates have cleared the line of fire before pulling the trigger.

This conservative influence of gameplay carries over into other aspects of Helldivers as well. Completing objectives, resurrecting teammates, and calling in special attacks all take time to perform and when you have a horde of mutant bugs breathing down your neck, you don’t often have time to complete these tasks. Players are forced to try and think one step ahead. Need an ammo drop? You better take advantage of a quiet moment to get it called in. Need a special gun? You better call it down before enemies find you.

But Helldivers aren’t outgunned on their missions. Not only do they have their standard rifle and sidearm, but they also can call in the previously mentioned Stratagems. Stratagems are aids in the fight that can range from extra ammo to a tank. But these special drops can backfire. Turret guns can accidentally mow down other Helldivers when aiming for enemies; giant mechs can squash allies who accidentally get in the way - and even the incoming drop pods themselves can always crush Helldivers and enemies alike when they land on the map. But Stratagems are essential tools during missions. Players call for these items to be sent by opening a menu with the left bumper, then entering in a series of ups, downs, lefts, and rights. As you level up and complete more campaigns, you can call down these items more quickly. This leads to exciting moments where teammates try to hold off enemies while you call down an important piece of equipment, resurrect a teammate, or complete an objective. 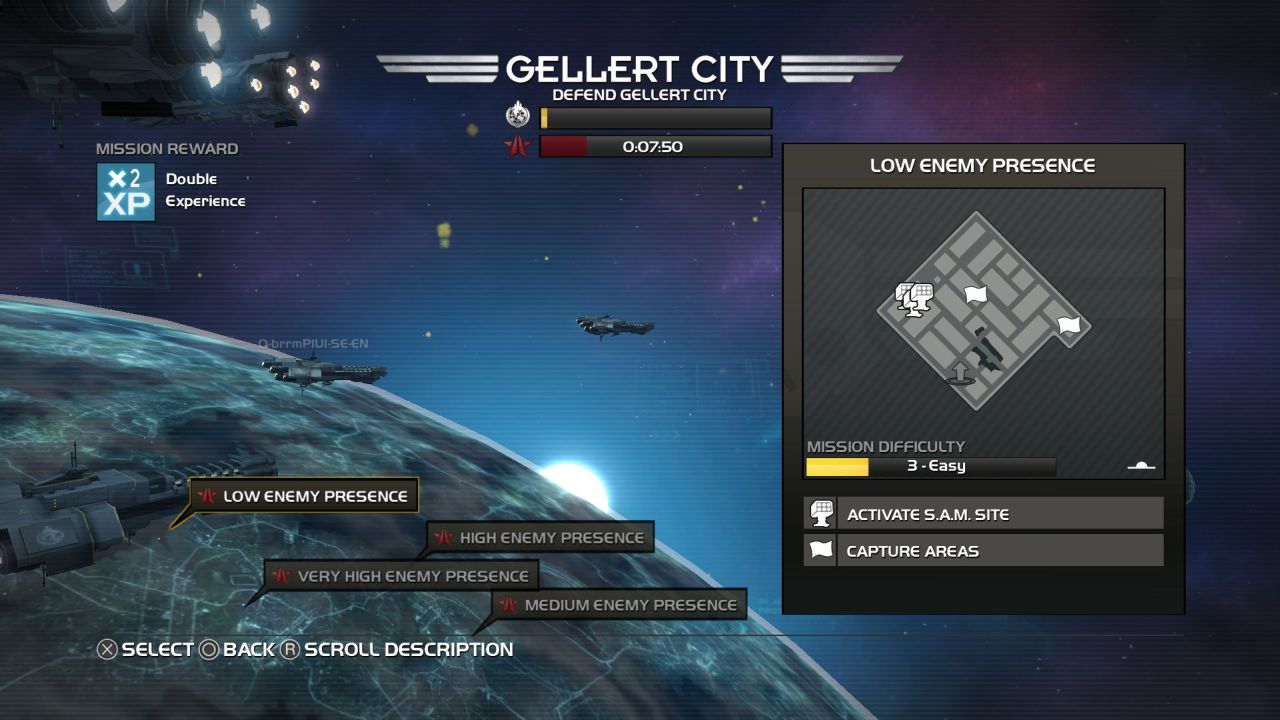 The gameplay balance of Helldivers is very much dependent on the amount of people you are playing with. The game doesn’t seem to outright scale to the amount of players involved, but more players are likely to get the attention of patrols. The fewer people you have, the easier it is to avoid enemies and stealthily navigate the map, although it gets pretty hard to play by yourself due to the complexity of some objectives. Of course, more people also means that you can end up with more chaos. The extra firepower increases the likelihood of getting hit by teammates, and it’s impossible to make an escape unless all four Helldivers agree to make a break for it.

Aside from the entry video, there’s not much context given to Helldivers’ narrative, but the game has a persistent world where the war of man changes based on the actions of the community. As the Helldivers wage war with their three different enemies - the bugs, the cyborgs, and the alien Illuminate - territory can be gained and lost based on the missions completed by players. Occasionally, special events will pop up and cities will need to be defended or special attacks will be performed. It isn’t much, but it does give you a sense of purpose and an overarching goal.

In-between missions you can choose where you want to help the war effort and also upgrade your weapons, perks, and Stratagems. It’s a simple upgrade system and sometimes a frivolous endeavor as I would find myself with skill points I didn’t quite know where to spend, or new Stratagems I wasn’t interested in using. But it all adds up to Helldivers’ larger mechanics.

You can also play Helldivers on all three PlayStation platforms - PS3, PS4, and Vita - though the Vita experience does suffer. While the game often runs smoothly on the PS4 and the controller microphone is well used in a couple of cool ways, on the Vita’s touch interface the game didn’t always register my commands. The Vita version is nice, but Helldivers’ complex controls work best with a more traditional controller layout. The game is also designed to allow for cross-platform co-op, but it’s been a struggle getting this to work. 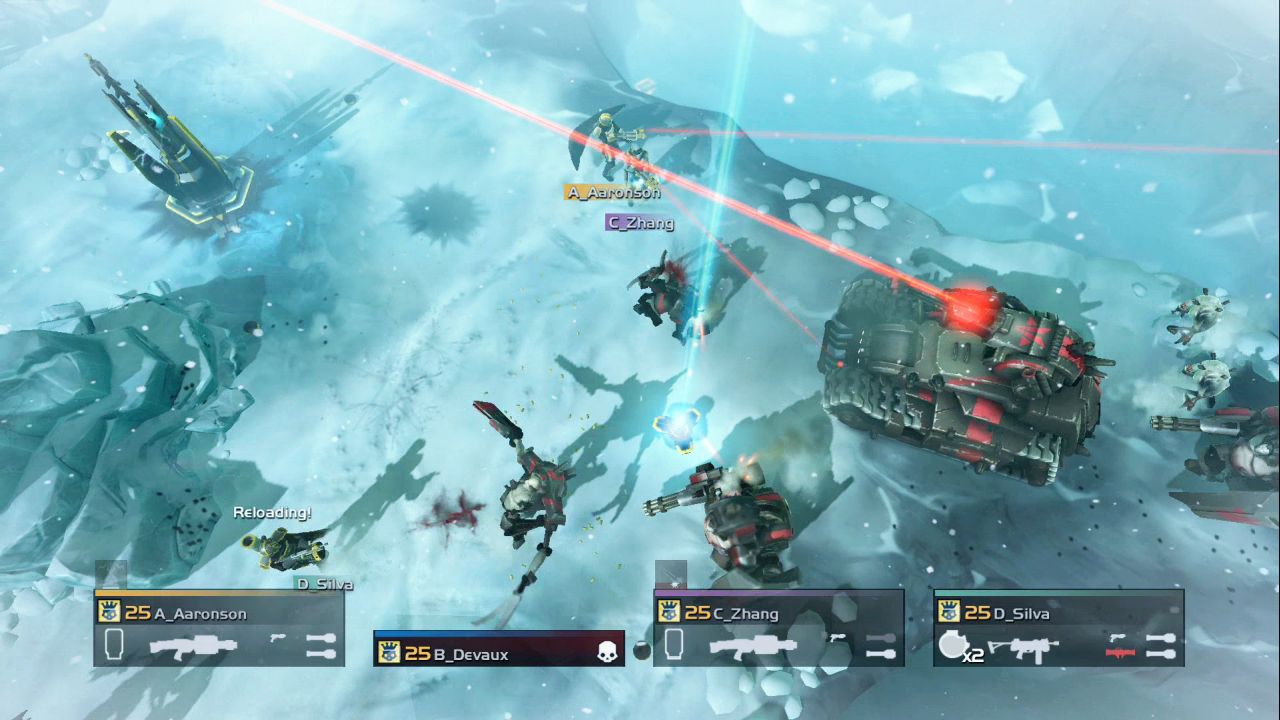 Perhaps the most disappointing element to Helldivers is the lack of matchmaking. If you don’t have friends online and don’t want to play alone, players have to navigate a menu which shows all on-going Helldiver matches. Players manually scroll through these matches, find one which they like, and attempt to join it. If you fail to connect - which happened to me many times - you are back to scrolling through the list of available games, manually refreshing to find something appealing. This process feels archaic and unintuitive, like a server browser you'd find in an old PC game. Oftentimes, I was forced to compromise on the difficulty I wanted to play at because I couldn’t find a game with an open spot at the level I was searching for. For a game that greatly revolves around multiplayer, it feels odd that the title doesn’t have an automatic matchmaking system.

Technically, Helldivers is a mixed experience. Again, loading into games can be annoying, as I would select a game to load into, let the console think for a bit, then be sent back to the list of available games to join. This always happened a few times before I could find a game. Once I was in a game, the experience usually was smooth. There would be the rare frame rate drop or lag issue, but these happened very infrequently.

Helldivers isn’t a game with a ton of depth, and its mission structure of clearing objectives then spending your rewards can get a little dull after a couple of hours. It’s hard to imagine grinding away at the game for extended periods of time, but in short bursts it is quite fun. Logging in each day to see how the war has changed and how you can help the cause creates a daily gameplay loop that keeps you invested. With a low $20 price tag, Helldivers is reasonably priced for the experience it's offering. Helldivers is not overly robust and has a share of flaws, but more often than not there is plenty of fun to be had. So grab some friends, load up, and do your part for Super Earth.

Our ratings for Helldivers on PlayStation 4 out of 100 (Ratings FAQ)
Presentation
72
Helldivers' Starship Troopers homage is simple and serviceable.
Gameplay
86
The conservative nature of Helldivers’ action makes for a fun experience. Its maps and objectives are well designed and the game can be as simple or as challenging as you want.
Single Player
68
The narrative isn’t very deep, but it begs you to keep coming back day after day to see how the war effort is progressing. Playing by yourself can get unfairly difficult as you advance in level.
Multiplayer
79
Helldivers is designed to be played with 2-4 people. The chaos of avoiding friendly fire, completing objectives together, and reviving teammates all bubbles into a thrilling experience. If only the matchmaking was better.
Performance
73
Rarely did I have frame rate drops or experience any lag, but loading into game can be annoying as you will have to try a few times before getting into a game.
Overall
76
Helldivers can be quite fun, and the experience is so fine-tuned that the issues it does have - like matchmaking and the occasional frame rate issues - stand out like sore thumbs. 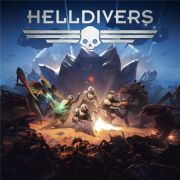 Our Review of Helldivers
76%
Good
The Verdict:
"An enjoyable cooperative top-down shooter"
Game Ranking
Helldivers is ranked #740 out of 1842 total reviewed games. It is ranked #48 out of 110 games reviewed in 2015.
739. Dragon's Crown
PlayStation 3
740. Helldivers

All videos for Helldivers (2)
Advertisement ▼