KIRBY AND THE RAINBOW CURSE
Platform: Wii U
75
SummaryNewsArticlesVideoScreens

Kirby and the Rainbow Curse Review

An enjoyable little platformer with a unique spin; though a tad basic

Nintendo often thrives when utilizing new and innovative means of control and gameplay concepts. This is certainly demonstrated in the latest Kirby installment for the Wii U, Kirby and the Rainbow Curse. Fans of the similar Kirby’s Canvas Curse on the original DS almost a decade ago will quickly find the resemblance in this otherwise unique platformer, as it uses the same concept and control method that the DS game so heavily relied on. While the DS iteration in 2005 was a strange new direction for the Kirby series, this spiritual successor for the Wii U takes this interesting formula of drawing paths of rainbow rope on the touch screen to move Kirby, and creates a somewhat more fleshed out, visually appealing, and overall improved game that is at least serviceable for quick doses of platforming fun. 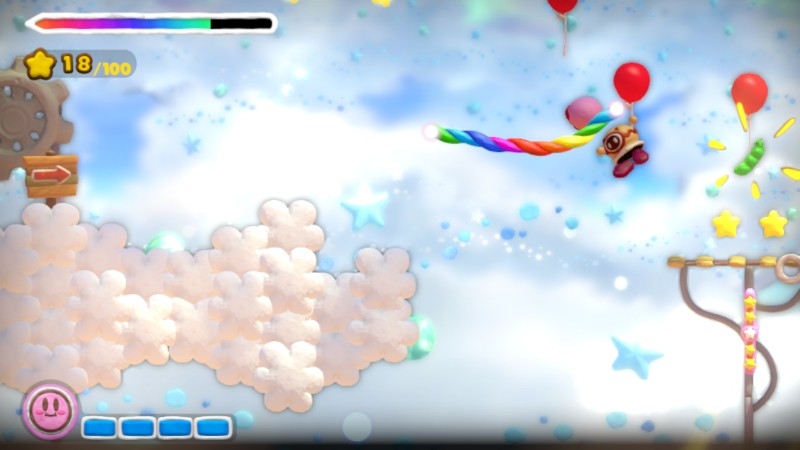 The backstory to this adventure is about as basic as the gameplay itself; though I don’t necessarily have qualms with this, as a platformer is - and should be - more about an interesting control scheme and core gameplay rather than the extra fluff of a deep narrative.

The ever-familiar Dream Land is a colorful and carefree place as we see our lovable pink ball of clay, Kirby, playing with his old time buddy, Waddle Dee, when they are interrupted by the evil Claycia, who apparently has the power to suck the color right out of entire worlds. She does just that, and Kirby is guided by Elline, the magic paintbrush fairy, into the galaxy where he (and Waddle Dee if you opt for the multiplayer) is forced to fight through hordes of Claycia’s clay-molded baddies and bring color back to Dream Land. It may sound a little silly, but then again, so is the concept of drawing clay streaks of rainbow paint in the air and using it as a track to guide your hero.

The graphical style is as unique and appealing as the controls, making you feel as though you are playing through a stop motion animation. The crisp and colorful detail of the claymation provides an enchanting visual experience that certainly keeps your attention throughout. Unfortunately you don’t get to experience much of these great visuals, as you spend the majority of your time honed in on the smaller and less visually stimulating touch screen of the gamepad. The variety in worlds is a bit typical, adhering to the "glass land, desert land, water land" formula, though they do grow somewhat more interesting and diverse as you progress.

After a few mindless scribbles on the Wii U’s controller as you scramble to figure out what is happening in this game, the control scheme becomes relatively easy to wrap your head around. Drawing streaks of paint underneath your spherical hero to keep him rolling is a breeze for the most part, and makes for an enjoyable experience overall. If you haven’t played the aforementioned DS Kirby title, you may find it to be a strange concept, but the learning “curve” is pretty “straightforward” regardless (if you’ll excuse the lame puns). 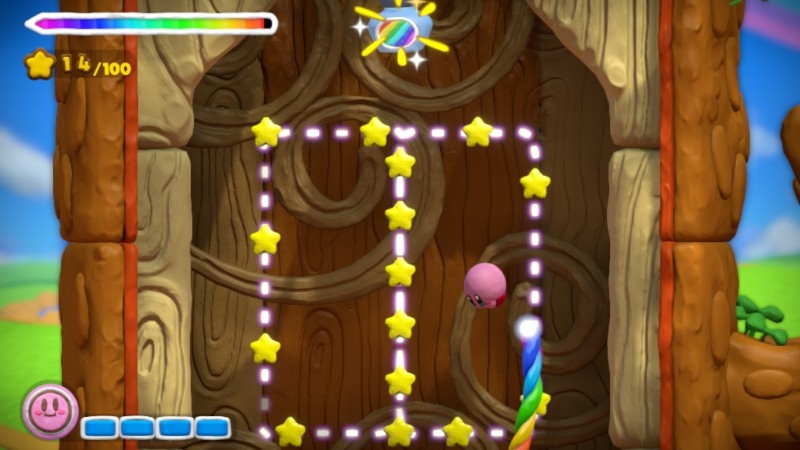 Rainbow Curse also breaks the monotony of simply guiding a rolling ball across the screen by offering certain variations of vehicle “forms” that Kirby takes on, each utilizing unique mechanics of their own, similar to Yoshi’s Island on the SNES. These concepts feel more like gimmicks, but they do provide some amusement, and at the very least help keep up the pacing of the game which borders on stagnant and dull at times. You get to play as a submarine, a tank, and even a rocketship. While these mechanics take a bit more time getting used to, and can be a tad jarring after playing several levels in the traditional manner, it is still no sweat getting acquainted with the mechanics for the most part.

There is also the neat feature of gaining a super-powered giant Kirby that can plow his way through just about anything, making it far easier to progress and rake in those stars while taking out baddies. This is a blast to use, though it can catch you off guard at times, especially when Kirby occasionally decides to launch his way off screen - making it difficult to retrieve him until your special attack frustratingly wears out.

You also have the opportunity to team up with a few friends, who, unlike our main hero, actually possess the ability to walk. As Waddle Dee, your friend(s) can give you a hand by skewing enemies with their spear, or can even carry Kirby about, giving your drawing hand some rest. The multiplayer not only makes for a helpful addition, but provides an extra element of fun and keeps the game fresh. It is however a tad slow-paced and dull at points, particularly during portions where the enemies are lacking in number. 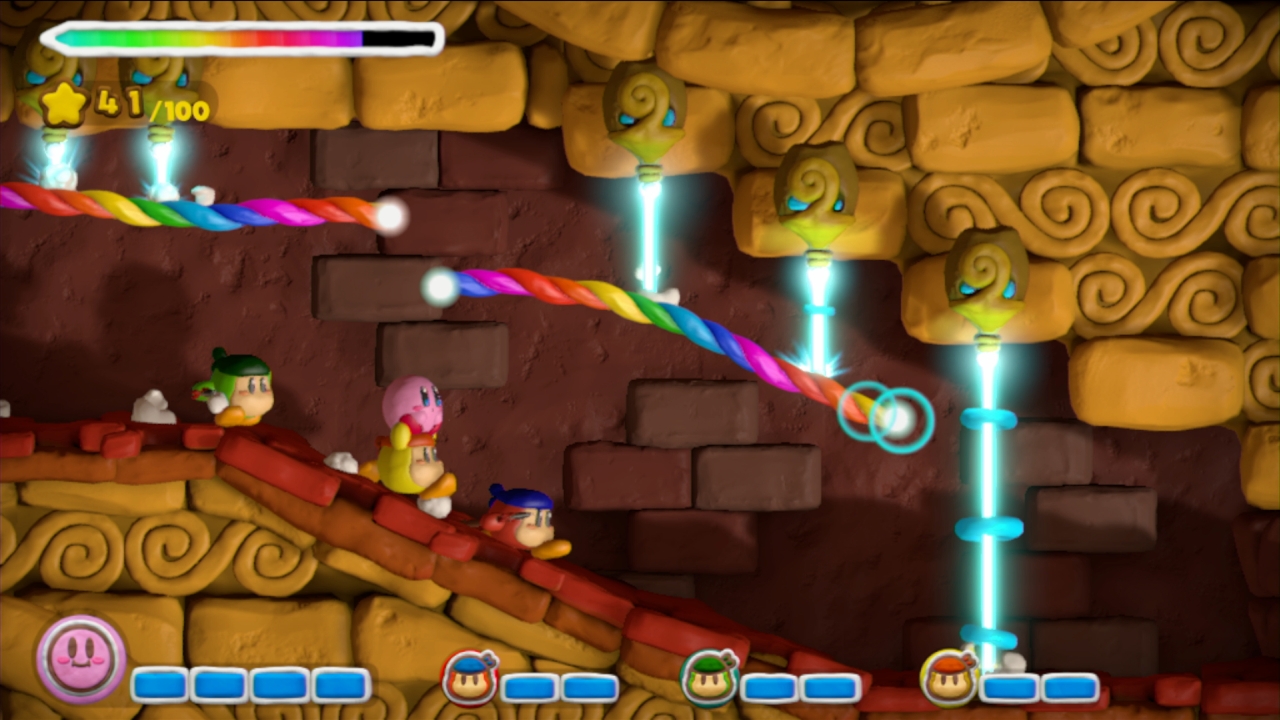 The multiplayer does feel a bit unnecessary, since even by your lonesome, you are eased into a pretty steady and simplistic gaming experience that doesn’t provide many intense trials and tribulations, particularly in the first couple of worlds. While this game does prove to be a bit more tricky than the infamously simplistic Kirby’s Epic Yarn on the Wii, it nonetheless is one of the easier platforming games I’ve played. I found myself spending very few lives up until the final couple of worlds, and even this was mostly thanks to me getting greedy and attempting to earn gold medals while snagging every treasure chest that was scattered throughout the colorful clay worlds. Healing fruits are plentiful throughout the somewhat brief stages, and opportunities for a quick, unexpected death are scarce.

Speaking of the medals and treasure chests, I did appreciate this addition as it certainly provides a bit more depth and replay value. You will often find yourself itching to replay a stage just to collect that tricky treasure chest that you were oh-so-close to grabbing during the first run. The medals and chests also directly provide for more gameplay, as they will unlock various challenges that you can play throughout. The challenges, which are essentially recycled and rearranged bits from the main stage challenges, similarly make for a lengthier experience and add some more variety. Yet, they do little to offer much in the way of rewards by themselves, as you are generally only treated to pointless unlockables like music tracks and figurines.

With that said, Kirby and the Rainbow Curse truly shines not with depth, complexity, or unlockables, but rather with pure and simplistic gameplay that most anyone can pick up and play. It does border on being a little too simplistic at times, and I couldn’t help but feel as though I was playing through a glorified mobile game in various spots. But sometimes it's refreshing to have a relaxing gaming experience that doesn’t make you want to throw your controller at the TV, and Rainbow Curse certainly fills in that role. Ultimately, while it is nothing mind-blowing, and a bit shallow at times, Kirby and the Rainbow Curse is still a charming and enjoyable platforming experience that is definitely worth taking for a spin, especially considering it comes with a lower-than-usual $40 price point.

Our ratings for Kirby and the Rainbow Curse on Wii U out of 100 (Ratings FAQ)
Presentation
82
The charming claymation style works quite well, and is further enhanced by the cheery tunes throughout. There is nothing that screams “next gen”, but for what the game is going for, it pulls off quite well.
Gameplay
72
The platforming elements and unique control are easy to get used to, though can grow a bit stale at times. Thankfully, the diversity in powerups and challenges helps to add some excitement. Some of the worlds could be a bit more imaginative.
Single Player
78
The campaign is enjoyable and never overwhelming, albeit a little short and light on content, even with the challenges and unlockables.
Multiplayer
70
Certainly adds a fun new spin on the game, and is helpful for the most part, though it is noticeably more slow-paced than your typical New Super Mario or Donkey Kong Country platforming experience.
Performance
80
The game runs quite smoothly with few hiccups outside the normal bit of choppiness, which I assume was intentional to adhere to the stop-motion style. I did occasionally find myself getting stuck off screen while in rocket ship form, but this wasn’t a major issue.
Overall
75
Kirby and the Rainbow Curse is a fun little title that doesn’t bring a ton to the table, but what it does offer, it executes quite well. A good game if you’re looking for short bursts of platforming fun, just don’t expect anything epic in scope. 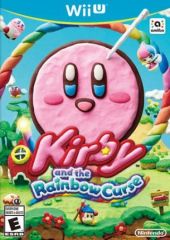 All videos for Kirby and the Rainbow Curse (2)
Advertisement ▼