The Legend of Korra Review

The legend of Korra could have been so much more. And easily so. Dedicated fans of either the show or Platinum Games, the developers of this title, will find some simple enjoyment here, but I can’t recommend it to the masses and that makes me very sad to say.

The Legend of Korra is an action game, a straight up beat-‘em-up – a genre that lends itself well to the Nickelodeon TV show of the same name, and its prequel series, Avatar: The Last Airbender. In this rich and expansive fantasy world, many people have the power to manipulate the elements in a special type of martial arts called ‘bending’. A single, reincarnated being, the Avatar, is the only person able to bend all four elements. The titular character, Korra, is the current Avatar, and the prospect of playing as her and unleashing powerful and beautifully choreographed attacks, as seen in the cartoon, is an enticing one. Coming from the makers of Bayonetta and Metal Gear Rising: Revengeance, it could only go one way, right? 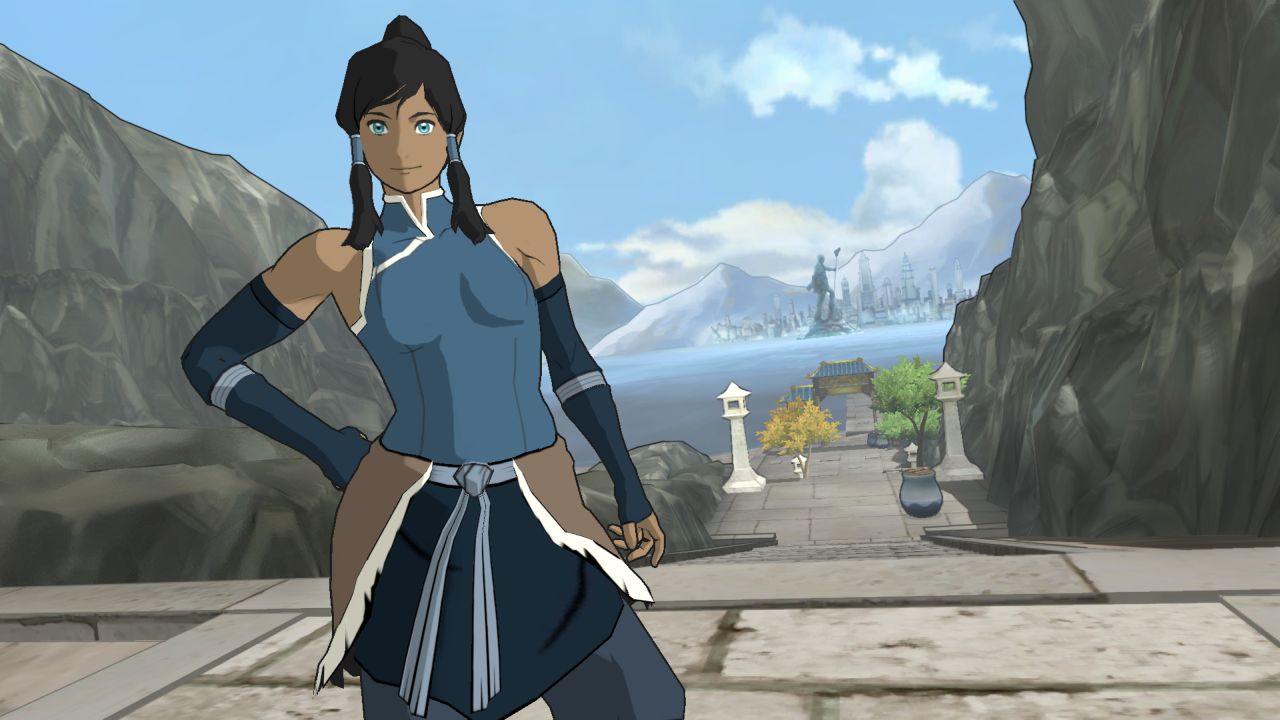 Wrong. Or at least, mostly. You see, Platinum Games, who have an outstanding record of action games in their back catalogue, seemingly sent in the B team to whip this licensed package into shape in as timely fashion as possible. This could have been due to publisher Activision wanting a quick turnaround, a lack of budget or any number of things, and we’ll likely never know. But the truth of the matter is that Korra feels completely under-baked.

They’ve nailed the art style, capturing the look of the show, but where’s the minute details, the varied locations, and the full cast of characters that make the series so great? Same with the combat – the basic use of fire, earth, water and air look and feel great, but there’s no depth. And as for the story, we are in simple one and done, filler country here. Considering Platinum worked with the writers and voice actors on the show, and that the few cutscenes here look exactly like the cartoon, it’s such a shame that the plot employs so few characters and seems so bland. When I think of Korra or Avatar, I think of mystery, intrigue, plot twists and charming, realistic characters. I’m sorry to say that none of these made their way to the game and I just don’t understand why. 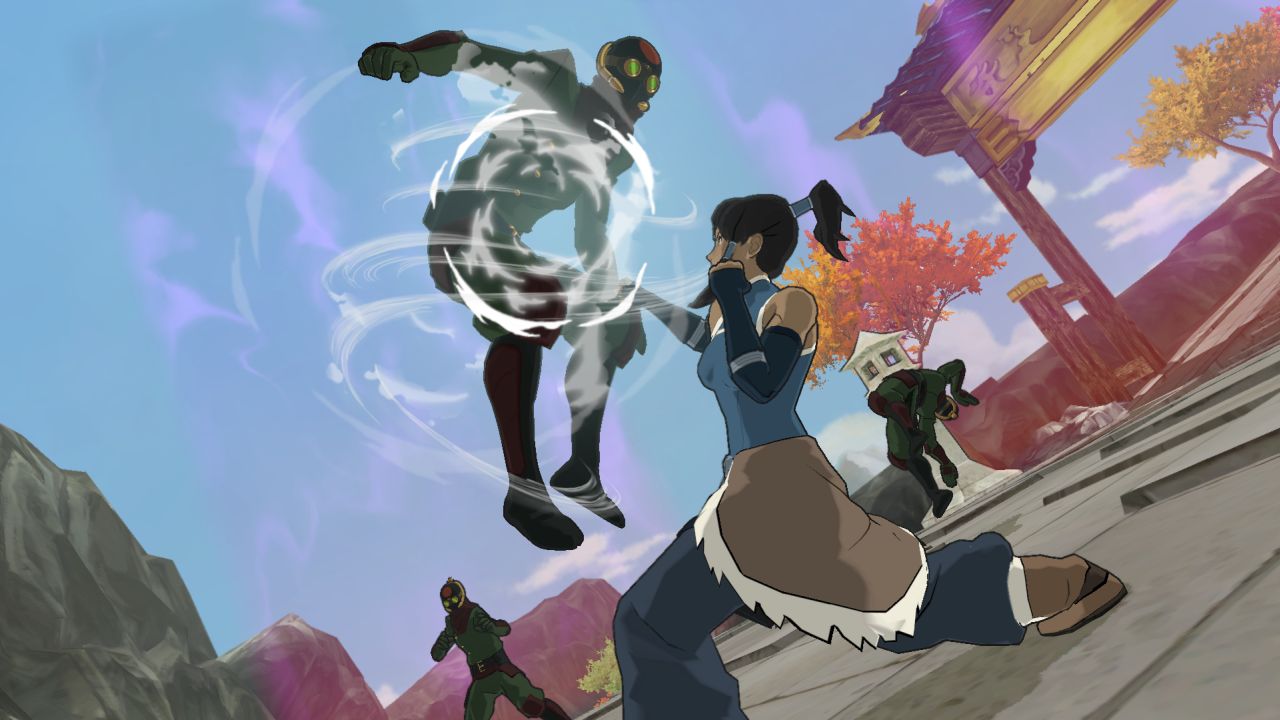 Set between Season 2 and 3, Korra has opened the portals to the spirit world and has reached new heights with her powers. In true video game style, however, her bending ability is stolen by a creepy old mage who feels out of place in the Korra universe. He’s somehow linked with the chi blockers from season 1, but unless you know the show inside out, the story is quite impenetrable, making little sense without proper context. However, the set up does the job well enough – it’s just disappointing that the charming and funny characters like Mako and Bolin only show up at the beginning and end, with the likes of Tenzin nowhere to be seen, and Jinora only turning up as a spirit guide of sorts to help Korra reclaim the four elements over the course of the story. Where’s the wit and heart that make Korra’s journeys so meaningful? After the intro, it’s a simple case of chasing down Old Crazy Guy because he’s evil or something, spirit blah blah this, and maniacal laughter that.

Having said this, the combat in Korra is halfway decent, and the fact that Platinum have managed to make us feel even a bit like the Avatar is no small feat. Players can swap between the four elements (once they’ve unlocked them) by tapping L1 or R1, using Square for a regular attacks and Triangle for a heavy move. It’s simple, but there are different combos to pull off and the attacks at least look impressive. There are Bayonetta-style counter and dodge moves too, with a quick tap of L2 or R2 respectively, which all works well enough. What I found somewhat disappointing, though, was the lack of level and enemy design in which to cleverly use each of the elements. Pretty much all four elements work similarly enough, except water has a further range and air – once you finally get it – is great for crowd control. In fact it’s so powerful, I barely used the others once acquiring it. What I had hoped for was specific enemies and puzzles that required thought and tactics, forcing me to switch elements on the fly, keeping me on my toes, but sadly this only appears in the final boss encounter, and even then in a limited way. 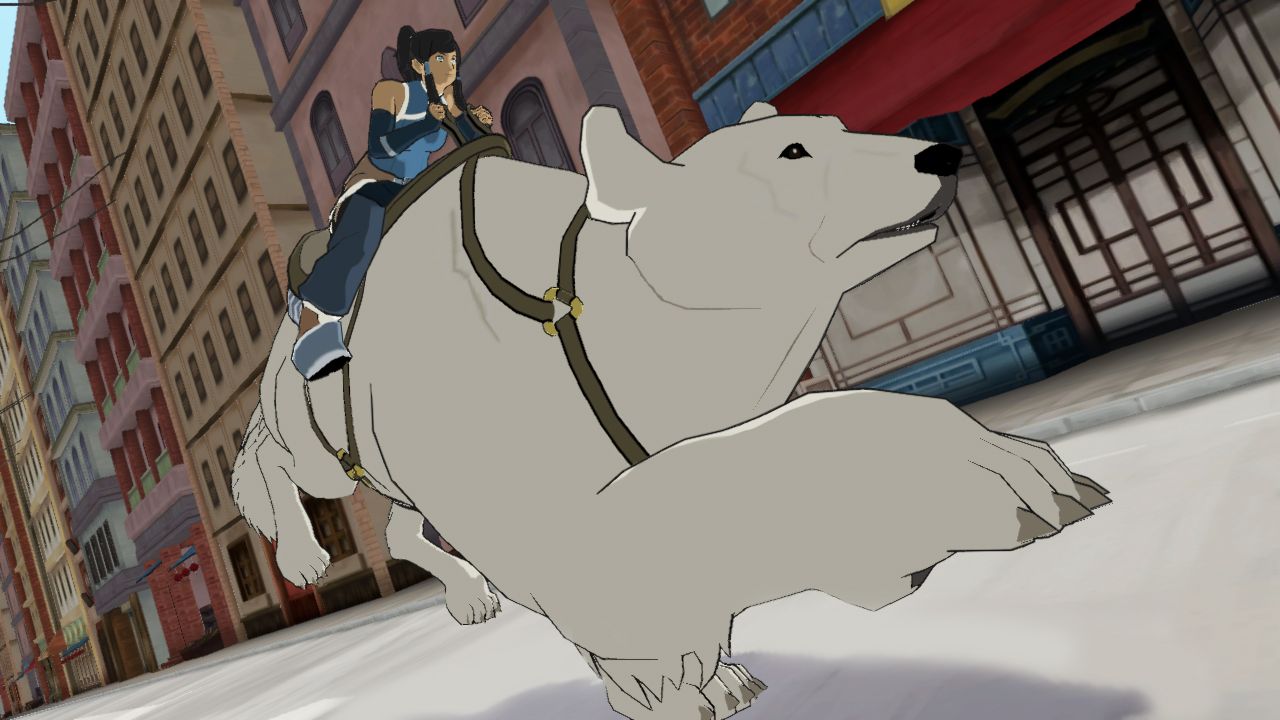 Between the monotonous corridors of enemies to beat down on, there is the occasional endless runner section wherein Korra rides on the back of Naga, her Polar Bear Dog. At first I thought sure, why not, but it looks jarring, makes little sense and feels like something that would be in a cheap mobile tie in. There’s even a boss fight in this mode near the tail end of the game that really tested my patience, and in fact, on normal, there are several sharp spikes in difficulty throughout the game that might put off younger players. Seeing that this demographic are the ones Korra would probably appeal to the most, it’s a shame I can’t even recommend it to them with such a high barrier of entry.

Outside of the short, four-hour or so story mode, there is a pro bending minigame, lifted right out of Season 1. I was pleased to see this included and it’s fun for a short spell, but really there isn’t enough variety or tactics needed to keep you coming back for long.

And that’s it. Eight repetitive stages, interspersed with an endless runner and a minigame on the side. It’s such a shame because at the core Platinum have got it right; the looks, the mechanics, the cutscenes. This could have been an amazing tie in to an amazing series, but somehow, the heart of the show was left on the cutting room floor – and with a little more time and love, I reckon it could have found its way through. C’est la vie.

Our ratings for The Legend of Korra on PlayStation 4 out of 100 (Ratings FAQ)
Presentation
70
A fine, clean looking game that captures the essence of the show, although the locales are a little drab, lacking the finesse and attention to detail the cartoon is known for.
Gameplay
50
A relatively solid set up for a brawler, but it’s too repetitive and the endless runner sections fall flat.
Single Player
50
Four hours with little replay value make it a tough sell. Where is the exploration, puzzle solving and gameplay variation the world of Korra would lend itself so well to?
Multiplayer
NR
None
Performance
60
Looks fine and runs reasonably well, but it’s not pushing any modern tech and the camera can’t always keep up.
Overall
55
A serviceable adaptation on the fighting side of things, but where’s the charming characters, story and heart of the Korra TV series? I don’t know, but it’s certainly not here. Sorry folks.

The Legend of Korra 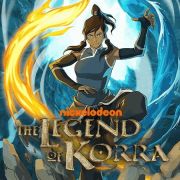 1511. The Technomancer
Xbox One
Related Games