Hyrule Warriors, the latest franchise mash-up of long running beat ‘em up series, Dynasty Warriors, suffers deeply from an identity crisis. Who asked for this collaboration in the first place? Certainly not the Zelda fans, but ultimately that’s who this is aimed at, and unless you know what you’re getting yourself into, expect to be disappointed. 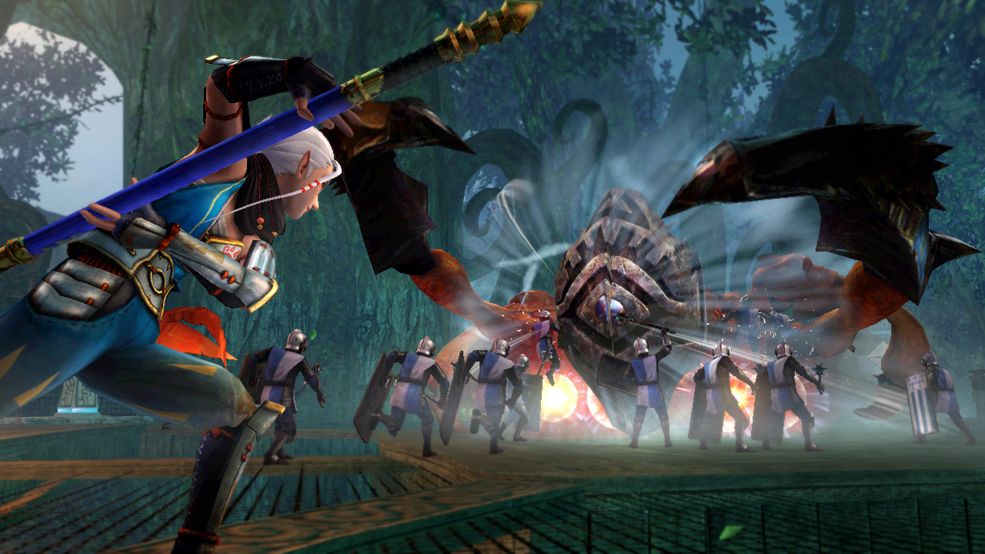 As with the One Piece and Gundam themed Dynasty Warriors games that came before it, Hyrule Warriors is the same hank ‘n’ slash template with a thin veneer of Zelda smeared on top. That’s not to say the Zelda elements aren’t plentiful – the level of fan service on display is both remarkable and morally questionable – but it’s just that, fan service. If you’re expecting an epic Zelda adventure with many different types of gameplay and puzzles, I’m afraid you’re in the wrong place. If, however, you love Zelda enough that the prospect of bashing literally thousands of enemy NPCs for hours on end sounds inviting, come on in. They made this for you.

I for one am a huge Zelda fan. Played every game in the series, will undertake any adventure and even enjoyed the lesser titles such as the DS games Phantom Hourglass and Spirit Tracks. However, my fandom does not stretch far enough to see this as anything other than what it is, and unfortunately I find Dynasty Warriors to be incredibly bland and monotonous.

That’s not to say there’s no fun to be had. Playing as Link or any of the thirteen characters pulled from throughout the Zelda timeline can be incredibly rewarding and satisfying, at least in small doses. When doling out awesome melee attacks, magic spells and the all-consuming ultimate moves – that send hundreds of enemies flying into the air, and subsequently their doom – you can’t help but feel like a supreme force of nature, a one man (or woman) army, capable of turning the tide of any battle. 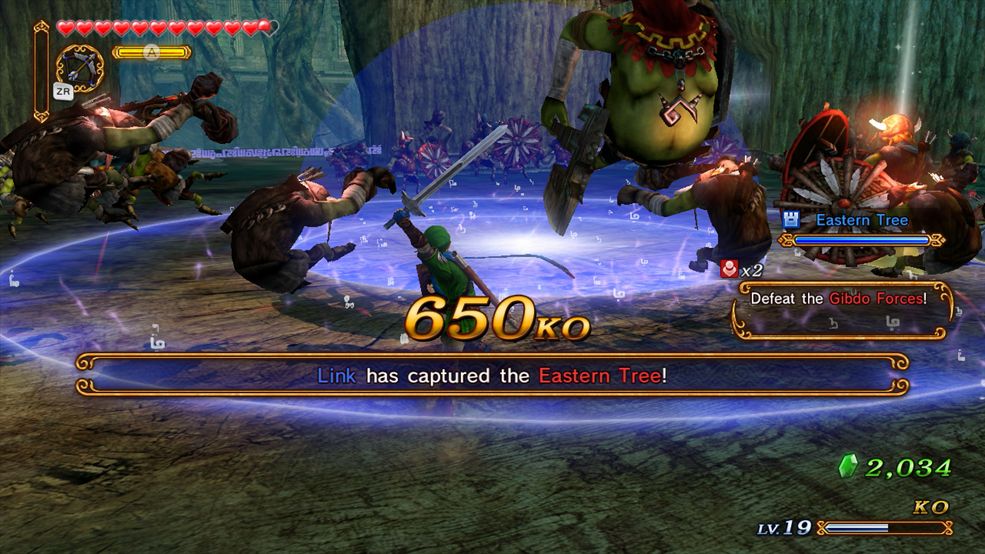 As Dynasty Warriors vets will know, the basic battle structure is that of a large map with many keeps dotted around that you have to either protect or reclaim from enemy factions. These are square rooms full of enemies that, on your map, are seen as either red or blue, indicating which side currently has control of them. The most important of these is your allied base which, if taken, indicates game over. Many stages end with huge boss battles – again lifted from the core Zelda titles – and these were tense, engaging moments wherein I had to decide whether to try and finish the boss, thus ending the mission, or retreat to save my allied base from invasion. These moments are what lifted Hyrule Warriors for me, and kept my mind from the repetition and the grind.

There’s an attempt at a story that would like to be seen as credible in the already bloated and confusing Zelda timeline, which relies on interdimensional tomfoolery to bring characters such as Ocarina of Time’s Darunia, Twilight Princess’ Midna and Skyward Sword’s Impa all into one narrative. As fun – and downright ridiculous as this all is – it’s the non-Zelda parts of the plot that make it feel off, as if something isn’t quite right. First off there’s newcomer goody goody, Luna, any and every anime cliché, bobbing about cheerfully with exposed midriff and blue ponytail. But more worryingly there’s a busty seductress of a sorceress, who wants to wield the Triforce in order to make Link love her. She even has pictures of him hanging up in her castle. Yeah.

Outside of the main game and story mode there’s an interesting time sink in adventure mode. A tile-based recreation of the original NES Zelda’s overworld, representing many individual challenges and tasks that are then undertaken on levels from the main story of Hyrule Warriors. These challenges include the like of ‘Defeat 500 enemies in 10 minutes!’ which aren’t wholly interesting or original, but kept me coming back for a short while in order to unlock new characters and special weapons. 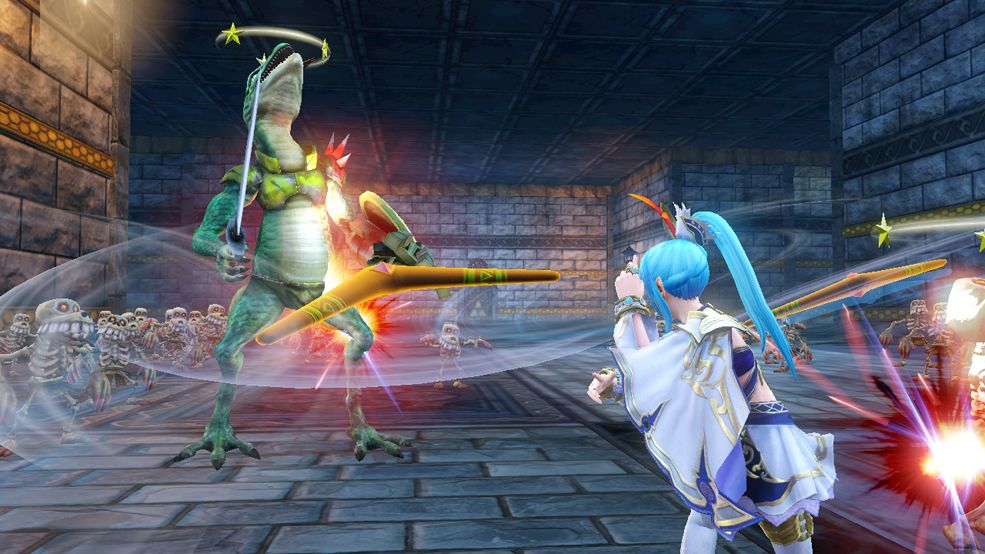 There’s also a co-op mode with one character playing off the TV and one off the Gamepad, which would be quite fun in theory, and perhaps break up the monotony, allowing you to share and split objectives; but the frame rate takes such a dip, along with fuzzy jaggies popping up left, right and centre, that it become entirely unworthy of your time.

It’s undeniable that playing as the likes of series villain Ganondorf for the first time outside Smash Bros is a win for Hyrule Warriors, but even with the many Zelda weapons, treasure chests and heartwarming jingles, Hyrule Warriors never quite catches the series charm, and therefore sits in this weird limbo where I honestly wondered who it was for. As far as Dynasty Warriors games go, it’s one of the most polished, but it’s the same gameplay again and with less content than fans of that series are used to. And as for unassuming Zelda fans who pick this up, expecting the normal, triumphant quest for the Triforce, well, as previously said, they won’t find it here.

If you’re sitting somewhere in the middle, however, and think a solely action based Zelda game with slightly tedious but ultimately empowering combat seems like a good time, then maybe this is for you. There are parts of Hyrule Warriors that are fun and dynamic, and make me wish it was for me too. Maybe next time then, but I won’t hold my breath.

Our ratings for Hyrule Warriors on Wii U out of 100 (Ratings FAQ)
Presentation
70
A good looking game, particularly the character models, but some arenas are quite drab and uninspired and the graphics take a serious hit in co-op.
Gameplay
60
A solid hack ‘n’ slash of the Dynasty Warriors template, although don’t expect anything more.
Single Player
60
A repetitive 10 hour campaign, followed by some interesting side activities such as adventure mode.
Multiplayer
50
Great in principle, but the game can’t quite keep up in co-op, slowing down and becoming quite jaggy.
Performance
60
Fine in single player for the most part, although often the game’s dialogue can’t quite keep up with what you’ve accomplished, and some rooms spawn more enemies after you thought you’d killed them all, just because they couldn’t all be on screen at the same time.
Overall
60
A fan service skin of a Zelda game, however good, is still just an impersonation. It’s a mix that only occasionally works, and more often than not simply feels repetitive and out of place. 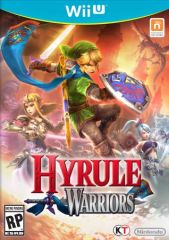 All videos for Hyrule Warriors (5)
Advertisement ▼