CHILD OF LIGHT
Platform: Xbox 360
80
Reviewed on Wii U
SummaryNewsArticlesVideoScreens

Last August, Ubisoft and director Patrick Plourde unveiled the surprising fantasy-JRPG, Child of Light. With the game’s unique watercolor aesthetic - created using UbiArt Framework - smaller team, and digital release, Child of Light felt like something you would expect from independent developers, not the publisher behind Far Cry, Assassin’s Creed, and the wealth of games bearing the Tom Clancy name. While Child of Light might be a surprise out of Ubisoft, it is worth marking its release in a couple weeks as the time I spent with the game was truly magical.

As I waited to get my hands on the JRPG, I got a chance to speak to writer Jeffrey Yohalem, the writer of the game. Yohalem and Plourde share a history, having worked together on the aforementioned marquee Ubisoft franchises. I asked Yohalem about the transition from Far Cry 3 to Child of Light. “[Child of Light] is certainly more difficult,” the writer explained. “I have always wanted to tell a story about a young girl coming of age."

When I asked if working on a JRPG was something that interested him, Yohalem pointed back to his creative partner, “Patrick always wanted to make a JRPG, I always wanted to tell a story about a little girl.” 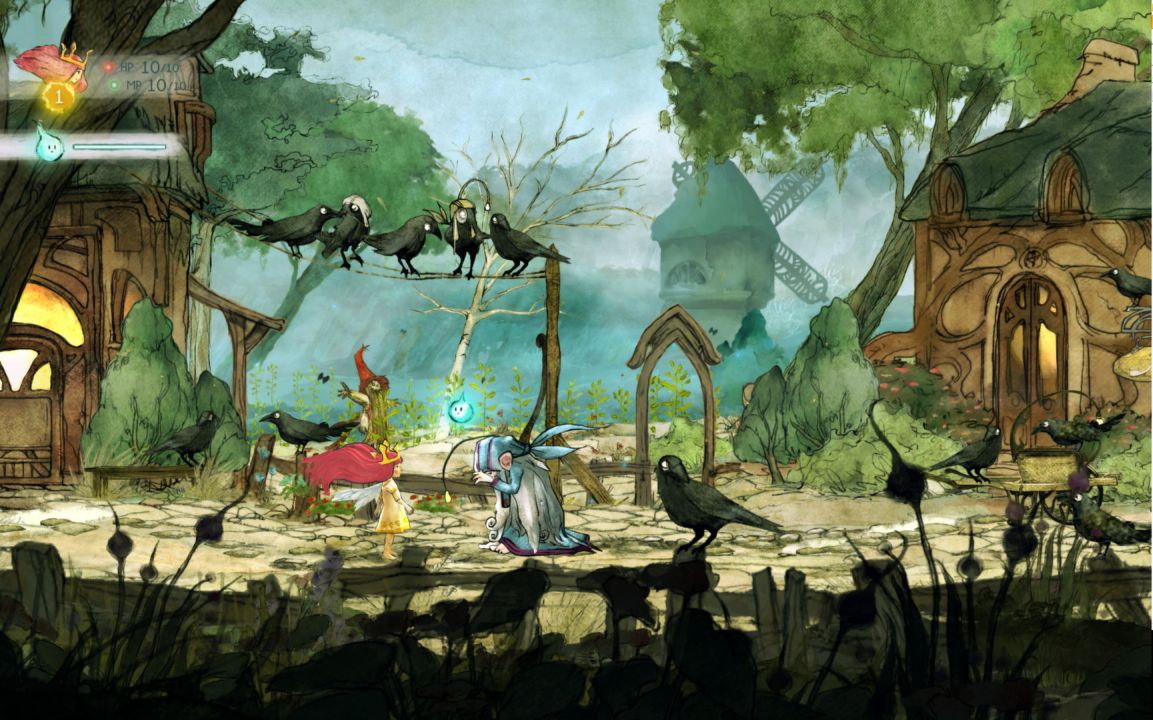 The little girl Yohalem refers to is Aurora, the protagonist of Child of Light. In the opening cutscene of the game, Aurora passes into the world of Lemuria where she must defeat the Dark Queen - who has stolen the sun, moon, and stars - and set things right before returning back home. She is accompanied by a floating ball of light and guided by mysterious characters who inform her of her destiny. If she saves Lemuria, she will wake up and return to her world and awaiting father.

“Patrick came to me and asked what the words, ‘Child of Light’ meant to me,” Yohalem explains, his hands animated with passion, “I thought of the coming-of-age story.” I mention a few examples, but Philip Pullman's’ His Dark Materials trilogy, seems to strike Yohalem the most.

Not only does Yohalem craft a coming-of-age story, he writes the whole thing in verse, a daring choice. So often poetic writing, especially in dramatic works, can feel forced, but Yohalem weaves his words in between characters in impressive organic fashion. The meter is well paced, the rhymes are surprising and funny. So often writing in verse can be a prison, something which traps writers, limiting their creativity, but Yohalem’s dialogue nimbly circumvents these snares.

While the narrative and dialogue are strong elements in Child of Light’s final product, it is the aesthetic which still stands out. The art and ambience of Child of Light feels like a painting, but it is the animated details which make the game something special. Aurora’s hair floats behind her as if she was constantly submerged in water, after finding her first sword she holds it high in the air, only to lose her balance and drop the sword to her side. These small touches take Plourde’s and Yohalem’s magical world of poetry and painting and give the package a touch of humanity and charm. 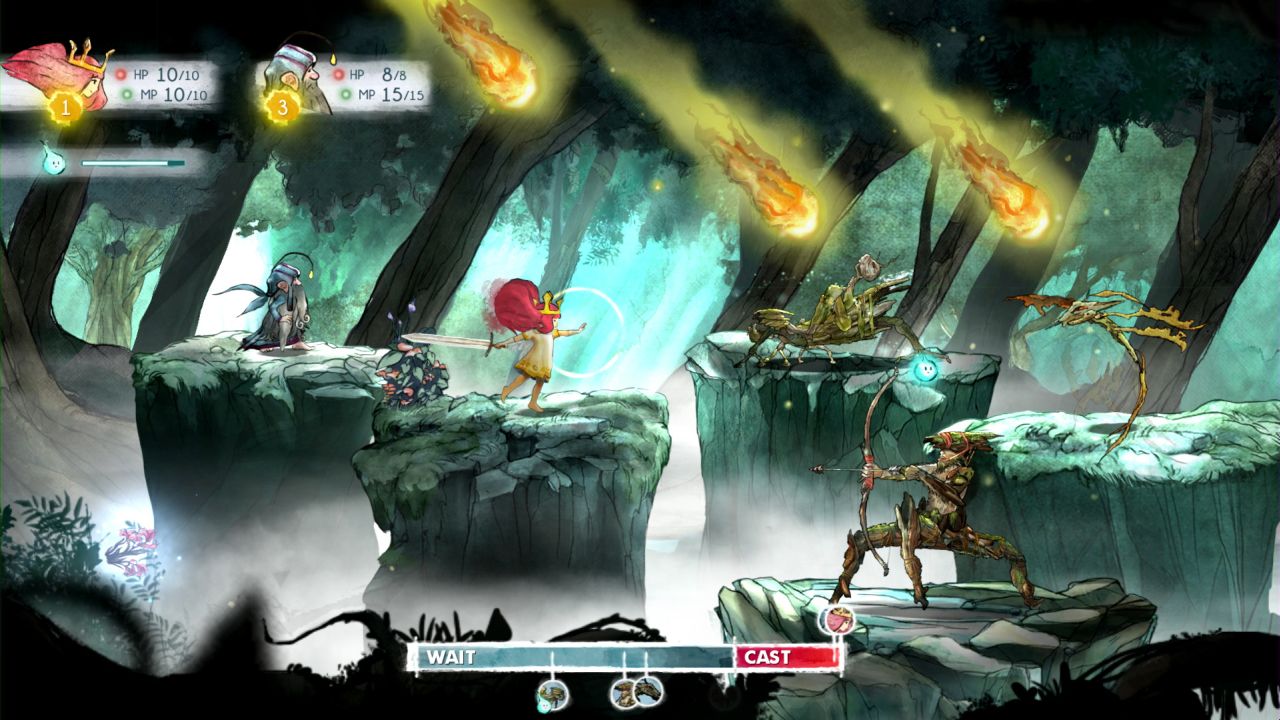 The best part is Child of Light plays as well as it looks. The game has the core elements of a JRPG: it jumps between overworld and combat, it is turn-based, it uses meters and refills them with points; but it also seeks to add its own flavor to the genre. Players quickly receive a companion character, a small light named Igniculus, who can be controlled by a second player or the right thumbstick. Igniculus can be used in the overworld to collect orbs, a task which has a similar feel to gathering Rayman’s Lums, and it can light up, allowing players to sneak behind an enemy and strike first.

Similar to most JRPGs the surprise strike gives you a headstart in the combat screen. When cued to act, players can select an action, spell, or other task to aid them in combat. At the bottom of the screen is a meter used to track player and enemy turns. Icons show each character’s progress toward their next action; you can slow enemies' progression - thus delaying their turn - by directing Igniculus over to them and lighting him up, similar to the overworld. If Igniculus runs out of light he can gain power by collecting orbs which are either floating in the world or hiding in the unique foliage.

Stripping away the meters, Igniculus, and other frills, the combat feels fairly traditional. Select an attack, select an enemy to attack, and manage your health/mana. After vanquishing your enemies you can pick up items and gain experience. The experience then translates into level-ups, which allow you to expand your abilities in the game’s skill tree. Most of the skill tree is straightforward, offering the choices to either improve your health, improve your mana, or get a new attack. Picking up on offense is important, as different attacks are needed to exploit enemy’s weaknesses. 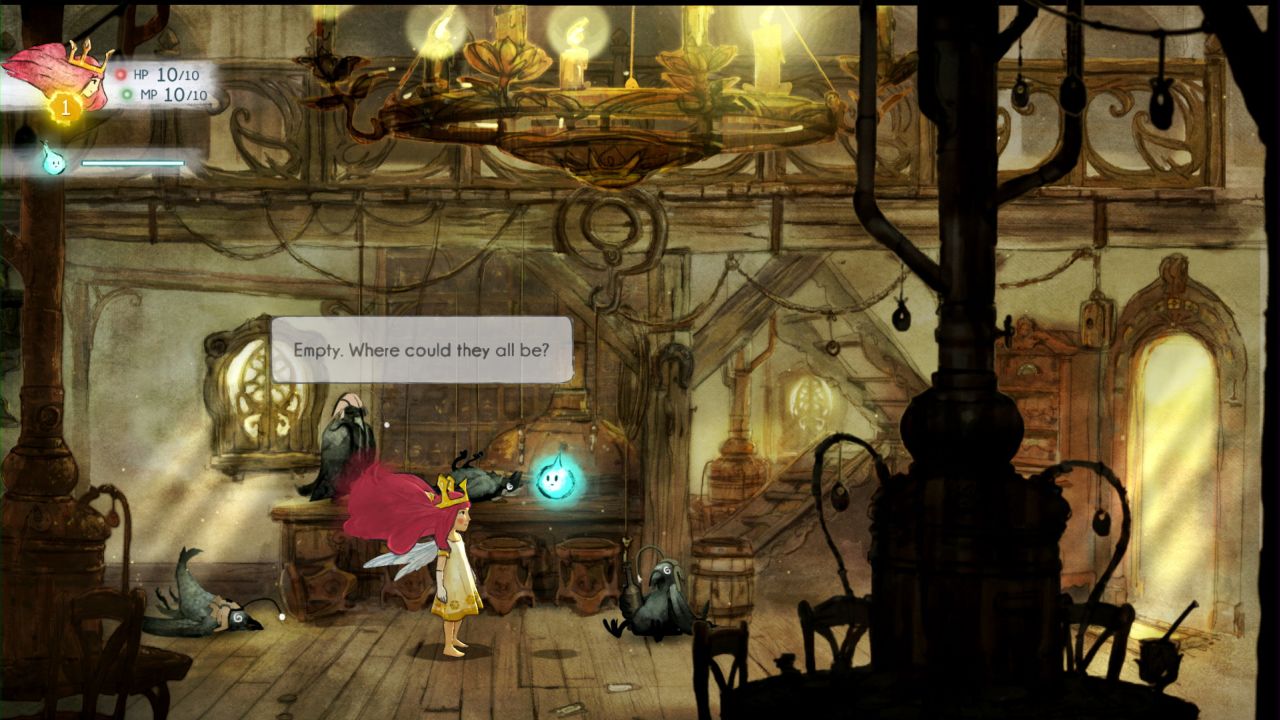 You can also modify your equipment in Child of Light to take advantage of your enemy’s weaknesses. The equipment itself is not interchangeable; you have a sword and other accessories which are constant throughout, but you can modify them with jewels found throughout the game. Equipping a red jewel to my sword I was able to do fire damage with my standard attack, taking advantage of enemies who were weak to fire.

No sooner had Aurora been granted the ability to fly than the demo was over. The time I spent with Child of Light was enjoyable, but merely an appetizer. I wanted more, more of Yohalem’s witty writing, more of the game’s majestic imagery, more of the intriguing combat elements.

Speaking with Yohalem was an interesting treat, as even when you find members of a development team on the show floor, they are often programmers or designers. Yohalem’s insight into Child of Light came from a more artistic perspective, appropriate given Child of Light’s design direction. While chatting with the writer he said something which will stick with me for some time. While discussing how making a video game was unique, Yohalem stated, “I think of film as the democratization of theatre, bringing the Broadway experience to living rooms across the country. I think of video games as the democratization of acting.”

Riffing on that idea, Aurora seems like quite the enjoyable role for players to jump into later this month. Child of Light comes to PS4, Xbox One, PS3, Xbox 360, Wii U, and PC on April 30th.

All videos for Child of Light (6)
Advertisement ▼