New game based on animated film

In the new game, players will need to work as part of a team to keep the Piston Peak Park safe for all of the visitors, hikers and wildlife. Dusty and his elite firefighter friends need help to fight these raging wildfires by scooping up water, hoisting up boulders and calling in the smokejumpers to bulldoze debris.

Players can switch between 8 different firefighting or rescue characters to save Piston Peak Park. With 12 story missions and more than 30 training academy missions to complete, players will operate planes, helicopters and ground vehicles to respond to emergencies.

Disney Planes: Fire & Rescue is available now in North America, Europe and Australia on Nintendo Wii, Wii U and Nintendo 3DS this fall.

Disney Infinity 3.0 Edition
Online
There are currently 0 members and 141 guests on the website right now. Who's On?
Activity in the past 10 minutes: 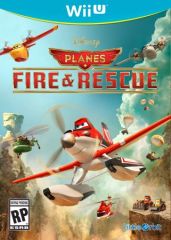