Get the Aion wings emote in Guild Wars

NCsoft is spreading Aion's wings into one of its other popular MMO titles, with a special promotion that will make the pretty people of Guild Wars that much prettier, reports Kotaku.
Players who purchase copies of the Aion Collector's Edition or a first run Aion Steelbook Edition will be treated to a code that unlocks a special Aion wings emote in the free-to-play massively multiplayer game Guild Wars. The wing emote will be bonded to the player's Guild Wars account, meaning that any GW character on said account will be able to break out a pair of wings that Aion players will have to struggle weeks if not months to acquire.
The promotion will only last as long as the first run of the Steelbook Edition of Aion, so if you're interested you might want to get that preorder in now. Aion will be released on September 23rd in North America.
And no, the emote won't let you fly in Guild Wars.

Mass Effect 2
Online
There are currently 0 members and 132 guests on the website right now. Who's On?
Activity in the past 10 minutes: 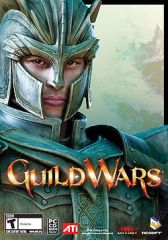