Battlefield 4 gets Dragon's Teeth this month

Dragon's Teeth drops players into four new maps that introduce unique environments and gameplay ranging from the bustling alleyways of Pearl Market to the floating restaurant in the middle of a lake in Sunken Dragon.

The DLC also brings five new weapons making their Battlefield debut in addition to a new unlockable gadget, the Ballistic shield. Dragon's Teeth also introduces a new game mode, Chain Link, a twist on the Conquest mode that sees squads battle to link capture points in order to achieve victory. Fans will also get ten new assignments with unique unlocks and a new Battle pickup in the R.A.W.R., a remote controlled ground vehicle.

Dragon's Teeth will be available to all non-Premium members starting on July 29th. 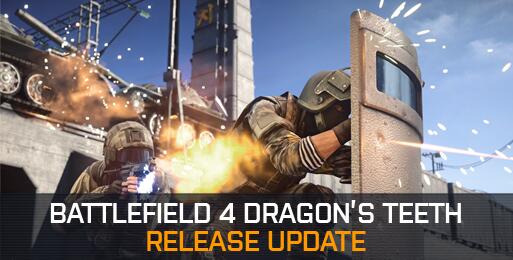 Our Review of Battlefield 4
81%
Great
Reviewed on PC
"A gregarious online experience that demolishes itself and the competition"
Game Ranking
Battlefield 4 (PC) is ranked #385 out of 1687 total reviewed games. It is ranked #39 out of 158 games reviewed in 2013.
384. Zone of the Enders HD Collection
PlayStation 3
385. Battlefield 4

All videos for Battlefield 4 (5)