Previously available only for PlayStation Vita and Nintendo 3DS, the Deluxe Edition offers the same content to console and PC with enhanced high-definition 2.5-D graphics, a new map & hint system for improved navigation and objective tracking, and 5.1 surround sound.

Developed by Armature Studio, the same team behind Batman: Arkham Origins Blackgate for handheld, the game will be released on April 1 on the PlayStation Network, Xbox LIVE Marketplace, Nintendo eShop and Steam for $19.99. 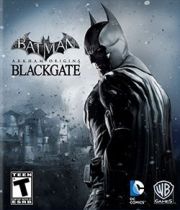