TRANSFORMERS: RISE OF THE DARK SPARK
Platform: Wii U
56
Reviewed on Xbox One
SummaryNewsArticlesVideoScreens

New game to tie-in with the film this summer

In the third-person action game, players will choose from over 40 playable characters from the two different universes as they battle to secure the Dark Spark.

The game will serve as a follow-up to both the upcoming Transformers live-action film and Activision’s Cybertron video games. Players will be able to switch between the Autobots and the Decepticons throughout the single-player campaign. Similar to High Moon Studios’ Cybertron titles, gameplay features fast-paced running-and-gunning combat paired with traversal and vehicle action across open battlefields.

Transformers: Rise of the Dark Spark will be developed by Edge of Reality and release on Xbox One, PlayStation 4, Xbox 360, PlayStation 3, Wii U, and PC. 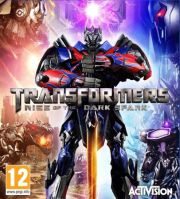 1502. Sir, You Are Being Hunted
PC
Related Games

All videos for Transformers: Rise of the Dark Spark (3)