Rockstar has revealed that the much anticipated release of Grand Theft Auto: Episodes from Liberty City for the PlayStation 3 computer entertainment system and Games for Windows will appear on March 30, 2010. For the first time, PlayStation 3 and Games for Windows players will have the opportunity to experience the last two thrilling chapters of the Grand Theft Auto IV saga.
The two action packed episodes will also be available for download on the PlayStation Network and Games for Windows LIVE on March 30, 2010. Each episode boasts the same detailed and immersive Liberty City we all know and love. Games for Windows - LIVE players can enjoy 32-player multiplayer matches and an advanced video editor, and all fans will have the chance to once again listen to the dulcet tones of Liberty City Radio.
The Lost and Damned is a dark trip through Liberty City’s seedy underbelly as outlaw biker, Johnny Klebitz, fights to keep his gang together as a rift in the gang’s leadership threatens to tear the brotherhood apart. In The Ballad of Gay Tony, players explore Liberty City’s high-end nightlife as Luis Lopez, struggling to balance the temptations of money and vice against loyalties to family and friends. Both episodes feature a slew of new vehicles and weapons, and each episode adds new activities including cage fighting, gang wars and BASE jumping. 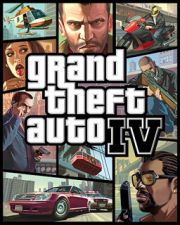 Our Review of Grand Theft Auto IV
87%
Great
The Verdict:
"A game of impressive scope that sets a new bar for the genre, in both it's amazing detail and excellent gameplay. If only Rockstar kept the PC port in the right hands."
Game Ranking
Grand Theft Auto IV is ranked #77 out of 1646 total reviewed games. It is ranked #5 out of 28 games reviewed in 2008.
76. S.T.A.L.K.E.R.: Call of Pripyat
PC
77. Grand Theft Auto IV