Introducing the new look and feel of the classic character

This year SEGA plans to introduce a new branch of the Sonic universe, entitled Sonic Boom, that will debut a new look for Sonic and friends.

Sonic Boom’s visual identity includes character designs inspired by the abilities and unique personalities of each of the characters while still maintaining the core identity and values of the Sonic brand.

The Sonic Boom television series, coproduced by SEGA of America Inc. and OuiDO! Productions, will debut on Cartoon Network in the U.S. and on CANAL J and GULLI in France during the 2014/2015 season. The series is an ensemble comedy consisting of 52 x 11-minute standalone episodes.

Serving as a prequel to the stories revealed in the TV series the Sonic Boom video game promises new collaborative gameplay at its core. Developed in the U.S by California based Big Red Button Entertainment in collaboration with Sonic Team, this is the third title to be released as part of an exclusive deal with Nintendo. Sonic Boom will introduce exploration, combat and a new Enerbeam tether mechanic.

Sonic the Hedgehog first appeared as a videogame character in June 1991. Defined by his super-fast speed and cool attitude, in the years since he first raced on to videogame consoles Sonic has become a true global phenomenon with over 140 million videogames sold or downloaded worldwide across consoles, PC’s, mobile phones and tablets. Sonic Forces
Online
There are currently 0 members and 161 guests on the website right now. Who's On?
Activity in the past 10 minutes: 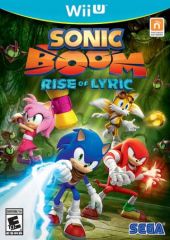 All videos for Sonic Boom: Rise of Lyric (4)