Cranky Kong is a playable character in Tropical Freeze

For the first time in the Donkey Kong Country series, players will be able to assume control of the Cranky Kong. Cranky joins Diddy Kong and Dixie Kong as one of Donkey Kong’s partners in the game.

Donkey Kong Country: Tropical Freeze is the next installment in the series. The new game lets players embark on an original adventure as they battle The Snowmads, who have invaded and frozen their home, Donkey Kong Island. The game introduces a number of new features, such as the ability to swim, a dynamic camera, and the ability to play the full game on the Wii U GamePad controller in off-TV play.

Nintendo also revealed that the game will launch in North America on Feb. 21 in stores and on the Nintendo eShop. 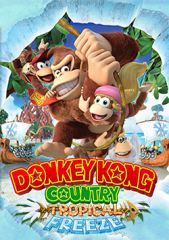 239. The Wolf Among Us
PlayStation 3
Related Games