Also taking place are the StarCraft II World Championship Series Global Final and World of Warcraft Arena Invitational, in which top pro gamers from around the world will be competing for cash prizes. Punk group Blink-182 will be performing a rock concert to wrap up the show on Saturday night.

BlizzCon tickets once again sold out quickly, but anyone can still watch the event from home with the BlizzCon Virtual Ticket. Viewers will receive over 60 hours of live HD coverage of the event (including Blink-182’s performance) across five channels over the Internet. 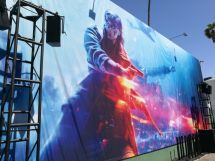