Sony has announced that MLB The Show series will be coming to the PS4 system next spring with MLB 14 The Show. The franchise will also launch on the PS3 and PS Vita systems.

This year's cover athlete was chosen by his fellow players, by the opponents who compete against him day in and day out. Eight-time All-Star, 2012 American League Most Valuable Player, 2012 American League Triple-Crown Award winner, Detroit Tigers third baseman, Miguel Cabrera, will grace the cover of MLB 14 The Show.

For the Canadian retail edition, the cover athlete will once again be decided by a fan vote.

The new version promises a multitude of changes. Beginning with MLB 14 The Show, players can now carry over saves to future versions of MLB The Show, meaning you never have to worry about starting your Franchise or Road to the Show seasons over.

SCE San Diego has created a new Quick Counts option, which utilizes generated pitch counts allowing gamers to play through full games faster than ever. Realistic statistics in this shortened gameplay experience have not been compromised. Users will now be able to play a full 9 inning game in less than 30 minutes, essentially cutting traditional game times in half.

A few of the new features in Road To The Show include a new advancement system, new intuitive player creation process, and all new pre-draft prospect showcase. And of course, the PlayStation 4 version will aim to score big with updated presentation and technical visual improvements. 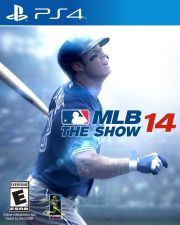