CI Games has confirmed the release of Alien Rage on consoles.

The sci-fi shooter is available today on Xbox Live and will be released on PlayStation Network next week, on October 23.

Alien Rage is a hard-core first-person shooter that will have players facing off against armies of Alien forces.

Enemy Front
Online
There are currently 0 members and 111 guests on the website right now. Who's On?
Activity in the past 10 minutes: 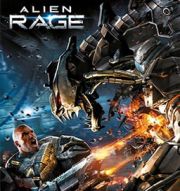